As previously mentioned, during the 1980s the southern Kruger Park boundary was continuously faced with problems caused by lions crossing. into private properties and killing livestock. Once these nomadic lions realised how easy it was to catch and feed on domestic stock, they tended to remain in the area and habitually prey on the animals. Once hunted, they realised that they were safe on the park side and would come through after dark to raid the cattle kraals or kill the livestock in the camps.

Sometimes these young lions tended to show ‘bloodlust’ with such easy pickings and would kill four or five animals in one attack. I realised that the only way of making contact with these killers would be by setting up a hide and waiting for them to return to their kill to feed again. They were always more suspicious when approaching a kill of a domestic animal than one of natural prey, so the hides had to be carefully sited and disguised, and movement kept to a minimum. With care, I could sometimes shoot two or three in a night. If that sounds unsporting, I must stress that it was not sport hunting at all, but an attempt to rid the area of killers causing financial loss to the farmers and the community.

We did try to dart, capture and then relocate some lions further into the park, as far north as the Satara area, but this did not work. Within a week or two, these same lions returned and were again killing stock. They became wary and would not return to a kill, so they then had to be followed on foot from a kill – which could be quite ‘hairy’, especially in the dark. My tracker, Petrus, was very steady in this work and could be relied upon to keep a spotlight trained on the lion, allowing me to pick a shot. For this, I used a rechargeable battery with a spotlight and red filter. Following lion at night through the bush is pretty hair-raising work and shots were normally at close range. 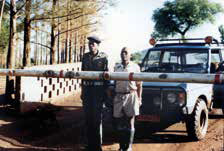 Magagula (left) who assisted me with a lion hunt, with Petrus (right).

I remember one time when Petrus was down with malaria and I used a substitute tracker named Magagula. I had used him on hunts before with no problems, but this tracking in the dark was new to him. I carefully explained what to do and he seemed OK with it. We picked up a group of four young male lions moving back to the park at about 11pm and were following behind at about 15m when the light was switched on and trained on them. One of them stopped and turned to look back. I raised my rifle, ready to shoot – when Magagula’s nerves failed and he suddenly switched off the spotlight. I whispered to him to switch it on again, which he did,

but he simply flicked it on and off! Believe me, it is quite daunting standing in the bush in pitch blackness with lions a few metres ahead. Fortunately, the lions ran off and made their way back to the park. We never managed to catch up with them.

An amusing incident occurred with Magagula a few weeks later. I was driving along the road past the cattle kraals when I noticed something lying across the road. There was Magagula, drunk as a skunk, sprawled on the road with his bicycle beside him. I stopped and, in the headlights, picked up the spoor of three or four lions along the road and all around Magagula. They had obviously seen him lying there and, out of curiosity, sniffed and smelt all around him before moving off again. Fortunately, most lions are not man-eaters by nature and I think these ones were put off by the smell of beer! In his drunken state, Magagula was completely unaware of what had happened. I loaded him into the back of my Land Rover and dropped him off at the compound. The next morning, I collected him and took him to show him the tracks around where he had been lying. I must add, however, that even this did not cure his drinking. 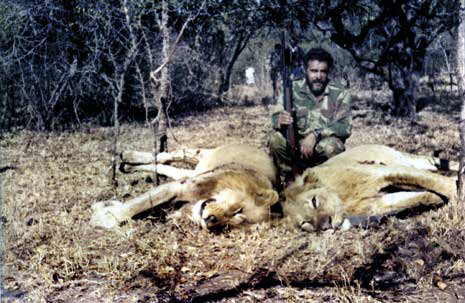 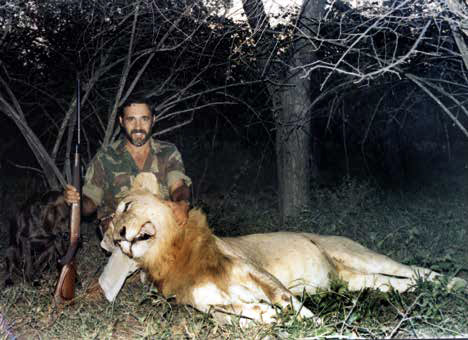 A raider lion taken out.

Most of the lions which caused problems were young males, although occasionally a mature lion or lioness was also a culprit. On two occasions, a large cow was killed and partially eaten. Waiting at the kill brought no results: the lion did not return. From the tracks, we saw that the killer was a large, mature male which had been hunted before and was wary of returning to his kill. The third attempt on a late afternoon was foiled by a tractor driver who arrived at the kraal just as the lion was trying to get into it. The lion ran off and they radioed me to advise what had happened. When I arrived, I saw from the tracks that it was the same lion that had previously made the kills. The tracks were fresh and reasonably clear, and seemed to be heading to the river boundary of the park. Petrus suggested that we cut across and try to get ahead before the lion reached the river. We could then perhaps get a shot. So we set off at a fast pace to make up time.

We arrived at the section of the river bank where Petrus thought the lion would cross, but no tracks were visible. We moved back into the tree line and sat down to wait. It was not too long before Petrus pointed and indicated that he could hear the lion. I trusted his instincts, as he was seldom wrong, so I moved to get ready if I had to shoot. Sure enough, we spotted the lion moving towards us, seemingly unaware of our presence. I took careful aim at his chest as he came forward and as my shot struck him, he seemed to leap up and flip over. I gave him a second shot and he fell flat. This cattle-raider had reached the end of his career. 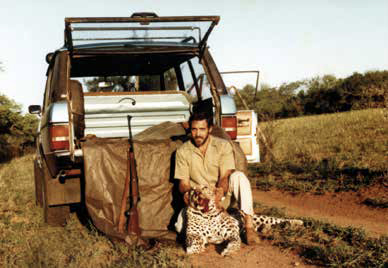 Not long after this, the raids seemed to become fewer, with the lions apparently behaving themselves and although there were sporadic kills in other areas, I was happy to have some respite from shooting more of them.

I would just mention that most of my lion control work was done with a .375 H&H and although it is not a favourite calibre of mine, I found it ideal for cats such as lion and leopard. It did prove effective in having a shock effect on them and knocking them down.