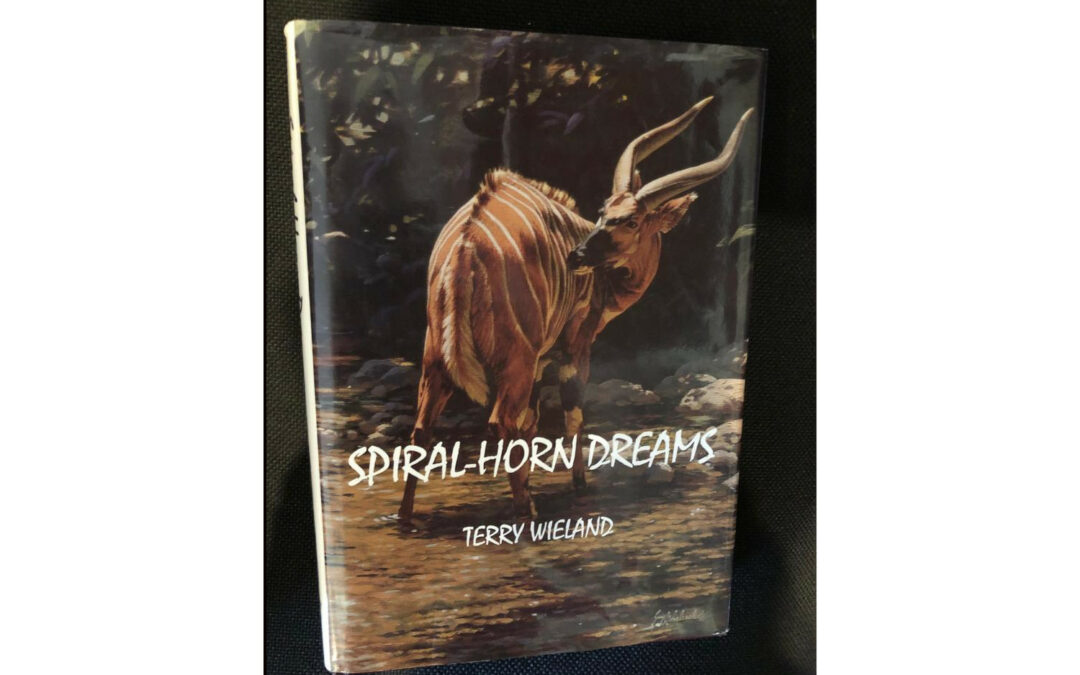 I suppose there’s a certain irony in that finding a copy of Spiral-Horn Dreams is as challenging and frustrating as it can be to hunt the very animals that Wieland writes about. This is a book that’s as elusive as a bongo and as beautiful and perfectly crafted as a mountain nyala.

The first interesting tidbit you discover when picking up a copy is that it’s not, as the title suggests, solely about hunting Africa’s fabled spiral-horned animals. To be fair, however, four of the six primary sections of the book are indeed dedicated to members of the spiral-horned fraternity, specifically to the bongo, the mountain nyala, the nyala and the sitatunga. The final section is broken down into individual chapters on the Lord Derby eland, the Royal sable, Mrs. Gray’s lechwe, the greater kudu and the bushbuck; lesser kudu and common eland are ignored entirely. No, the common thread is not horn shape, but rather those antelope that hold the informal title of being “glamor game.” As to the criteria required for nomination to this esteemed club, Wieland lists rarity, beauty, difficulty in hunting, and “a quality that forces the men who hunt them to take themselves to a higher plane of effort, endurance, determination, and in some case, purest suffering.”

Potentially misleading title aside, Wieland’s talents as a researcher and journalist come to the fore in a truly engaging way. He does a thorough job of educating readers about the relationship between these animals and hunters, taking us from their time of discovery by the hunter/explorers of the 1800s to modern times. As part of this journey, he goes into meaningful detail about Theodore and Kermit Roosevelt’s famed safari, and their experiences with these shy and elusive animals.

The sections dedicated to the four primary species are broken down into anywhere from two to six individual chapters, each an exquisitely written tale chock full of information that provides a greater understanding of the animal than can be found almost anywhere else. It’s compelling and informative reading from start to finish.

Spiral-Horn Dreams is generously supported with black and white photos, maps and illustrations that span the timeframe described in the text. Also included are three interesting appendices. The first is an informal rating of the nine game animals anointed with the glamor game title as evaluated by three well-known hunters: Robin Hurt, Tony Henley and Craig Boddington. Some would suggest that comparing these disparate animals to one another is a little on the tacky side, but I must admit that it’s engrossing in its own way. Who doesn’t like to play the rating game?

The second appendix, titled “Current Status and Statistics,” describes the distribution, status and physical appearance of each species, and its primary subspecies’, along with recommendations for appropriate hunting rifles and cartridges. Additionally, the top trophies for each as compiled by SCI and Rowland Ward are listed, current as of 1993.

The third and last appendix is a bibliography, listing the many and varied sources Wieland used in writing the book. This is an interesting read in and of itself, and provides valuable fodder for identifying other books that fans of African hunting literature should read.

Wieland’s pedigree as an honest-to-goodness journalist is worth its weight in gold here; it’s what separates him from the vast majority of today’s outdoor writers. I suspect that’s why copies of Spiral-Horn Dreams are so hard to come by; it’s one of those books that you won’t pass along to friends to read for fear of never seeing it again.