The Livingstone eland, Taurotragus oryx livingstonei, is found in Angola, the northwest tip of Namibia, the Caprivi Strip (now Zambezi Region), Botswana, Zimbabwe, and Mozambique. It has been introduced into South Africa where it’s not unusual to see it grazing alongside the common, or Cape eland. There are some visual differences between the Cape eland and the Livingstone eland. If you are going to hunt Livingstone eland, you need to be aware of these differences. The Livingstone eland has larger, more massive horns than its cousin. It is physically larger than the Cape eland, and its vertical stripes on its rump are more defined and slightly wider. So there are definite differences, but in truth, the differences are largely due to geographical distribution. Living isolated from other eland species will have led to small differences in the population. Horns may be larger, or smaller, body markings can be altered. Actual body size can change due to climate, food source, or lack of it, and general habitat. The hide can change color depending on age, climate, or location. The largest antelope in Africa is one of the most nervous and skittish. It will flee any source of perceived danger, and is capable of running for many hours at a sustained speed of 40 miles per hour. It can jump a six-foot tall obstacle with ease. You have to be quiet and careful when stalking. The Livingstone eland can weigh over 2400 pounds and stand sixty to seventy inches at the shoulder. Both sexes have spiral horns with large bases. The male’s horns grow to four feet in length; the female’s reach about half of that. They consume a large amount of food, mostly during early morning hours, or late afternoon when the heat has died down a bit. They will feed at night. They prefer grasses, tree leaves, fruit, and bushes. They generally forage in open areas. They will travel great distances for food. They will follow the seasons, arriving at a new feeding ground when the fruit and flowers are in bloom. When water is available, elands will consume a great deal. However, during the dry season, or times of drought, they can go a long time without drinking.

Herds usually run between 15-25 animals, although there are large groups of females and calves that gather together during the rainy season. Even though there might be any number of males in a herd, there is only one dominant Livingston eland. The male elands will fight over dominance. They feel out each other’s horns, touch heads, then push as hard as they can. They don’t use the horns for thrusting, except when fighting off a predator. Dominant male elands may mate with multiple females. They will chase off any other male that tries to pull a female from the herd bull. Calves are born mainly from August to November. The mother eland will hide her offspring in the bush rather than stay with it. Calves are weaned at six months. They will join up with other calves and form a juvenile herd. Mothers stay with this herd for a few months then go off to form a separate herd. South Africa has two species of eland; the Cape, or common, eland, and the Livingstone eland. They cross breed and 100% pure Livingstone or Cape elands are fairly rare these days. The Livingstone carries a higher value than the common eland, as is reflected in the price to hunt Livingstone eland in Africa. The common eland trophy fee could be as much as 50% less than that for the Livingstone eland. Livingstone elands aren’t particularly aggressive but are well muscled and powerful. Wounded, they can be quite dangerous. Also, if the shot isn’t fatal, the eland can cover a great number of miles before going down. The side shot is usually preferred. Put your crosshairs on the shoulder and try to break the shoulder bone. The eland won’t travel far before going down. The eland is a very large animal at considerably over 2,000 pounds in some cases and can take a great deal of killing. Bullet placement and the use of properly constructed bullets is absolutely critical and certainly takes precedence over caliber.

However, caliber counts. Some hunters prefer one of the .30 caliber rifles with heavy for caliber bullets of 220 grains. The .30-06 has been used successfully on eland, but anything smaller should be avoided. Yes, a head or spine shot with a smaller caliber will drop an eland instantly. If you are off, though, you will be in for a long walk. Preferable calibers include the .338 Winchester Magnum, the 9.3x74mm, or the .375 H&H. All should have a good expanding bullet like the Swift A-Frame. Seven Livingstone Eland Facts [/vc_column_text][vc_column_text]

One thing to know when you hunt Lord Derby eland is that you are hunting the largest antelope in Africa. The Lord Derby, or giant eland, Taurotragus derbianus, stands six feet at the shoulder and weighs upwards of 2,200 pounds. The females are smaller, topping out at 1,300 pounds. Both sexes wear spiral horns. The male horns reach four feet in length while the female’s top at two feet. The Lord Derby eland is a herbivore, consuming leaves, foliage, branches and grass. The animal forms herds of both sexes numbering up to 25 antelope. The giant eland is only slightly larger than the common eland, but is called giant because of the size of its horns compared to the common eland.

The Lord Derby eland isn’t territorial, and wanders over a wide range. It is found in Cameroon, Central African Republic, Chad, Democratic Republic of the Congo, Guinea, Mali, Senegal, and South Sudan. It is an alert animal, and difficult for a hunter to approach. (Lord Derby was the Earl of Derby, an English title created in 1139 AD.) The giant eland can run at speeds up to 44 miles per hour and do it for hours. Mating can occur throughout the year, but mostly takes place during the wet season. Females reach maturity at two years, males at four to five years. Gestation period is nine months after which a single calf is born. The calf stays with the mother for up to six months, when it will join a group of similar young elands. Giant elands are primarily nocturnal. They have vast permanent ranges and settled seasonal migration patterns. Eland herds usually contain 15-25 antelope and last for a year. During daytime hours, eland herds rest in shady, sheltered areas. Lord Derby eland males are wary and hard to approach. In times of danger, the male will bark at the herd until the whole herd is up and running to safety. Giant elands are exceptional jumpers and can clear a six foot obstacle with ease. Some of their primary predators are lions and hyena packs. Sickly or young elands are in danger from leopards and wild dogs. The mature, heavy, large-horned eland bulls can be hard to take down, even by a lion pride. 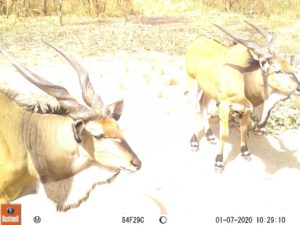 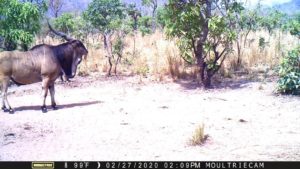 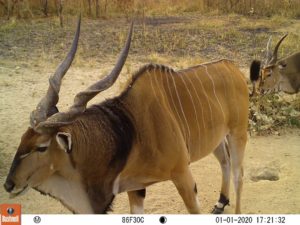 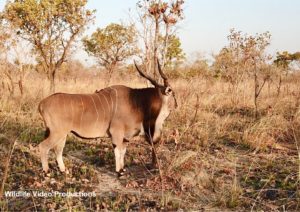 The giant eland’s habitat is the savanna, woodlands, and brush of Central and West Africa. They can also live in very dry climates and deserts. The eastern giant eland is found in extensive areas, and is listed as “Least Concern”. The eastern population of giant elands is thought to be around 15,000, of which 12,500 are in the Central African Republic. Concern for the future of the eastern giant eland is based on the numerous conflicts in the general area. The western giant eland is listed as Critically Endangered. Around 1,000 western giant eland inhabit Senegal. Seven to eight hundred are in the Niocolo-Koba National Park near the Guinea-Bissau border. The balance of the elands is in the area around the Faleme River. Only a few giant elands live in nearby countries. The major threats to the giant eland are overhunting for meat, and habitat destruction caused by increasing human and livestock populations. The decline in the western eland population is being studied in some game preserves. There are around 100 giant elands in semi-captivity that are undergoing a breeding study that shows the annual population increase to be around 130 eland. With proper management of the captive animals, the western eland numbers could increase. You hunt giant eland during the months of January, February and March when the animals are at their peak. They are preparing for the breeding season and their necks have swollen up and their hide is in excellent condition. Giant eland hunting usually requires active pursuit. These animals don’t hang around very much. They are skittish and will take alarm if anything disturbs them. Almost all hunts will involve the hunter spending a goodly amount of time on foot. You can use the safari truck to drive roads early in the morning to search for giant eland tracks, providing there are roads where you are hunting. Once the spoor is located the hunter must get on the track and run them down at a good rate of speed. Eland don’t use roads, so sometimes you must track them far into the bush, far from the camp, truck, or warm shower. This could take days. 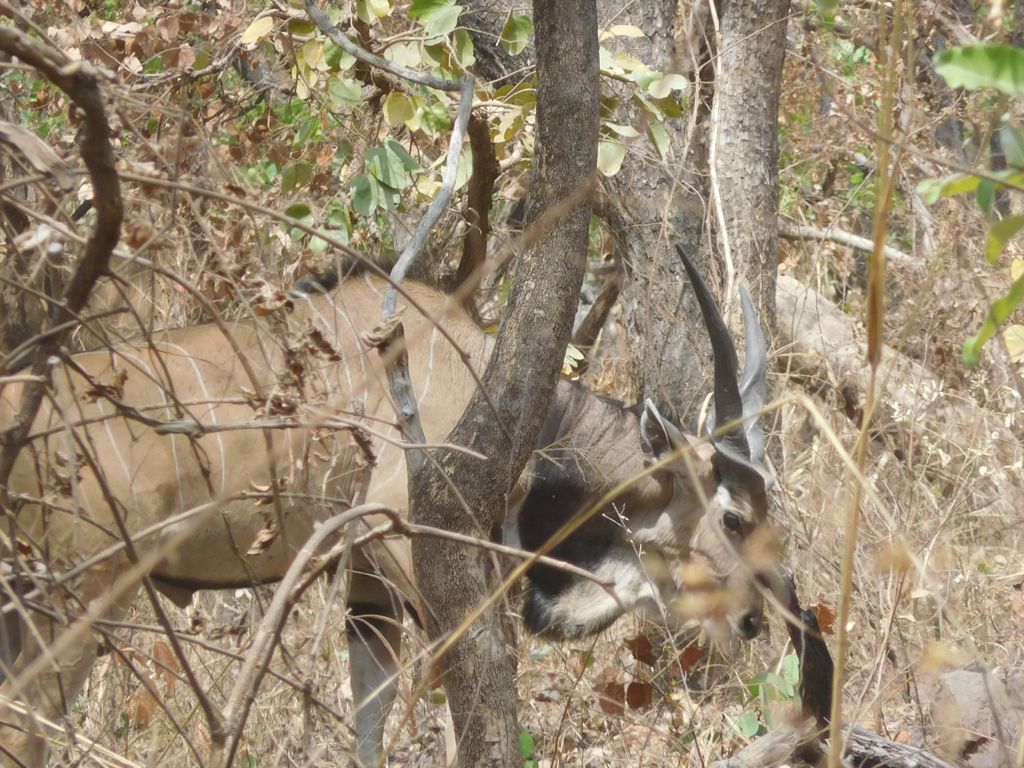 A good caliber rifle to hunt Lord Derby eland is the 9.3x74R with 286-grain bullets. Another choice is the tried and true .375 H&H with .300-grain bullets. You can hunt with smaller calibers, but you want the animal to go down fast. A wounded eland can be a long, drawn-out process to track. Seven Lord Derby Eland Facts 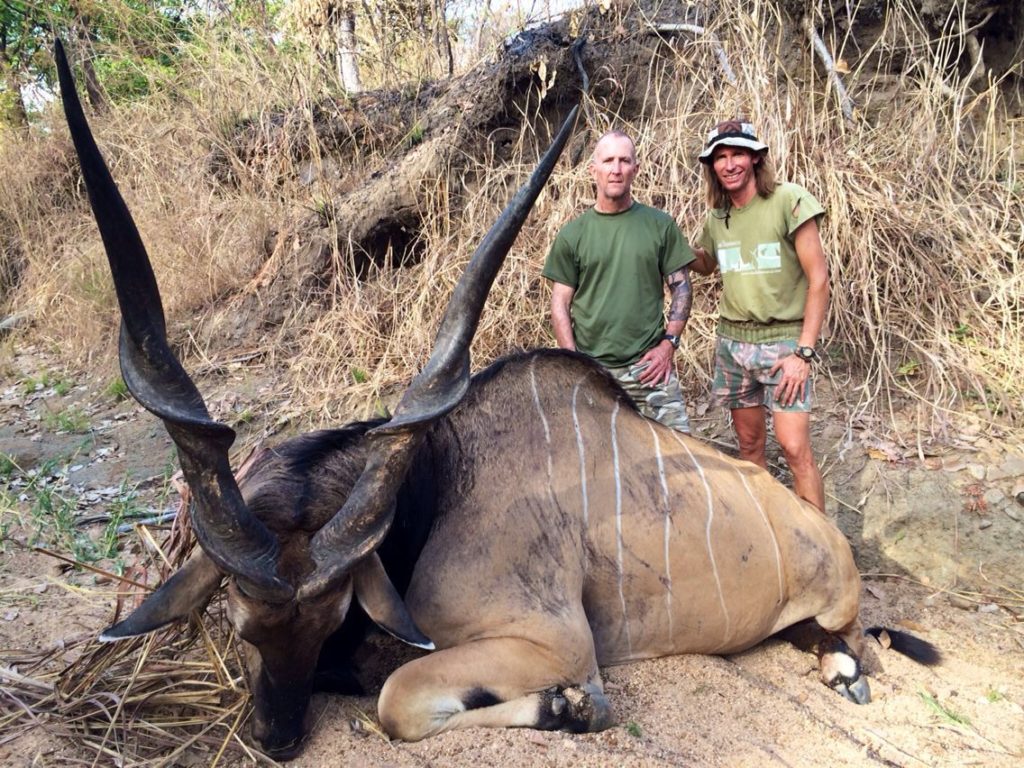