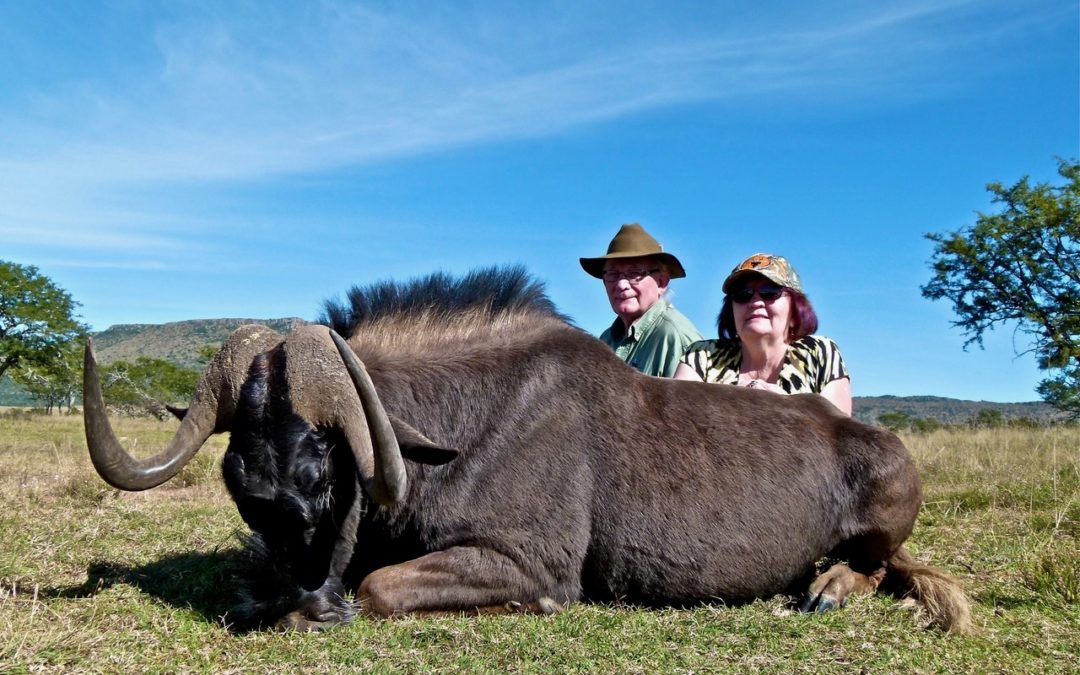 I was born in Edmonton, Alberta Canada in 1945. I guess that makes me a city kid, but we were never far from the country. Although Edmonton is home to almost 1.5 million people today, it was only 100,000 when I was growing up. When walking out the back door we were soon in the woods with a lot of small wetlands. Birds and small mammals were abundant. Many of my relatives were on the farm. My family spent a lot of time outdoors, hunting, fishing and camping. We were always learning new outdoor skills.

I have a Master’s degree in physical geography. My career of 40 years was committed to parks, land use planning and conservation – things I loved. I often joke that I never did get a job. In 2010, I reconnected with Carole, a friend from university days and we soon married. Carole, a true city girl had never participated in any of the outdoor activities that were part of my life. She was keen to try them all and learnt to shoot, and once we decided to visit Africa, she was committed to getting a zebra. Our shared love of Africa has resulted in five visits so far!

My first African animal was a good oryx in Grootfontein, Namibia, 2012

My fascination with Africa started when I was a child. I broke my collarbone when I was five and was taken to “Doc Cameron” who practiced from his house. His walls were adorned with spears, shields and other memorabilia from his time in Africa. I couldn’t take my eyes off the pig with the big teeth. In 2011, Carole and I had a chance to join a tour through Namibia prior to the World Veterinary Congress that my brother was attending in Cape Town.  I fell in love with the landscapes that were new to me. Alberta’s landscapes are young, the result of glacial action. The province was covered in ice until 10,000 years ago. In Namibia I was seeing ancient landscapes, the result of the action of wind and water over millions of years. I was experiencing landscapes that I had studied in geomorphology at university but had never seen. Watching and photographing wildlife in Etosha National Park, I was hooked. On our four subsequent trips we hunted different areas in part for the different landscapes. We added a tour of the Garden Route in South Africa and visited the diamond mine and Boer Museum near Kimberly. How can I forget walking with the lions on my 70th birthday? A houseboat on the Chobe River in Botswana and Tiger fishing the Zambezi River were fabulous experiences. Victoria Falls was awe-inspiring. My love of Africa includes the scents – The Kalahari Bushveld, the smell of flowers after rain, the aroma of Sand Camwood. If the early morning smells of the camel-thorn dotted savannah grasslands near Kimberly could be bottled they would put the final touches on any trophy room!

I think hunting was in my blood. Dad and my uncles were hunters. In the days before television, storytelling was an important part of socializing. As a kid I would listen, enthralled by the hunting stories of my elders.  I wandered the fields with Dad or sat in the duck blind before I started school. I was allowed to skip school for a few days when I was about seven. What a thrill to sleep in a wall tent in winter with the wood stove for heat. Though horses were no longer used on the farm, one of the uncles kept a team for the annual winter hunt. I vividly remember riding in the sleigh behind the trotting horses with the bells jingling.  After that I was hooked and could not get enough.

This is my caracal with the roundsmen, East London, 2015

In New Zealand we hunted chamois in the Lake Hawea area north of Queenstown and Himalayan tahr at Rata Peak, west of Christchurch. In the U.S.  it was pronghorn in eastern Wyoming.

In Canada I have hunted extensively in my home province of Alberta over the past 60 years. Extended horse trips in the roadless areas of the Rocky Mountains were especially enjoyable, and we hunted mountain goat in the rugged coastal mountains of northern British Columbia near the Alaskan border. Our quest for caribou took us to the fringe of the tundra in the Ungava Peninsula of northern Quebec, while Great Bear Lake on the Arctic Circle in Northwest Territory was our destination for musk ox.

I had my favourite weapons, but on my African hunts I used the rifles that the outfitters provided. I shot .300 Winchester, 7 mm Remington Magnum, .300 Remington Ultra Magnum, .300 H & H and .375 H & H. All were bolt action and mounted with good scopes. I particularly liked the pre ’64 Winchester in .300 H & H, a bit heavy to carry but very steady on the sticks. In Canada I am old school. I only own one rifle, a Remington Pump action in .30-06 Springfield. I had a 4X Weaver scope for most of my life. A few years back I traded it for a Bushnell 3 -9 variable. I won’t say I traded up, as the Weaver was an excellent scope, but as I get older the higher power is occasionally helpful on longer shots. I currently shoot Hornady Superformance 150-grain SST bullets. With the higher velocity there is little need to correct for elevation under 300 yards.

My favourite African animal to hunt without hesitation is kudu. Following Joseph, a Bushman tracker, across the old sand dunes of the wooded Kalahari Bushveld in Northern Namibia was an experience like no other. Finding the track of a large bull, Joseph would unravel the trail even when it crossed paths with a herd of other animals. It was amazing. The “Grey Ghost” is a truly elusive animal; at times, Joseph would have us sneaking slowly, at other times almost running to try and head off a bull that we had not yet sighted. We occasionally saw horn tips, though seldom got a good look, but after days of getting close, and not connecting, what a thrill to finally outsmart one.

I couldn’t choose any particular trophy as my favorite – all rekindle memories of experiences, landscapes and adventures with the people I hunted with. In terms of my African trophies, the Eastern Cape kudu with its beautiful markings and long flowing mane is perhaps the most impressive on the wall. The musk ox from the Arctic Circle is a magnificent animal and I am still partial to the Rocky Mountain bighorn that I had mounted over 50 years ago.

Fortunately I don’t think I have had a close brush with death while hunting; danger perhaps. There were some tense moments when I shot my Cape buffalo. I got two good shots into a bull before he got into a herd of about 30 animals. They moved only a short distance and stood facing us. Several of the Dagga Boys had blood on their noses from rubbing on the wounded bull. As we got closer, looking for a final shot, the herd continued to stare us down; they had no intention of moving. At about 100 yards it seemed like a bad idea to get closer in the hopes of getting them to move. I was well aware that we were a long way from the trees. There wasn’t even a shrub big enough to try hiding behind. I got an open lane and finished the bull off. The others stood their ground. They did not move for the 20 minutes we waited while someone went for the bakkie and drove in their direction. I had three PHs backing me up and was not worried; perhaps I should have been. I have no idea what would have happened if the wounded bull or the others decided to charge as I have often read they do. Perhaps ignorance is bliss. 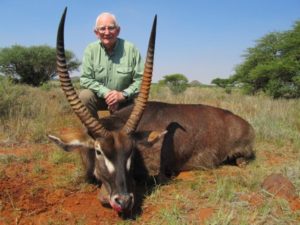 I would suggest potential hunters not to be deterred by areas with high fences. The properties are large and the fences never come into play. There is usually far more habitat to hunt than in the unfenced areas that are typically hunted in Canada. Consider using the taxidermist recommended by your outfitter. Even with the cost of shipping, they are competitive with prices in Canada and you get your trophies much sooner. I have used three different taxidermists in Africa. Their work compares favourably with the taxidermist I use in Alberta who has “World Champion” behind his name.

My advice to any first-time hunter is to be flexible. On your first safari pick a hunting package with a variety of animals where the company is prepared to trade for others. You may well change your list when you see some of the animals. Pick a longer trip rather than a short one. There is always a lot more to do around the lodge than hunt. Make it a family affair and don’t forget the side trips; Africa is a diverse and wonderful place. Adding a few extra days helps to defer the cost of the long flight. Pack light. With daily laundry you don’t need many changes of clothes.

And last, but not least – try not to leave your African adventures until you retire, like I did. You will want many years for return trips.