An encounter with black-backed jackals 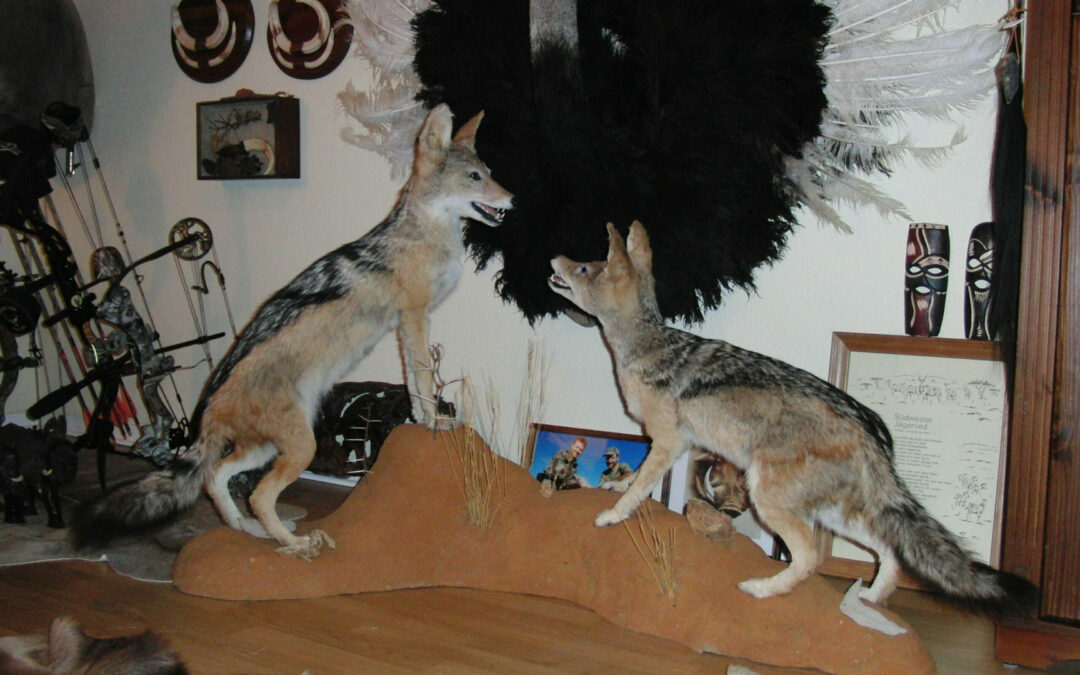 It is 4 o´clock this morning when my alarm clock jolts me out of my sleep, my dreams, and makes me aware to get up, take a shower, and slip into my Sniper Africa Camo clothes. Outside it is still dark, quite and peaceful when I close the door of my nice and cosy room.

We have reached the end of August and I am luckily back to Africa, staying on a wonderful family-owned farm called Okapunja in Northern Namibia, close to the Etosha National Park. Around the house, under the lapa, I meet Gustav, my Professional Hunter and a real good guy. After a quick coffee and some homemade cookies, we are heading out into the bush in this old almost indestructible Land Rover.

The windshield is folded down so we can feel the fresh morning breeze on our faces and smell the nature around us although we smell more the unburned fuel from the old “Landy”. We park the reliable old-timer under a camelthorn tree before we walk the last three-quarters of a mile to our blind through the darkish savanna.

Gorgeous rosy faced lovebirds and masked weaver birds are the morning messengers with their chirps in the bushes around our blind welcoming the rising morning sun. Like the sunsets, the sunrises are always wonderful and especially how immediately the upcoming warmth makes you feel more comfortable. With the light, the first animal visitors – helmeted guinea fowls and doves – show up at the little waterhole.

It is around 6:20 a.m. when all of a sudden the bunch of fowls and other birds run and fly away in a deuce of a stir. What rocked the boat? Two black-backed jackals (canis mesomelas) seem to appear from nowhere, heading straight to the waterhole. What an amazing surprise. I am not only awake now but also really excited. The jackals behave also excited and skittish when they come closer to the waterhole. The younger and smaller one is nudging and teasing his fellow when they arrive at the water whereas the bigger jackal is looking in our direction, checking  if everything is all right.

Gustav and I are both dead quiet and still in our blind. I have my loyal and faithful Mathews LX bow in one hand and the Gold Tip Lazer carbon arrow in the other hand, and through the mesh of the blind I stare at 22 meters (24 yards) that seprate us. Gustav is also standing deadly silent behind the video camera focused the jackals. The big jackal, annoyed with his younger companion, bares his teeth and barks at him. This short distraction gives me  the opportunity to quickly nock my arrow, lift up my bow, and pull it back to full draw. For a moment, the “wild dogs of the African savanna” stand still now at the waterhole and both drop their heads to drink.

This is my one and only chance to put the sight on the vitals of the big male in front. Fortunately, the younger is not standing behind or in front of him and the line of fire is clear when I release the arrow for its deadly mission. The arrow, with the Silverflame 125 grain broadhead, penetrates completely the body of the animal over the left front leg and the jackal jumps up immediately. In three, four, five wild turns, he tumbles around to the right before he expires within seconds, only 10 yards away from where I shot him. No long suffering. The young jackal is completely irritated about what happened and runs around his dead friend twice before he scampers into the bush. We wait a couple of minutes before I sneak out of the blind to pick up the jackal and look for the arrow, which we finally found 70 meters behind the shooting spot. What an experience and unexpected start of the day.

It is two days later when I sit this time with Rudy, the other PH on the farm, in the same blind at about the same time in the early morning. The scene is almost identical to my previous visit. This time the younger, smaller rooijakkal visits the waterhole. He creeps out of the thick bushes to the southeast, moving slightly nervously in a quick pace as he approachs the waterhole. Cautiously he checks the area before he lowering his head for a drink. Once again, the distance is about 22 meters (24 yards) and the jackal is standing a bit quartering towards us.

The spot on the vitals is small but feasible. The jackal is still having a sip when I draw my bow at a snail´s pace and focus on the aiming spot. Slowly my index finger pushes the release and I let the arrow go. It hits him hard, exactly, and penetrates entirely.  Again, the animal swirls around to find out what hit him before he dropped dead within five seconds and five yards distance.

Rudy was astonished how quickly and cleanly this happens with bow and arrow. What an amazing awesome morning again and what a lucky hunter.

Bio: German hunter Frank Berbuir is passionate about the outdoors and hunting – especially bowhunting, which he has practised for more than 22 years. Although he’s bowhunted in several countries, he’s become addicted to hunting in Africa since his first safari in 2004.  Frank is a mechanical engineer and risk manager in the automotive industry.