My First Double Rifle – A Proud Moment and Then…

Having purchased and used my SAKO .375 H&H on a number of hunts, the gleam soon wore off. It was a bitch of a gun to shoot. It was far too light and kicked like a mule. The stock developed a crack behind the top of the action, and I think this was the underlying cause of my dislike of the .375 as a calibre. I have owned several .375s since, but have never taken to the calibre.

Having hunted in Botswana, I had a hankering for a double rifle for my big game work. Searching around, I found a used Army & Navy in calibre .450 Nitro Express at Groeneveld & Hicks in Pretoria. The gun was in good condition and was priced at R300. This included 100 rounds of soft and solid Kynoch ammo. I went to look at the gun three or four times to convince myself to spend so much on a second-hand firearm. At that time, a new BRNO in .375 or .458 cost about R90. Eventually I bought the gun and became the owner of a genuine African hunting rifle, a heavy calibre double. I considered myself in the league of Selous, Selby, John Hunter, Hemingway and other greats.

The gun handled and grouped like a dream, the way any British thoroughbred should. It performed well on a few wildebeest and on one or two buffalo – and then came the fateful hunt when I had to face my first buffalo charge. (Details of that particular hunt can be found in the chapter titled ‘Facing Charges’.) Briefly, I was following a buffalo wounded by another hunter in the party when a second buffalo charged at close range. The first shot in the chest did not even stagger him; I thought I had missed. The second shot took him under the eye at about 8m and he dropped almost at my feet. This shook me and I decided then and there that I needed a heavy calibre. I decided to have the gun re-blued and cleaned up to sell at the best price I could get. When I collected the gun from the gunsmith, I was horrified to see the action polished to a shiny silver finish. Taking the gun to the range, I could not hit the target at 25m. The barrels had come loose in the blueing process. These had to be resoldered and regulated. That was the end. The gun was sold and I was on the look-out for a ‘heavy’ double.

A few of us like-minded souls used to gather at lunch time for a chat and coffee at a shop called Safrics in central Johannesburg, where we could ‘chew the fat’ and discuss topics of interest, normally about guns and hunting.  One afternoon a farmer dropped in and joined our group. He mentioned that he had an old ‘elephant gun’ which had belonged to his grandfather, who hunted in Northern Rhodesia (now Zambia). Stories like these often floated around. I asked about the gun, but he could not give much information. He said he thought one could no longer get ammunition for it. When I asked about the make, he said it was not a good one – something about it being ‘made in Holland’. But it was, he said, a ‘groot geweer’. My ears pricked up! He said if I was interested, it was at his farm.

We jumped into our cars and I followed him to his farm in Ventersdorp. After introductions, his wife went to make coffee. He disappeared into a storeroom and eventually came out with a rather bedraggled and well-worn leg-o’-mutton case. I sat on tenterhooks as he pulled out a rifle wrapped in swathes of cheesecloth. Imagine my surprise when, finally unwrapped, out came a Holland and Holland .577 NE which was well used, but still in excellent condition. We discussed the price, but he had no idea what it was worth. He felt that his grandfather’s 7,9mm Mauser was a far better rifle. After a bit of bargaining, he said he needed about R500 to fix his tractor and asked if that would be acceptable. I knew the gun was worth a lot more and, being ‘Honest Abe’, I offered him R800. He thought this Jo’burg ‘laaitie’ was nuts! However, a deal was struck. He went into the bedroom and came out with a brown paper bag containing about 150 rounds of ammo to go with the gun. We parted ways, each of us a happy man. I now had my genuine heavy double rifle.

As with most love affairs, the bloom soon faded. I used it over three seasons and everything I shot dropped as well as it should and the recoil was manageable, as the balance and weight were well distributed, but that was where the problem lay: the weight. At about 12 pounds (5,4kg), it was simply too heavy for me to carry on daily hunts. I had to have a gun-bearer to lug it along, and I dearly like to have my gun in hand when hunting. I received a good offer for the gun from a collector from Pretoria and decided to part company with the Holland. This left me with a pending safari and no heavy rifle. A friend offered me his .404 Jeffery to use. Reluctantly, I accepted, though I felt the calibre was too light – but the gun handled like a dream and did everything I asked of it. I wanted to buy it, but my friend would not part with it. I then realised that bullet placement was everything and the .404, together with the .450/.400 as a double, became my favourite calibres and served me well over all the years. I have had guns in calibres .458, .458 Lott and .460 Weatherby, among others, but have kept returning to the .400 as my preferred calibre. I shot this calibre well without having to worry about the mind-blowing, shoulder-thumping recoil. This also allowed me to place my shots with accuracy and confidence.

The lioness was hungry and tired and had travelled further from her two cubs than she should have, but game was scarce and she knew she had to find prey to keep herself and her young from starving. The scent of impala was faint, but unmistakable and seemed to be coming from her left as the breeze drifted towards her. Carefully she started stalking, ever vigilant for any change in the wind direction or movement ahead. In front of her was a small patch of thick, stunted combretum scrub and she cautiously moved through it along a narrow, winding game path.

Suddenly she felt a tightening sensation around her waist. As she moved forward, it became tighter and stopped her in her tracks. The more she tried to move forward, the tighter the feeling around her waist became. Pain was starting to cut into her. The cable snare – placed along the path by poachers for hippo or other animals coming up from the waterhole – had trapped her. She grunted and growled, pulling forward, then back, but it made no difference. Her growls became louder and her struggles more panicked, but she could find no relief. Exhausted, she lay still for a while, trying to see if the tightness and pain around her waist would go away, but it did not.

In desperation, she started rolling and twisting, increasingly tightening the wire around her body. The poachers who had placed the cable snare across the path about two months before had never returned to check their traps. They had collected enough meat off other snares and no longer cared about the other ones left in the veld, far from their camp. Any animal caught in those traps would suffer and die an excruciating death, becoming an easy meal for vultures and hyenas.

Already feeble from hunger, the lioness became weaker in her struggles to loosen herself from the cable. The pain was becoming unbearable. With a last desperate twist and roll, the rusted cable broke off where it was anchored to a tree stump and she found herself able to move. The wire was still cutting into her body, but she was no longer stuck in one place. During the noise of her struggle, the impala had moved away, alerted by her painful roars. She had to find some prey, but in the weak state she was now in, it would not be easy and the piece of wire cable dragging behind her hampered her movements.

The young ranger was patrolling along the riverbank, checking for signs of poachers and any illegal activity in his designated patrol area. He had been walking for hours and was hot, tired and thirsty, his concentration waning. He was not paying attention to his surroundings and his eyes were on the path ahead. It was already late afternoon and his thoughts were on the cold beer and comforting fire waiting for him at his camp. The sooner he could complete this section of his patrol, the sooner he could turn off on the path leading to his camp. He was completely unaware of the animal in the grass ahead of him.

The lioness lay panting from her exertions as the first faint scent of man came to her. Alarmed and frightened, she lay still with nostrils flared, listening and trying to pinpoint where the smell was coming from. Though the pain in her body was severe, there was nothing wrong with her nose and her hearing was acute. The scent became stronger and she picked out the sound of footsteps and leaves crackling underfoot. Carefully she moved away, trying to avoid the approaching human. However, with the wire cable dragging and catching on the undergrowth, she found it difficult to sneak away, so she moved onto the more open game path. As the sounds drew closer, she shifted into the grass on the side of the path. At that moment, the ranger decided to leave the path he was on and cut through the tall grass to his left, taking a shortcut to his camp on the riverbank.

Hearing the change in the man’s direction, the lioness realised that he was now coming directly towards her. Trying to get away, she moved a few metres, but the cable got stuck again, bringing her to a halt. She crouched down… waiting.

The ranger’s eye caught a movement. He stopped to look and listen for a few seconds, thinking it may have been a duiker or steenbok dashing away from him. Hearing nothing, he started walking again, still heading towards the lioness. Feeling threatened, her instincts took over and she launched her charge. The speed and force of her attack jerked the cable free of the bush where it had been hooked.

Hearing a grunt, the ranger instinctively raised his rifle, thinking it might be a warthog, but with growing alarm, he saw the grass parting and flattening. Something was coming directly at him. Whatever it was, it was bigger and more threatening than a warthog. Unable to see over the long grass, he made a snap decision and scurried up the side of a termite mound directly behind him to give him some height.

As the lioness’s head broke through the grass about 4m away from him, he fired instinctively from almost point-blank range without aiming properly. Fortunately, his bullet found its mark, dropping the luckless animal in her tracks.

When the ranger examined the lioness, he noticed that she was whelping, her teats swollen from suckling. His heart went out to the poor cubs which would now starve to death or become prey to some other carnivore or scavengers. With a heavy heart, he took a few photos for his report on the incident and continued back to his camp.

Walking along, his thoughts still with the poor lioness and her cubs, he again realised that Mother Nature is cruel enough without further help or interference from man. 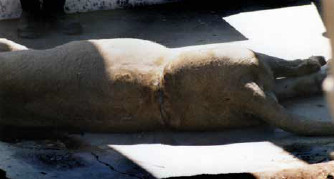 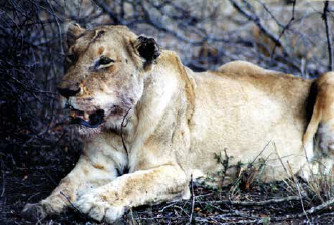 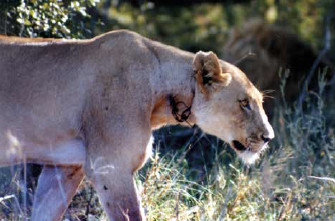