During my bush life, I have always been very careful when dealing with animals that can hurt me, so it is not too often that I find myself in a sticky situation. Once, on a Botswana hunting concession known as Khurunxaraga bordering to the west of Chief’s Island in the Okavango, I found myself hunting with two friends whom I shall call Chris and Vic. It was a hunt that almost ended in disaster.

Chris was the managing partner of a safari operation in Botswana and Vic was a Johannesburg businessman and gun collector. We had taken a general game licence each and two supplementary licences for buffalo. This was in the good old days, when it cost R50 per buffalo. Vic was carrying a Holland and Holland Royal 500/.465 which he had recently bought and wanted to use on his buffalo. He had some packets of Kynoch ammunition that came with the gun. I had my .450 NE Army and Navy double, and Chris had his .375 H&H. More than enough firepower. Against my better judgement, Vic insisted that a tracker we had employed in Maun, whose abilities we did not know, carry a .404… ‘just in case’! We thus set off on our buffalo hunt.

At about 9am, we found fresh tracks at a waterhole and caught up with a group of five bulls in a small clearing. Vic was to have the first shot, so he lined up his Holland. Click… boom! A hang-fire! A bull was hit high on the shoulder – too high for any real structural damage. The bulls turned and ran into the combretum scrub, the wounded one leaving a light, but visible blood trail. Following him in the soft, sandy soil was fairly easy, but every time we caught up with him, he was in stunted scrub mopane or combretum all about chest- to shoulder-high, so all we could see were his legs or sometimes the top of his horns – his vital targets being obscured by the dense bush. He would stand for a while and then run off to another spot. This carried on for a few hours, until everyone was exhausted and very tense. The two trackers had moved quite far ahead and I was on the point of calling them 24 back when a shot went off and they both came running back, shouting that they had shot the buffalo. The tracker with the .404 had spotted the buffalo standing in a partial clearing and had fired at it. 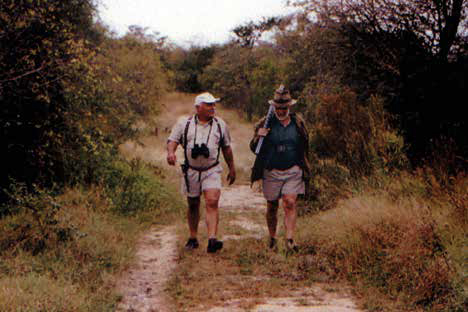 Loot and myself walking through the bush.

On examining the tracks, I found that a second animal had moved in and joined up with the wounded bull – and he was watching our approach. The tracker had shot the wrong buffalo! He could not tell where he had hit it, but there were now two distinct blood spoors. What could more go wrong? We decided to follow the second wounded one, as that spoor was fresher. We had gone about 200m when we spotted the buffalo about 30m ahead. Vic fired and the animal went down, but immediately got up again and turned. Vic and Chris both fired again. The buffalo turned in a circle and dropped, but was not dead and while Vic reloaded, Chris fired again. I was holding my rifle pointing at the buffalo, waiting to see the results of their shots, when I heard branches breaking to my right. The second bull was right behind and charging. I don’t remember aiming my double: I just shot where he looked biggest. My first shot hit him in the chest, but he didn’t even stagger and I thought I had missed him completely. My second shot at about 8m took him just under the eye and he dropped, landing about 2-3m away from me. Fortunately, the first bull was now also down and dead. I had a hell of a job keeping my breakfast down where it should be and had the shakes for about half an hour. This was my second charge, having previously been charged by a leopard. I was becoming a veteran. On later examining the bull, we found that my first shot into the chest had hit the top of the heart, severing the artery, but this had not fazed the bull. He had just kept coming.

I did not handle my third charge with my usual Out of Africa, Robert Redford panache, so I will only mention it briefly. A friend and I were hunting bushpig in the Sabie area of the then Eastern Transvaal (now Mpumalanga). These wily animals only came out of the pine forests and into the banana plantations at night, so we attached a spotlight to a handcarried car battery and went looking for them in the lands bordering the plantations. I was using a borrowed Browning five-shot, auto-loading, 12-bore shotgun loaded with Gevarm aluminium case cartridges in SSG Buckshot.

Our hunt started with Peter, the landowner’s son, and I carrying the guns, one of the farmhands carrying the battery and another the spotlight. Well, the pigs arrived on schedule and the light went on. I fired at a good-sized boar – and then the wheels came off. My shotgun jammed, with the second round halfway in the chamber. The pig adopted a decidedly anti-social attitude and charged – whereupon the battery-bearer dropped his load and headed home as fast as his legs could carry him. 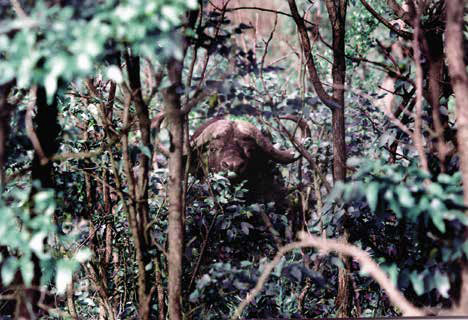 Standing in the dark with a jammed gun and an angry porker rapidly approaching somewhere ahead is not a good feeling. Peter and I did the wisest thing: we fled. I remember running into and through the plantation and then into the pine forest, being slapped in the face by branches, tripping over logs, roots and other unknown obstacles, all the while hearing the angry grunting and snorting of the enraged pig somewhere in the blackness behind us. Not a good feeling at all. We eventually lost the pig, by which time I had also lost Peter. At this stage, I was also totally lost, not knowing where I was in the forest, nor in which direction the farmhouse lay. I spent a very uncomfortable night, freezing and.  thoroughly miserable, waiting for daylight, before I could find my bearings and take the. long walk home. Needless to say, I have never owned another semi-auto shotgun or rifle since, although I still enjoy hunting bushpig when I get the chance. We hunters never learn.

During the mid-1980s I was doing game control on an estate near Malelane, bordering the Kruger National Park. Early one morning I was asked to look for and ‘sort out’ a buffalo 26 which had developed a nasty habit of chasing the workers. Alec van der Post, a nephew of Sir Laurens van der Post and a professional hunter, who was visiting at the time, wanted to share the hunt, so armed with my .375 and his .416 Rigby, we set off to look for the rogue. Petrus, my tracker, found the spoor leading from a banana plantation into a vlei of dense. reeds. The tracks were fresh and we carefully followed the spoor into the reeds. Alec and I kept our eyes on the vegetation, while Petrus tried to determine which way the buffalo was heading. The wind was constantly changing, but we had no choice but to keep on the tracks. Suddenly the bull snorted ahead and broke into a run, deeper into the tangle of reeds.

Petrus then climbed a small tree to try to see what was ahead and indicated that he could see the bull. We slowly inched our way forward for another 10-15m when Petrus again spotted the bull, but we could not make out where he was. Petrus threw a piece of wood towards the buffalo, which again ran off to the left of the faint pathway. We heard him moving and then… silence. The buffalo had stopped and was waiting. 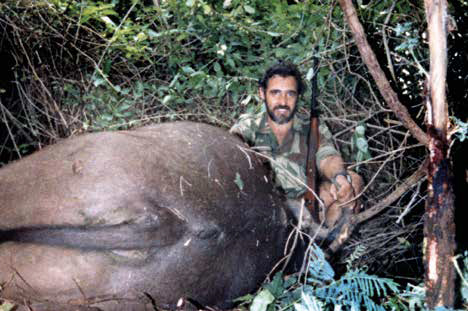 Petrus then moved forward to climb another tree about 10 paces to our left. He was halfway to it when there was a crashing and snorting and the bull charged straight at him. Through a small clearing in the reeds and undergrowth I took a snapshot, and the bull turned and was gone. My hurried shot had hit him in the throat and he ran out of the reeds into a small island of thick (very thick) lantana scrub and assorted nasty undergrowth. We carefully circled this island, but could not see any tracks of the bull leading out. He was waiting inside the tangle. Alec stationed himself on the path the bull had made on entry. I instructed Petrus to stay with Alec and I moved around to a hippo tunnel leading into the lantana. There was simply no room for two people to manoeuvre in the thicket.

For the benefit of those who have not experienced this type of vegetation, these hippo tunnels are only high enough to crawl or waddle along and the lantana leaves and stalks are as rough as coarse sandpaper, tearing and scratching clothes and skin. Great fun! All I could hope for was to spot the bull before he flattened me. I felt decidedly under-gunned with my .375. Boy, was I scared! But I kept my concentration on the vegetation for any movement. After what seemed like half a lifetime, a small clearing opened a few metres ahead. Once I reached it, I could at least stand upright. A slight movement to one side of the clearing caught my eye. In the shadowy gloom, I could just make out the buffalo waiting… Fortunately, he was facing the direction he had entered, which was away from me. He was no more than 4-5m from where I stood. Very slowly I raised the .375 and, taking careful aim, fired for the brain, killing him instantly.

The animal was a young bull and the reason for his bad temper was a nasty wound and abscess behind his front leg, caused by a 5,56mm NATO bullet which had lodged there. It must have been fired by one of the soldiers on patrols who moved through the area from time to time, keeping check on people and insurgents crossing the border from Mozambique.

Why the buffalo turned from his first charge at Petrus, I cannot say. Perhaps he was a young bull and not one of the old ‘dagga boys’ and maybe my shot hitting him from the side caused him to swing away. I don’t know.

As Alec later put it: ‘This was one of the most tense hunts I have ever had to do.’ I felt the same. However, fresh buffalo steaks and a few cold beers for lunch made it all worthwhile.