During the early 1980s, I was kept rather busy with problem animals along the southern boundary of the Kruger National Park in the Malelane area. There was a serious drought in this region at the time and almost every animal seemed to find grazing, browsing or other food on the private farms and estates along the boundary of the park, where irrigation was implemented.

Lion were a particular problem during this period. The drought had caused a lot of fatalities among the game animals and left enough carcasses lying in the veld to provide ample meat for even the weaker young lions and cubs to survive and thrive. Normally, these would have succumbed to starvation.

As these lions matured, they were forced out of the prides by the dominant males and became nomadic, pushed from one area to another until they eventually migrated out of the park boundaries and found easy pickings among domestic animals such as cattle and goats in the border areas. Cattle losses were heavy, with half a dozen beasts sometimes killed in a single night. Understandably, the farmers were upset and I was constantly on call when lions raided their cattle.

Elephant, too, became a headache for farmers, as the agricultural estates offered a variety of food such as mangoes, litchis, citrus and sugar cane – all staunch favourites among elephant during this dry period. Every night these hungry giants would cross the boundary fence and enter the agricultural areas, causing extensive damage to the plantations and orchards. Mango and litchi trees, which take years to mature and produce their first crop, would be broken down and destroyed nightly.

Being highly intelligent animals, these elephants were exceedingly difficult to control. They knew they were trespassing and therefore only raided at night, returning at first light to the sanctuary offered by the park. There they would spend the daylight hours resting in the shade, dozing and digesting their food in safety, as they waited for nightfall and their next raiding session.

Trying to chase these raiders out of the plantations at night became quite a challenge. When they got in among the ripe mangoes, they were very reluctant to leave this delicious food source. I remember even resorting to the use of a shotgun loaded with number 8 or 9 shot in an attempt to teach them a lesson and persuade them that it was wiser to remain in the safety of the park – but to no avail. Quite often during these night raids, an elephant would be on one side of a large mango tree with me on the other side. As I moved around, so would the elephant and all I would be able to see were his legs moving around the base of the tree. In the dark, this ring-a-roses (or, rather, ‘ring-a-mangoes’!) was a very nerve -racking game.

One particular group of these raiders became quite bold and sometimes stayed until the early daylight hours, causing a great deal of damage – especially to the mature trees. These elephants also started to become aggressive and dangerous, chasing the staff who arrived early to begin picking or spraying. Consequently, it was decided that this group of animals would have to be permanently removed.

After much soul-searching, I obtained a permit to shoot this particular group before they injured or killed someone. I thought it would be an easy task, but that was not the case. It was a large estate and when the elephant raided a crop, I always seemed to be at the wrong place at the wrong time. It was almost as if they had ‘inside information’ about my whereabouts.

I tried to establish an intelligence network among the field workers and other staff to inform me of any sign of the raiders in the orchards, or of the boundary fence having been broken or crossed. After a frustrating few weeks, my luck changed and we located a group of three young bulls in an open area near the plantations, but unfortunately only about 300m from the Kruger Park boundary. This area had sparse vegetation with scattered acacia trees, gwarri and raisin bushes, as well as short grass.

We had to get closer without spooking the elephant into making a break for the park border. The wind was not in our favour, constantly shifting, and the trio were on the alert, ready to hurry back to their sanctuary. My companion was armed with a .375 H&H and I had my .404 Jeffery. We slowly circled, trying to get the wind in our favour. Attempting to stalk them in this open terrain, with sparse bush and shrubs and just a few acacia trees to give cover, was difficult. The elephants were bunched close together and showing signs of nervousness, their trunks raised and feet shuffling. I was worried that they would either rush for the boundary – in which case the opportunity for a shot would be lost – or they would spot us and charge. We made an awfully slow approach, stalking carefully from shrub to shrub and tree to tree, until we were about 25m away from them. I wanted to drop the first one dead in his tracks in order to leave us free to deal with the other two before they made a dash for the park fence. My plan was to try to get about 10m closer, which would put me in position for a brain shot, but suddenly a shot rang out from behind and to my left. That gave me a shock and I saw a puff of dust fly from the one bull’s head – too high to hit the brain. The bull immediately swung towards us, shaking his head from side to side, making it difficult to get a brain shot, especially from this range. Alerted now, the other two bulls broke away and ran towards the park boundary. I fired at the wounded bull and he seemed to rock backwards, but did not go down. Another shot from the .375 had no apparent effect and he started to follow the others. I decided to anchor him and fired for the point of his shoulder as he swung around. This stopped him, affording me an opportunity for a side brain shot – which instantly ended matters. He collapsed on his left side and never moved. The other two bulls disappeared into the park. Fortunately, they had either learnt their lesson or had opted for raiding other pastures further afield, because we had no further trouble from them.

Then the lions started up again! 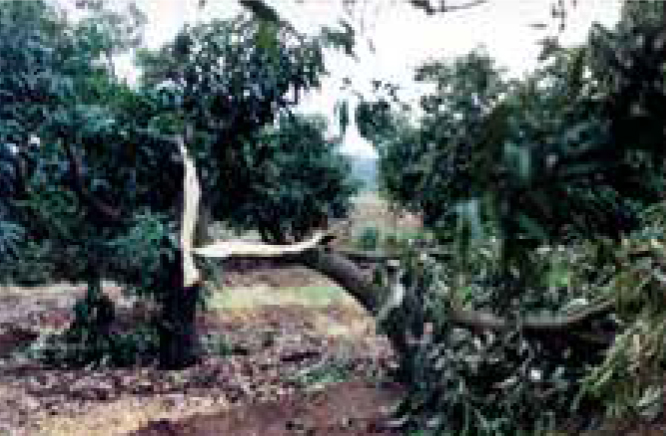 A mango tree destroyed by elephants. 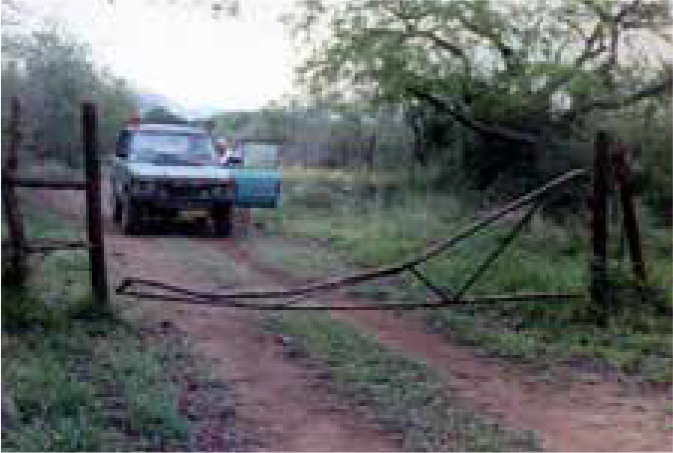 A farm gate destroyed by elephants. 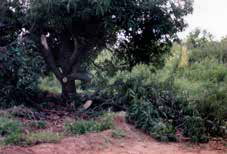 Destruction of land and trees by elephants.