At one stage, when I was doing wilderness trails for the Wilderness Leadership School, I was asked to do a promotional walking trail with a group of journalists and dignitaries to help raise funds for educational trails for underprivileged young people. Included in this group were Heidi Muller of the SABC German Service, Greg Marinovich (a photojournalist with The Star), Willem Pretorius (a journalist with the Afrikaans newspaper Beeld), as well as several other media people. This trail was conducted in the Pilanesberg Game Reserve wilderness area and, after a few hours’ walk, we had been fortunate in seeing a variety of game animals. Discussions on the importance and use of various trees and plants generated a lot of interest, and notes and photos were taken.

We had also seen a number of rhino middens and had interesting conversations about the differences between white and black rhinos.

While walking in single file along one of the game paths through moderately thick vegetation, I spotted a white rhino cow and calf making their way along the path towards us. The calf was just ahead of its mother, being directed by nudges of her horn, which is the norm for this species. There was a bit of a gap in the vegetation along the path and my thought was to move the party out of sight and out of the way until the rhino had passed on their way. I quickly moved the people behind a large tree about 15m off the path, but – with a photojournalist’s instinct for a sensational photo – Greg stepped into the path to take a picture. The sudden movement ahead of her startled the cow and she immediately broke into a charge directly at Greg. He was wearing a short, sleeveless waistcoat, with many pockets for all his photographic paraphernalia, and I managed to grab him by the back of his jacket and pull him into the bush on the side as the rhino cow went thundering past. Fortunately, she did not turn, but kept going with the calf, huffing and puffing like a steam train. Needless to say, everyone was shaken by this experience and we all needed a while to settle our nerves before moving on. 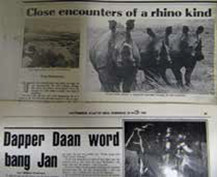 Articles from The Star and Beeld

Two interesting stories in daily newspapers came from this experience, one by Greg titled Close Encounters of a Rhino Kind and another in Beeld by Willem titled Dapper Daan Word Bang Jan (“Brave Dan Becomes Frightened Freddie”). Amusing stories which could have been tragic.

The experience proved that in the bush, it is mainly the clients who need to be watched! Another incident I experienced concerning rhino was in the Timbavati Reserve bordering the Kruger National Park. That time, I was on a walking trail with a group of Technikon students. We had started out at first light to make our

way to one of the waterholes, about 5-6km from our trail camp. A light drizzle and thin ground mist had set in, making the conditions cool to walk in and deadening sounds, but visibility was limited to short range. I spotted a white rhino cow with a half-grown calf about 30m ahead. The cow was lying down and the calf standing by her side. Because of the drizzle, we were all wearing some form of waterproof jacket, but I did notice that one of the young ladies had an umbrella folded up at her side. I had not given a thought to this when we set out, which turned out to be a mistake to be learnt from. The cow seemed reasonably restful and I maneuvered the group to sit just in front of a fairly large marula tree and squat down while we observed the rhinos from a distance.

The wind direction was a bit variable and the calf seemed rather nervous, but I knew that as long as the cow was calm, and we remained quiet, there should not be a problem.

The mist had lifted somewhat and the drizzle had become light rain. I was quietly describing the differences between the black and white rhino species when there was suddenly a loud ‘WHAP!’ behind me as the young lady opened her umbrella. This alarmed the cow, which was immediately on her feet and startled by the movement of this strange, round object in front of her. Up went her head, then down as she charged directly at us. I shouted to the group to get behind the marula tree, out of her line of sight. Fortunately, the cow and calf thundered past about 3m from us and kept going, presumably in search of a quieter place to rest.

This goes to show that a guide must carefully observe and anticipate anything a trailist may get up to! 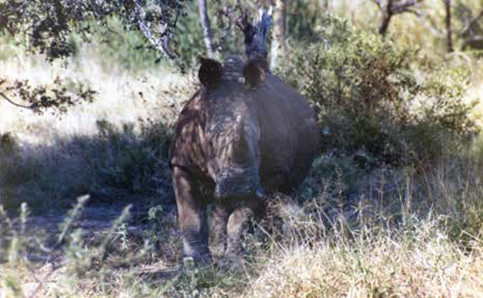 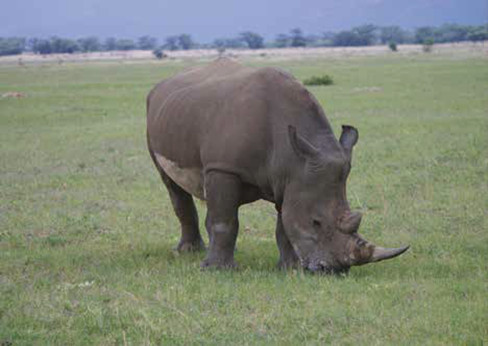 Another similar incident occurred when I was on a trail with a group of senior high school students, also in the Timbavati. We had walked about 6km to Oppie Dam, a medium-sized waterhole situated north of our camp. On slowly approaching it along a gully, I saw a young rhino bull also approaching the dam from the west side. There was a broken tree stump which had long acted as a rubbing post, against which rhinos and buffalo enjoyed rubbing mud and ticks off their bellies and legs. Crouching in the gully, we observed the rhino’s behaviour with interest. One of the boys had a 35mm camera loaned to him by his father and asked if he could take a photo. I did not see any harm in this and thought a quiet click would be safe enough from our distance. I did not realise that the camera had an auto-rewind and was on the last two frames. Nothing happened with the first click, but on the second, everything went pear-shaped. The camera automatically started rewinding the film with a loud, whirring noise. The startled rhino spun around in a circle trying to find the source of this annoying sound and immediately charged in our direction. Fortunately, he could not see us so low down in the gully and turned off at its edge, then kept going along the side of the gully and into the bush ahead.

This again taught me a lesson about noisy contraptions such as auto-wind cameras, beeping alarms on electronic watches and, later, cellphones, which were all banned from my trails and had to be left in camp. And, of course, umbrellas!