Over many years I have written articles and short stories for various magazines and publications, most based on personal hunting experiences, and some articles hopefully of interest on firearms, ammunition and equipment.

A number of people have suggested I compile these into a book to share ideas and memories with those who may have missed some along the way.

My interest in hunting and guns goes back as far as I can remember. As a youngster aged nine or 10, I found out that my dad had a shotgun that was stored at a friend’s house. Greatly excited, I jumped on my bike and pedalled away to ‘Uncle Mac’ to fetch this treasure. Then, with the shotgun tied to the crossbar of my bike, I cycled the 8-10km back home.

The gun was an old Charles Osborne side lock side-by-side, with Damascus barrels. The one barrel had a dent in it, caused when someone had fallen into a pig hole. In those days, I knew nothing about shotguns, Damascus barrels, proof and all such technical points. I knew only that it was a shotgun and I could hunt with it! All I needed was to scrounge some cartridges and the guinea fowl, francolin, pigeons and other birds were in the bag. Over the next few years, I fed anything I could scrounge, from light clay pigeon loads, Eley Grand Prix, Eley Alphamax, shot sizes 6 to AAA, to SG, and anything in between. The gun handled it all without blowing up in my face. The gods of hunting and shooting, as well as my guardian angel, were working overtime.

Over the years, I started learning about guns, barrel steel, proof and safety, and still get cold shivers thinking about the chances I took with that old firearm. It is a great tribute to the skill and techniques of the English gunsmiths, and the high standards they employed in their craft, that that gun withstood the abuse to which it was often subjected.

When growing up, my weekends were always spent on a farm somewhere, chasing gamebirds, duiker, jackal, or whatever else I could find. Then came the army call-up, which most of us had to endure. I managed to save up my army pay (50c per day, before deductions) and at the end of my nine-month stint, I walked into a shop called Shimwell Brothers in Krugersdorp which sold farming implements, tools, cycles, fishing tackle and some firearms. I walked out as the proud owner of a fine sporting .303. This was not a standard rifle converted from a military model, but a factory-finished sporting gun with a beautiful walnut Monte Carlo stock, with all the trimmings, made by Parker-Hale.

As the years went by, while working on various geological projects on farms and prospecting concessions, I organised my life to get in as much hunting as time would allow, mainly impala and the odd kudu or two. In those days, farmers were very generous and hunting was easy to obtain.

I managed to find employment with a Canadian mining company which held prospecting concessions in southern Africa, including South West Africa (now Namibia), Angola, Botswana and the Rhodesias (Zimbabwe and Zambia). The company had a wonderful system which allowed employees to accumulate leave and then have a three-month ‘long leave’, which enabled Canadians working overseas to travel home for those periods. This suited me, as I could then plan three-month safaris and get my hunting done wherever I could arrange it. It was heaven! Friends with farms in Rhodesia and northern South West Africa saw a lot of me, with even the odd foray into Angola. If money could stretch, I even booked hunting concessions in Rhodesia’s Zambezi Valley and Botswana.

An acquaintance who ran a photographic safari operation in Botswana offered me a position as a freelance guide, taking guests out into the Okavango and the Kalahari concession areas. He also arranged the odd buffalo hunt from time to time. One of these hunts became a bit ‘hairy’ and is covered in a chapter further in this book.

Botswana in the early years was a paradise for hunting. A General Game Licence (seasonal) was R60 for 12 or 13 animals; the season was March-November. A supplementary licence could then be obtained for other game such as buffalo: R20 (later R50), lion: R80 and elephant: R150 (later R200). Today these prices seem unbelievable, but they were quite a bit of money back then. A two-week hunting safari, one week in Okavango and one week in Kalahari concessions, including a supplementary licence for buffalo, cost about R300-R400, which included licences, fuel, area and concession fees, food, export fees, staff wages and rations.

So much for my early ventures, which started me off and developed my interest in the hunting life. I hope readers enjoy the stories and contents of this book and forgive me if some of them are repeated from various magazine articles.

Lastly, I would like to dedicate this book to: 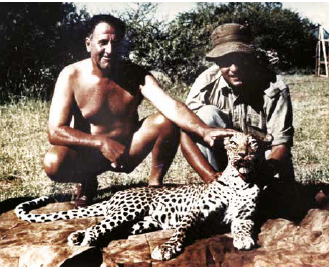 In the early ’70s, I was working on a survey for copper on a prospect in the mountains north of Warmbaths in the former Transvaal. I had invested in a SAKO .375 H&H rifle which kicked like the proverbial mule and a 12-bore BRNO SxS shotgun.

Farmers in the area were often plagued by leopard which played havoc with their stock, especially sheep and goats, as well as the occasional calf.

Early one morning, one of the farmworkers arrived at my camp to ask for my help. Apparently, a leopard had been caught in a gin-trap which was set for it at a kill. During the night or early morning, the leopard’s struggles had broken the wire holding the trap and it had dragged itself into one of the nearby kloofs. The farmer was afraid it would attack someone walking past and no-one was keen to follow its tracks to try to dispatch the animal. The drag marks of the trap were clear in the sandy terrain, but upon entering the stony kloof, they became difficult to follow. I was armed with my BRNO shotgun loaded with AAA buckshot, while the farm foreman following me only had a single-barrel .410 shotgun. I was more nervous of this foreman behind me, with the shotgun pointed in my direction, than of the wounded leopard we were tracking. At one point, I could make out where the animal had lain down in the sand at the foot of a boulder and tried to claw at the trap on its foot. The kloof was thickly wooded, with scattered boulders along the sides of the stream bed. Earlier on, I had heard baboons giving the odd bark, but suddenly they began creating a fearful cacophony of barks and screams. I was sure they had spotted the leopard and were raising the alarm to warn of their age-old enemy. At this point, the foreman decided he was not going any further and I was quite happy for him to remain as ‘rear guard’. I moved on very slowly, trying to take in each bush or blade of grass before my next step. Apart from the baboons barking from a krans overhead, there was no noise or movement around. Then, suddenly, I picked up a flash of movement on my right: the leopard was already in the air above me, launching itself off one of the large boulders. I had no time to even lift up my gun, but fired from the hip.

The charge of buckshot hit him in the chest and head, and he thumped down about 2m away from me.

It took a while for the adrenaline and the shakes to settle, when I realised I had faced and survived my first charge. I also realised that I should have had an experienced tracker to watch the spoor while I concentrated on any movement. It is difficult for one person to do both. I was incredibly lucky – and deeply grateful to my very hard-working guardian angel.