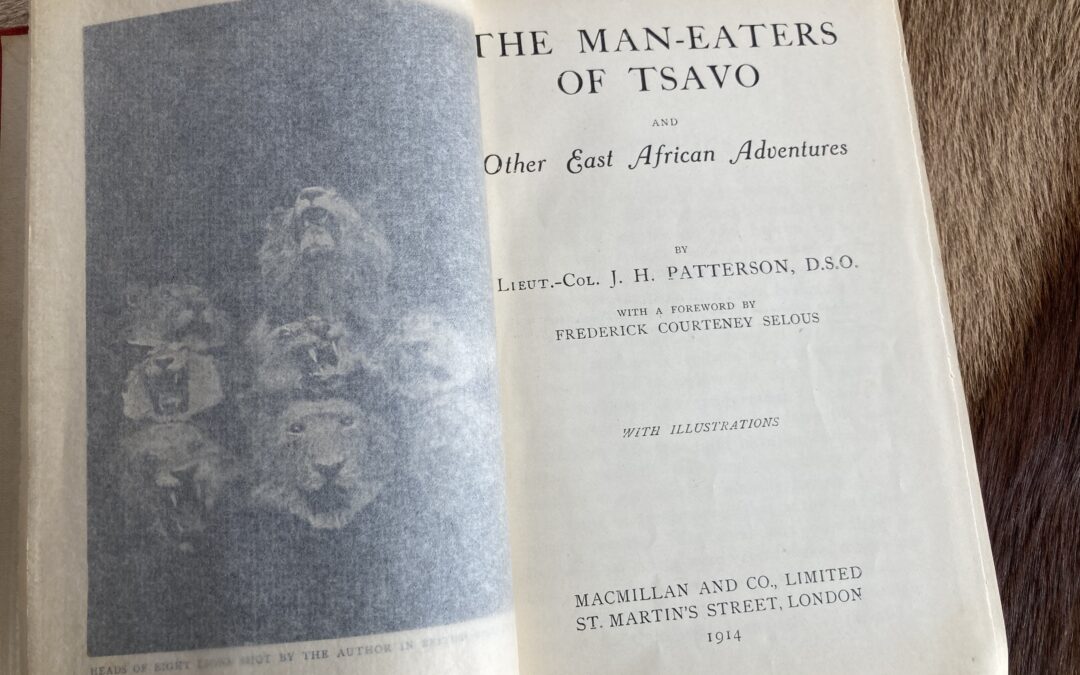 The Man-Eaters of Tsavo and Other East African Adventures

This is quite likely the most well-known story of African hunting and adventure. And rightfully so, as it has all the elements of every classic tale – tragedy and horror coupled with heroism and redemption. I’m mean, who doesn’t enjoy a good train wreck, literally and figuratively, especially one that stars man-eating lions and a decorated military figure?

Patterson relates much more here, however, than just the 1898 story of the two man-eating lions that, in what is now Kenya, terrorized workers constructing a Uganda Railway bridge over the Tsavo River. Still, it’s the six chapters detailing his efforts in dispatching these marauding lions that have made Patterson’s name so well-known more than a century later, and have been the inspiration for at least three feature films.

As might be expected from an Edwardian-era British army officer, the writing is somewhat dry and to-the-point; it’s not the writing but rather the tale itself that makes this such a compelling read. For those not familiar with the plot, Patterson was commissioned to oversee the rail bridge’s construction. Not long after getting started, railway workers, predominantly Sihk “coolies”, began disappearing from their tents at night, with evidence revealing they’d been carried off by lions. Thus began a several-month- long effort by Patterson to dispatch the two lions responsible. The attacks, and the deaths, became so frequent that at one point, bridge construction came to an absolute halt for three weeks. But in true British fashion, while concurrently dealing with disastrous floods and workers threatening to walk away, Patterson kept a stiff upper lip and (spoiler alert!) eliminated both of the lions, although not without some harrowing escapades along the way. How many people these lions eventually killed is up for debate (time has a habit of embellishment) but depending on the source, it’s anywhere from 30 to 130 individuals, a remarkable total in any case.

What’s been forgotten or ignored by many is that in The Man-Eaters of Tsavo and Other East African Adventures Pattersonalso describes numerous other of his hunting experiences, including close encounters with rhinos, hippos and even more lions, along with his interactions with, and descriptions of, the local indigenous tribes. Perhaps the most important of these stories is his tale of hunting and being the first to describe the subspecies of eland that bears his name to this day – Taurotragus oryx pattersonianus – the Patterson’s, or East African, eland found in Tanzania, Uganda, Ethiopia and other parts of eastern Africa.

If you’re reading this, there’s a good chance you already know the story of Patterson and the lions of Tsavo, but you may not have read the book. If you haven’t, I would encourage you to do so; this true tale has attained legendary status, and you owe it to yourself to hear a first-hand account from the man who was at the center of it all.