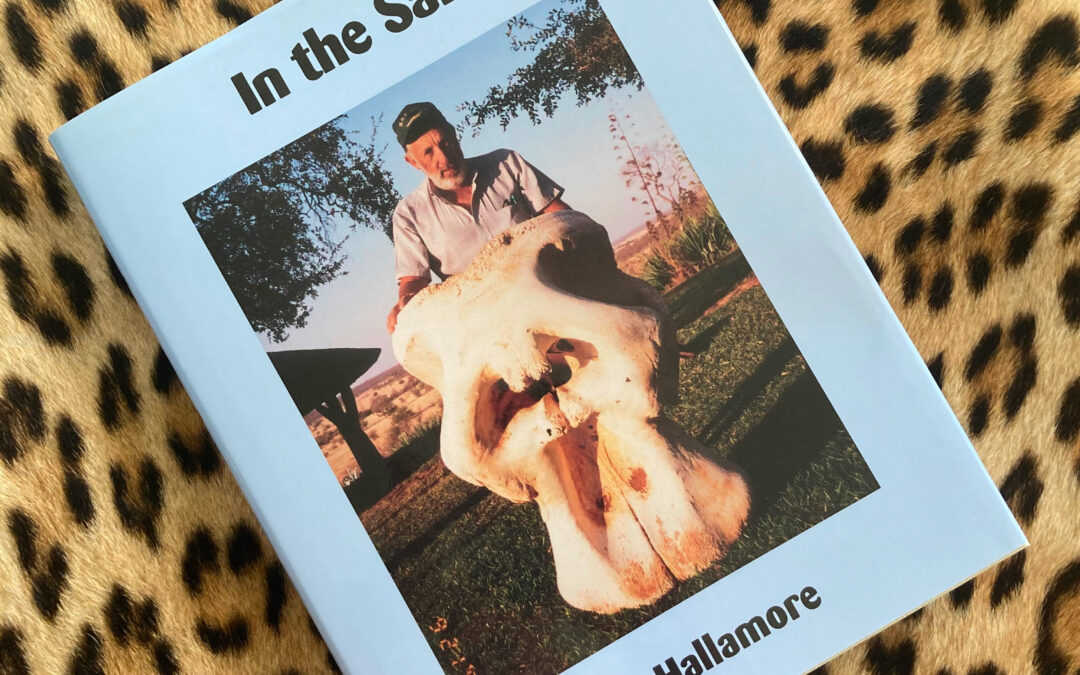 It’s been said that Lou Hallamore, one of Zimbabwe’s most revered PHs, has spent more time in leopard blinds than most of us have spent in movie theaters. His knowledge about hunting the great spotted cats is legendary, and is captured in the 2011 book he co-authored with Bruce Woods, titled Chui! – A Guide to Hunting the African Leopard. As you would guess, it’s very much a niche book, a manifesto targeted to PHs and clients with a passion for leopards. In the Salt, on the other hand, takes a much broader stroke, detailing Hallamore’s thoughts on hunting 25 of the most common species found in Zimbabwe and elsewhere in southern Africa.

Make no mistake, this is first and foremost a “how-to” book, not another collection of “me and Joe” stories of African adventure. In fact, without having any information to substantiate my assertion, I would suggest his intended audience was PHs, young PHs in particular; it reads very much like it was written by an old professor revealing his trade secrets to an up-and-coming protégé. This is not to say that client-hunters won’t get much from this book. It’s just the opposite, in fact—if you’re one of those who prefers to truly understand the strategies and tactics your PH employs, and the reasons for the decisions and recommendations he makes, then this book is for you. On the other hand, if you prefer to just go along for the ride as the designated shooter, there’s not nearly as much for you between these covers.

Don’t let the “how-to” nature of this book lead you to believe the text is somehow dry and academic, however. Hallamore weaves countless anecdotes throughout that both educate and illustrate. Want to know how to estimate the age and ivory size of an elephant from the length of its footprint or the cracks in its feet? You’ll read of Hallamore’s real-life experiences that support his assertions 80% of the time, and others that illustrate why 20% of the time you can throw the rules out the window. All in all, it’s fascinating reading.

The format of the book is pretty straight-forward. Every chapter, or sub-chapter, is dedicated to a specific game animal. Each is further broken down into recommended firearms/cartridges, detailed tactics for the various hunting strategies and scenarios that are common for the species, tips on judging trophy size, shot placement recommendations, whether you should have your PH back-up or not, game recovery tips, and an interesting short finale he calls “the way things really are.” In this last section he provides valuable, informed advice that helps PHs and hunters alike differentiate between realistic expectations and wishful thinking. As an example, in the chapter on crocodiles, Hallamore concludes by saying, “Twenty-footers don’t exist. Fifteen feet is a huge croc; in fact it is exceptional. I look for anything over the 12-foot mark and if we find something bigger, that’s a bonus.” That’s down-to-earth practical advice that can be hard to find. Harder still to accept, for some.

With regards to shot placement, Hallamore introduces the reader to a concept he calls the “pay line.” The pay line is an imaginary line drawn through the body of an animal, bisecting it in half, top to bottom. Shoot an animal above that line and chances are it’s gone he says, probably never to be recovered. Still, you’ll have to pay for it, hence the term. He also shows a vertical line on the animal, delineating the furthest back you can shoot and expect to recover it. There are full-color illustrations showing the pay line for 12 of the most commonly hunted species.

I really appreciated a chapter called “The Equipment” where Hallamore offers dedicated gear lists, and the rationale for his recommendations, for vehicles, PHs and clients. These make for great time-tested check lists when preparing for your hunt. He also includes a chapter making recommendations for both a PH’s and a client’s battery—it’s not anything that hasn’t been done before, and often, but Hallamore’s take makes for interesting reading.

Engrossing reads both, the first two chapters are biographical in nature. One describes his early life, his introduction to hunting, and a brief overview of his PH career. The other describes his eventful 20 years in the Rhodesian military forces.

When discussions of the “best reads” about hunting in Africa arise, I doubt In the Salt gets mentioned very often. That’s a shame, because it’s captivating in its own way and one of the few books that will make you a better hunter while concurrently entertaining you with the usual, and unusual, tales of safari life that we all enjoy.