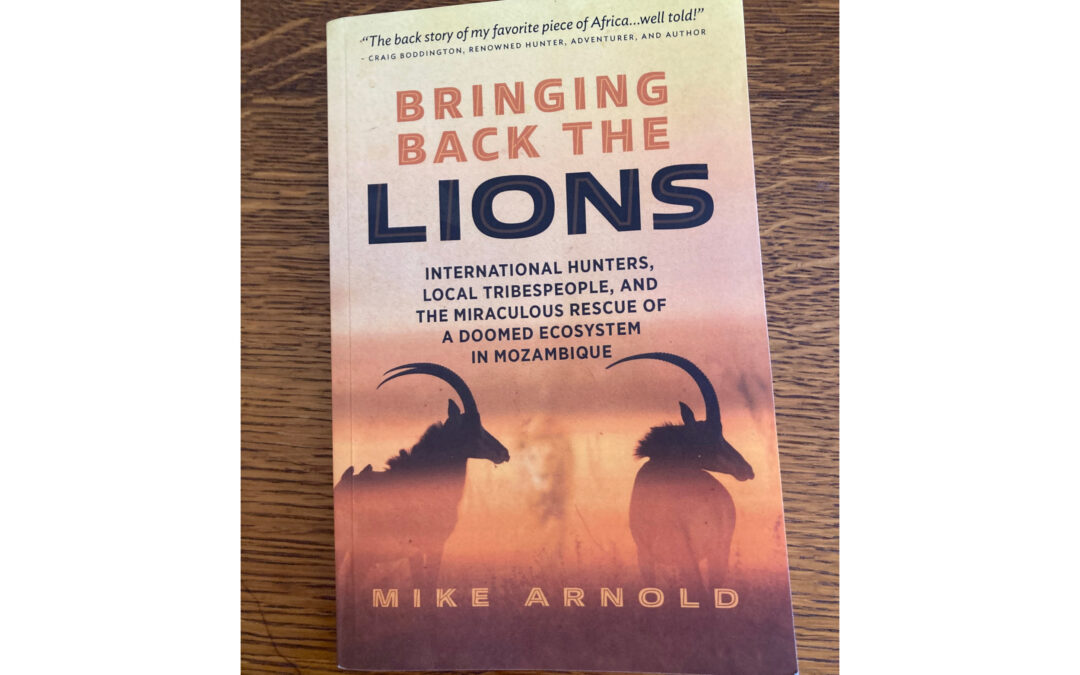 Bringing Back the Lions

Bringing Back the Lions: International Hunters, Local Tribespeople, and the Miraculous Rescue of a Doomed Ecosystem in Mozambique is a classic tale of resurrection in a contemporary setting. But make no mistake, this is no legend or fable; this is a true account of how a small group of dedicated visionaries were able to bring back to life a landscape that had been used, abused and all but discarded.

Bringing Back the Lions tells the story of Coutada 11, a hunting concession along the Zambezi River delta in eastern Mozambique. In 1994, PH Mark Haldane of Zambese Delta Safaris (ZDS) arrived and found the region in shambles. After 15 years of civil war, the once thriving game populations had been decimated; buffalo numbers had plummeted from an estimated 45,000 before the war to roughly 1,200, waterbuck populations fell from 80,000 to a mere 2,500, and sable were down to just 50 animals. Though good numbers of some of the smaller game like suni and duikers remained on the fringes of towns, the larger game animals, including sable, hartebeest, nyala, eland and zebra, were nearly gone, having been poached relentlessly. It wasn’t just the wildlife that was suffering when Haldane arrived in Coutada 11. The local people, too, were in dire straits; malnourishment was rampant, and there was neither a medical clinic nor a school within reach.

With the diversity and abundance of largely intact habitat, Mark had a vision for restoring the region back to its former self. But unlike many visionaries, Mark also had the determination, commitment and the ability to create willing partners that allowed his vision to become a reality.

As described in wonderful detail in Arnold’s book, the successes in Coutada 11 are almost too numerous to be believed. Haldane understood the importance of building an effective partnership with the local communities and has taken those relationships to unprecedented levels. Today, anti-poaching patrols are conducted by once notorious local poachers, and Haldane purchased a tractor and plow to establish a series of plots where local families can grow maize and rice; he even provides fertilizer annually. Thanks to a meat-sharing plan with ZDS, malnourishment is a distant memory, and today there is a community medical clinic and a school. Many of the local people have jobs with ZDS, and they no longer live in squalor.

As Arnold relates, the wildlife have benefited immensely since Haldane came to the area, instituted anti-poaching programs and invested in reintroductions. Today there are an estimated 25,000 buffalo in Coutada 11, and some 300 sable antelope. And, as the title suggests, in 2018 Haldane released 24 lions into the concession; today there are 60 of them spread among eight prides. In 2021, after a century of extirpation, cheetahs were reintroduced to Coutada 11. They’re considerably more fragile than lions, and it’s too early to tell whether they’ll establish themselves, but so far it looks promising. While it’s highly dependent upon available money and other resources, Haldane and his partners are also considering reintroducing other native species, including black rhino, wild dogs and jackals.

Many of us who hunt in Africa regularly are fond of telling people about the benefits to the wildlife and the local communities provided by our hunting dollars. Most often we talk in generalities because, while we know it to be inherently true, we don’t have a lot of details to support our statements. In Bringing Back the Lions, Arnold has provided us with a detailed example that every hunter can and should be proud of. When we have leadership like Haldane’s, we can make a meaningful impact on the ground, and Arnold takes us through the many benefits and many successes.

If I have one complaint with Arnold’s book, it’s that the photographs are in black and white and, in some cases, not very clear. Further, the photo captions are not below the photos, but summarized at the beginning of the book, following the table of contents. I find this cumbersome and distracting.

Irrespective of that small annoyance, Bringing Back the Lions should be mandatory reading for every hunter and for as many non-hunters as we can influence to read it. It’s a heart-warming story of a modern day conservation success that should inspire everyone with a passion for wildlife. It’s also a lesson in how much can be accomplished by a determined few. In fact, cultural anthropologist and author Margaret Mead could well have been thinking about Haldane and his partners when she said, “Never doubt that a small group of thoughtful committed citizens can change the world; indeed, it’s the only thing that ever has.”