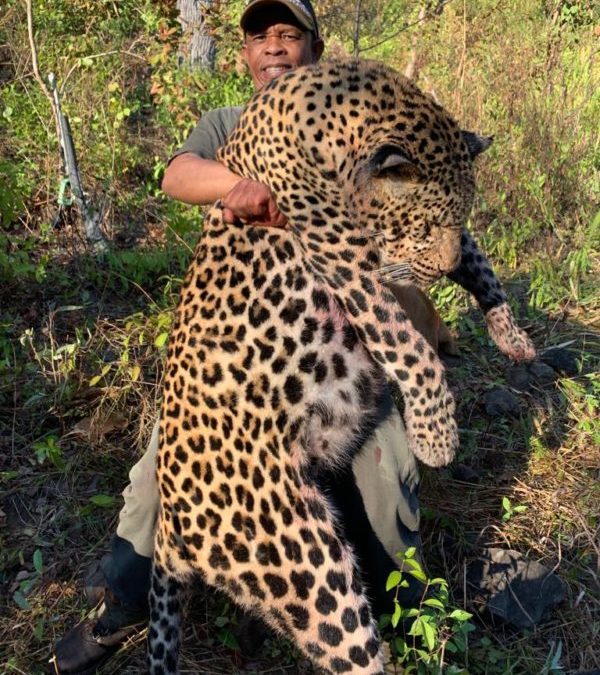 Hunters who have had the privilege to hunt leopard over hounds or over bait will know the anticipation and excitement of the hunt, from the day you book it, to the day you start hanging baits or dragging roads, through to the day you first lay eyes on your leopard. For Todd this all started in 2017 when he and his hunting mate John booked a double leopard hunt with us and our hounds in the Lowveld of Zimbabwe. A coin was flipped, and John was first up. On Day 9 of 14 the hounds closed in on John’s leopard and, after a very exciting ground fight, a superb, old, trophy tom cat was harvested. We rested the hounds on day 10 and then spent the next 4 evenings being blown off the tracks by the August winds. Long story short, we did not manage to connect with Todd’s leopard on that hunt. Unfortunately, that is leopard hunting!

Fast forward to 2019 and Todd was ready to return to fulfil his leopard hunting dream. This time he booked for May 2020, braving the heat in return for some moisture and greenery for the scent to stick to. With everything booked the countdown began. In March 2020 our season was just getting under way when we were knocked with the Corona Virus, a lockdown was implemented along with strict traveling restrictions. I remember thinking to myself that this would all blow over in a few months and we would get this hunt in before the end of the season… well, 2021 is here and so is Covid! We stuck to the same dates for 2021 and had our fingers crossed we could make this happen.

Thursday May 6th, my alarm was set for 02:00, 02:05, 02:10 and again for 02:30 just in case my snooze button was hit by accident. Before the 02:30 alarm I was forced to get up as the hounds had seen and heard Sakkie (my tracker) heading towards the vehicle to load the final bags. It’s incredible how the hounds know when it’s their turn to hunt. We opened for the 12 hounds that were coming on the hunt for a quick run around in the yard to clear their stomachs before the long journey ahead. Our plan was to drive 15 hours from Nottingham Road, Kwa Zulu Natal, through Beitbridge Border and on to Mbalabala where we would spend the night before collecting Todd in Bulawayo on the morning of the 7th. As most things in life, things didn’t quite go to plan. The trip to Johannesburg ran smoothly but once there we were delayed for 4 hours trying to sort out dog harnesses as I was told a few days before that “Oh I forgot to tell you, camp is right on the Zambezi River which almost makes it an island when the water levels are high.” So extra precautions were taken to make sure no dogs could get off their chains and end up swimming in the Zambezi. Anyways, we managed to get the harnesses and let the dogs off for a quick stretch and water before continuing through to Zimbabwe. We arrived at the border at around 7pm and sailed through the South African side and started with the Zimbabwean side at around 8pm. Everything was looking good until we were held at the border for 5 hours due to us not having an original stamp on the dog permits. I tried explaining that it was sent via email from head office in Harare so I couldn’t have the original, but it was a losing battle. Eventually we were allowed to leave, we had been on the road for nearly 24 hours and still had another 4 hours to go. Sakkie took over the wheel and I still don’t know how he knew where we were going, but he is an expert tracker after all. We had only stayed there once before, but needless to say he woke me up and asked if we should let the dogs off to run around before driving into the yard. After getting the dogs fed, watered and onto their chains we had 3 hours to sleep before leaving for Bulawayo.

Friday May 7th, with Todd now in the vehicle we set off on a 5-hour drive to our final destination, Sidinda Conservancy in Hwange. I booked this hunt through a good friend and PH Pierre Hundermark. We met up with Pierre in Hwange town to fill up with diesel before heading to camp. About 30km from camp we opened for the hounds to run around and get some water knowing that when we reach camp, they will have to be taken off one by one to make sure none get close to the water’s edge. With the fading light we quickly got Todd familiar with the rifle he was to use as tomorrow morning we were getting up before daybreak to check some baits. We arrived in camp and got settled in and discussed our plans for the morning. A big male leopard had been feeding the nights leading up to the hunt and last night he ate, but lightly.

Day 1 of Todd’s 14-day Safari started with our 3am wakeup call followed by a quick cup of coffee and then collaring and loading up the hounds. The night’s sleep wasn’t the best as all I could think about was one of the hounds getting off their chains and whether the cat had fed again. We drove for an hour to the bait where the cat had been feeding, but it felt like forever! The anticipation of not knowing how the next few hours is going to play out will kill anyone. We arrived at the bait site just as the sun was coming up. The walk to the bait was about 400m down into a valley. Todd, Pierre, and I got all our things together and started the walk to the bait. As we walked up it was clear that he had been back and had fed last night. Although he hadn’t eaten a lot a decision was made to drop the dogs and see how they pulled the track. I radioed Sakkie to drop my 4 start hounds. I checked on my GPS and saw they were on their way; I called a little bit and before I knew it, they were at the tree. Without any idea of the times he fed and how many times he came to and from the tree we gave the hounds time to work out the correct line to take. Within a matter of minutes, they had worked out what seemed to be a solid line. I went along the river whilst Pierre and Todd walked higher up on the ridge, which proved to be the smarter route. With the incredible rainfall that Southern Africa received this past season the bush was lush, green, and extremely thick. The hounds were quickly getting out of hearing distance when Pierre radioed to say he thinks they may have jumped the cat. At this point I was stuck in the bottom of the valley trying to wriggle my way through the thickets. I radioed Sakkie and asked him to drop the rest of the pack if he could hear the other dogs and to start heading towards them. I managed to get out of the thickets and onto the side of the mountain wearing a new designer ‘crop top’ due to it being ripped off when trying to run to the dogs. I met up with Pierre and Todd, and we checked the GPS and saw that the radio collars were not picking up, so we immediately started heading up to get a better connection. As we got on top my GPS showed the dogs were standing. I quickly ran towards them and as I got close to the edge of the hill, I could hear the hounds followed by the growls of the leopard. I signalled to the trackers to tell Todd to get to me fast as the cat was bayed on the ground in the bottom of the valley in grass taller than me! With the rest of the pack on their way, we tried to get into a shooting position as we knew that the minute the rest of the dogs joined in the cat was going to explode from the pressure.

The rest of the hounds arrived and as predicted the cat started to feel the pressure. The hunt intensified as the cat had chosen fight over flight. Those that have heard a leopard in this situation or similar, will understand the feeling of having hairs standing up in places you never thought hairs existed. We started moving slowly down the steep incline towards the cat: he rushed the hounds a few times and knew of our presence, but he stuck to the thick grass. As we got into position, I heard Todd say, “my glasses are misted up”. As he said that the cat rushed the dogs and came straight our way, stopped, and stared straight into our eyes. “There he is, shoot him” ………. “shooooot”….. Bang! The shot rang off and the cat retreated. Todd’s glasses had misted up and he had shot just over the cat. The dogs chased up the opposite bank where the cat found some more extremely thick grass to bay in. I hear the cat give one “brrrrrpppp” and again he came straight towards us, the dogs turned him and, as he ran through the smallest of clearings heading back up, Todd shot. It was one of the best shots I have seen on a running leopard. He hit the cat right between the shoulder blades dropping him in his tracks. I ran down towards to the dogs to make sure the cat was dead and not about to give one last bite. “Whoooowhoooo…. Whoooowhooo” rang out throughout the valley, this is my way over praising my hounds for doing well. Todd arrived at the cat and the emotion behind the smile could be seen from a mile away.

We moved the huge cat into a more open area. This is where it all started to sink in for Todd. It was an absolute giant of a Valley cat. His teeth had started to wear down and, with prominent dark yellow staining, this is a good indication of an older leopard. For Todd, this was Day 1 of his 14-day leopard safari, and we had got it all done within the first 2 hours of the hunt. It’s funny how these things work, I always tell my clients, “We will do everything humanly possible to get you your cat but if it’s meant to be it will be” and this was definitely meant to be.

The leopard hunt dream was fulfilled and, with 13 days left of the safari, we sought out more of Todd’s bucket list animals. We were very fortunate to take an ancient elephant bull, which was nearly through his last set of molars, a beautiful Dugga Boy and to test our fishing and drinking skills whist celebrating and catching vundu on the mighty Zambezi River.