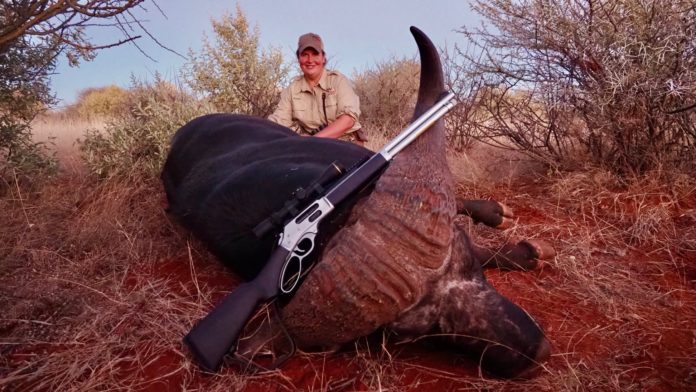 While most folks spend a lifetime dreaming of hunting Cape buffalo, I was lucky enough to make that dream a reality.

Cape Buffalo, known as The Black Death for their aggressive and angry nature, are one of the most dangerous big game animals not only in Africa, but in the world.

Early on, we had identified the old warrior of a bull that I wanted to hunt, instantly recognizable for his scarred face, worn horns, hard bosses, and wide spread – all the character a hunter could want in a Cape buffalo.

Stalking bachelor herds of bulls was exhilarating, to say the very least. The buffs were incredibly wary, even as we climbed the rocky kopjes and snuck through the thorns. We were busted over and over again.

When we finally caught up with the herd once again, the shot opportunity came fast. I was confident in the shot placement, just behind the shoulder as PH Stephen Bann from SB Safaris instructed. As the rest of the herd ran off, this buff immediately dropped, then rose again and disappeared into the thick bush. Stephen proved himself an expert on the tracks in the red sand.

Though moments seemed like hours as we pursued the wounded beast, it was to be a short track. A wounded Cape buffalo will charge in a flash, with pure intent to kill. Our group of four, each armed with a big bore rifle, were on highest alert. With a great crashing in the bush ahead of us, the bull gave his final death bellow, a guttural sound that pierces your very core. We froze momentarily and then were running in that direction.

It couldn’t have been scripted much better. We found the buff had dived headlong, nearly upside down, into some brush. Few Cape buffalo are harvested with one shot, and even I was surprised at the performance of my Henry lever action in .45-70 Gov’t. After a prayer of thanksgiving for this amazing hunt and harvest, our group celebrated the trophy – and memories – of a lifetime with hugs and more than a bit of emotion that is difficult to explain until one has experienced it all.