Hunting for a Trophy Nyala Bull with Monkane Safaris 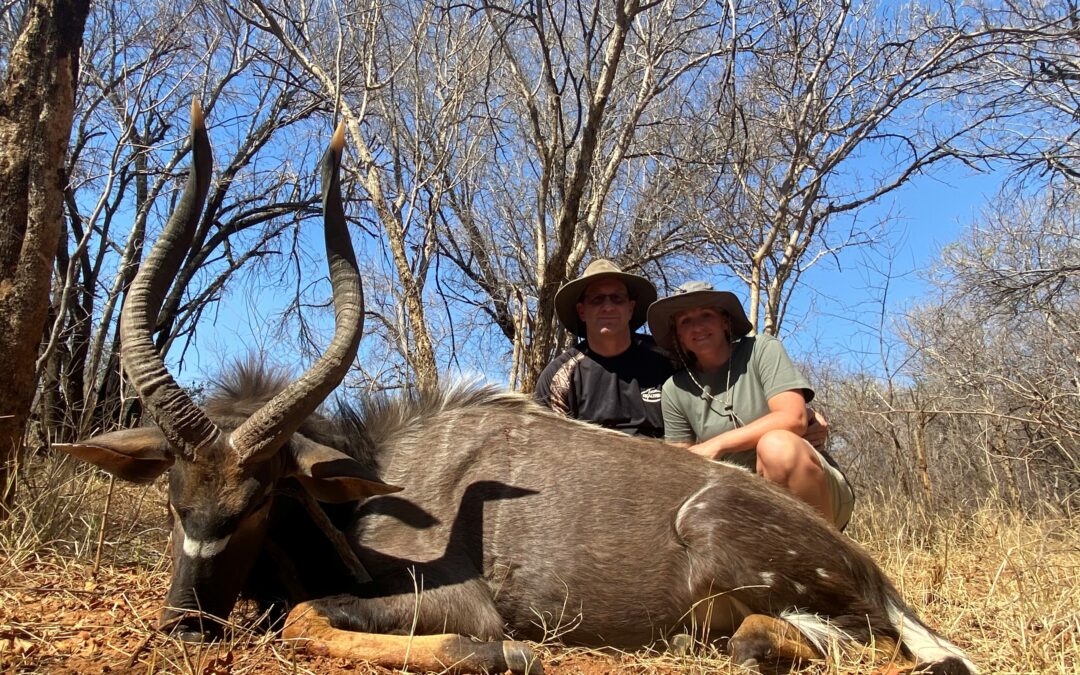 I was back in the Limpopo province hunting with Monkane Safari owned and operated by Kereneels Verjon. It was my first day on what would turn out to be a marvelous safari filled with high drama and lots of surprises. The kick-start of the adventure was to find me a mature, trophy-quality nyala bull. We started out well before daybreak after a delicious breakfast prepared by a master chef. We were in the truck heading to a beautiful property known to have a tremendous number of quality nyala bulls.

It was a long drive to get to this paradise, but it was well worth the trip. We arrived as day was breaking, cascading sunshine across the rolling hills. We had barely got started when we saw a large nyala working his way up a dry riverbed. I had seen nyala before on another safari, but this bull dwarfed what I had seen before. We barely slowed down to take a look at the bull before it was decided to move along – he just wasn’t what we were looking for. I was shocked! It sure looked like a shooter bull to me. I was aware of the old saying never turn down an animal on the first day that you would shoot on your last day. We were barely ten to fifteen minutes into our hunt, but that bull had tall horns that just spiraled straight up. It was quite an impressive specimen. I immediately asked my PH Gerhard Smit why we had passed on this bull.

Gerhard smiled and explained that he was a good bull, but we could do better, especially on this property. The farm we were on was huge – it was vast, covering miles and miles. The property had an enormous lake surrounded by rolling hills and a small mountain range. The various vistas were stunning. Every picture looked like a post card. I knew the property was massive, but I still thought the bull was large enough to make the SCI record book, which is what I wanted.

My daughter Misty was with me on this safari as an observer. She looked at me and raised her eyebrows. I knew what she was thinking – Dad that was a big one! We drove for hours crisscrossing through the veld. We spotted plenty of game and stopped to look at zebra and giraffe which seemed to be everywhere. We even saw two kudu bulls that were each well over 50” of curving horns. I was tempted to go off script and attempt to take one of those massive bulls, but I had a nice kudu mounted at home. I had a full dance card hunting new species of game that I had never hunted.  Africa is funny that way. You never know what you might encounter that could change your whole safari. I showed great restraint as I asked my guide to stop the driver so we could judge these two incredible bulls. Gerhard confirmed that they would stretch the tape into the mid 50” range, which is an extraordinary bull. I took a deep breath, exhaled, and told Gerhard that I already had taken a good kudu, but truth was the one I had at home was not nearly as nice as these two magnificent animals.

The bulls spooked, as they didn’t enjoy our attention and off they went. We proceeded onward but my mind drifted back to the kudus. We saw many nyala, but most were small males, some very nice, but we hadn’t found anything anyway as nice as the first one we saw. The search continued as we drove across the property to a large lake. I learned that a hippo actually lived somewhere in the lake and had caused problems as it had chased off some folks who had stopped to admire the view and drink in the serenity of the scenery. We skirted along an embankment and moved back into some trees. We saw a couple of good nyala and stopped to take a closer look. 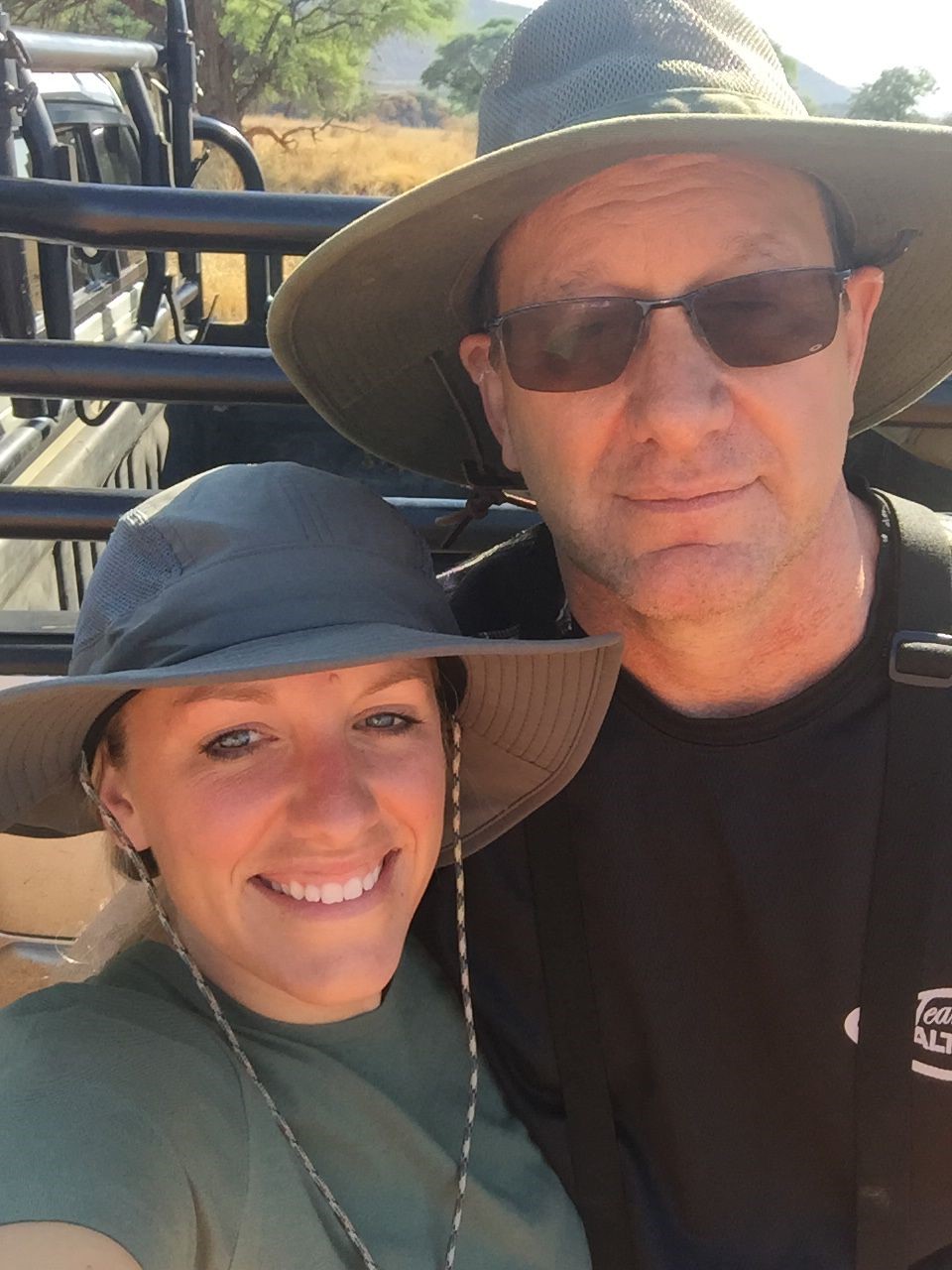 Misty and Darrell Sterling – father and daughter hunting together.

I grabbed my Ruger .30-06, my daughter decided to film using the latest i-Phone which she dug out of her pocket, my PH grabbed the shooting sticks, and we headed off into the bush.  We didn’t have to go far until we saw the nyala. I was excited as I thought that this would be the one for me. But Gerhard just looked and turned, saying let’s go. We quickly loaded up and was back cruising the veld.

“I thought he was a good shooter bull,” I persisted.

“We can do better,” my PH replied, “as we have all day.” I told my daughter this is what makes a good guide. He could have easily let me shoot any number of bulls we had seen, and I would have been happy, but Gerhard knew the area had really high record-book trophies, and if we were selective and passed enough bulls sooner or later, we were likely to be rewarded. I patted Gerhard on the back and told him I was glad he was my PH and I was sure we were going to have a great safari together!

A picky PH is a major key to any successful hunt. It was now past lunch and there were talks where we might stop to eat. We had hunted hard for the past five hours. I wasn’t opposed to stopping to eat. We wound around a bend in the road and came to a complete stop, as slightly ahead of us on the left were three large nyala bulls. My pulse immediately started racing. Gerhard seemed skeptical but I was pumped.

“There we go!” I said. Once again Gerhard said, “Let’s go take a better look.” We quietly piled out of the truck which then continued on. The bulls were close to the road, but they never really spooked. They simply moved off into the thicker bush. We made our way over, and although they weren’t too far away from us, they were hard to see very well as the bush was incredibly dense.

I thought all three bulls looked great I just needed to know if we had finally found a nyala big enough to satisfy Gerhard. We looked them over for what seemed like forever, when Gerhard gave me a single nod of approval.

“The one on the left is a good bull.” My mouth immediately went dry. We crept around as the bulls moved even deeper into the bush Gerhard threw up the shooting sticks but when I got up on them, I was way too high up as the bulls went down a little ridge in front of us. We moved around. I dropped down to my knee, preparing for a shot in a kneeling position if I could find the bulls in my scope. It was tough trying to scan through the super-thick brush. I found the bull, but they kept changing positions and moving around. I finally zeroed in on the correct one. Gerhard and I discussed which bull I was on to make sure it was indeed the correct one. I was ready to shoot but I had to hold as there was another nyala directly behind my bull. The bulls were in no hurry and just milled about. My eyes got tired of looking though the scope. I had to pull off and let my eyes rest, and when I thought the animals moved I returned to the scope.

“Just wait, he’s starting to clear, wait.” I saw the other bull finally move from behind my bull.

“I got em. I’m gonna take him,” I whispered. Gerhard said, “You’re clear.” Finally, I was able to gently squeeze the trigger. The gun barked in my hands. The target in the scope was gone. The bush I was shooting through was so thick I wasn’t even sure I hit him, my bullet could have easily struck a branch and just whizzed by the bull. My PH told me to wait while he got the trackers to go look for sign. A moment later they were standing where I had I shot into the brush. 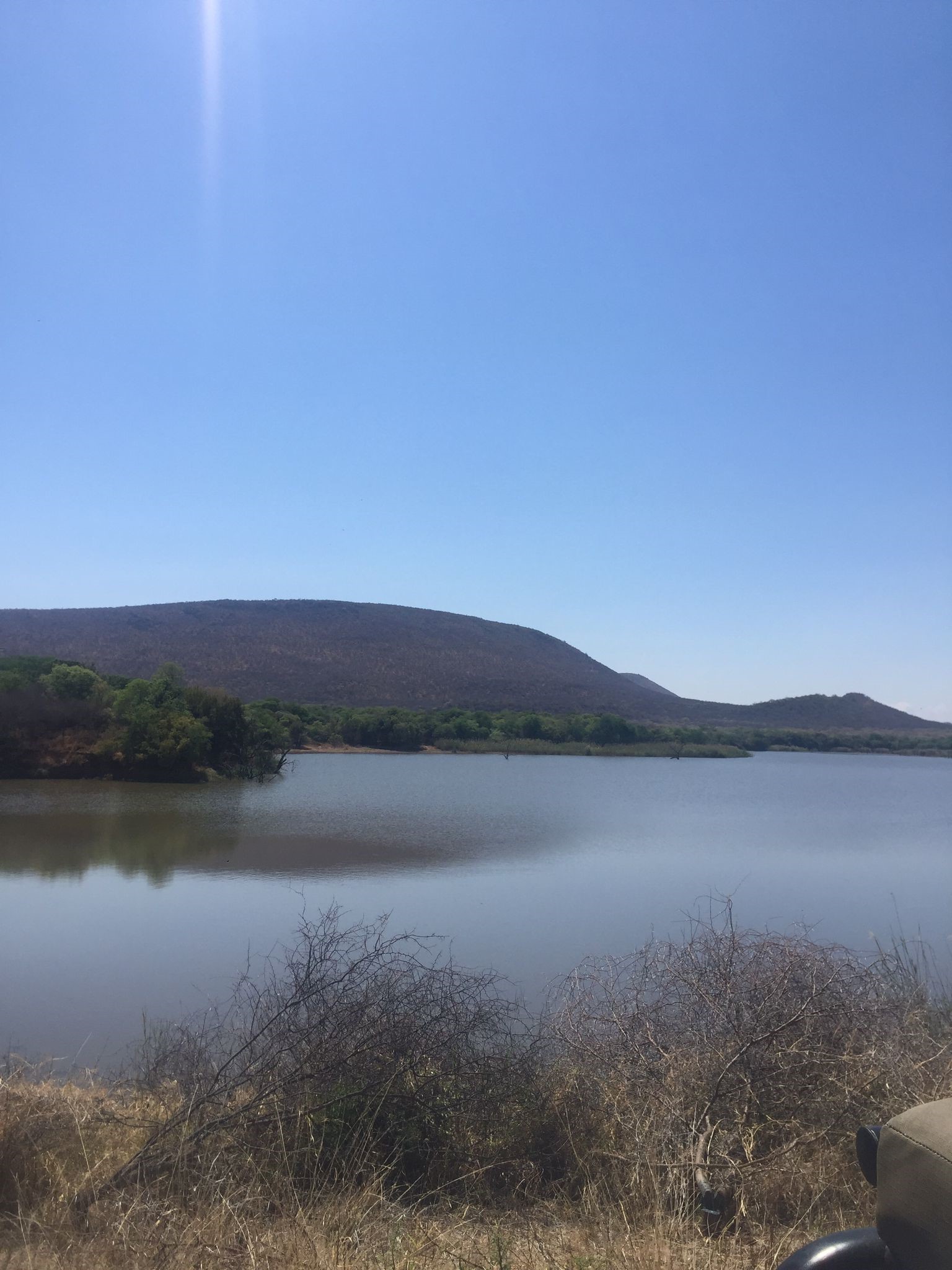 Above: Placid, peaceful lake on the property.

I left my position and went to where the trackers where checking for sign. I was frustrated, thinking that I shouldn’t have pulled the trigger, when they found blood. The tracker said that he saw two bulls running away. The men didn’t go but twenty yards and found my bull piled up in the thick bush.

We couldn’t see him from where we had been standing, it was just that darn thick in there. The sight picture I had in my scope had been clear, the shot was close, but with so much foliage you can’t help but question yourself when you don’t walk straight up to find a downed animal, and we had no blood. When we found the bull, he was still alive but couldn’t get up as he was mortally wounded, so with my PH’s OK I put in two more rounds to end it.

It was the first hunt that I had completed with my daughter, who was fascinated with the hunt. She was by my side the whole safari. The bull was a real trophy with beautiful, bell-shaped horns. I have had the good fortune of eating a lot of wild game meat, but nyala, I believe, is the tastiest meat I have ever had the pleasure of eating. It was just fantastic. I gorged like a man starving to death and ate until my stomach ached. It was delicious. Hunting with my daughter, taking a huge trophy bull, and eating the best wild game meat, it is no wonder why I love hunting so much.

If you want to take a monster nyala bull, I highly recommend booking a hunt with Monkane Safaris.