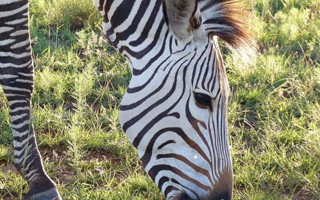 The Burchell’s zebra Equus burchelli, is a southern subspecies of the plains zebra. It differs from that zebra by a number of features, most prominent being shadow stripes which are overlaid on the white stripes on the African zebra’s hindquarters. The dewlap that is common on other zebras is missing. Burchell’s zebra stands around 52 inches at the shoulder and stallions will weigh between 550 to 600 pounds. Each Burchell’s zebra has a unique stripe pattern. When seen at a distance the stripes run together and the animal appears light brown.

Burchell’s zebra has the longest migration pattern of any land animal in Africa. They travel from the Chobe River in Namibia to Nxai Pan National Park in Botswana – a distance of 160 miles each way. Its habitat is open woodlands and grass-filled savannah close to water and has to drink regularly while grazing. Usually they travel in small herds of 10 animals consisting of the stallion and a number of mares and foals.  Excess males are booted out of the herd and form bachelor herds. A single 12-15 pound foal is born between November and January after a gestation period of approximately one year. Foals are weaned at 11 months.

Stallions and mares are almost the same size, so determining sex can be difficult. Listen to your PH as he’s had a lot of experience doing this. More than one hunter has shot a stallion only to see a sex change before reaching the animal.

Their major predators include lions, leopards, wild dogs, cheetahs and hyenas.  During migration, Nile crocodiles will hunt them during river crossings. Sometimes baboons will take a foal – however adults are safe from them. The Burchell’s zebra is a very formidable fighter with a nasty bite and a kick that can kill predators. They will stand their ground with smaller predators, but will try to outrun the larger ones.

Burchell’s zebra herds mix with other species such as wildebeest. They act as early warning devices for the highly skittish wildebeest. At night they will relocate to open grassy areas where visibility is good. While the herd sleeps, one zebra will be on guard, barking or snorting if danger is detected.

Hunting Burchell’s zebra in Africa will require patience and skill as they have incredible eyesight and will run if they sense danger. Their eyesight is excellent and whole the herd watches their surroundings. Approaching a herd without being seen requires the hunter to only move when there are no eyes on him. Even then, hunting Burchell’s zebra means you have to outwit them. As difficult as sex determination is, there are some hints as to which one is the stallion. When grazing, it will stay away from the herd.  When moving, the mare will lead and the stallion will take up the rear guard.

Should the herd be spooked and run, watch for the stallion to run for a bit, then stop and look back. There will be a few seconds when a shot can be made. Depending on what kind of trophy is preferred, different types could be hunted. The herd stallion’s hide will show battle scars and be worn. The young stallion or mare will make a better rug.

As with other large plains game, the .30 caliber guns with good bullets of 170-200 grains work well. However, there’s been a number of them hunted with the .30s that decided to run instead of go down. They gave the hunter a number of hours to appreciate the African scenery while tracking the wounded animal. A better choice would be the trusty .375 with 270 or 300-grain bullets.

The Namibian Hartmann’s mountain zebra Equus zebra hartmannae, is one of two species of mountain zebra. The other is the Cape mountain zebra found in provinces of Western and Eastern Cape in South Africa. The Hartmann’s is located in Namibia and Angola. Specifically, its habitat is the broken terrain east of the Namib Desert and the western parts of Etosha National Park.

It has black and white stripes on every part of its body except the belly. Mountain zebra hooves are hard, but wear fast on the rocky terrain, but grow rapidly to compensate for the extreme wear. On the Hartmann’s mountain zebra the white stripes are wide and the black between is narrow, just the opposite of the Burchell’s zebra. The mountain zebra is the smallest of the various species. Stallions stand three to four feet at the shoulder, and weigh anywhere from 500 to 750 pounds. Females are larger than the males.

Hartmann’s mountain zebras are grazers and consume leaves, bark, roots, grasses, fruits and similar. Their water intake is quite high, so they stay near sources of liquid.  They use their hooves to dig for water when necessary. Should the food supply dwindle, or water become scarce, they will migrate to find what is needed. They usually don’t form large herds, except near water where it’s not uncommon to see 200-250 zebras gathered together.

Herds number four to six animals: stallion, mares and foals. Mountain zebras sleep standing up with one of the herd always on guard duty. If bothered, they will run, capable of speeds over 40 miles per hour. They try to lose a predator by dodging through the rocks, or climbing which they are very good at, even up at high altitudes.

The average lifespan of a Hartmann’s mountain zebra is 23-25 years. Mares mature after two years; stallions usually take six years. The mare produces one foal after a year’s gestation. Foals can stand and run shortly after birth. The male foal is weaned away from the herd after 10 months, staying alone, or joining a bachelor herd.

To hunt the Hartmann’s mountain zebra, the hunter has to be in excellent shape. The terrain is rough, walking is difficult, and air can get a bit thin. The best chance to hunt one is to go along well-travelled paths to water holes early in the morning, or at last light. During the day the zebra will melt into in the shade and be difficult to find.

As with other zebras, the Hartmann’s mountain zebra is a tough animal. Minimum caliber recommended is .30, with preference to the Magnums and 180-200-grain bullets.  Larger calibers are better at anchoring a large male. Something in the .338 family, say a .338 Winchester Magnum whose 250-grain bullet is still cooking along over 2,000 feet per second at 300 yards, should put the zebra in the salt. The rifle should be zeroed to 200 yards.  Mountain zebras have excellent senses and closing on one to a sub-100 yard range is very hard.  Here, shot placement is all-important. Considering the terrain, doing a tail chase on a wounded zebra would be a great way to check out your heart’s stamina.

For a frontal shot, place the cross hairs in the middle of the neck equidistant from the forelegs. Side shots need to be placed one-third up the body and behind the foreleg.  Any higher than that could produce a wound, but not a fatal result.