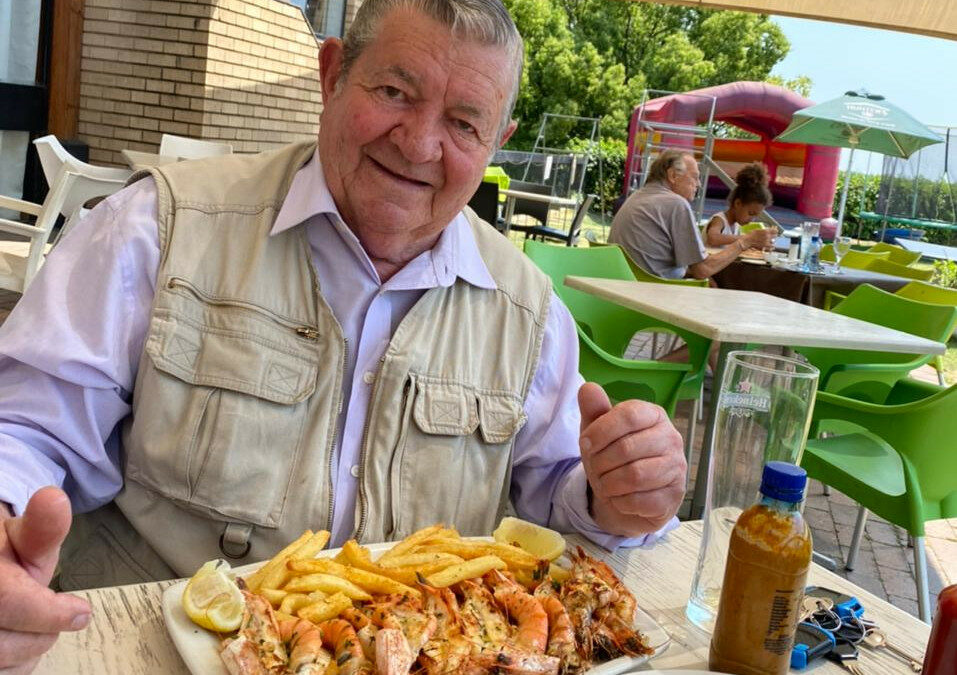 As I write this – John Ledger is fighting for his life in an ICU at a leading hospital in Joburg. He is either about to – or has had some big heart operation to try unclogging his arteries. It will be a tough ask for any surgeon as John, by his own admission has done a good job of clogging them up!

John won’t mind a little latitude and some humor, in the conservation section this month. He and I had a fantastic conversation this week, he was upbeat, has officially given up and not drunk a drop of alcohol since 21 October (to be fair that was when he had the stoke and was hospitalized – so he could at least have all the support he needed) and now says – “Rich, I have to really change my life now! After colon cancer, liver cancer and now a stroke, I have used up all my chances.”

No kidding I say!

The picture at our recent lunch sums up what was on the menu! It is hard to spot the salad – come to think of it, anything healthy on the table – but man, what a meal!

Anyway – our thoughts are with this great conservation giant and his family.

Not to miss an opportunity of showing exactly how Great Plains, under the leadership of Derek Joubert operate in their “conservation” world of eco-tourism, as they march on with their quest to stop hunting – I thought, let me deliver the facts for you all to read.

It is with reference to the Savé conservancy (arguably one of the great conservation success stories in Africa) who caught this chap out red handed – on his usual PR stunts. This time it backfired, and the losers will be the game – exactly who DJ claims to have front and center in his heart.  The subsequent pulling of the plug on a deal purely because of his PR stunt is going to be hard to explain but damn interesting to read!  Enjoy!

Great Plains Foundation and its staff have made numerous recent public statements that are misleading, factually incorrect, and damaging to the reputation of Savé Valley Conservancy (SVC) and Sango Wildlife Conservancy (Sango).

In 2022, the Savé Valley Conservancy and the Sango Wildlife Conservancy entered into a partnership with the Great Plains Foundation under which they committed to donate wildlife at no cost to the Rewild Zambezi project. The SVC’s conservation model based on the use of and funding by sustainable hunting proved to be highly successful. The relocation was prepared with anticipation of the ever-growing wildlife herds and the known inability to increase the SVC’s landmass at the same time. A Memorandum of Understanding (MOU) was agreed as the basis for this relocation of a total of ~2,700 wild animals, planned over a two-year period.

“…animals will die if they are not relocated…”

“…animals would be culled if they are not relocated…”

“…Climate change has made food and water scarce in the Save…”

“…Kill them or relocate them…”

In order to protect Sango’s and my reputation from the effects of this behavior, the consequences this might have for our credibility and reputation built over nearly 30 years, and our >130 employees, we felt compelled to terminate our partnership with the Great Plains Foundation.

After six successful relocations of wildlife in the past (including 100 elephants, rhinos) and the proof of how good conservation through sustainable use besides other successful models use can be, Sango will do everything in their power to assist and help find safe destinations for the remaining animals of this project and in the future.

Detailed information about our conservation model, the situation in the Savé Valley and a list of “fact checks” of the misleading GPF statements is available upon request. Please visit our website for the complete statement: https://sango-wildlife.com/statement-by-wilfried-pabst/