Silhouettes in the Mist at Lake Mburo 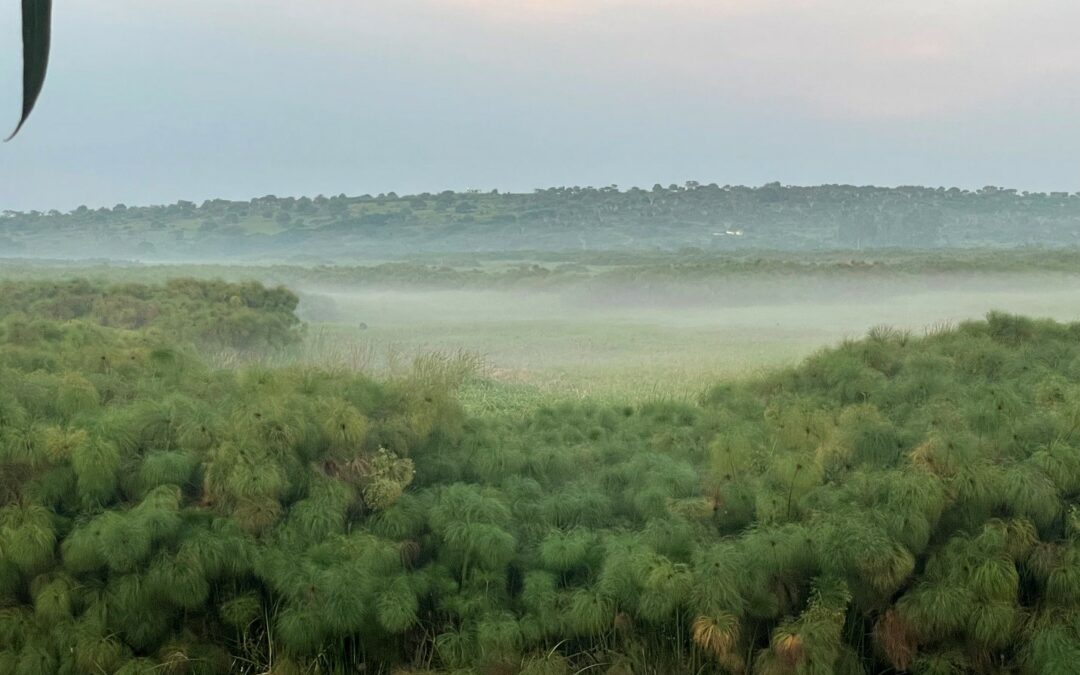 Abdullah in position next to the sitatunga and screaming in the mist.

I had met my friend Peter “Bwana” Chipman of Kwalata Safaris in Zambia at the Safari Show in early 2020 and made his booth my home for the three days that I explored the exhibition halls. I asked Bwana’s advice for other “must do” destinations in Africa, and he strongly recommended considering Uganda where there would be many unique indigenous species like the Ugandan kob as well Nile buffalo. He took me to meet Bruce Martin, the owner of Lake Albert Safaris to discuss it. When I saw the full species list included topi and sitatunga, I was sold.

A sitatunga hunt became my primary goal. Most African hunters have a passion for spiral horns and as my collection already included nyala, eland, kudu, kudu, and bushbuck, I confirmed my final species list as kob, topi and sitatunga and a Nile buffalo. The sitatunga is often referred to as the “Ghost of the Swamps” or the “Swamp Ghost” given their elusive nature in the natural habitat within the dense papyrus swamps. In fact, to hunt a sitatunga may take weeks to prepare when factoring the time to slash an opening in the papyrus swamps and to build an elevated platform, or machan.

I had heard that three sitatunga trackers, Abdullah, Kasozi and Matovu, all of whom were former poachers, had travelled from Sesse Islands to Lake Mburo to prepare the swamps for my arrival. Their task was to slash the papyrus in front of an existing machan two weeks before of our arrival. The slashing served several purposes. It created shooting lanes and open areas for me to see the sitatunga and it allowed time for re-growth which provided a highly desirable food source to draw the sitatunga into the lanes and the open. The last purpose was to allow time for all scent of humans to dissipate prior to our arrival which, in our case, was aided by heavy rains days beforehand.

My plan was straightforward – I was to spend each dawn and dusk on the machan until I was successful, or our hunt ended. All my late mornings would be on game drives looking for plains game, specifically topi. With the plan set, I met my PH, Charles at 4 p.m. to drive to the machan. On our way we dropped Kasozi and Matovu – each was positioned at two other machans, alternatives to mine. At our machan, Abdullah, Charles and I left the Land Cruiser, keeping scent and noise at a minimum. We settled in to wait as Charles said the sitatunga would not arrive until at least 6 p.m. – sunset being about an hour later. I glassed the area carefully and agreed with Charles on markers so we could communicate easily if necessary. There were three distinct dark stripes across the shooting pan – these were created by slashed papyrus that had turned dark as it dried. The closest stripe was from 150 to 175 yards, the second at 200 yards and the third at 225 to 240 yards. All three stripes were close enough not to have to worry too much about adjusting my vertical scope turret as my Griffin & Howe Highlander .300 Win Mag was sighted at 200 yards. At the right end of the first stripe, there was a large dark patch of brown slashed papyrus – this was our fourth marker at 175 yards. We still had time on our hands, so I spent it practicing resting my gun on the railing. I had realized that any movement on the machan would affect my aim – not great. 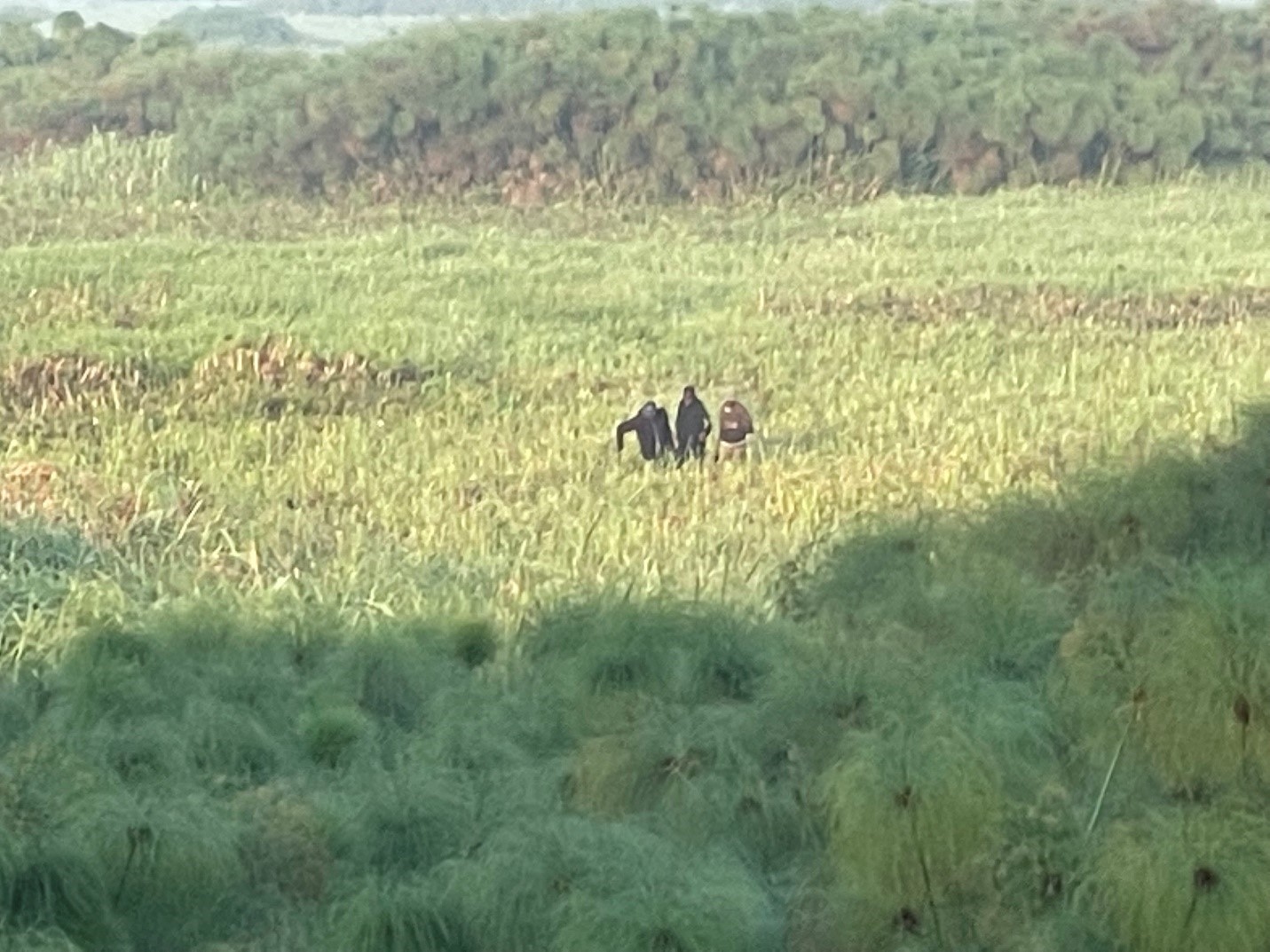 The three trackers retrieving the sitatunga with machetes in hand. 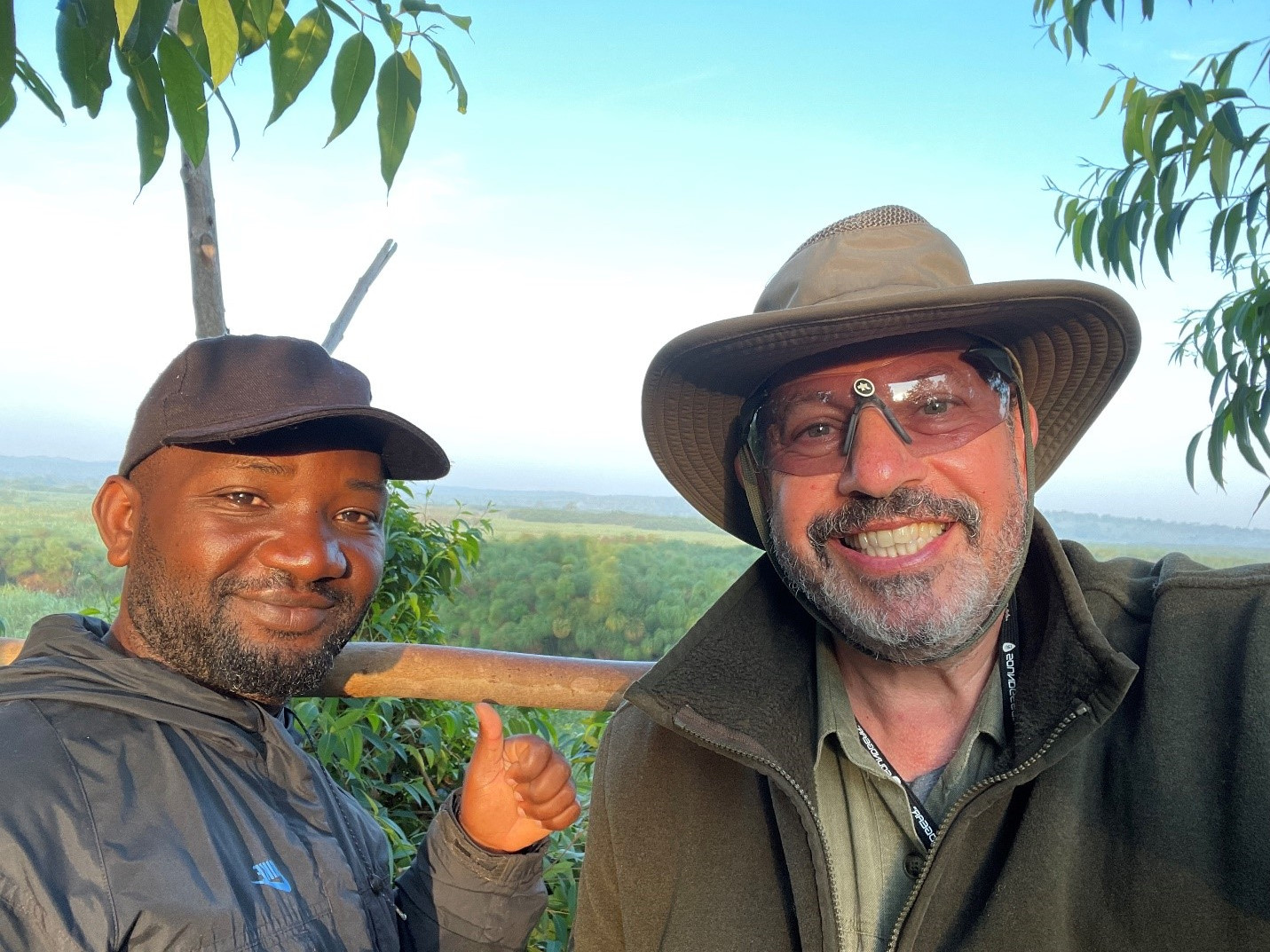 The author (L) and Charles on the machan waiting for the trophy to be retrieved.

We were briefly distracted by an angry hippo that appeared from the edge of the papyrus and charged the area next to the machan’s ladder. At first we thought it had gone for Abdullah who had remained below, but he was quick to join us on the machan and explained that the hippo had charged local villagers passing on the small dirt road just behind the machan. Thankfully no harm done – however, it did make me worry about our exit when it came time to climb down at dusk. As I anxiously waited for 6 p.m. to arrive, fifty short minutes later it was sunset, and Charles said it was time to go. Even though there was sunlight left, there would not be enough time to retrieve a sitatunga if we were lucky enough to see and shoot one. We climbed down without incident from the hippo, then back to the Land Cruiser and onto camp. Hunting sitatunga each evening meant we would arrive back at camp well into sundowners with just a few minutes to enjoy a cocktail and the campfire before dinner.

We planned to leave camp before sunrise to ensure we were settled into the machan pre-dawn, and next morning the wake-up call came early. Breakfast would be after the hunt. The morning mist across the pan was perfect for the sitatunga to venture out to eat, although it burned off quickly. The previous evening was relatively mosquito free until we climbed down from the machan where we were attacked. However, instead of mosquitos, bees visited us. By 9 a.m. there were several bees, but I remained calm despite their increasing number. Half an hour later, Charles and Abdullah motioned for me to ready my gun – there was a female sitatunga just below at the near side of the open area. She was not walking, rather hopping along, and took cover as quickly as she emerged. She was a brown color, quite different from what I was told the male looked like – she was also small. I stayed ready for another 15 minutes when the bee numbers became worrisome. Charles said it was too late in the morning and we should just return to the Land Cruiser. Thankfully, no incident with the bees, but we decided to bring insect repellant in future.

We sat for a while and enjoyed our breakfast as the air warmed, then off we went to find some plains game as we still had a good two hours before we returned to camp for lunch. We spotted the third of four priority trophies on my list – the most amazing topi. I had always been drawn to the topi’s red-brown color and black markings on the face and legs. This one turned out to be a particularly good specimen which exceeded the Rowland Ward minimum of sixteen inches. Clearly a successful morning, seeing a female sitatunga and taking a topi.

The evening session was the same as before, and although no sitatunga, there was a beautiful sunset to enjoy and, happily, there were no bees. I was not disheartened by the lack of activity – we had plenty of opportunities ahead. We returned to camp for the tail-end of the pre-dinner campfire, then dinner and bed. The next morning, back to the machan. The weather was noticeably different – there was more moisture in the air, and we saw lightning bolts in the distance which, Charles said, would make for a misty morning – perfect for our hunt.

By 6.30 we were settled into the machan. My gun was locked and loaded, but I had not put in my ear protectors when Charles and Abdullah told me to get ready – there was a male sitatunga in the mist heading from right to left in the large brown patch. I knew exactly where to look. I glassed and could see his silhouette. Just as Charles had predicted, the mist was noticeably thicker than the day before. Charles thought the sitatunga looked young. He used my binos to take a better look, and I used my scope to follow the animal. Charles told me to look carefully at the horns which were almost touching – not a perfect trophy. We could do better.

I checked the mist and spotted another silhouette coming from left to right on the second stripe just 10 to 15 yards from the edge of the papyrus. I told Charles, and before I could take a closer look, he said to shoot it. Gun resting on the railing, I put the illuminated crosshairs onto the right front shoulder and squeezed the trigger – the sitatunga dropped and disappeared from sight. My unprotected ears were ringing as I saw the young sitatunga on the right still walking as if nothing had happened. 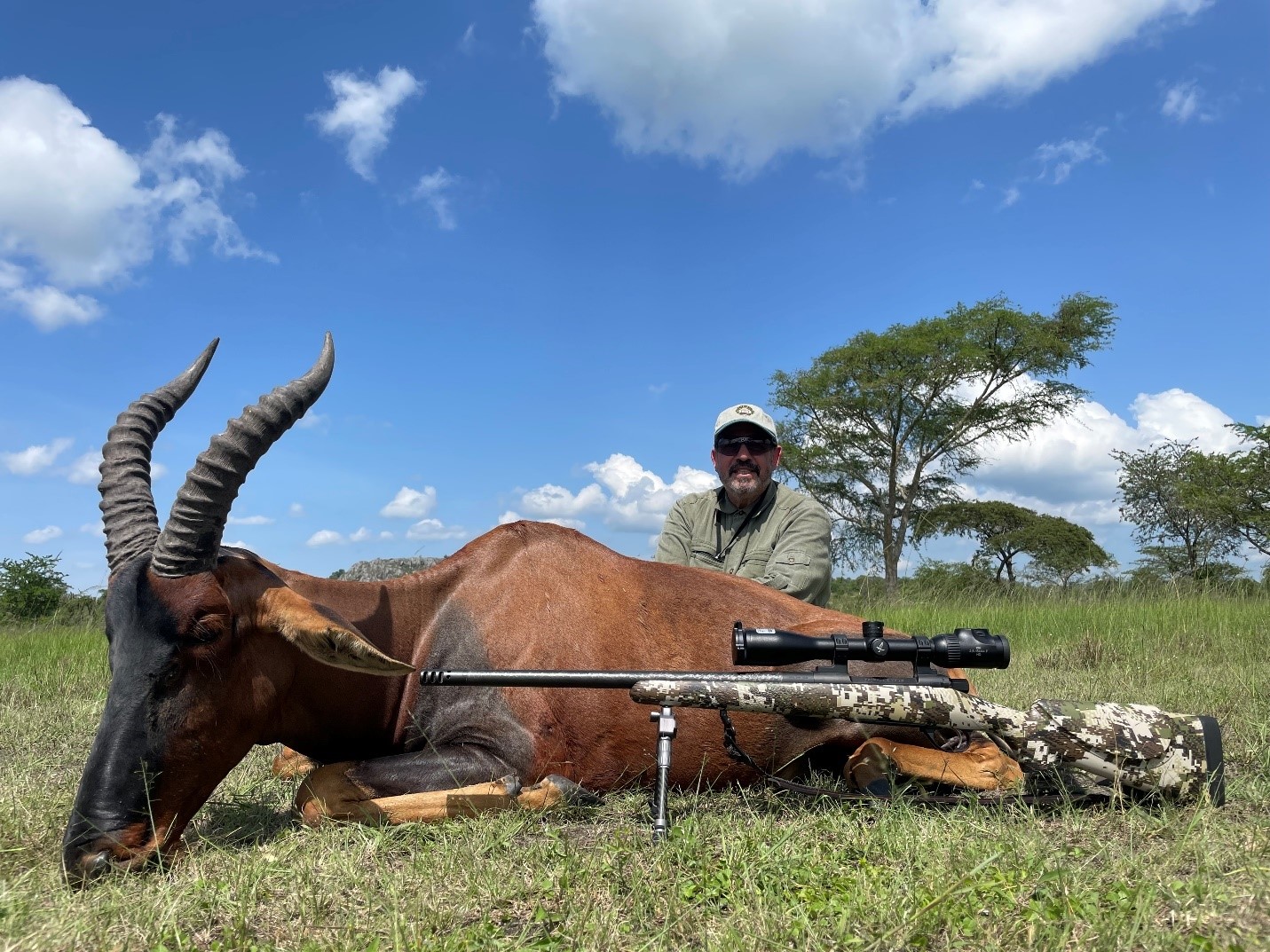 We took a quick moment to celebrate, then Charles called the Land Cruiser to collect the two trackers from their respective machans. Abdullah climbed down and disappeared into the papyrus with a long stick in one hand and machete in the other. I looked at my watch – only 12 minutes had elapsed!

Now we had two sitatungas in the mist – the young bull and the downed one. We saw Abdullah briefly in the open, then he was hidden again by the mist. The moment he spotted the sitatunga Abdullah yelled for joy and did not stop for the next few minutes. Charles said he knew it must be a good trophy as the reaction of the tracker always indicates its quality. Then the Land Cruiser arrived with the other trackers.

As Kasozi and Matovu made their way through the papyrus into the open area, they followed Abdullah’s shouts. The mist was slowly burning off, and we could just see Abdullah. I ranged him at exactly 200 yards. The three trackers joined forces to extract the trophy from the swamp. We could just make out the head of the sitatunga as the three trackers wrestled with it while navigating the water, swamp, and thick papyrus. Thankfully, they did not encounter any pythons. As the three emerged from the papyrus with the sitatunga, we could finally see the trophy. It was indeed a good one.

They brought it near to the Land Cruiser – we needed a place to display the trophy for pictures. The morning sun was still low enough for great photographic light. The sitatunga was wet and even the horns which were lighter colored than normal, glistened in the sunlight. We took many pictures with all of us getting into the act. Once the photo session was done, the sitatunga was carefully loaded onto bush cuttings lining the vehicle, its horns tied upright to protect them on the drive back. I saw Kasozi cut a lot of papyrus which I was told was to cover the sitatunga – I did not think any more of it.

I had sent an early photo of my trophy back to Bwana and Bruce who were still having their breakfast in camp. As we approached camp, the trackers held up the papyrus and start to shake the pom-pom tops. As we drove into camp, everyone broke into song – the celebration began. Bwana filmed me raised up in a chair, a papyrus pom-pom on my head. I was handed a beer and I was paraded around camp to a song in the local language – the only words I recognized were ‘’Ricardo’’, ‘’sitatunga’’ and ‘’America’’. 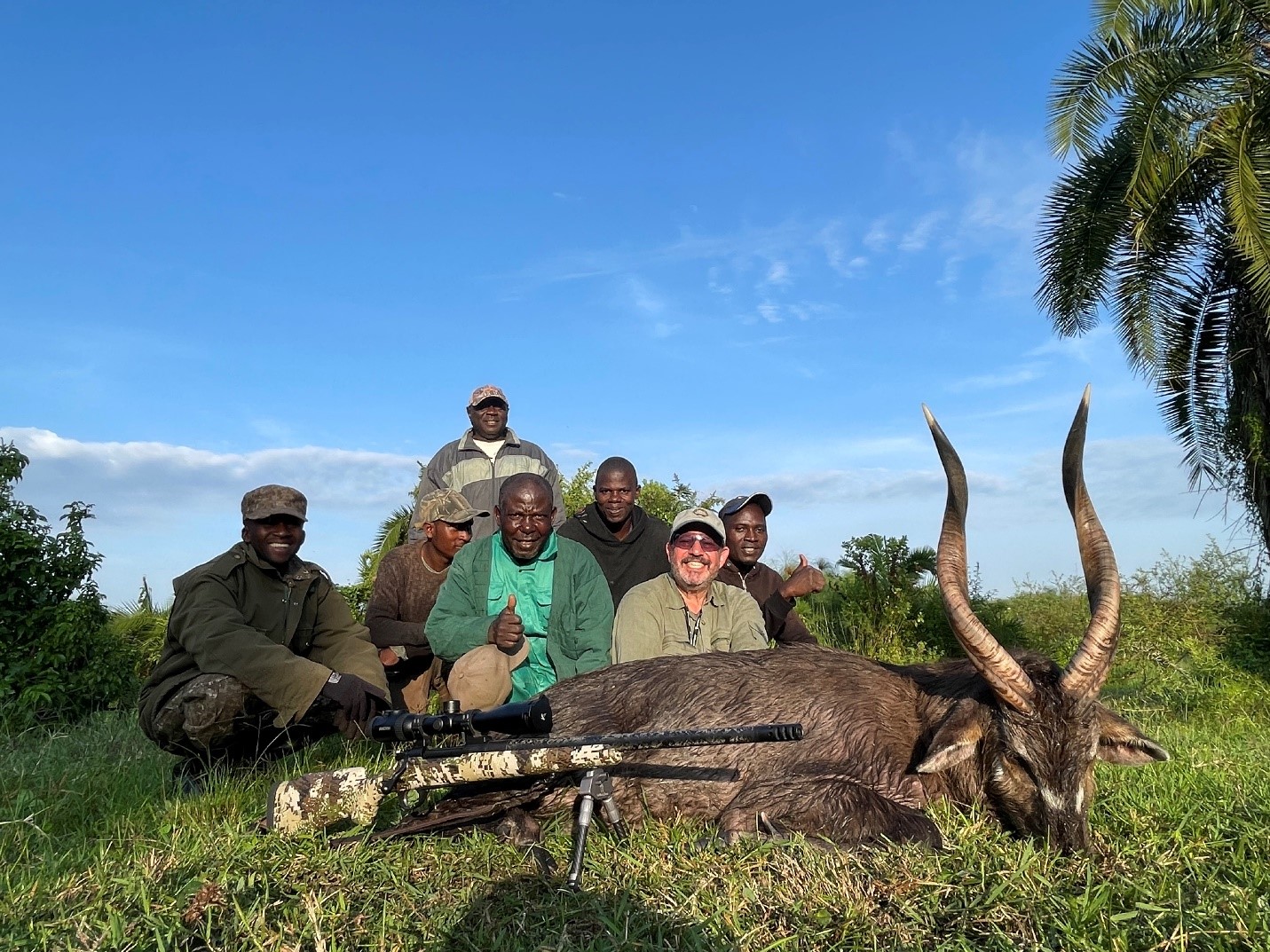 A very happy hunter and crew with a spectacular trophy sitatunga.

We took the trophy to the skinning shed for a quick measurement and to study the aquatic hooves. Sitatungas are built for the swamps in almost every way.

Later we replayed the morning – the preparation, the hard work that paid off, the trackers, and especially the mist, which was what Charles and Bruce and hoped for.

For me, there are two lasting memories – the first is the image of two bull sitatunga silhouettes in the mist at Lake Mburo. That image is forever etched in my mind. The second was learning that this successful hunt was Charles’s first sitatunga since obtaining his full PH license – a memory we will both share for the rest of our lives.