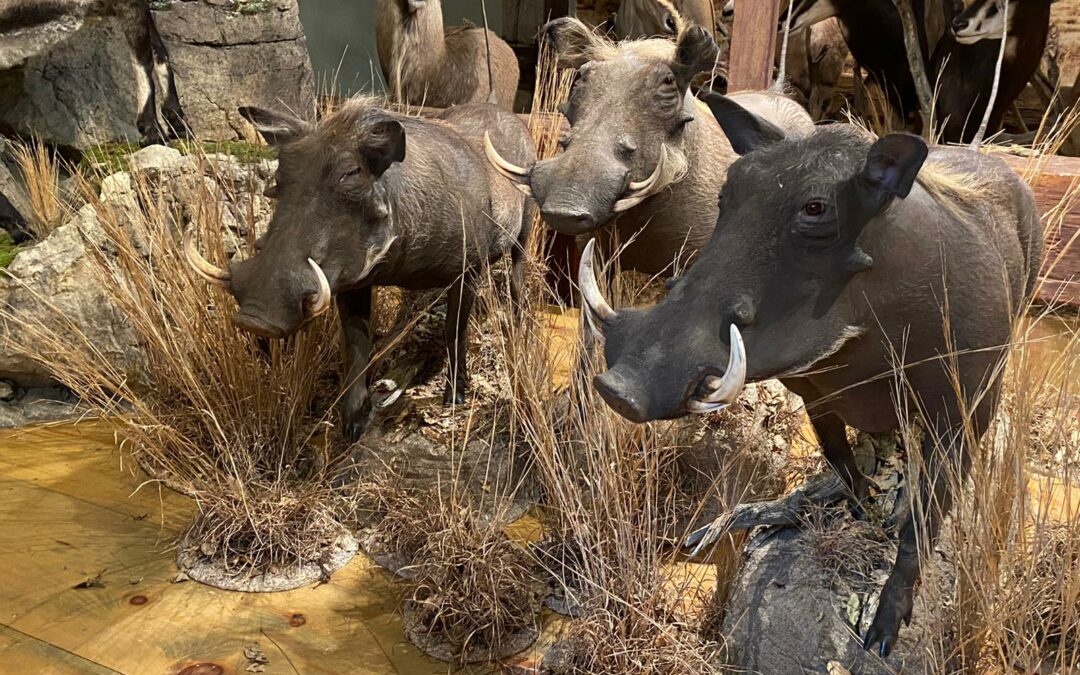 Taxidermy is my life

I got into the industry when I was quite young as I had worked for a furrier when I was just a boy.  I had always been interested in taxidermied animals, and first started when I used a mail order from the back of a hunting magazine for a booklet on taxidermy. It was quite accurate though I think a little tough to understand for someone not trained in taxidermy. However, the illustrations and the tools they used for tanning were correct.

Just as I was getting ready to go to college, I worked for a famous local taxidermist, Louis Paul Jonas, from the American Museum. He had a studio north of us, about an hour away, and they did very simple work. They didn’t do any advertising, but their archives and what they had there was everything and more than you could ever imagine – like a museum studio.

Jonas died while in his 40s, and his clients were dispersed. Then I got a very famous Austrian gunsmith who dropped off a chamois for me to work on, and this was just as I was starting to work at Jonas’s former commercial studio in Mount Vernon, New York, down in the city. The studio was orinally the Tiffany glass factory before it moved to Long Island, so the place had a lot of history. The Austrian said if I wanted to really learn taxidermy, I needed to work for a place in a museum studio.  We didn’t know each other, but he’s still a big friend of mine, hard to believe, 30 years later.

I went down there for a job interview and looked around.  There was some archival stuff there, up to the roof – a lot of businesses had been there for 50 years or 60 years.  There there old collections of work to be refurbished, and stock. They were overflowing with James Mellon’s trophies, that famous author who wrote African Hunter.  There was amazing sculpture work and things from the original museums. The big elephant head that was there was probably one of the first reproductions. It looked like fibreglass, but made of papier maché and it was signed by all three Jonas brothers. It was was just so amazing.  I never really realised taxidermy even went to those levels.

The person who interviewed me for the job at Jonas’s studios in New York, formerly Louis Paul’s commercial studio, was Steve Horn.  Once I walked in the door, I was 100% sure that was what I wanted to do for the rest of my life, and  it’s not too many times in your life you’re that clear about anything.  He made me call back there seven times to come get that job. I laughed because he said to me, “Well, what do you think you’re worth?” At the time I was 20, finishing my third year of college. I told him I had worked for a fur buyer when I was a kid. I did piece work for him, so by 12 years’ old l was trained in skinning animals using a beaming knife. I was probably making $10 an hour every day and it was an erratic schedule.  I put in a lot of hours, and if necessary had to work on Christmas Day. It was fine, because that was my job, even as a young boy.

He said that someone had just left and there was an opening for the shop. It wasn’t really as an apprentice, but Steve said, “You’ll learn a lot, you can work with these other taxidermists.” I was paid $4.10 an hour. I had to drive an hour and 40 minutes to work every day.  So every week I wouldn’t really even take a pay cheque, I would just buy materials because I was doing taxidermy then, so I would buy pastes and have tanning done and things like that.  But I worked there for years and I learnt a lot. I met some good, interesting people, and then as I progressed, I searched out other people in the industry, people that were connected to places that were very good in certain facets of taxidermy, like African work or doing cats. I would go work for them for free and then come back and I would retrain my men and change our material.  So I did that probably three or four times in my life before I was 30.

At one point we were hired to work on Cabela’s projects and there was a pretty famous taxidermist who was handling those jobs. I had a tremendous amount of inventory that I had purchased over the years, and I kind of stepped into this strange job from this eccentric guy who wanted to build a Cabela’s type store, right in-between the two Cabela’s stores in West Virginia. They were going public, so they were making a big splash. We do all North American taxidermy, but when we got an opportunity to actually work for Cabela’s, they hired me to do exclusively African work.

Of course, African work is always the hardest with the highest level of detail, and I was really fortunate, because that’s when I met Wayne. They had sent their agents to collect skins and they made some deals with some guys in South Africa, game ranchers. They said, “Oh, we need kudus and this and this and this,” and they gave a laundry list.  But the problem was, the first two times the skins came back, which is what they handed me, they were average-sized animals. The problem was, they wanted record-book-size horns which could be made as reproductions, but the skins were too small.

So I told him I had the inventory covered: “Why don’t you let me just supply the inventory, supply the grasses, the African birds, all the skins. I’ll do the reproduction horns so we have them from record-book-size animals.  I’ll handle this for you, you don’t have any problem.”  They agreed.

That helped me.  Through those years I was able to do almost all African work for Cabela’s.  I did a few other things for that Pennsylvania store, but they didn’t want to have one person handling everything.  Africa was my thing.  And then it also helped me to go to Africa and collect animals and spend a month over there with Wayne. He liked what we were getting, mostly skins, and I got the experience of hunting and vacation, and kept my own horns and skulls, and we used reproduction record-book ones on the animals in the bigger mounts in the stores.  And then after that we did a lot of regular client African work, as well as North American work.  On one occasion I was at Safari Club and had a big glass case with African birds in it, all the stuff that you see in a bird scene.  I had maybe 15 birds in a case and a man walkedup to the case and said “Wow! I need those for my museum. Are those for sale?” I said, sure.

“I’ll take them all,” he said, shook my hand and said, “I’m Johnny Morris.”  And that was the beginning of our relationship and he hired us for the African exhibits for him, and I think we did just short of 300 life-size animals for that museum.  There were a lot of different parts of it that would take some expertise – not just doing it, but having the right brokers to bring these trophies in from outside that had been sitting in Africa for a long time. But we were able to get all that stuff done, as well as do some reproduction animals for him that were impossible to find, and do some restoration work on some things that were very complicated.  Anyway, so it’s the African work and it’s what we do mostly.

Favorite animal? Almost everybody says cats because they’re complicated, and we absolutely have done lots of them. For me personally, my honest answer is, I don’t really have anything I would say is a favorite, but I like high detail and I like craftsmanship and natural positions on things, so I could say cats. But I don’t, because they’re probably the focal point in taxidermy. We’re not really doing any elephants or any lions, so that would have to mean leopards.

I think even though we’ve been fortunate enough to work on Cabela’s African displays and Johnny Morris’s African museum, and people with world-famous sheep and mountain scapes, we still do lots of normal work for people as far as African safaris and small safaris are concerned. We enjoy working with people when they’re new and when they start their trophy rooms and they start that journey of hunting of a lifetime.  You start somewhere and start small.

And then we end up re-doing their trophy rooms, and we usually work for these people for most of their lives – and that’s true.