The One that Didn’t Get Away 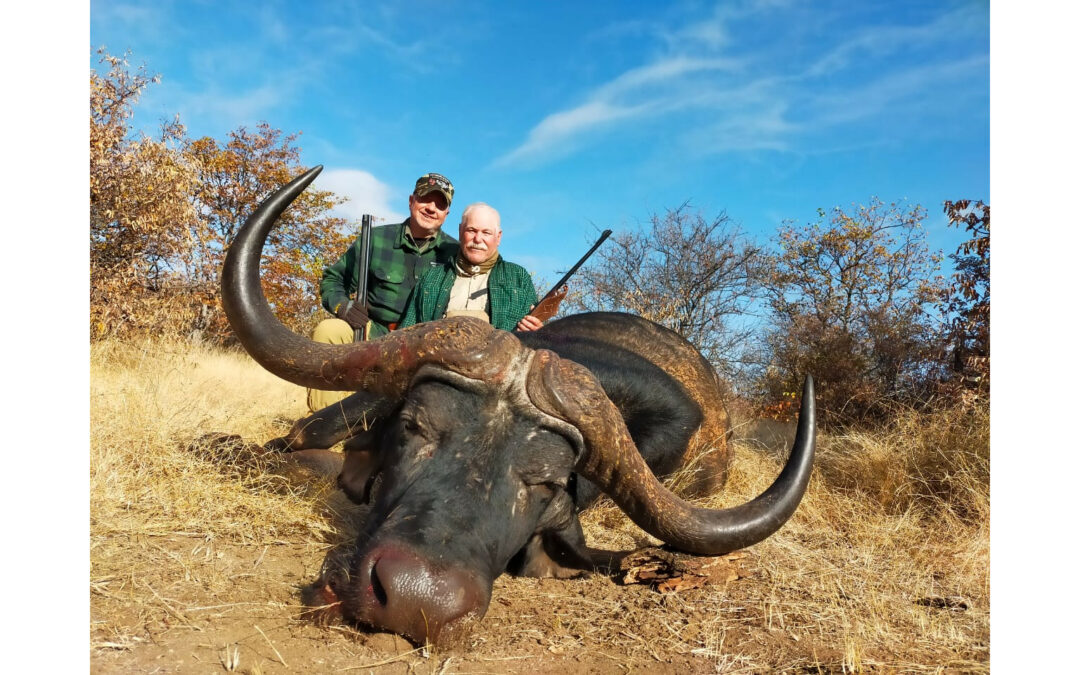 It had been a hard hunt to this point. Five days into a ten-day safari, and still not a quality bull spotted. Richard, our client, was cheerful as always, never doubting that we would persevere to the end, but those of us in the know were becoming a bit anxious. Day in and day out we had spotted, tracked, crawled, snuck into, and engaged dozens of buffalo bulls within the large herds we were hunting. Still, no dice. Everything so far had been soft-bossed and too young to consider. Where are the big boys, I pondered as we discounted another group of six bulls not up to snuff. Returning to camp that evening, I decided that we would make a new plan and split our resources to cover more ground and find more buffalo.

The following day I left camp at 4:30 a.m. determined to find a shootable bull, and headed south to check out the larger waterholes and other areas known for buffalo, while Richard and our PH Jannie would scout in the denseness of the northern parts of the property. I would radio if I spotted anything, and if not, we would meet back at camp for lunch and discuss an afternoon plan. A fruitless morning ensued with me scouring every haunt and hiding place I knew of, but my hours of searching were a bust.

After returning to camp around noon, we decided to continue in the areas we had hunted that morning.  The property was huge with a few hundred buffalo, but they had to drink, and they had to feed.  We would make contact with a big boy if we were persistent. After lunch we were back at it, driving, checking for tracks, and climbing little rocky hills, glassing for buffalo, a familiar routine.

With me that afternoon were my daughter and son-in-law riding in the back of the Toyota, hoping to capture photos of game. My daughter, a professional photographer, was fully equipped with her long-range-lens Canon which could provide some nice marketing material if I could find good subjects. About half an hour before dark, I decided to check an old, dirt airfield that was close to camp. It was long, and open terrain surrounded it. We had often spotted herds of buffalo feeding adjacent to the field at dusk, and if I could find them there now, we’d have a good place to start the hunt the following day.

I drove to airfield road, searching the surrounding plains for any sign of movement. A quiet rap on the roof of my bakkie made me stop as I entered the airfield. My daughter was pointing across the field to an open area. Her elevated vantage point had allowed her to spot what was impossible for me to see: Buffalo!

I quietly exited the truck and climbed into the back where I could also see a black river of a buffalo herd coursing through the bush, feeding as they snaked their way towards a large waterhole three kilometers away. A rough estimate put the herd at around 100, and I could see, in the waning light of the day, several bulls. Though we prefer to go after lone Dagga Boys or small groups of bachelors, the large herds could also hold superb bulls. The obvious problem was getting to them, with the many eyes and ears of the herd giving an early warning of possible danger.

I hopped off the truck and, leaving my companions to take photos, moved cautiously across the airfield and began to glass the buffalo as they moved. As any experienced buffalo hunter will tell you, dusk is the best time to approach buffalo as it’s the only time of the day when they seem to get ‘stupid’ and pay much less attention to the things that they should.

I stalked to within 150 meters of the line of buffalo and looked for a candidate. I saw about a dozen bulls and identified at least two that appeared to be hard-bossed but, at that distance and with the lack of light, I was best-guessing, and as the light faded to near darkness, I returned to the truck to head back to camp. Little did I know that the superb optics of my daughter’s camera and the vantage point from which she was shooting would reveal a buffalo that I could not see from where I had been glassing – a real buffalo! A once-in-a-lifetime beast that would make even the most seasoned buffalo hunter sit up and take notice! 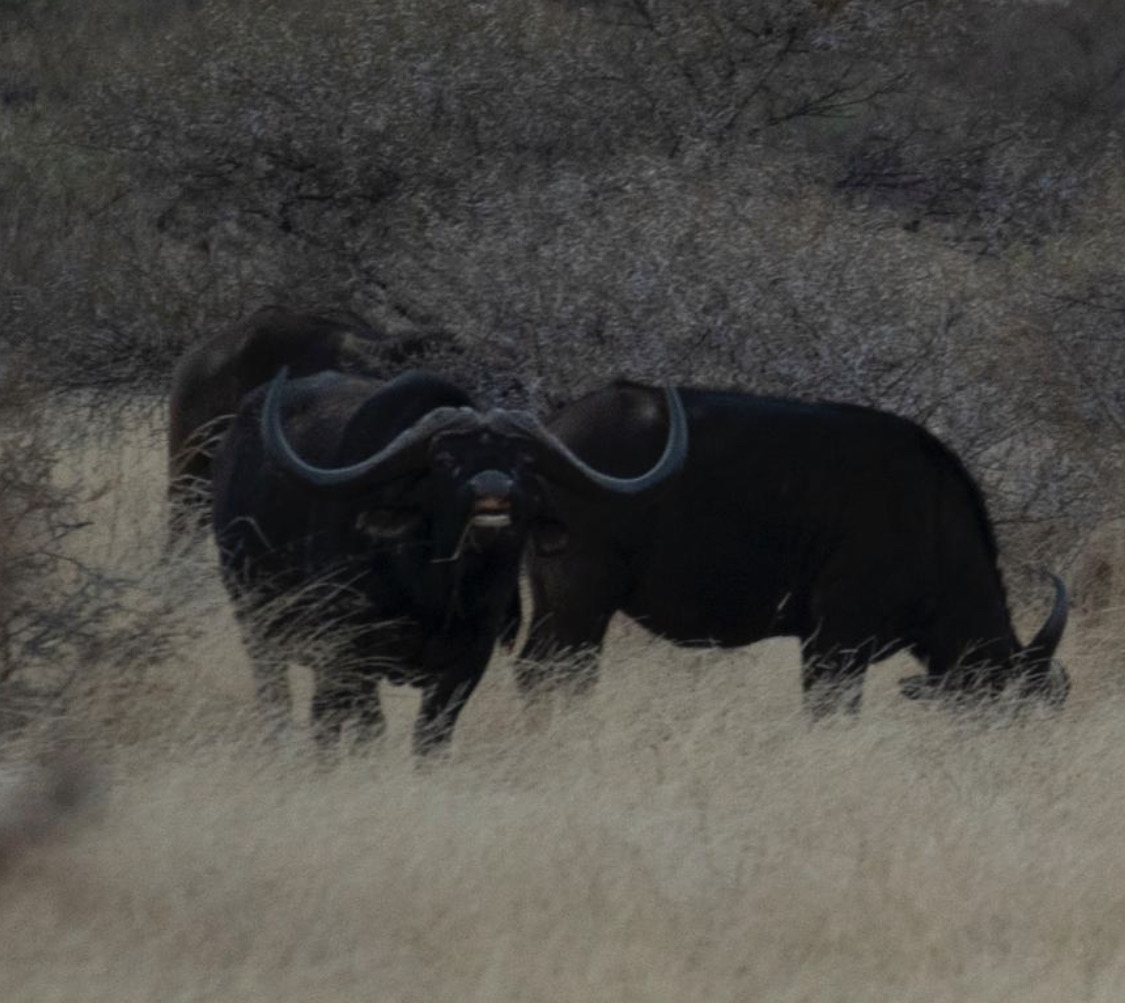 Back in camp, Jannie and Richard told of finding spoor and tracking a group of buffalo, but were stymied by fickle wind and alert noses.  I told them of our experience we had just had less than an hour before, and after my daughter powered up her laptop and began to download the photos, we all sat around the fire, sipping good bourbon, and waited for the results.  In about fifteen minutes, I got the downloaded pictures and after a bit of scrolling, I stopped and stared at the image appearing on the screen.

There it was. A photo of a tremendous Cape buffalo bull, with a hard-bossed

set of horns about 48” tip to tip. We had previously shot a few 45” bulls and one superb 44-incher a few months before on other safaris, but this one was bigger. I called Jannie over and we stared at the picture. The only problem now was a plan. Finding that specific bull in such a large herd would be problematic, and then actually getting to him would be another feat.  Taking this buffalo would require a lot of luck.

We discussed a plan for the next day, and given that the big bull was traveling with a herd of around 100, I thought the best option would be for Jannie and Richard to continue with the spoor of the small bachelor herd they’d found the day before, while I went out to try to find the big herd. The odds of stalking into such a large herd and bagging that bull were slim. The only hope was to find the bull either in front or along the fringes of the herd so that we could stalk from the flanks or ambush from the front. Jannie agreed. There were good bulls among those bachelors and Richard also liked his odds much better with them.

We were off before daylight. I returned to the airfield and followed it to the end, walking out into the bush east of the field and going in the direction the buffalo would have likely crossed if they were heading towards the large, natural water pan a few kilometers away. There, I found the tracks of the herd that had crossed a dry riverbed and turned west towards the water. Returning to my bakkie, I drove to the waterhole and found where they had entered the area through a gap in the bush that led out to the water. The entire perimeter of the little lake was saturated with buffalo spoor and, unfortunately, it appeared that it was here the herd had split up and broken down into smaller groups as they finished drinking and disappeared into the bush.  The big bull could be anywhere now.

I thought about what to do next. I knew that the herd had likely originated the night before from an extremely thick, inhospitable area we called ‘The Chad’ and that many would likely move back into it during the day. It was a huge block of bush that the buffalo loved as it gave them great security during the bedding times of midday. This bull was fully mature and hadn’t grown to his size by accident. He would likely be one of the beasts that would seek out the Chad for rest. I started the truck with hope and a plan.

I drove to the northern end of the airfield, and while I was searching for tracks to indicate that some buffalo had headed back towards the safety of Chad, I caught a glimpse of an approaching buffalo. As I crouched behind a small clump of grass, the young bull stepped out into the open and then back into the bush, heading away from me. With my binos I could see that there was another bull with him but couldn’t determine anything more than that.  Could this be the big bull?

I crawled back to my hidden truck and tried repeatedly to reach Jannie or his tracker on the radio. After minutes of calling, the base station at camp picked up my call and tried to relay my message: “Buffalo spotted, come to airfield.” Jannie’s tracker responded, and in about half an hour the group arrived, a cloud of dust in their wake. I told Jannie and Richard of the situation and said that I could only verify that two buffalo bulls were slowly moving from the fringes of the airfield east of our position, staying in the bush along the side of the dirt road that ran perpendicular to the field.

Jannie got his team organized and, with his tracker in the front, led Richard slowly down the bush line, glassing the edges as he went. In less than a minute a young bull appeared from the bush and walked out into the open. Shortly, another bull emerged from the thicket, it, too, a youngster. Jannie and team froze and crouched behind some high grass. I stayed back about 50 meters, not wanting to add to the noise and scent of those in front of me. Suddenly, the two bulls moved back into the bush and disappeared. Not spooked – they had just moved into cover.

I watched as Jannie and the group moved further down towards the area where the bulls had been, and as they were moving, the huge bull from the night before appeared, and walked directly out in front of them. It then crossed the dirt road, and vanished into the bush on the far side. No hesitation at all in his gait, just straight across and gone. A nervous pit began to grow inside my gut. Had we just blown our chance at this magnificent buffalo? Jannie and Richard lay prone in the grass while I held my breath and hoped. Moments passed and then, as if summoned by the gods of luck, the big bull reappeared and crossed back towards the two youngsters. When he reached the perfect angle for a shot, Jannie got Richard into position. He grunted.

Relief washed over me as I realized the bull was ours.