A Long Day in Limpopo 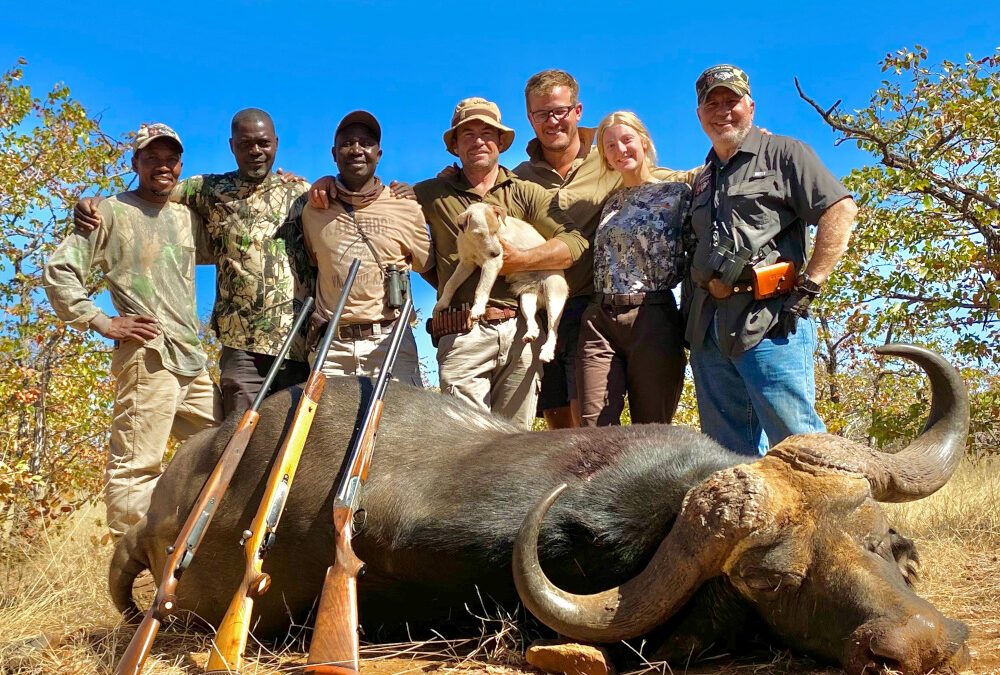 It was one of those long, tiring tracks all too common in buffalo hunting. The kind of track where you’re happy to have worn your most comfortable pair of boots and slept well the night before. You know it’s coming, it’s just a matter of when, but as the years accumulate on an old buffalo hunter’s body, it becomes a more daunting prospect each season.

I woke to a brisk morning that day in July and was happy to be going on this hunt. We needed just one more buffalo, and this camp of seven buffalo hunters, would be complete. So far everything had gone well, with each bagging their bulls with single, clean shots, something a bit unprecedented given the disposition and invincible spirit of these beasts. Now, we were down to the last man (or should I say woman) standing.

Shay came to Africa with her grandfather, the lone female in a group of professional bourbon drinkers from Kentucky.  She presented a stark contrast to her older companions, most of whom couldn’t form a sentence without the use of one or more minor profanities. She was a young, fit huntress, possessing a keen wit and contagious sense of humor, and proved more than capable of going toe-to-toe with her boisterous compadres. Any fears I may have had at having her around the nightly campfire with these experienced jokesters were quickly alleviated that first night. She could hold her own.

In the days leading up to her buffalo encounter, Shay had bagged a few nice plains-game specimens. A kudu bull and bushbuck along the Limpopo River, an impala, sable, wildebeest, warthog, and crocodile were resting in the salt. Now, we’d pursue the big prize, a Cape buffalo bull. The day before, I had accompanied one of my company PHs and his client as they bagged a superb 43” buffalo. Running with this bull was a tank of a buffalo, big and ornery, and unwilling to leave his fallen comrade to our recovery. Time and again we would attempt to approach the slain bull only to be rebuffed by the aggressive nature of this beast. Finally, he was driven off and as we admired the downed buffalo, I made note of the location and direction taken by his angry mate. If we could return at daylight and take his track, we might provide a special day for Shay.

Around 4:30am we were up and making ready. Coffee and a hot breakfast were consumed followed by the loading of cooler boxes that saw us off and into the bush. It would take us around two hours to get to the point where we had left the buffalo, but as we were traversing an old two-track to our tracker’s camp, we found him, all alone and feeding along the edges of a clear cut. There was no mistaking the body size.

We drove past the old warrior and continued a short way to a small campsite where we picked up our tracker and, not wanting to spook the buffalo, we ‘hotfooted’ it back down the two-track and slowed our pace once we approached the edges of the clear cut. Slowly, we crept up the edge of the old dirt road, straining our eyes for a glimpse of the bull. When we arrived in the general area of where we had spotted him, he was not there. Could he have been spooked by our driving by?

We moved into the bush searching for his spoor. Suddenly, our tracker slowly raised his arm and pointed to a brush pile not far from us. Bingo! There he was. The old man had sauntered off a bit, preferring to finish his morning meal on the fresher grass on the other side of the clearing. PH Jannie moved forward and put up the shooting sticks. Shay secured her rifle while I took a position beside her, my double at the ready. The buffalo moved forward as he fed and made his way to an opening, presenting a decent shot. Shay took her sight picture, and when the word to shoot was given, squeezed off a shot that struck the bull in his shoulder.

Whack! came the sound of the impact causing the buffalo to lurch to his left. Boom! came the second shot which hit him high as he labored to escape. I ran forward and pulled off a single shot from my .470 which dropped the bull momentarily. As he rolled to regain his feet, Jannie sent 500 grains into him as well. Before any further shots could be delivered, the bull disappeared into the thicket, moving with a distinct limp. I raised my hand to ensure all kept quiet as we listened for the death bellow indicating the end of his life. It was not to come.

“He seems to be hit pretty hard,” I said after minutes of silence. “Let’s give him an hour before we take up the track.” Jannie concurred and we sat there in the bush, a nervous pit swelling in our guts.  Not hearing the death bellow was concerning. While every buffalo doesn’t report his demise, most seem to bellow out their last gasp of defiance as they expire. This old boy wasn’t done yet, it seemed.

When the hour was up, we took to the track. Not knowing the fate of the buffalo, I sent Shay back to camp to wait on the verdict. I couldn’t see exposing her to the harsh reality of a buffalo charge and did not want to be the one to tell her grandfather that I had stupidly done so. Additionally, an inexperienced buffalo 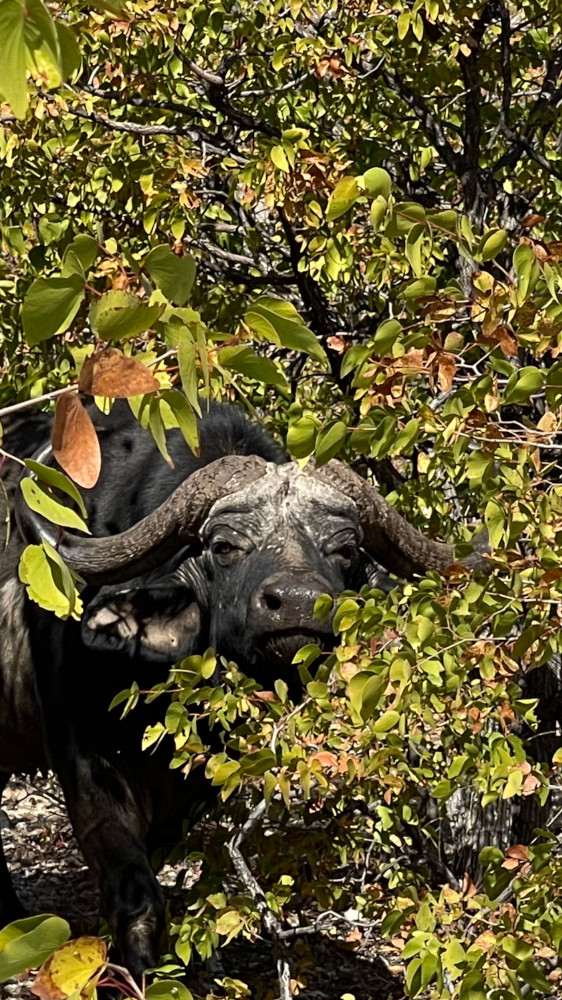 hunter amid such chaos would be a liability. Now it would just be myself, Jannie, and our tracker.  Two big bores against a potentially dangerous buffalo. I’d put the odds at even.

We found the track, and the blood spoor was significant. Steady and bright, it led us into a dense thicket, our progress hampered by the “wait-a-minute” and tanglefoot. As they usually do, this wounded buffalo was taking us into the worst of it. After we had tracked a half mile or so, my hopes of finding the bull dead had diminished, replaced by the knowledge of what we were dealing with. Jannie and I became hyper alert.

Deeper we traveled into the jungle of thicket, knowing that at any moment, a greatly irritated bovine might make us regret our chosen occupations. We moved cautiously, as the best time to track and kill a wounded buffalo is generally the first time you encounter him on the track. After he knows you’re on to him, he’ll increase the time and distance between himself and his pursuers. Onward we moved, the spoor easy to follow. The amount of blood on the ground, and its color, indicated to me a lung shot, but if only one lung were touched, we’d be in for a long day.

After an hour of tracking, we came upon a small clearing within the darkness of tangle, and I heard a muffled sound of movement to our front and right. I raised my hand and pointed towards the sound, and as we carefully moved a bit further forward, rifles at the ready, we were met with an explosion of noise. It was our wounded bull. In a flash the beast crossed to our front and negotiated the little clearing before either Jannie, or I could get off a shot. We moved to where he had been standing and found a pool of blood. I shook my head as I knew this had been our best chance to recover the buffalo. Now, with his adrenaline up, he would move, and move fast.

Jannie and I spoke about the situation, and I told him that we must now press this buffalo. He wasn’t nearly as badly wounded as we had hoped and the longer we took on the track, the longer he had to rest and run again. We had to push him until he decided to stand his ground or charge so that we could drop him. With a quick sip of water, we were back to the track, searching for the decreasing amounts of blood among the tracks of a running buffalo. Six hours into the track we were still in pursuit, jumping the bull a few times every few miles but not able to connect with any lead. At about 1 pm I found a bit of high ground and cell signal, and reached out to one of our other PHs with whom our best tracker Hans was attached. I told him that we were five miles into the track (according to my health app) and that I needed Hans to join us for the remainder of the day. I also told him to bring food and lots of water.  The day was hot, and we were weary.

Within the hour, Hans arrived with the required nourishment, and after consuming it we were back at it, following the track along a dry riverbed further into the bush. The addition of Hans increased our speed significantly. He was on that buffalo like a fresh tick on a tired dog. We pushed on, and in less than an hour, found the old bull in some scrub mopane on the near side of a hill. When he burst from his hiding spot, I sent a round his way as did Jannie. Given the density of the mopane and the “hail mary” aspect of the shots, neither of us felt as if we’d hit him. Once back on the track we confirmed that no new blood was present and presumed we’d missed the bull cleanly. This beast was a magician. We pressed on until dark, leaving the track as it led uphill about three or four miles from where we’d last jumped him. I checked my app again and it read 8.4 miles of tracking for the day.

Back in camp I reorganized our hunt plan for the next day. I pulled one of our best PHs, Bradley, to come on track with us. Bradley had an ace up his sleeve that would prove invaluable, a little Jack Russell name Ruger. We also had Bradley’s tracker who increased our odds greatly.

At daylight the next morning, we hit the track with speed. Our trackers, along with Ruger, led the way, closing the distance between us and our prize. We were moving swiftly and eventually found where the buffalo had bedded. Blood was pooled in the bed and had seeped into the dirt and surrounding grass.  We continued the pursuit. Up one hill and down another, the buffalo plodded along, never stopping for a rest. Five more hours into it, and as we crossed an open flat, we heard the unmistakable barking of a dog at bay. Ruger had him.

We all ran now to converge on the bay, and as we came upon the little thicket which held both dog and beast, the buffalo dashed from cover with Ruger glued to his scent. Yap! Yap! yap! came the constant barrage of yelps and snarls as our fierce furry companion stayed true to his breed.  In minutes the huge bull put a half mile between us, the only gauge of his location being the sounds emitted from the dog.  Jogging as best I could to catch up to the scene, I was just behind Bradley and Jannie as their first shots rang out, anchoring the old warrior to the ground. As he was struggling to regain his feet, I sent two shots from my .470 into his scarred body, ending the two-day battle we’d had in getting that bull. A final health app tally showed 12 miles of tracking from initial to final shot.

We had earned this buffalo. 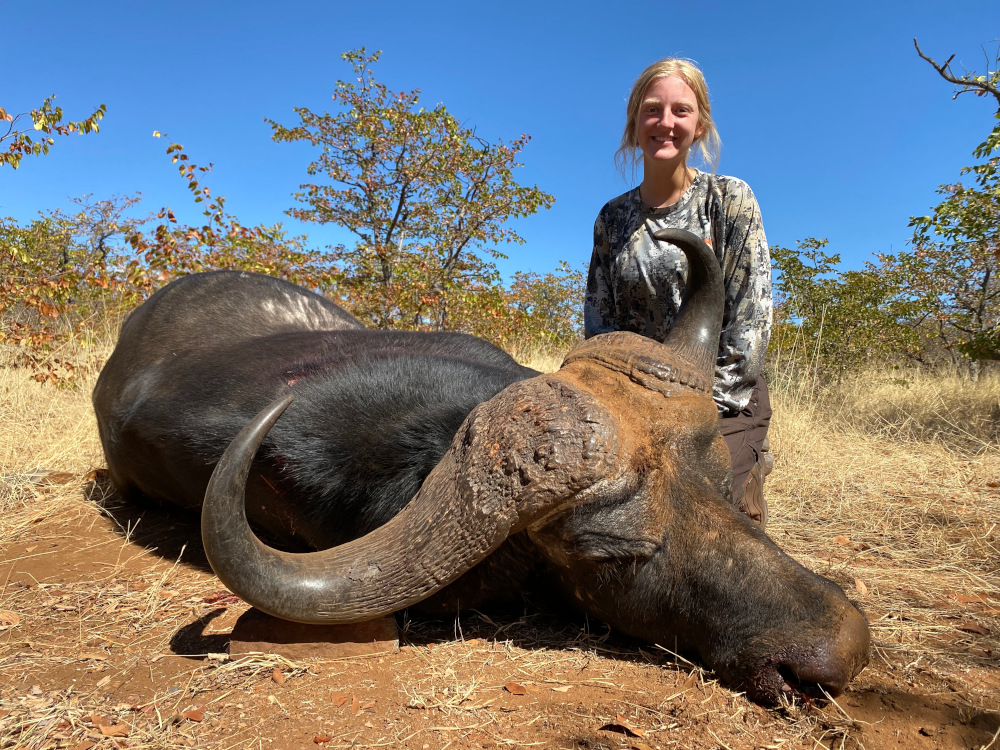