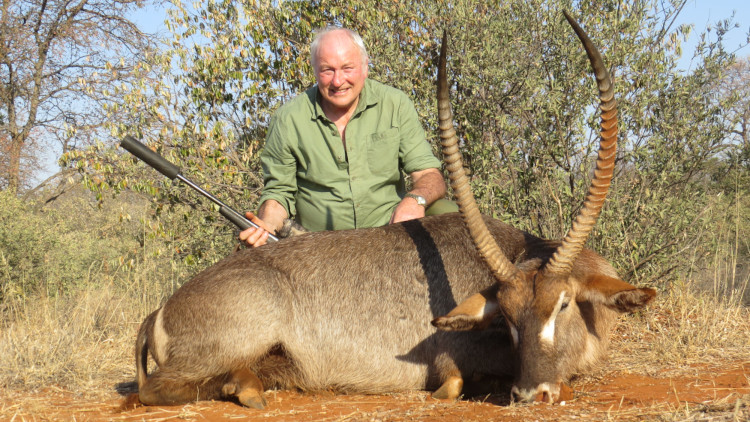 My Courteney boots puffed dust in the bushveld and left distinctive tracks, the solid rubber soles offering quiet tread— silent footsteps in the dirt. I’d learned the hard way that soles designed for comfort with tiny air bubbles injected in the rubber, amplify the sound of foot on grit, echo your approach, and spook prey.

Not that it mattered, because this particular waterbuck had the uncanny ability to hear the unheard and see the unseen and, once again, it vanished like an ace in a slick card trick. My PH Hennie and I had long since settled into a monotonous game of cat-and-mouse with this bull, and I despaired for an outcome in my favor.

“These big bulls,” Hennie whispered, “are super cunning – we just need to keep working this one until he makes a mistake.”

“Hopefully, before I die of old age,” I added.

We were four days into this safari, but the hunt for this particular animal had spanned three years. The area was renowned for good waterbuck sporting heavy-based horns with classic bell-shaped curves, so there was no reason for me to fixate on an individual bull, other than, sometimes it just gets personal.

Last year, I came close – oh so close – to taking this bull.

I host safaris for Kiwi hunters from New Zealand and had a number of keen first time antipodeans on this hunt, including my young son Daniel. Another father and son were on the safari, so we hunted together.  This day, Rob and young Norm were after kudu, or impala, or warthog, or gemsbok… anything but waterbuck, and they had a good chance of success with two PHs and another four pairs of eyes scouting the veld. 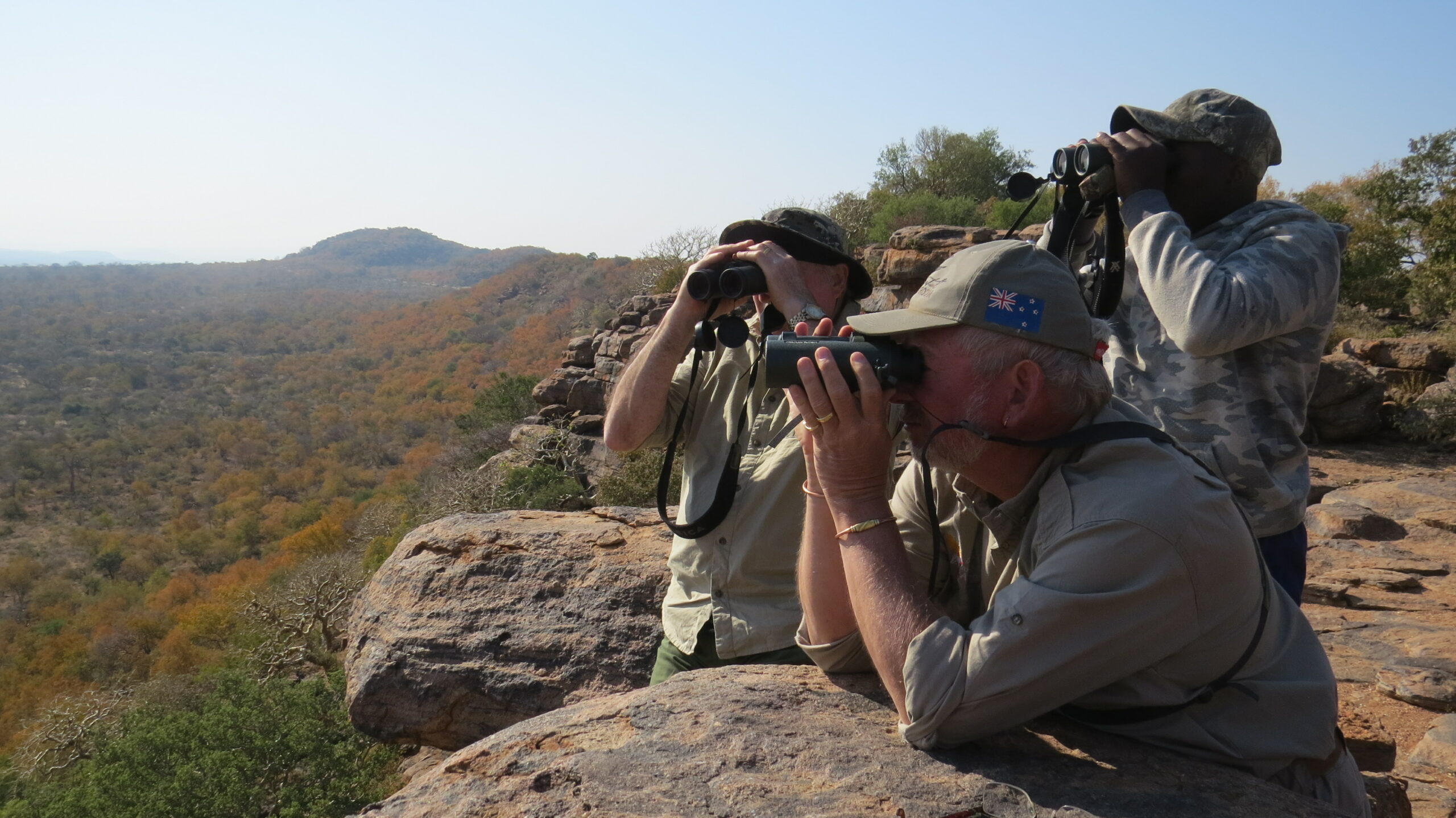 Earlier in the safari, I’d spotted a good impala and asked Hennie to execute the stalk for Rob and Norm, knowing the animal was on both hunters’ wish list. Hennie is a master on the spoor and slipping through the thorns, so I was surprised when they returned an hour later empty handed.

It transpired that they had quickly found the feeding impala and were waiting for the ram to present for a shot, when Norm had suddenly tugged at his father’s shirt. I could just picture what happened…

“Dad, Dad, Dad,” he hissed while indicating to his left with bulging eyes.

The largest kudu bull Hennie had ever seen had stepped into the clearing, not more than five meters away, and was looking down at them almost with an air of indifference.  It was number one on Rob’s wish list, but… he just stood there gawping at it.  Hennie broke the cardinal PH rule and hissed a staccato, “shoot shoot shoot shoot shoot” to no avail.

“Crimpy, you could see my heart beating through my shirt – the bull was a monster!”

“I asked why he had not shot it and the response was the classic, “It was the first day of the safari and seemed too easy!”

“Well, two things are a given,” I said. “You will never see that bull again.”

“Nah,” replied Rob, “I know exactly where he lives.  What’s the second thing?”

We never did see that kudu again! 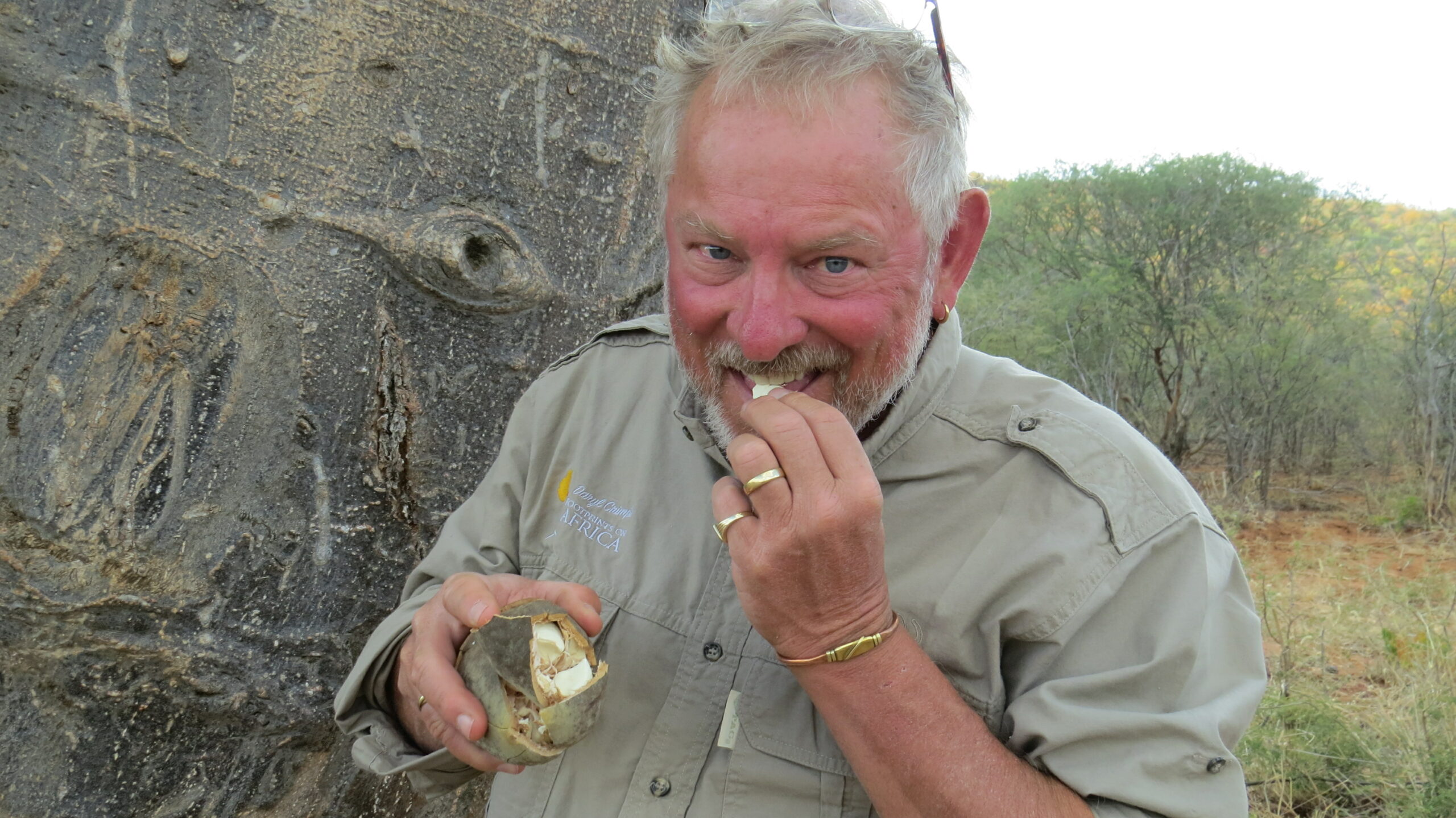 Next day, from the top of a kopje, Hennie spotted the waterbuck I wanted. Since my clients weren’t interested in this species, Daniel, Hennie, and I slipped off the rock and trotted like Bushmen out onto the veld.  The other PH, Deon, kept tabs on the bull through his binos, while Rob and Norm could watch the hunt unfold from above.

Hennie cut the spoor, slowed, and lit a cigarette. The hunt was on. Deon occasionally issued hand signals from above but they were superfluous because the ground whispered to Hennie. Here and there, using sign language, he indicated where the waterbuck had fed, walked, changed course and urinated. This is the drug of Africa, where time warps and you hunt in the shadow of your ancestors.

Hennie turned and winked at me, lifting his hand close to his face and drawing his thumb and index finger together. We were close. The air was electric. Charged with static. Then it exploded. BOOM!

We looked from one to the other, then back over our shoulders in disbelief. Hennie’s radio crackled.

“Rob’s just shot a huge waterbuck behind you,” Deon’s metallic voice punctuated the fullstop to our hunt. I was incredulous.

We backtracked to find Rob’s huge waterbuck, hoping that mine had not circled behind us and fallen to his shot. More excited radio chatter, as the others were eager for assessment of the bull.

Hennie finally looked down and muttered, “Well, it’s no Goliath.”

“More like a David,” I said, relieved my waterbuck was still running somewhere through the African twilight.

“Is it a monster?” Rob asked excitedly when they arrived.I was pondering a diplomatic reply, when darkness fell abruptly—as it does in the veld. Something coughed close by.

“What was that?” asked Rob.

“Leopard,” I replied. The bakkie was 300m away and that waterbuck suddenly looked enormous!

The following morning I was back with another set of hunters, none of whom was interested in waterbuck.  Hennie and I were hunting with Grant who had missed his dream kudu bull on the first day – big, heavy, with wide-V-shaped horns that would have stretched the tape beyond 55”. To give him credit, he was philosophical about his duff shot and proved to be a wonderful hunting companion.

Because waterbuck hadn’t made Grant’s shopping list, Hennie suggested I slip into hunting mode should the opportunity come.  Grant was happy with that.

After several exciting stalks on animals that were not really what we wanted, the waterbuck had risen through the ranks and was vying for top billing on Grant’s list. He suddenly wanted a good waterbuck. The safari bug had bitten.

Then Hennie glimpsed a good bull that he thought was the one that I had wanted, so we left Grant with Malibongwe, our tracker, beside a termite mound and snaked through the thorns.

We studied the waterbuck through the binoculars from 80m for twenty minutes, deliberating, until it lay down.

“I’ll offer it to Grant,” I finally whispered, “It’ll look magnificent on his wall.”

“Are you sure, Crimpy?  That is a massive waterbuck.”

“For sure, but I’m not motivated by the tape measure alone and that’s not my bull.”

I waved Grant in and got the nod. Using a low bush as a shield, Hennie stalked Grant closer and had him settled on the sticks 50m from the somnolent bull.  Hennie barked to get its attention.  He barked and barked and barked again. Africa does that to you – screws with your head. Things had been like fickle fireflies all week and now this bull was languid in the extreme. Then the waterbuck stood and presented the perfect shot… 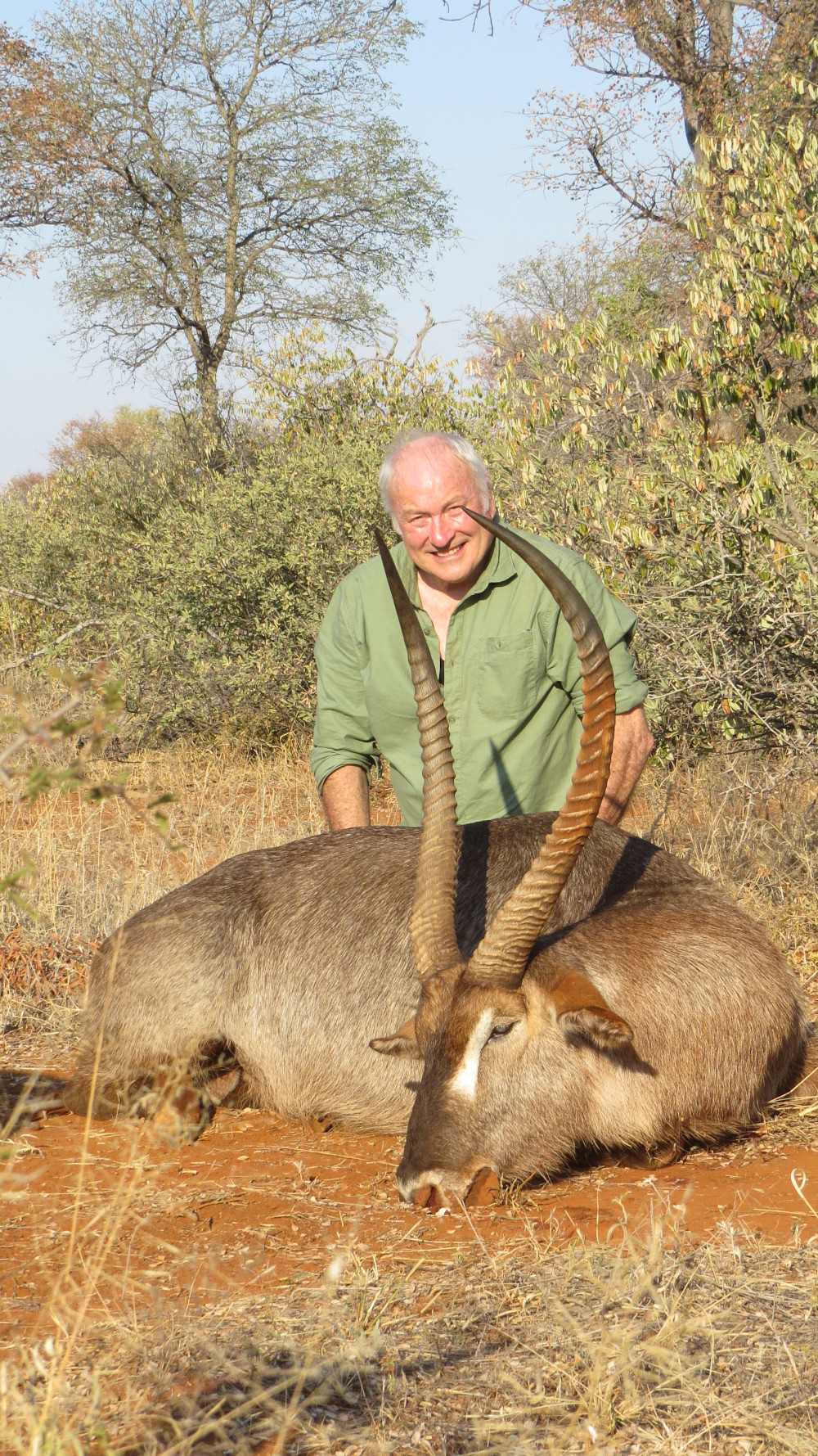 Grant with a magnificent waterbuck bull.

As Hennie’s fingers smoothed the tape measure against a deeply rippled horn, it kept climbing and climbing – 32.5” to the tip. Grant was delighted. It was almost his seventy-second birthday, a great gift, and I was very satisfied for him, but there remained a score to settle.

However, my waterbuck continued to kick my butt for another two days with tantalizing glimpses, long standoffs behind thorn thickets, and tortuous stalks before disappearing as if in a sleight of hand. I suggested, ‘drop and roll’. Hennie grinned.

That morning we drove through the bull’s territory en route to kudu country. At my nod, Hennie dropped off the bakkie, and caught my rifle as I followed. Malibongwe kept driving until he was out of sight.

Hennie and I, covered in dust, crawled into the thorns. It was a short final stalk, just 80m at the end of three challenging years. The bull was staring off into the distance, oblivious of our presence. Once satisfied the bakkie had gone, the bull leisurely recommenced feeding. Its path transected the only shooting alley I had, a narrow gap in the thorns. Hennie timed it perfectly, giving a throaty cough that pulled the bull up dead center in open ground. It lifted its head, turned, and took one last look at the world…

I ran my hands over the beautiful, bell-shaped, heavy horns and reflected on a magnificent hunt. In the tradition of the San Bushmen, I plucked a tuft of hair from the tail and cast it to the wind to show respect to the animal and help it into the next realm.

The spirit of the waterbuck vanished like an ace in a slick card trick.

A shiver ran down my spine. 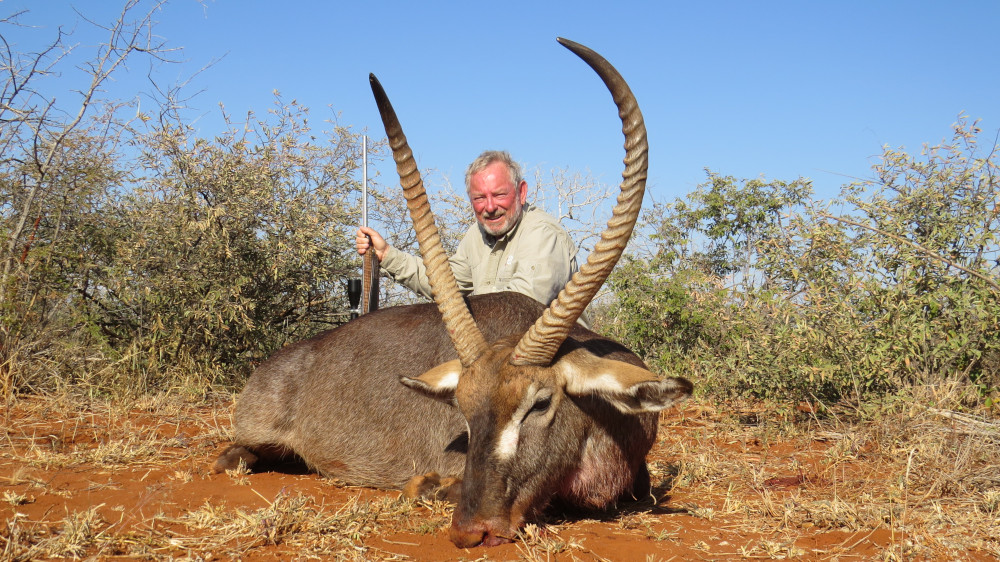 Crimpy had to mix it up to finally get the drop on this waterbuck. 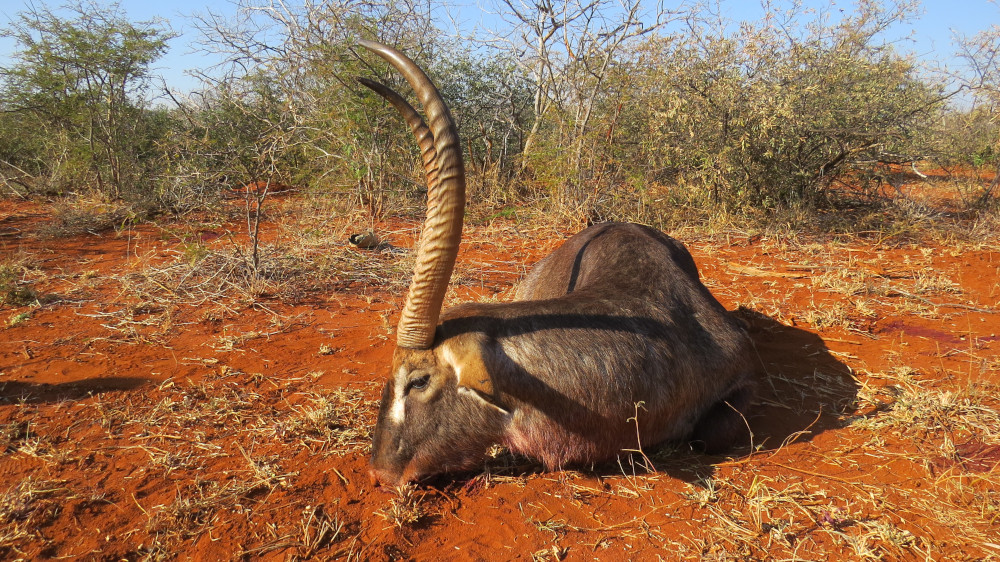 Crimpy’s waterbuck; note the heavy base and deep curl.

Raised on a farm in the South Island New Zealand, Daryl has hunted since before he could remember: rabbits, then pigs, deer, wallaby and alpine tahr and chamois. From the age of 10, he had a dream to hunt Africa, to leave his footsteps on the Dark Continent. He now runs a business hosting hunters on safari in Africa – Daryl Crimp’s FOOTSTEPS ON AFRICA