A Vintage Flight for Doves 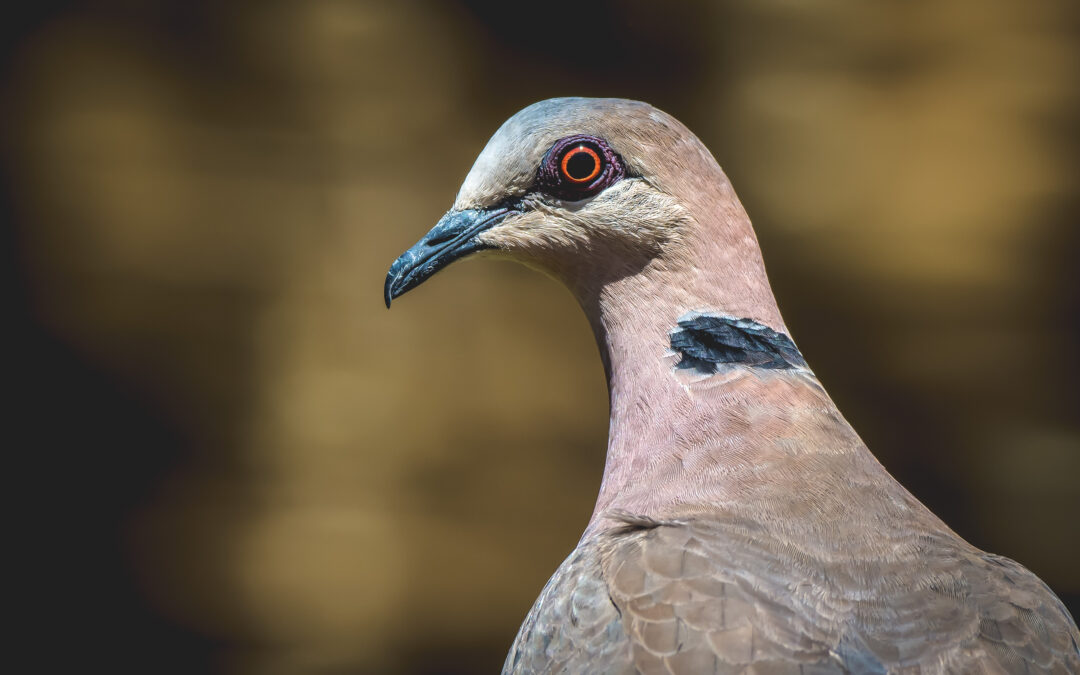 South Africa is a sportsman’s dream: not only is it bursting with some of the most exciting hunting in the world, but when flying from Europe, there’s no jetlag. Less well-known are the fantastic opportunities for wingshooting, notably red-eyed doves and rock pigeon which are native to South Africa. These birds prey on crops, and the damage done to precious yields of soya and grains can be devastating. In May I headed out there with Marc Newton, MD of John Rigby & Co., to help protect soya crops.

Flights are short between cities and towns and the birds’ feeding grounds, and we were able to base ourselves just 45 minutes’ drive away from the airport at Pretoria, in the luxurious Ingaadi Spa. The plan was to join Andrew Tonkin, an authorised Rigby dealer in South Africa, who specialises in high-end shotguns and rifles, and has a tremendous stock of historic and antique guns, including some made by Rigby. Johan van Wyk, a writer and gun aficionado, would also be joining the team of shooters for two evening flights. 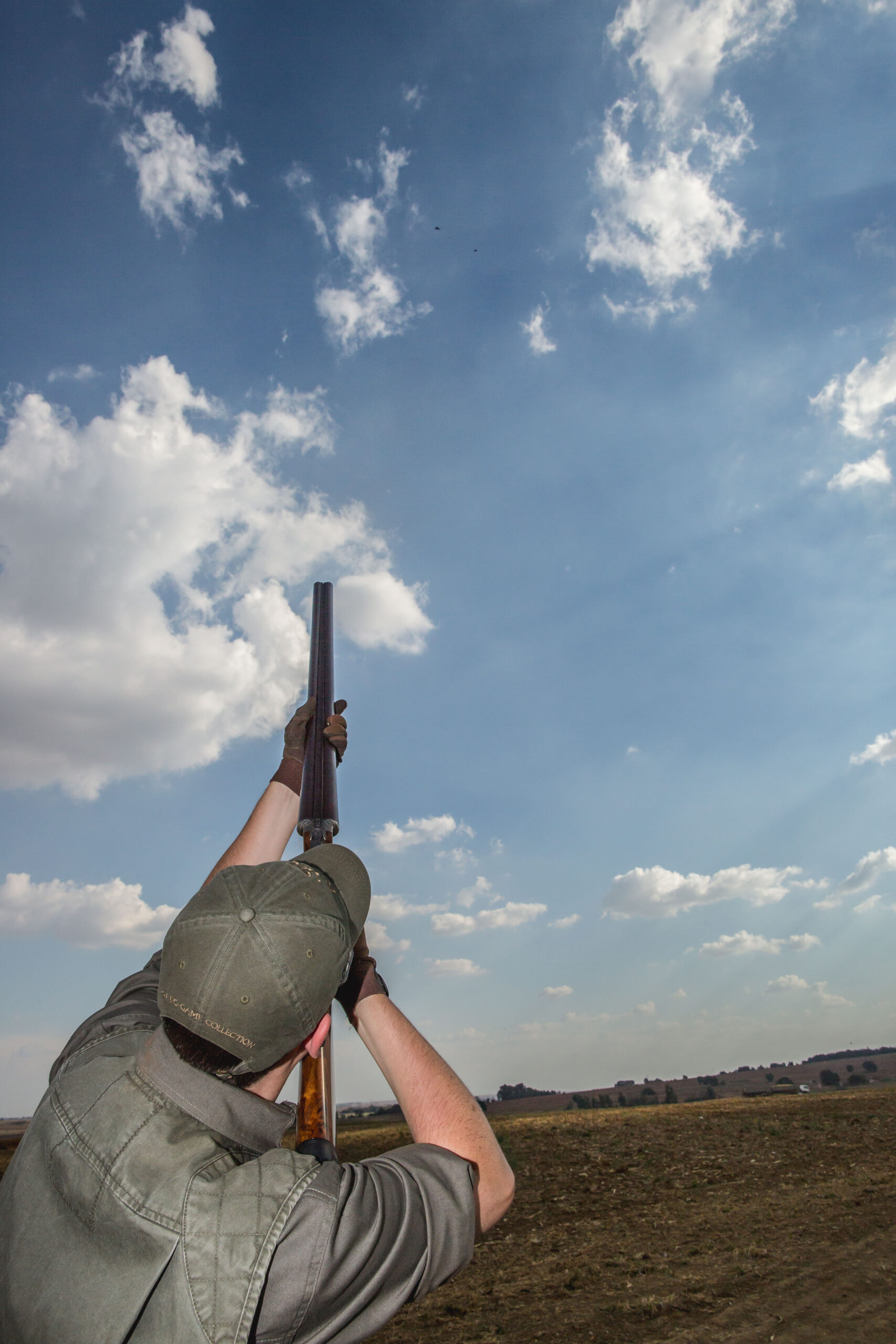 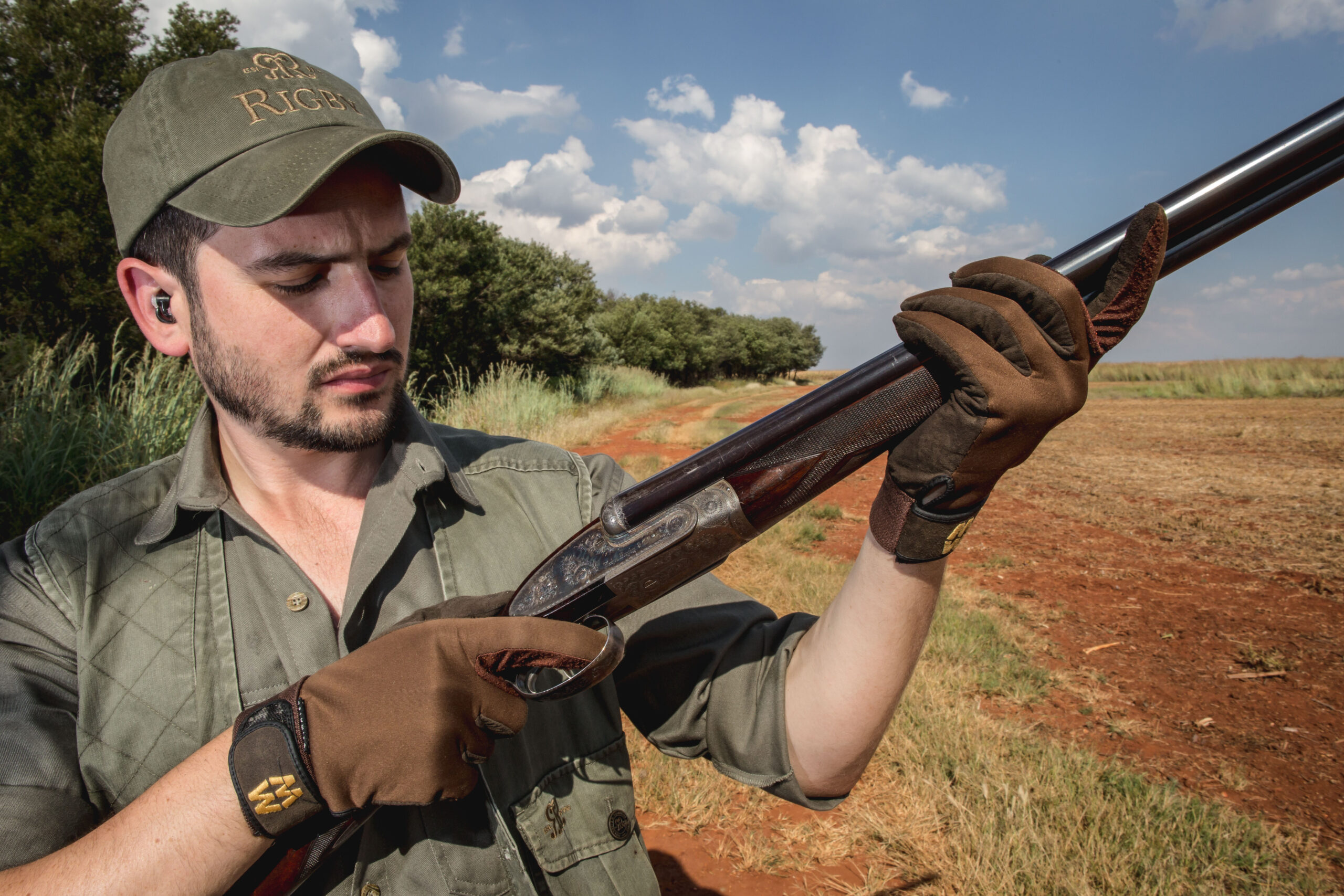 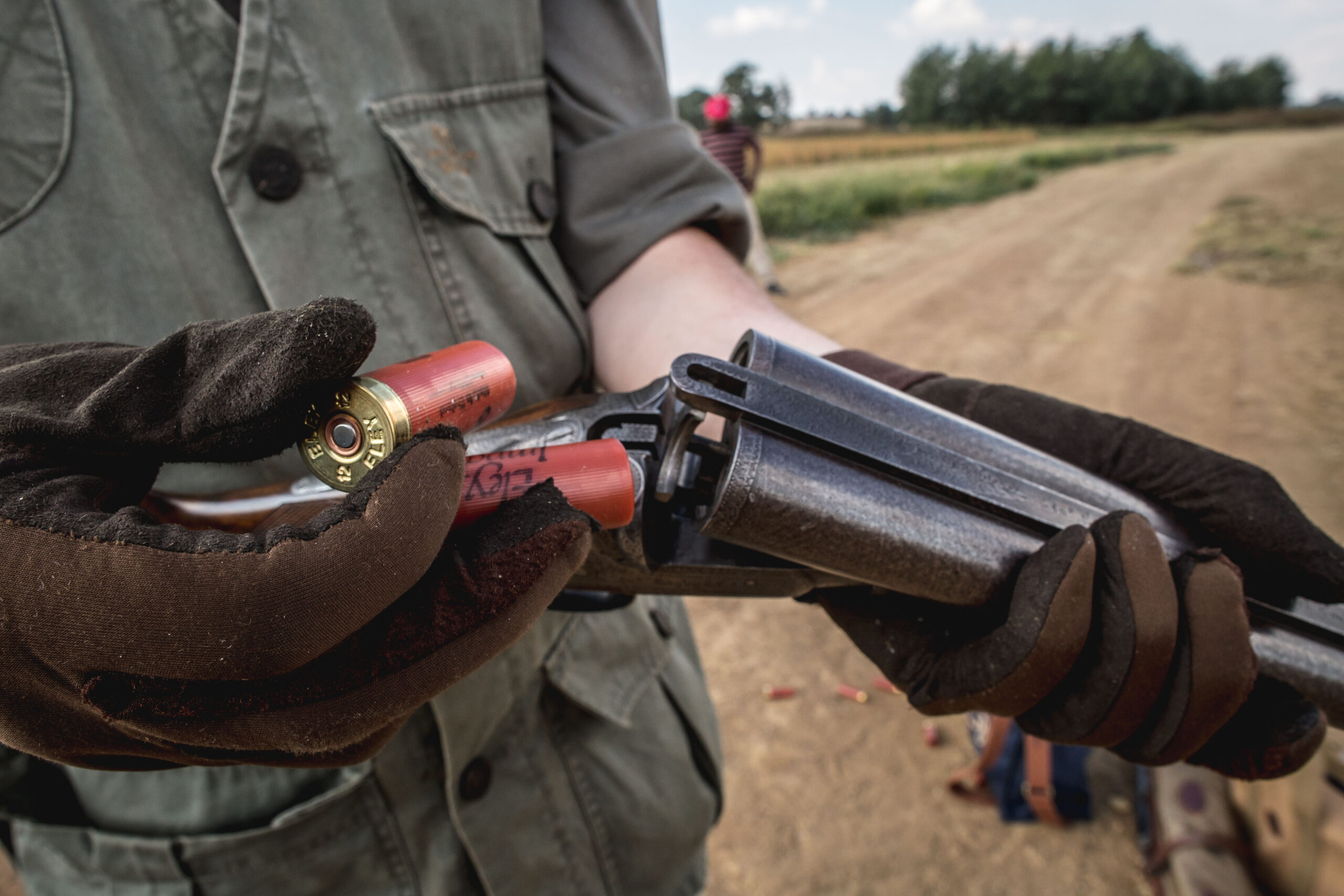 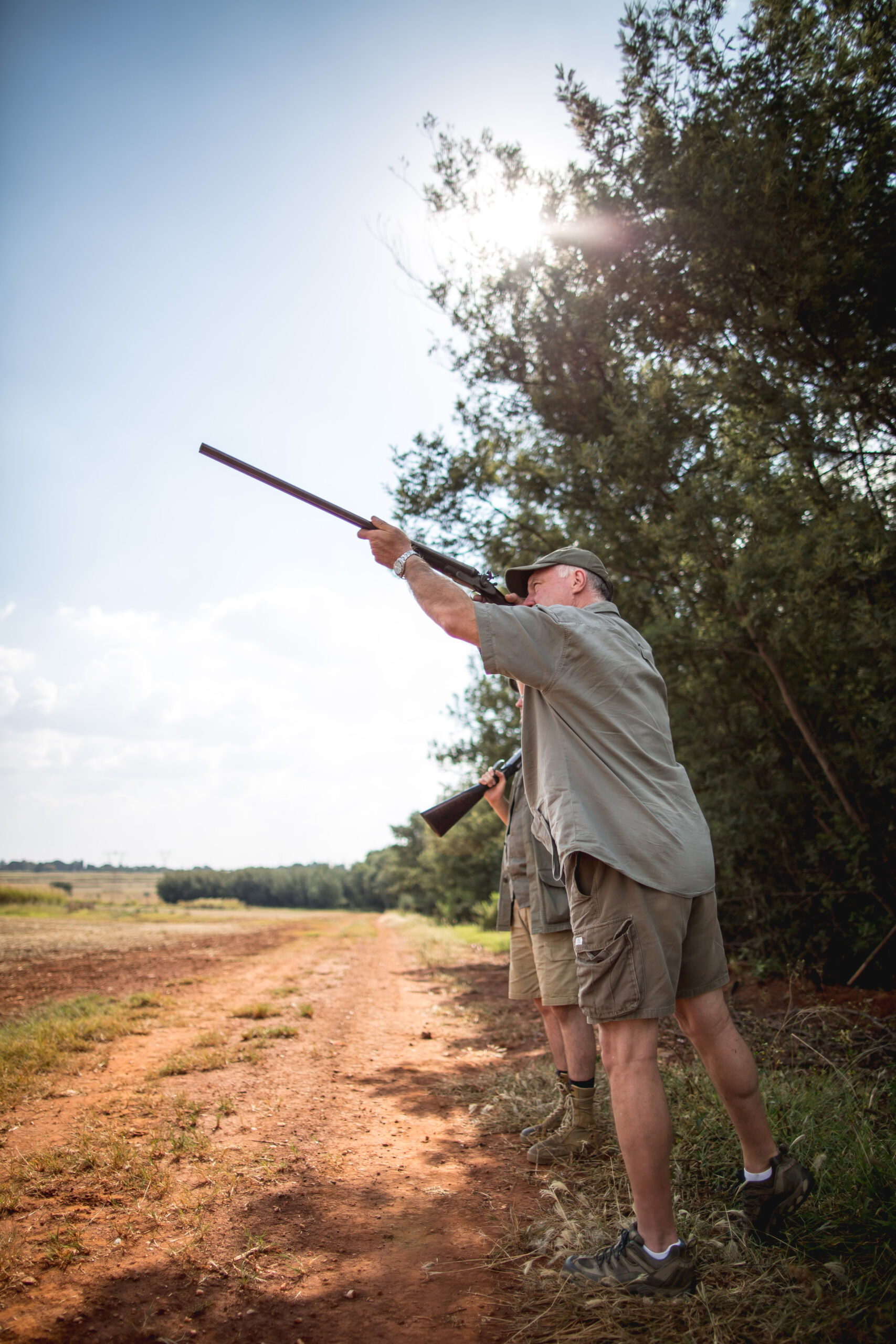 Johan talked us through the process: “We’re going after red-eyed dove and rock pigeon, just outside Pretoria East, about 10km outside town. These birds aren’t migratory in the true sense, but they live in the city, and fly out to feed. This gives us the chance to flight them as they head in and out of their feeding grounds – this is crop protection and harvesting wild meat. All the birds shot are collected and the meat will be distributed among the staff at Ingaadi Spa, where you are staying, so nothing goes to waste.”

It’s normal to shoot these crop-raiders on flightlines, according to Johan: “We don’t need to decoy, and mostly you’ll be shooting high incoming birds. If there are a lot of them, they keep coming in until it is dark. We’re right at the beginning of the season now, which runs from May to September. As the season goes on, the shooting gets better. There’s a 30-bird limit for the rock pigeon, but there’s no limit on the red-eyed doves.”

As we drove to the area we’d be shooting over, which held soya crops, Johan explained: “When you are going for pigeon, you need to select your venue according to crops. You also need to consider that the birds like to fly into the wind, so that will determine where you set up, too.” Judging by the numbers of birds lifting from the field as we approached, this was going to be an extraordinary flight for pigeon. There were thousands of them!

The red-eyed dove, Streptopelia semitorquata, is a pigeon indigenous to Africa south of the Sahara. The red-eyed dove is around 12in in length, stocky, and has a pale brown back, wings and tail, with blackish flight feathers, while the head and underparts are dark pink to pale grey around the face. A black patch edged with white appears on the back of the neck. The name comes from a bare patch of skin around the eyes, which is red. The bird’s main diet is seeds, grains and other vegetation. The breeding season is all year round, though there is a clear spring/summer peak in some areas. Females lay two eggs, which are incubated by both parents for between 14 and 17 days before hatching. The chicks stay in the nest a further 15 to 20 days before fledging. The population is healthy, and the bird is listed as a species of least concern. Numbers have increased considerably, and the red-eyed dove has expanded its range since the early 20th century thanks to the planting of trees and digging of watering points. 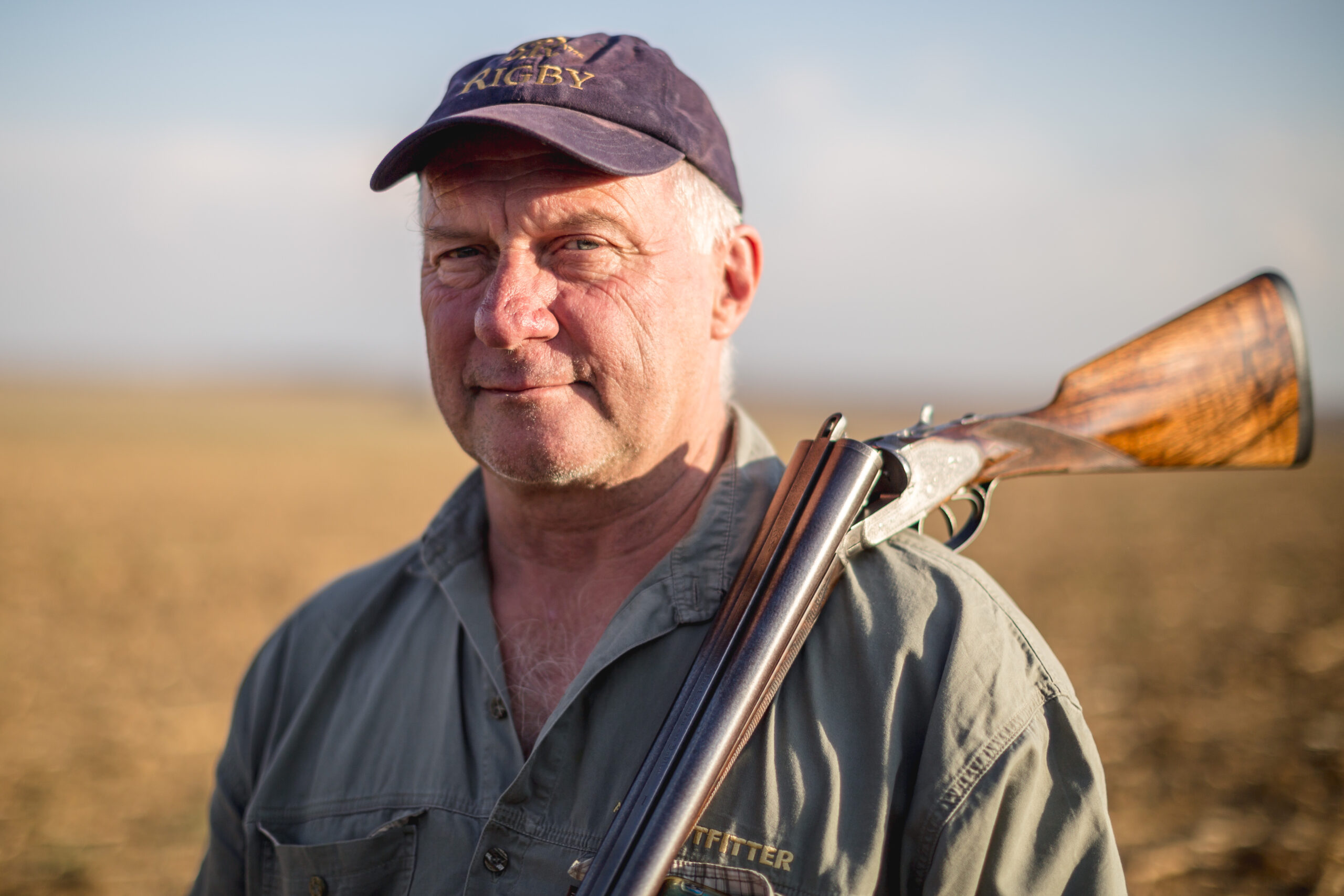 Andrew Tonkin, whose collection and knowledge of historic guns is impressive, had brought guns for Marc to use. These weren’t just any old guns, either – these were shotguns made by John Rigby & Co. “We’ve got a Rising Bite, probably made just after the patent was taken out, so that was built in the 1880s. Then we’ve got a sidelock ejector from the 1930s and a top-lever hammergun with barlocks from 1877, which is a very uncommon Rigby to find.” Not a bad spread of guns, and all in 12-bore. Andrew shoots vintage guns every week: “Because I’m a collector, it just wouldn’t feel right to use a modern gun over-and-under. My group of shooting friends calls itself the ‘Practical Eccentrics’. It’s very seldom that we shoot any guns that are less than 100 years old.”

We were likely to be shooting a heavy volume of cartridges, but Andrew knew this wasn’t a problem: “We stick to the loads the guns were built for, rather than using heavier modern loads. We use the smokeless equivalent of 3g or ⅛oz load, which equates to 550 bar of pressure. If you use that, your old shotguns will last forever. Our pigeon here in South Africa are smaller than the UK woodpigeon, so in terms of cartridges, we use 30 or 32g of number 7 or even 7.5 shot, which gives you 1,250ft/lb. We also sometimes shoot red-breasted doves, which are even smaller, so for those we use 21g of 9s. That load is really easy on the shoulder, and when we have the WAGs (wives and girlfriends) along, they like it because there’s no recoil.”

Using a historic gun is always a treat, and particularly so when it is a Rigby and the pigeon are flying fast and hard. We picked our birds, choosing to shoot sporting ones rather than volumes of easy targets. It’s pretty rare to be able shoot 250 cartridges an hour on any birds, but when the red-eyed doves are really flying, you’d certainly be able to do that. With so much shooting, the evening passed all too quickly. 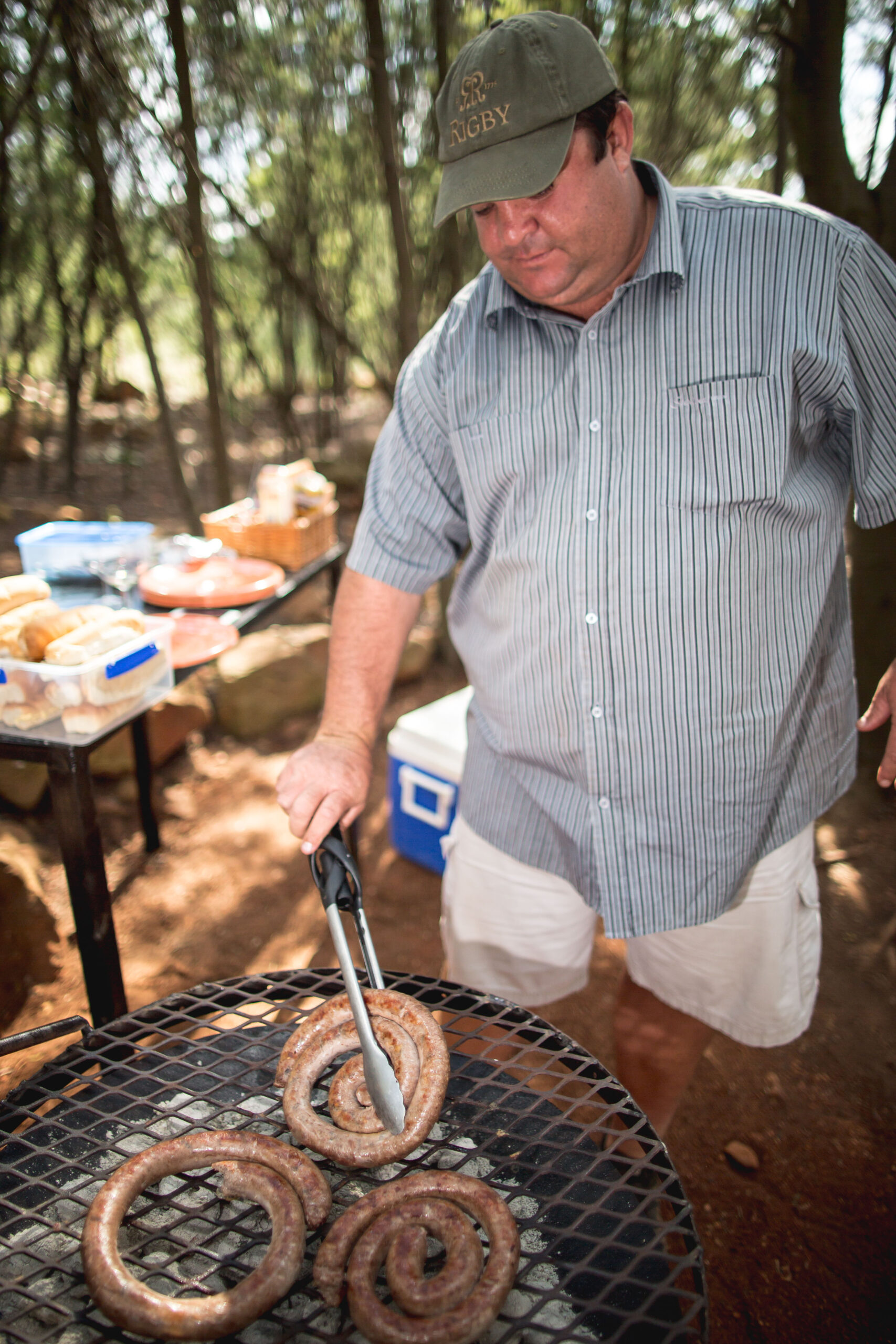 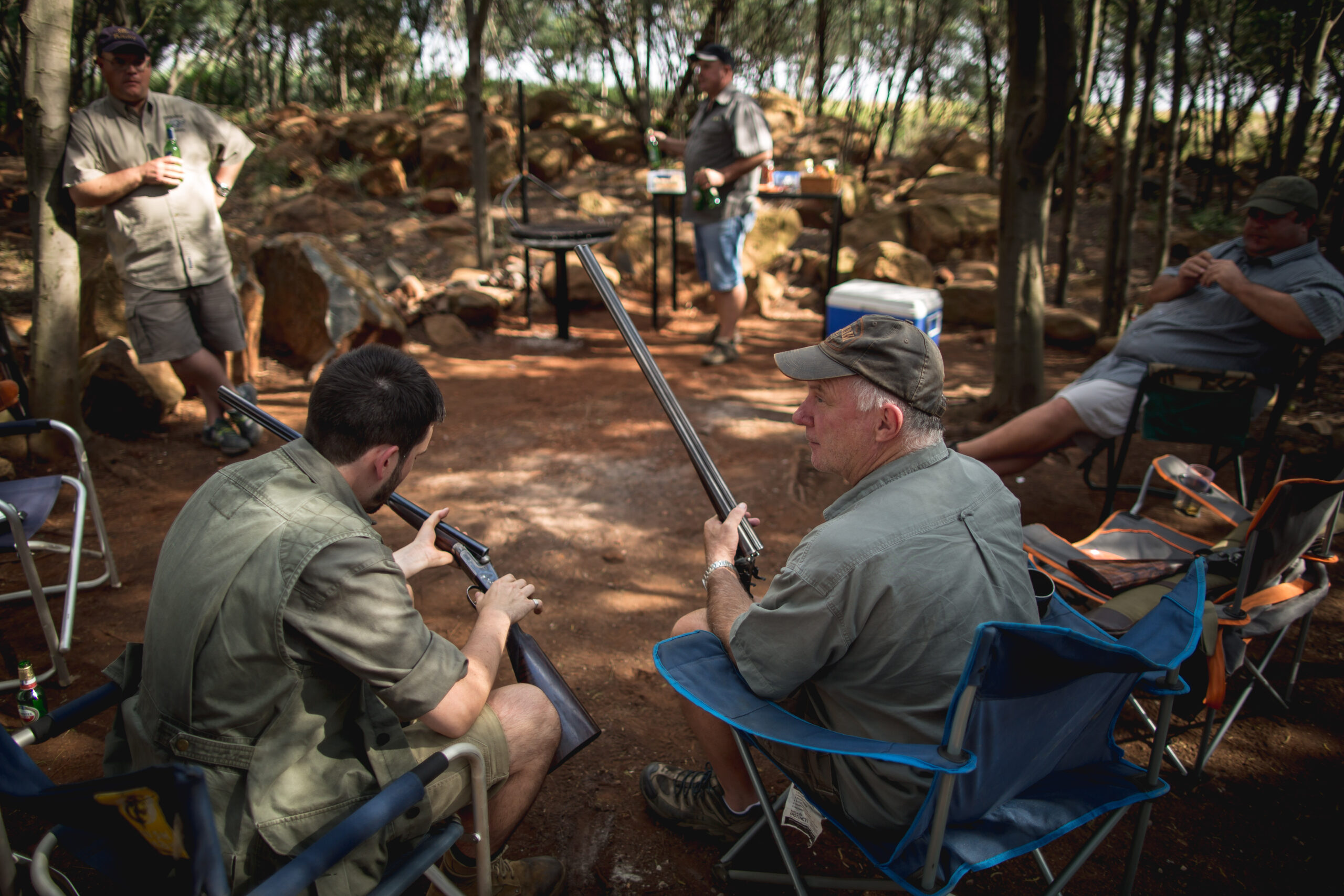 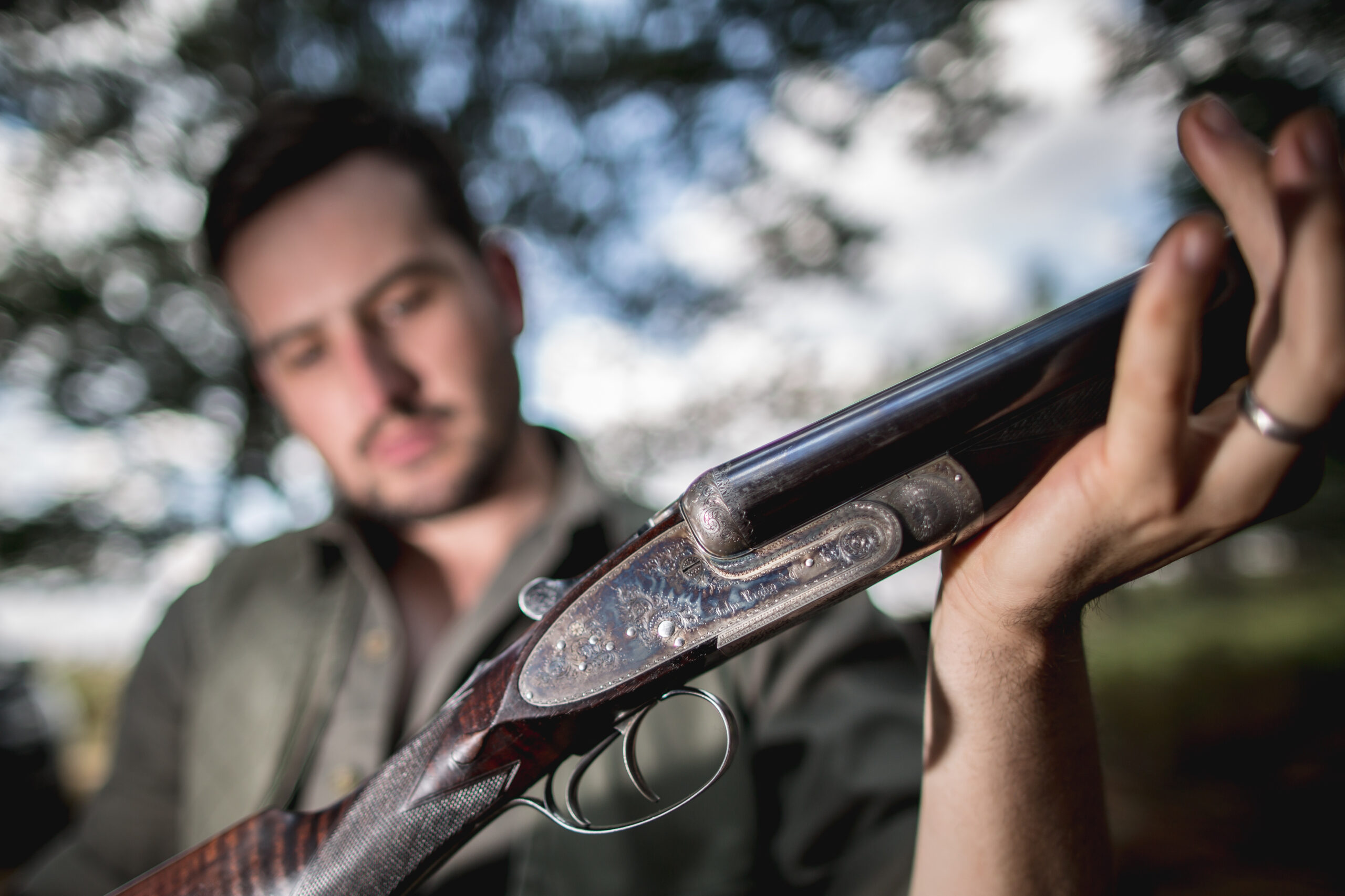 The following day, we enjoyed a braai before the action, admiring Andrew’s stock and talking vintage guns as we ate. Andrew’s encyclopaedic knowledge of the history of firearms was fantastic, and his enthusiasm was catching. As he explained, shotguns haven’t changed all that much since the guns we were using were built: “As far as guns go, a vintage shotgun is the one that is closest to its modern counterpart. Rifles have improved a lot, handguns have improved a lot, but shotguns not really. If you could shoot a gun well in 1900, the same gun will serve you well in 2000. You can’t say the same for rifles or handguns or any other firearms.”

The second evening passed in the same flurry of action as the first, and again we were able to pick and choose the most challenging birds, with the Rigby shotguns performing just as well as the modern guns being used by other members of the party. Marc was impressed and delighted: “It was very good and very interesting. We had some seriously high-volume shooting, and it pays credit to the craftsmen of yesteryear that the guns they made up to 120 years ago are still fit to do the job they were made for. They worked just as well as the new guns that other people were shooting.” It’s interesting to think what those old guns have been used for by previous owners. We’re really just custodians of guns like these, and Andrew Tonkin is a fantastic representative of Rigby’s past, present and future.” 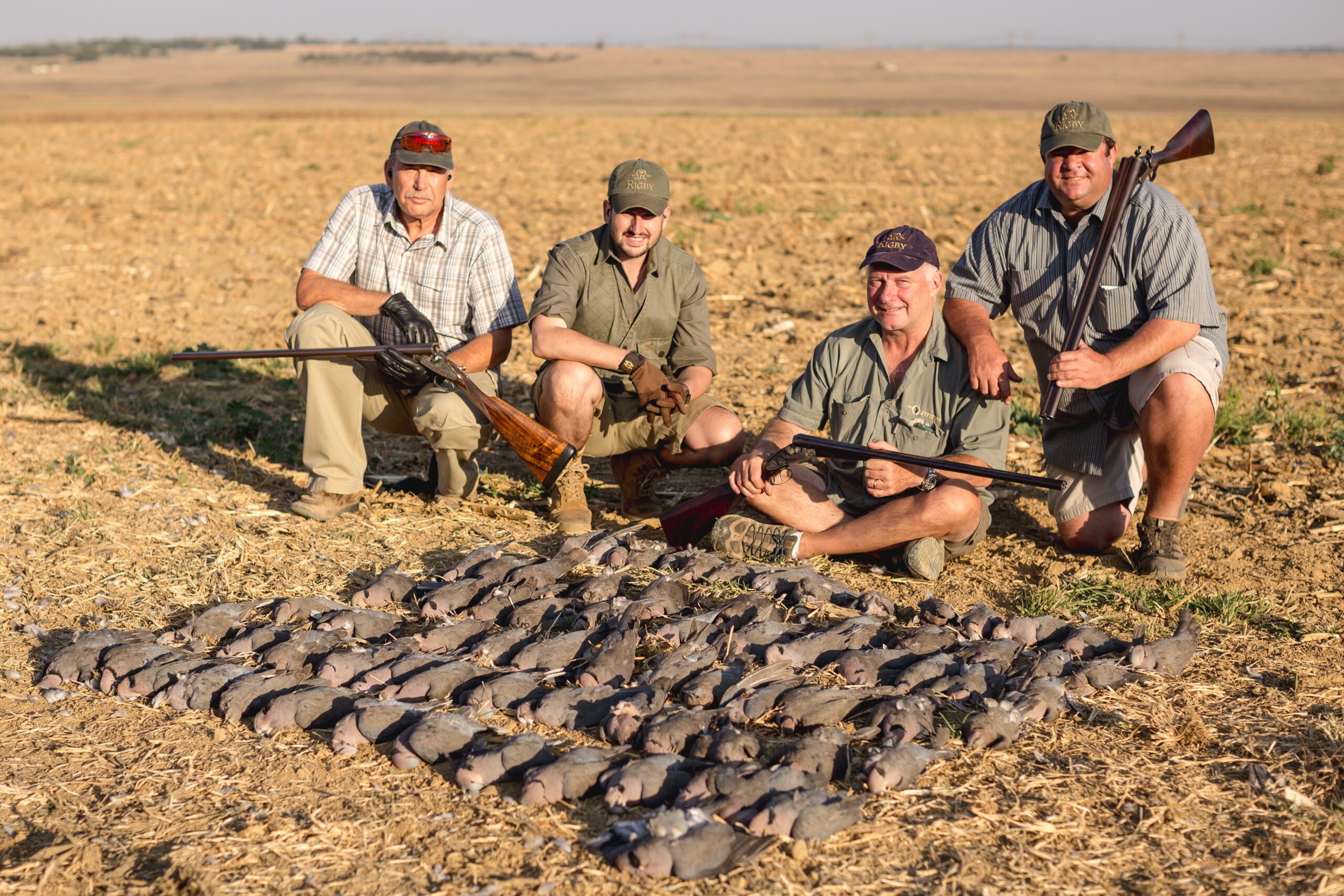 How to go dove shooting in South Africa

George Digweed has shot red-eyed doves with Andrew in South Africa, and said it was better than the shooting he’d had in Argentina. It’s also closer and there’s no jetlag. There are a few outfitters who can accommodate red-eyed dove shooting. Your outfitter should be able to organise all the paperwork for you to bring your shotguns into South Africa, as well as any permits or licences required.