“No, it’s not the Congo – it’s just a bit further north… no, rebel militia doesn’t jump out from behind every bush… yes, hunting is open there.”

I find that the questions I am often asked about the Central African Republic are, in fact, an accurate assumption of the times in this part of the Dark Continent.

In hunting and safari circles in the not-so-distant past, the CAR was a well-known destination with many safari outfitters in operation. It had a reputation for producing quality trophies, still evident in today’s SCI Record Book. Sadly, a combination of political instability, mismanagement, and bad press have made it a far less common hunting ground for the avid safari-goer than it once was. On the ground today, however, the reality is quite different from the media portrayal.

In 2012, a military coup-d’état concentrated on the capital, Bangui, led to somewhat of a ‘free-for-all’ for various groups of rebel militia looking for an opportunity to loot and gain power. So much pressure on Bangui, the only real access point to the rest of the country, made operating any business virtually impossible during this brief period. As such, the safari operators couldn’t reach their camps, and many of them lost complete control over their concessions – where looting was rife, and wildlife suffered.

As we know from history in Africa and abroad, when sustainable hunting activities cease to exist, the value of wildlife and the land on which it lives decrease proportionately. There is no income, so anti-poaching programs disappear, the animals are slaughtered en masse, communities suffer, natural habitat is squandered, and the list goes on. As a result, most of the safari outfits in the CAR folded. After this brief period however, the MINUSCA peacekeeping force of the United Nations stepped in and rapidly restored stability to Bangui, and they are now highly effective in most towns across the country. 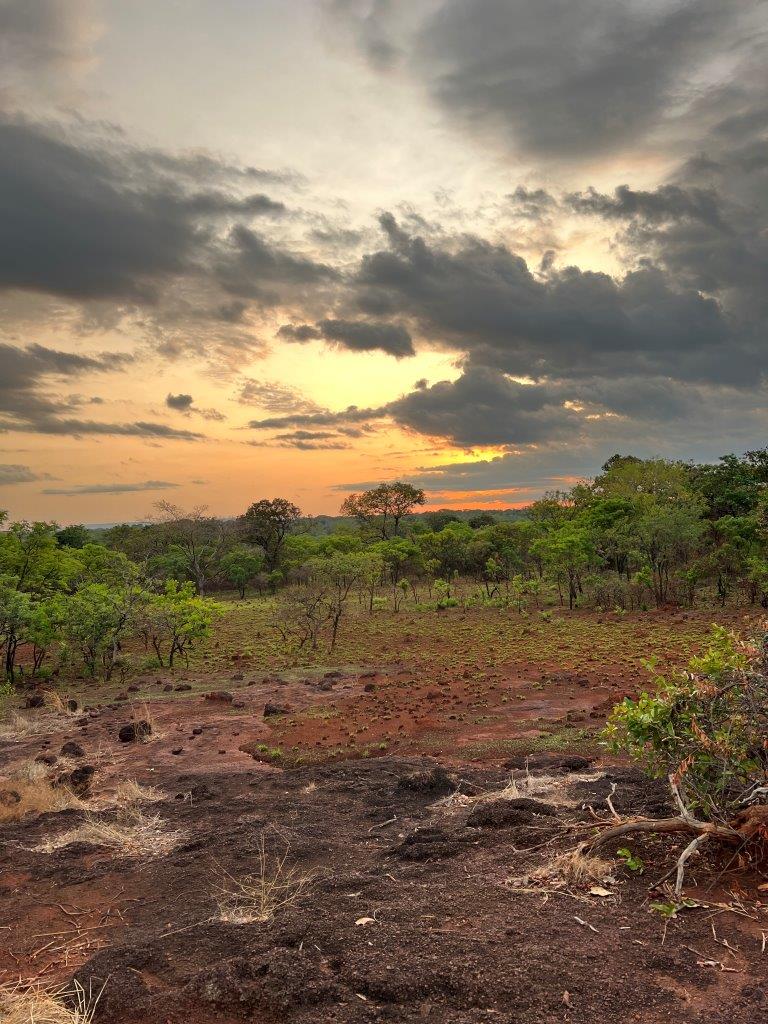 Today in Bangui you can safely enjoy a cold beer and a first-class meal amongst people of many different nationalities at several good restaurants, including the Relais des Chasses – the traditional meeting place for hunters before and after their safaris. There are comfortable accommodations available for hunters too and, in general, you can expect the same experience as they would in any other African city, despite what the press wants the public to believe.

Fast-forward ten years and, outside of the capital, there is a glowing beacon of light that remains in an otherwise sad story. A two-and-a-half-hour charter flight due east of Bangui, over a seemingly never-ending sea of green, takes you to one of the last two operational hunting concessions in the country run by the renowned French outfitter Alain Lefol and his son Kewin. This area experienced far less trouble than in the northern parts of the country many miles away, where most of the other safari companies had their hunting areas.

The 2.4-million-acre (one-million-hectare) zone is bordered

on either side by the Vovodo and Chinko Rivers, which drain into the Mbomou and Ubangui Rivers respectively, before eventually joining the mighty Congo River further south. Henry Morton Stanley considered this area to be the ‘northern-most extension of the Congo River Basin’ – too remote to even fall under the vast governance of the Belgian King Leopold II, or the French, in the great scramble for Africa in the late 1800s.

Alain, who has been hunting in the CAR since 1978, arrived in the never-before hunted area for the first time in 2009, and the Lefols have been operating there ever since. Like the other safari outfitters in 2012, they were unable to access the zone for a brief period and as such, it was hit hard by poaching. By 2014, however, they had reconsolidated the area and were on safari once again, never having any issues with regard to security.

In 2015, African Parks founded the Chinko Project on the western border of the concession, bringing the total area under protection to roughly 13 million acres (5.5 million hectares), which is double the size of Hawaii. The area is totally isolated, inaccessible by road, and there is no economic interest in resources like diamonds or gold, hence it is devoid of villages, state roads, bicycles, and people in general. Together, the Lefols and Chinko have been working hard on anti-poaching programs, which are now paying dividends, with animal populations increasing steadily. You would be hard-pressed to find a wilderness area anywhere in the world which compares in terms of size and undisturbed by human presence. It is quite a humbling sensation to know that no European has ever set foot in much of the concession and that places as wild as this still exist in these modern times. 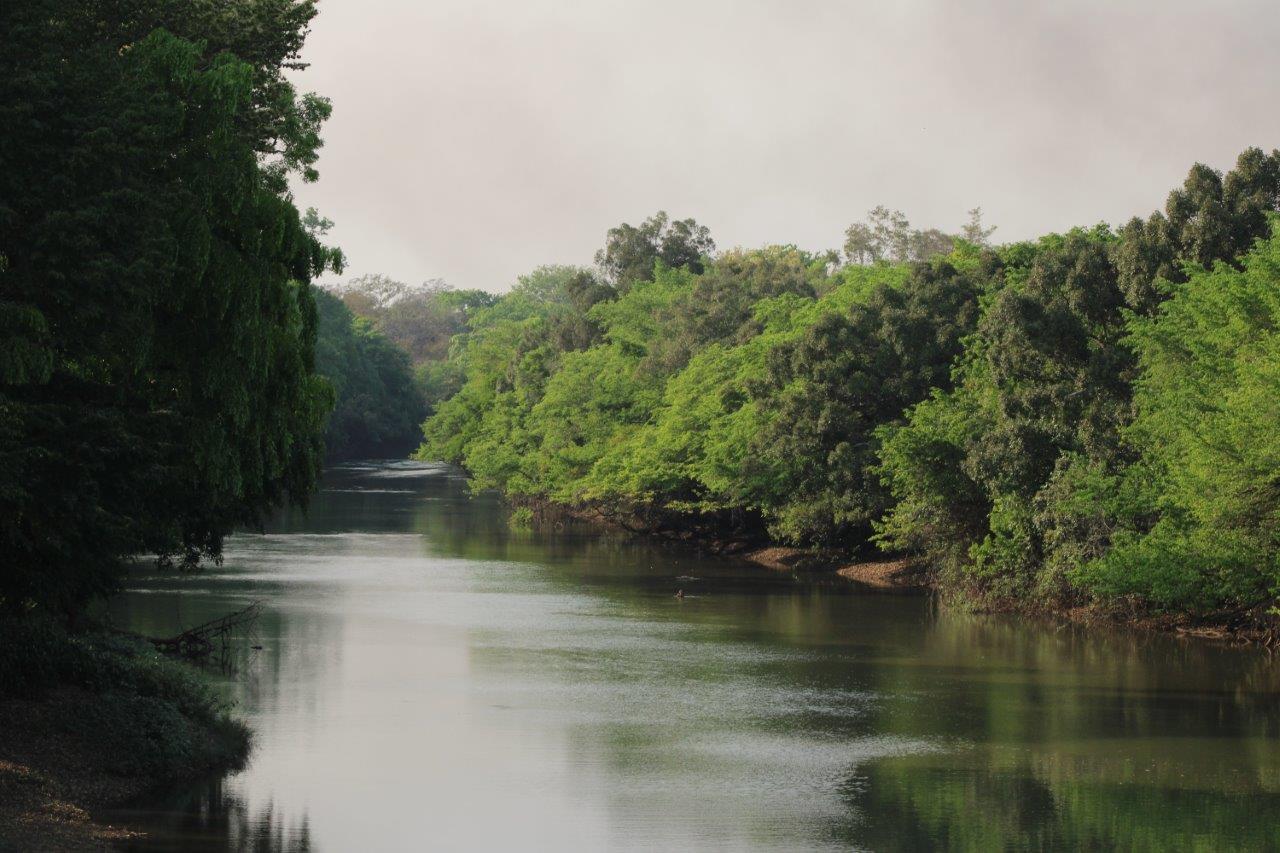 Right: Kewin Lefol and Author returning from a successful fishing trip at dusk 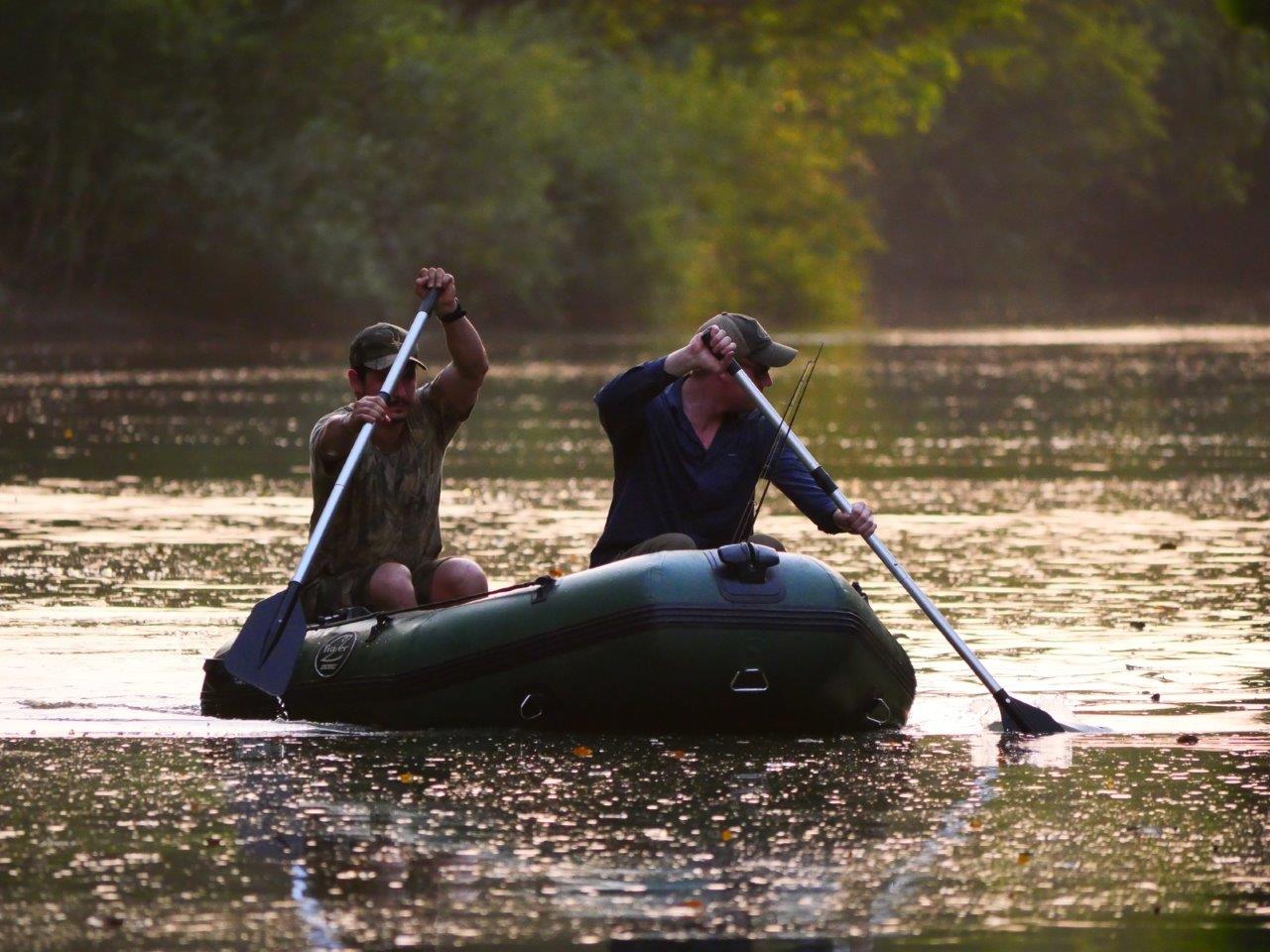 The landscape here is gallery forest; savanna woodland fragmented by tropical forest patches – colloquially known as ‘baco’. Somewhat of a transition zone between the Congo Rainforest in the south and the Sahelian savanna in the north, the area is of great interest to the biologist and sportsman alike, thanks to the sheer diversity of flora and fauna, with both savanna and forest species occurring here.

There are two seasons in equatorial Africa: the dry season, which runs between November and March, and the wet season between April and October. In fact, the seasons are so extreme that at the peak of the dry season, dust from the Sahara Desert blows southward through the zone, carried on the Harmattan winds, and late in the rainy season huge tropical thunderstorms move eastward from Equatorial Guinea and Gabon on the west coast. As much of an expedition as it is a hunt, the nature of the landscape and enormity of the area make hunting tough. Patience and perseverance are required, but rewards can be great – with a unique experience and quality animals the result of a truly wild hunt.

Hunting is done primarily through tracking with skilled Zande or Baka Pygmy trackers, or by waiting in machans (tree-stands) high up in the forest canopy over salines. A ‘saline’ is a kind of natural salt lick; a place where minerals are concentrated in rock or soil, attracting animals to replenish mineral reserves otherwise lacking in their diet. Many of these were carved out by elephants that once roamed the area in great numbers in times gone past, known in this part of Africa, particularly for their long, golden ivory. The salines which remain are now the only legacy left behind by these giant pachyderms. 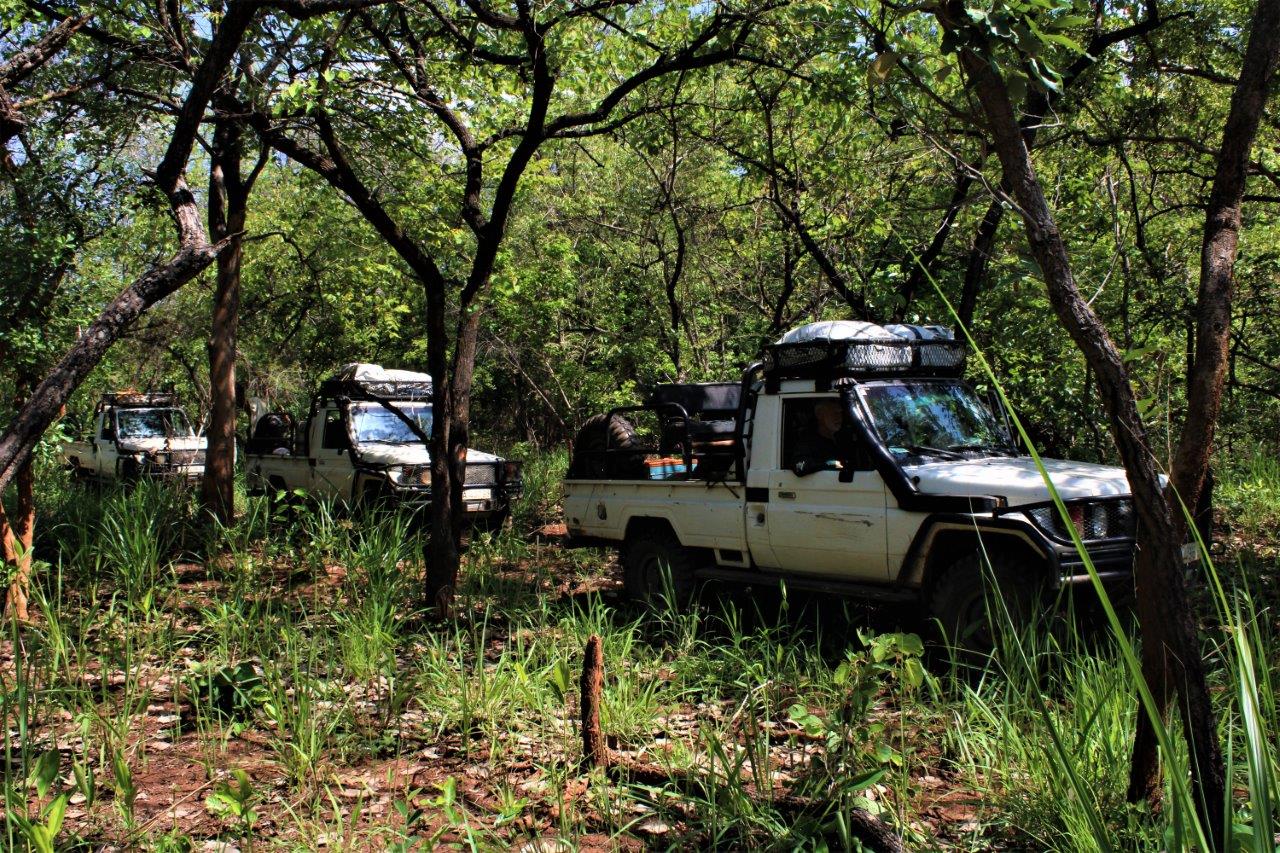 Land Cruisers packed and en route to a fly camp

The area is most revered for its Bongo, with bulls over 32 inches and weighing 680 pounds not uncommon. The Bongo found in the gallery forest are generally larger than Bongo found in true forest, mainly because they have access to a more nutritious and varied diet offered to them by the savanna vegetation, in which they spend a lot of their time. Anyone who has hunted Bongo can attest to their cunning nature, mysteriously appearing and disappearing at will in habitat to which they are perfectly adapted. Every time you are gifted the rare opportunity to observe these enigmatic creatures – even if only for a few seconds – it is as if you are in the presence of royalty. It is quite uncanny to see animals of this size disappearing into seemingly impenetrable brush at full speed, with the surefootedness of a cat, and the grace of a Queen. 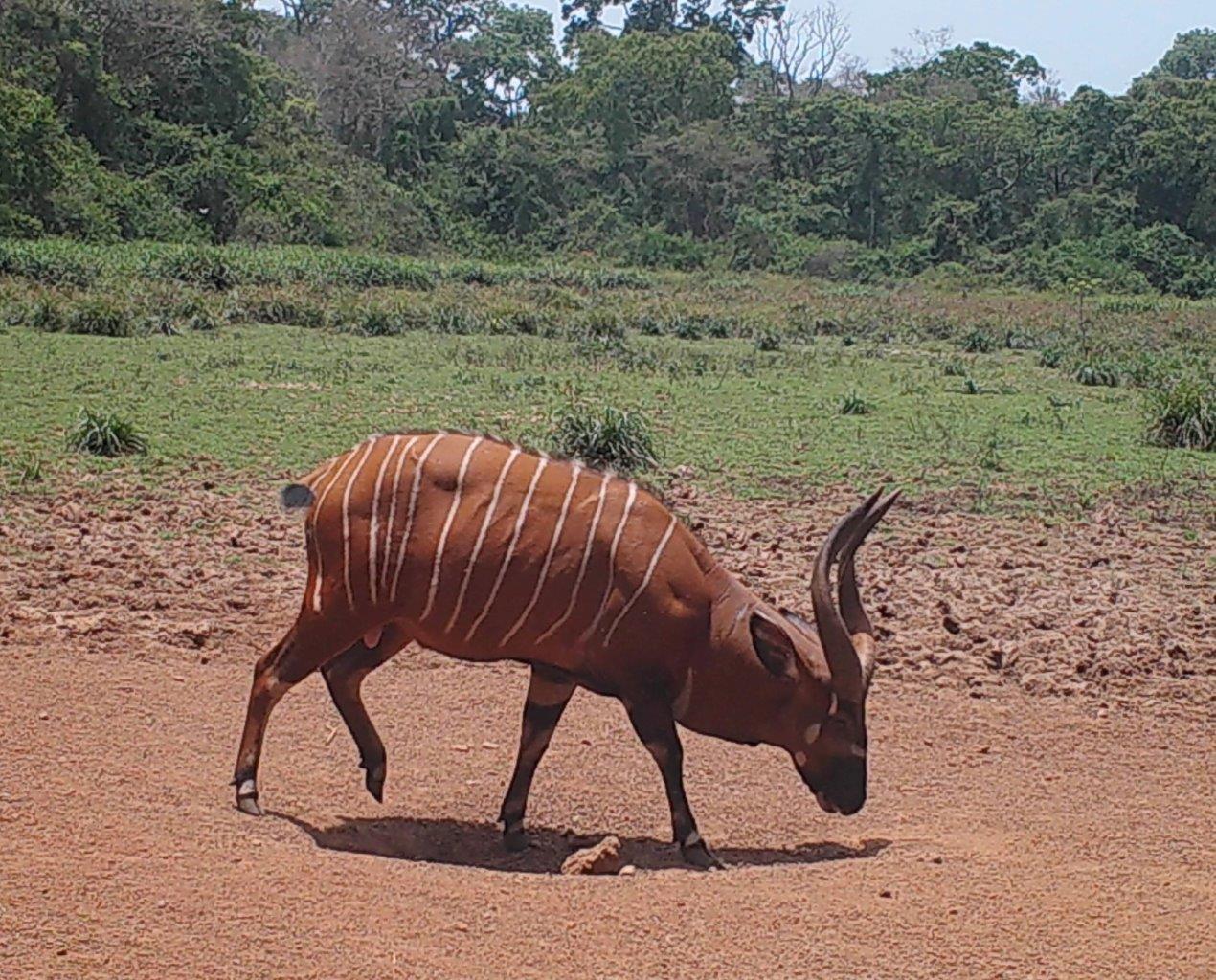 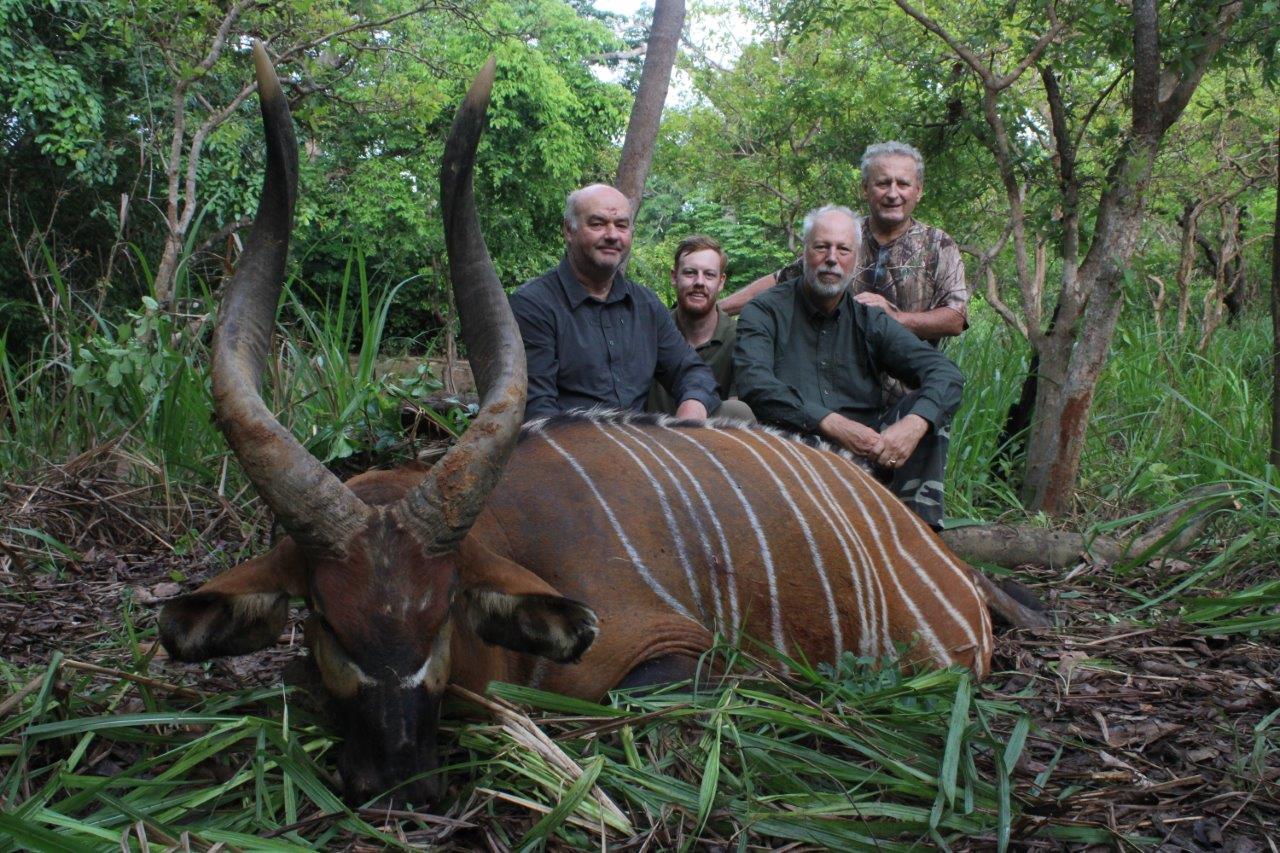 The talismanic Giant Forest Hog, which are quite numerous in the area, is another prized animal from the east of the CAR. The biggest Hog hunted in the Vovodo concession thus far weighed an enormous 700 pounds and was taken by an 80-year-old bowhunter.

The Central African Savanna Buffalo found there are quite an anomaly. They are considered a ‘transition’ buffalo between the forest and savanna, coming in different shades of red and black with most bulls carrying forest-type horns. Although weighing in at 1,400 pounds, they are much bigger than the true dwarf buffalo of the big forest. 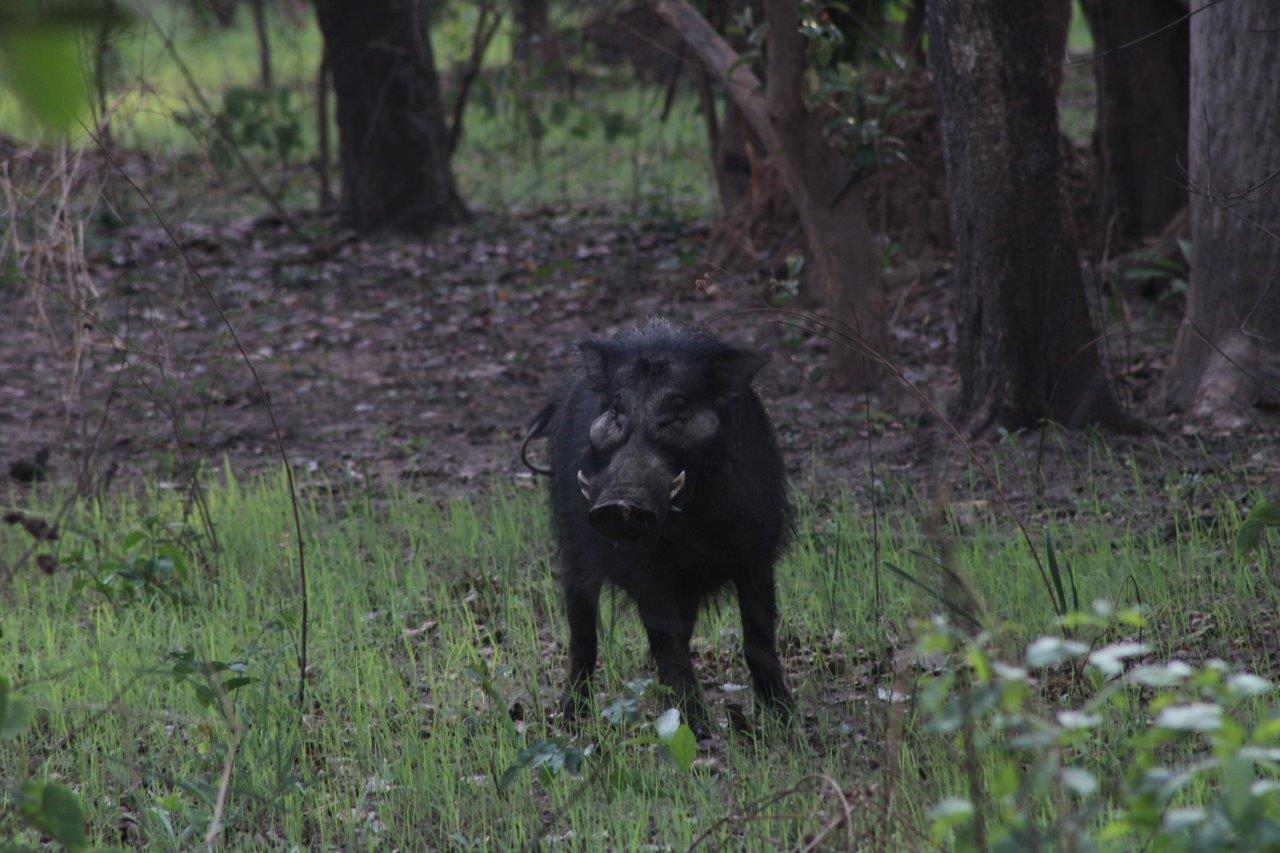 Young GFH boar proudly showing off his large nasal discs, a distinctive characteristic of the species, which are considered the largest wild member of the pig family 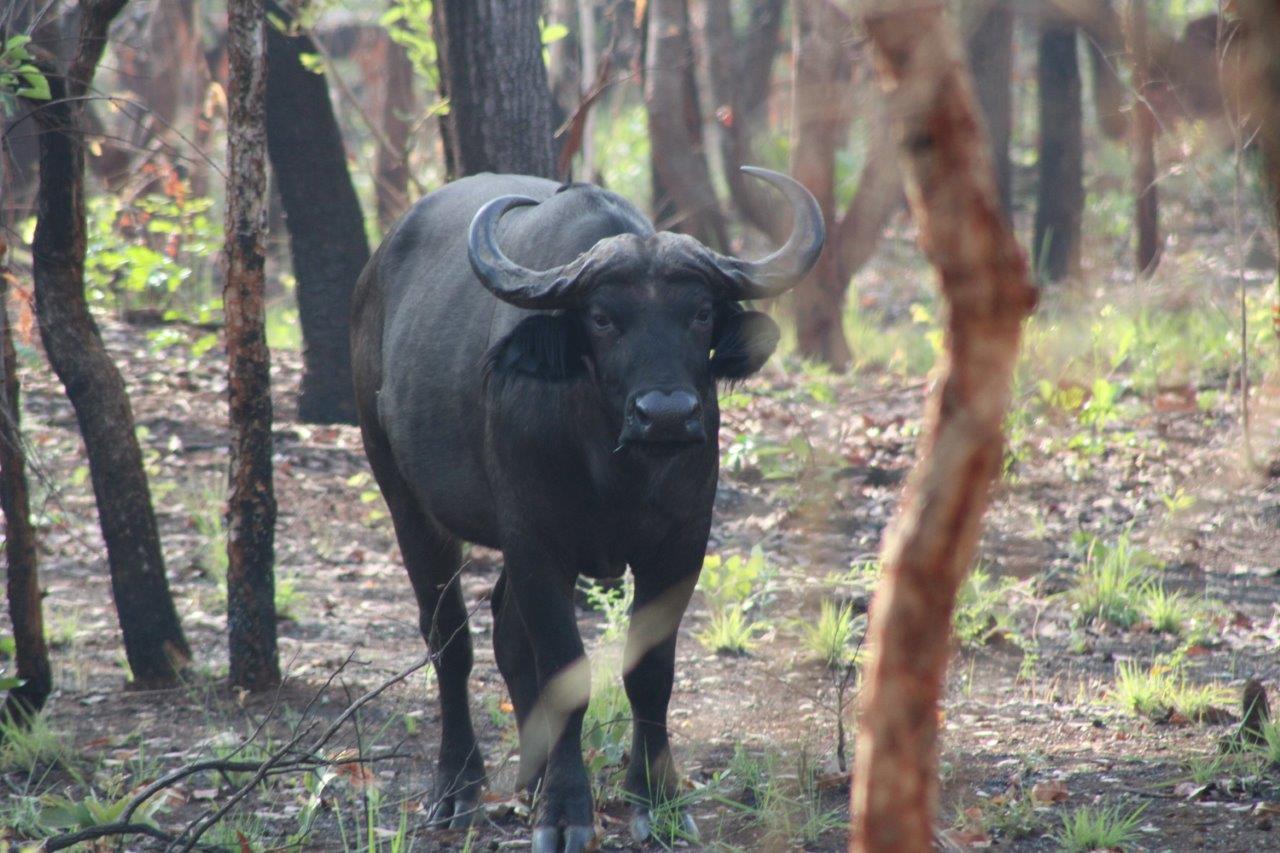 Other huntable game in the area are lion and leopard, a variety of bigger antelope including the highly sought-after Lord Derby Eland, Red River Hog, warthog, and five species of duiker. In the Vovodo River, Tigerfish (occasionally the Goliath Tiger) and Nile Perch provide fantastic sport fishing.

Hunting in the CAR will test even the most experienced hunter and traveler. If you want to be pampered in a 5-star lodge, you won’t have a good time here. It is a place that heightens the senses, where you can truly live in the moment and forget about the rigors of everyday life in the western world. From the moment you touch down on the gravel airstrip until departure, the mind is lost to the bush.

The lack of interest in the country by tourists, big corporates, and foreign investors due to the publicity it has received in the last two decades can be seen as a positive thing by those longing for the Africa of old – the wild expanses remain, well, wild! And for the privileged few who are fortunate enough to venture into this unknown patch of green on the map in the dark heart of Africa, this forgotten wilderness will certainly not be forgotten. 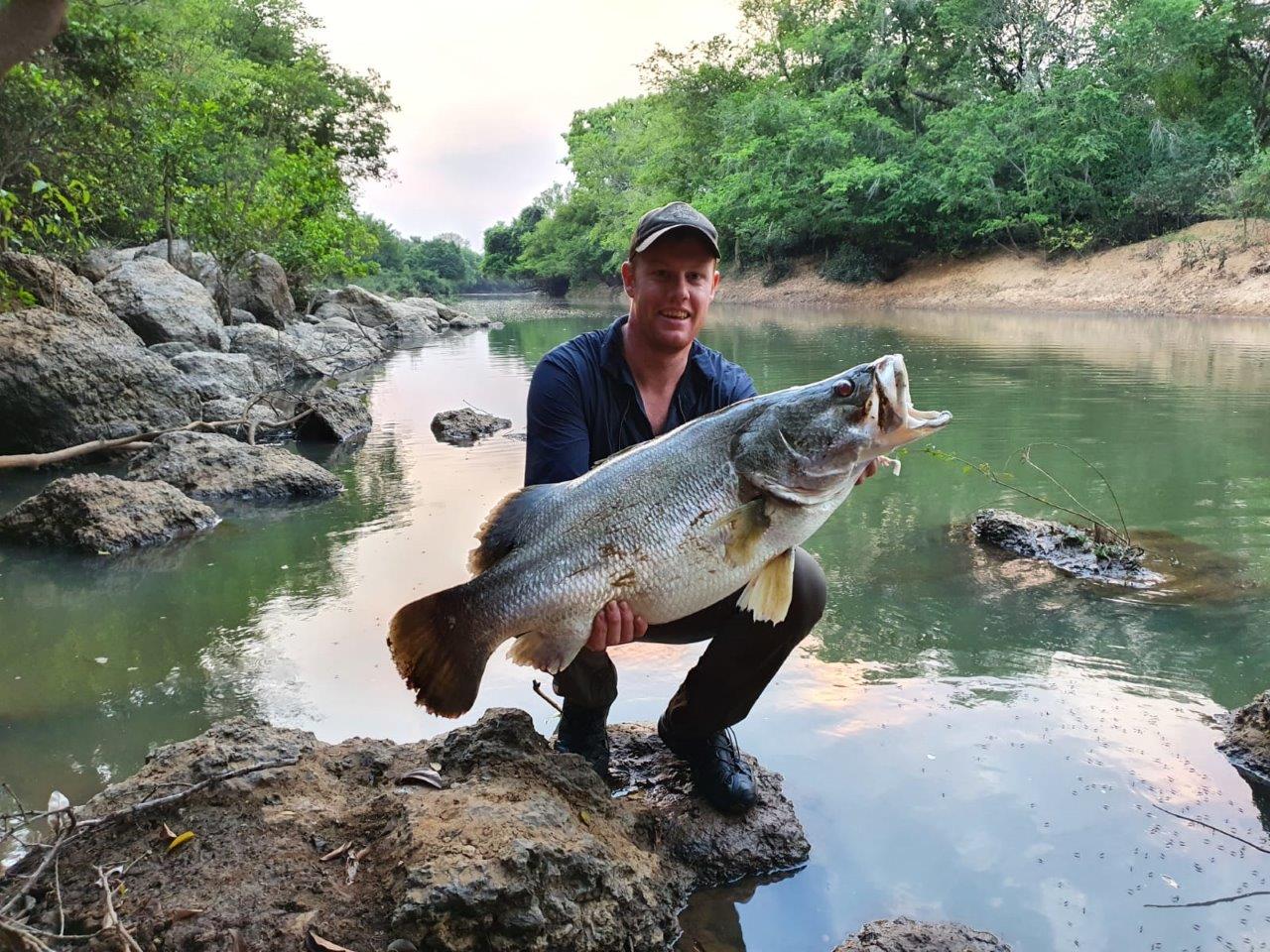 Author with a 35 lb Nile Perch from the Vovodo River. These heavy brutes are quite common, engulfing lure, fly or bait with a force that will test any angler’s ability and tackle. Also – their big, buttery fillets provide excellent eating! 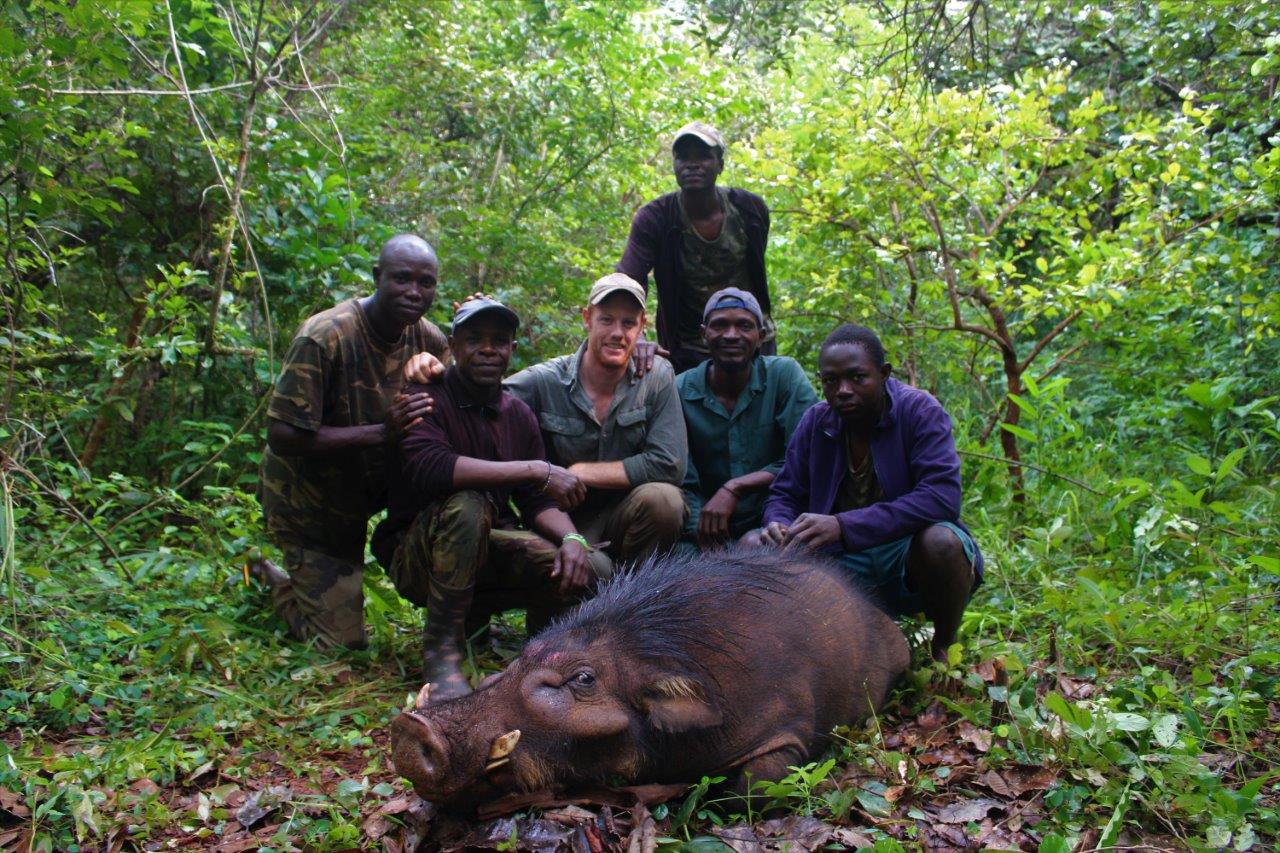 Author and trackers with a GFH after 3 hours of tracking through the Gallery Forest.

Andrew Gooden is a Professional Hunter based in South Africa. He has been hunting in the CAR for the last two years. For additional information or queries contact him at andrew@wildlandsoutfitters.com or +27 62 936 6790 (WhatsApp).