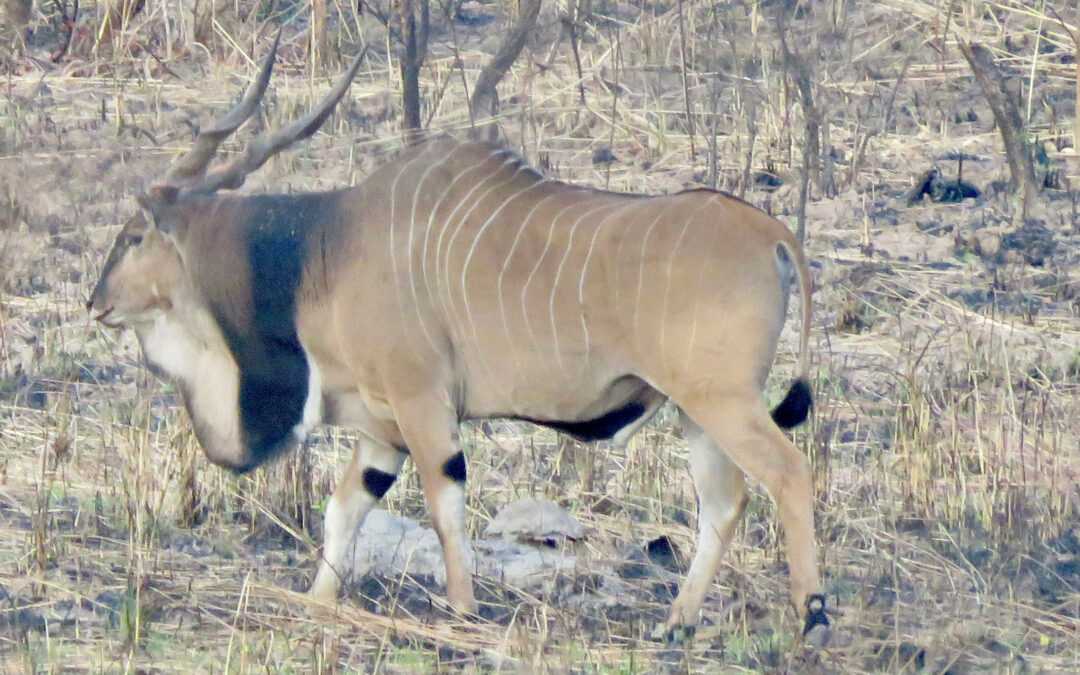 Having previously and successfully hunted with Will Parks for a Lord Derby a few years earlier, we agreed that on this our fourteenth hunt together, we would look at as many eland as possible for at least the first week and then come the second week we would settle for something big, mature, and with a certain shape of horns.

Of course it is important to note that there are very few areas where this is possible to do, and Faro Lobeke’s block 16 is one of those areas. It is the largest, if not one of the largest, area in the northern savanna region of Cameroon, spanning some 400 000 acres. It is an extremely well looked after area with serious anti-poaching teams on the ground backed up by an aircraft above, and a low off-take of animals for the size of the area. The camp is situated on the banks of the Faro River, with a superior road network in a block which is loaded with game – and in my opinion unquestionably makes this the premier hunting destination in Cameroon. Of course, the unfortunate thing for most people is that hunting here comes at a premium price which, after all said and done, is well worth of the product. 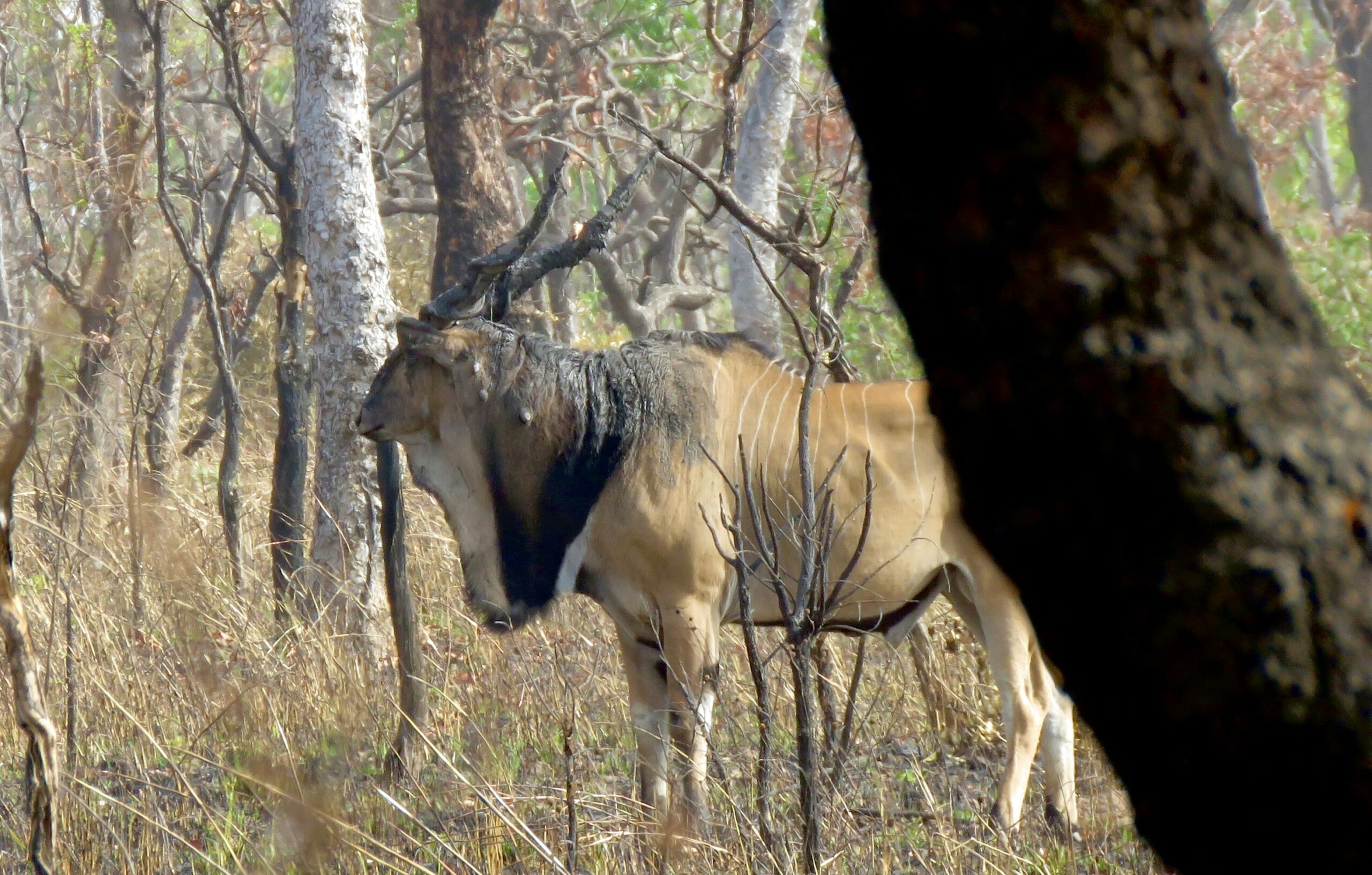 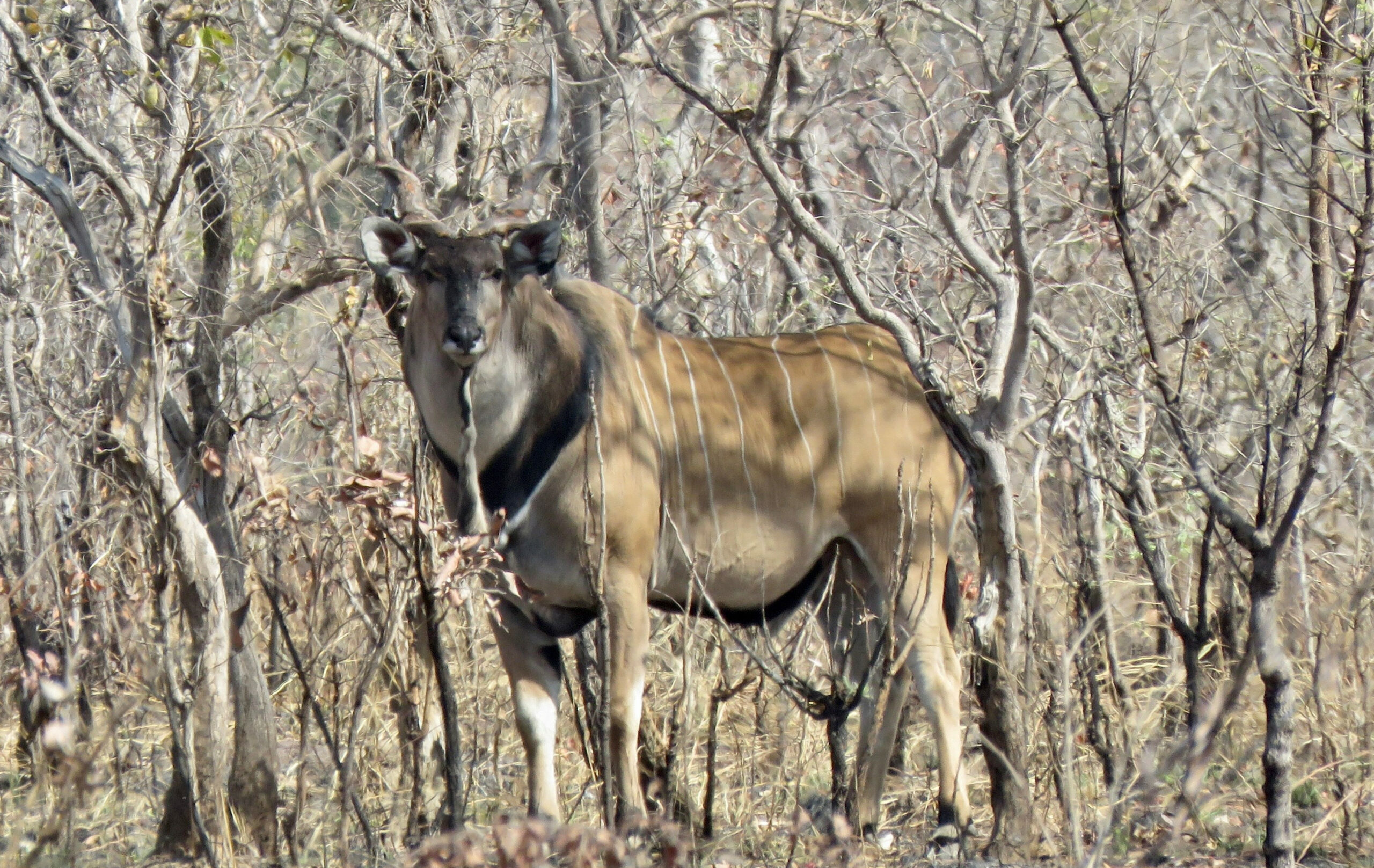 The very first morning of the safari we headed south, and about 40 minutes later we cut some eland tracks across the road. Assessing freshness of tracks and wind direction, we decided to follow. Prepared for a long day ahead, we filled our camel backs with water, geared up and proceeded to start tracking. Surprisingly, only 15 minutes in I spotted some movement up ahead, and after picking up my 10×42 Swarovskis I noticed the unmistakable markings and colors of, in my opinion, the most beautiful antelope in the world. The wind was perfect and blew steadily in our favor.

Will and I slowly and carefully moved forward towards the eland, only then to notice that they were in fact moving in our direction. We settled down behind some cover and waited, letting them come to us. Eland have this habit of meandering randomly and can be one of the trickiest of animals to track, often doubling back on their own tracks and changing directions for no apparent reason. It was a small group consisting of what clearly was a female on heat, two big mature bulls, two immature bulls and a couple of other females and young. What followed was possibly the best hour of Lord Derby Eland hunting one could possibly wish for. 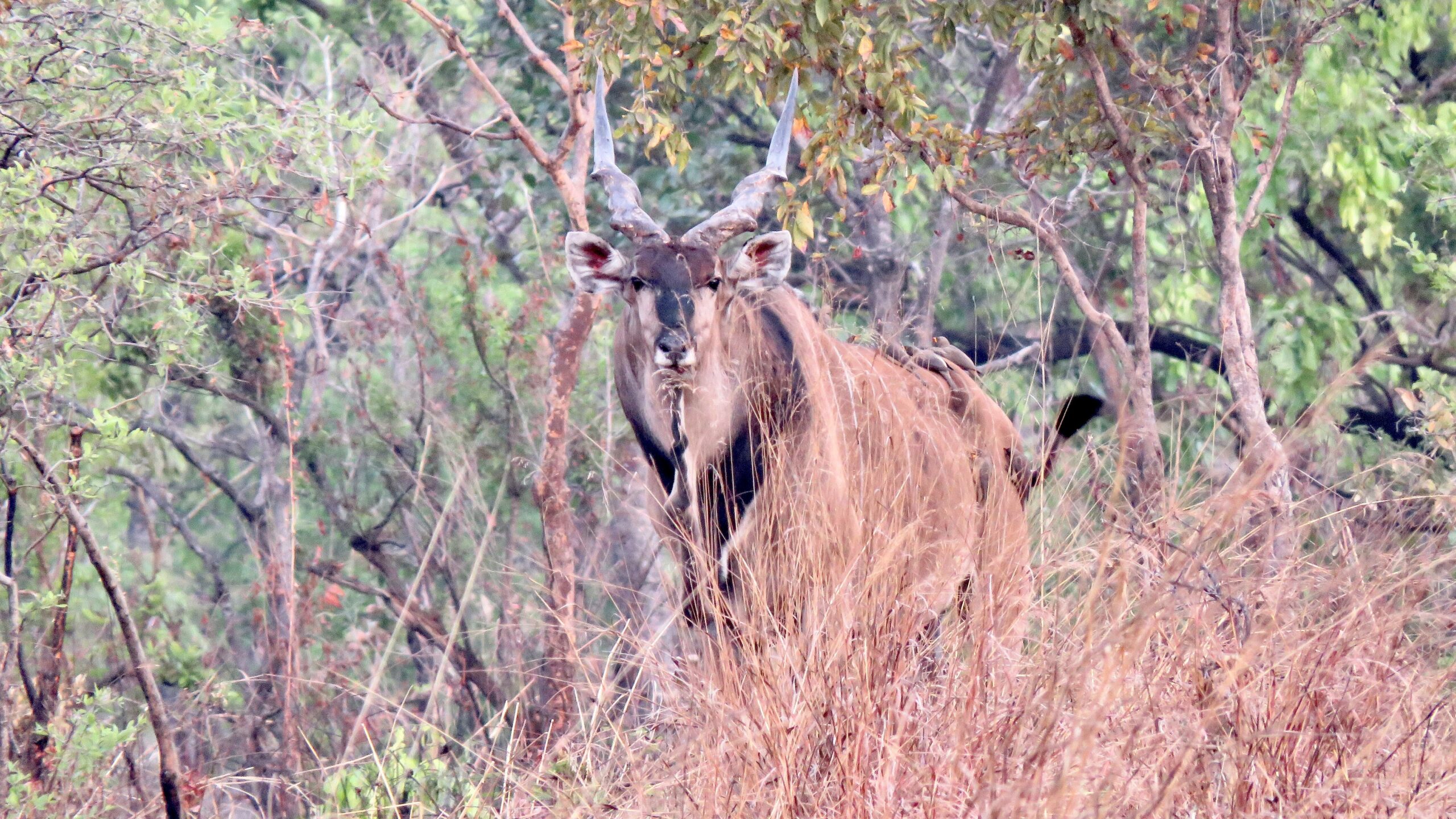 The female on heat walked to within about 50 yards of us, followed by an old, big-bodied bull with a massive neck and short horns, who was clearly interested in her, and not too far behind them another beautiful bull with a beautiful

set of horns covered in mud. The female on heat came to a standstill under a shady tree no more than 75 yards from where we were sitting undetected. For a solid hour, with some at no more than 50 yards from us, we watched a group of Lord Derby eland just being Lord Derby eland. We could smell them. They have such a distinctive smell. We could hear some of the grunts they were making. Not once were they ever aware of our presence. I managed to take some decent photos and short video clips before they decided to meander off at their own pace.

Will and I said that under normal circumstances and in many other areas we would’ve probably shot one of those two big bulls the moment we had an opportunity, and been happy, but by doing that we would not have experienced what we did. It is the area that we were hunting in that afforded us the opportunity to be able to do this. During the course of the hunt we went on to see another 12 mature bulls which we could’ve taken and been happy with, but passed only because that would’ve meant the fun would be over. On the tenth day of the safari, Will saw the one that ticked all of the boxes for him and was the one we decided to take.

I will remember this day as the day I spent some time among giants! 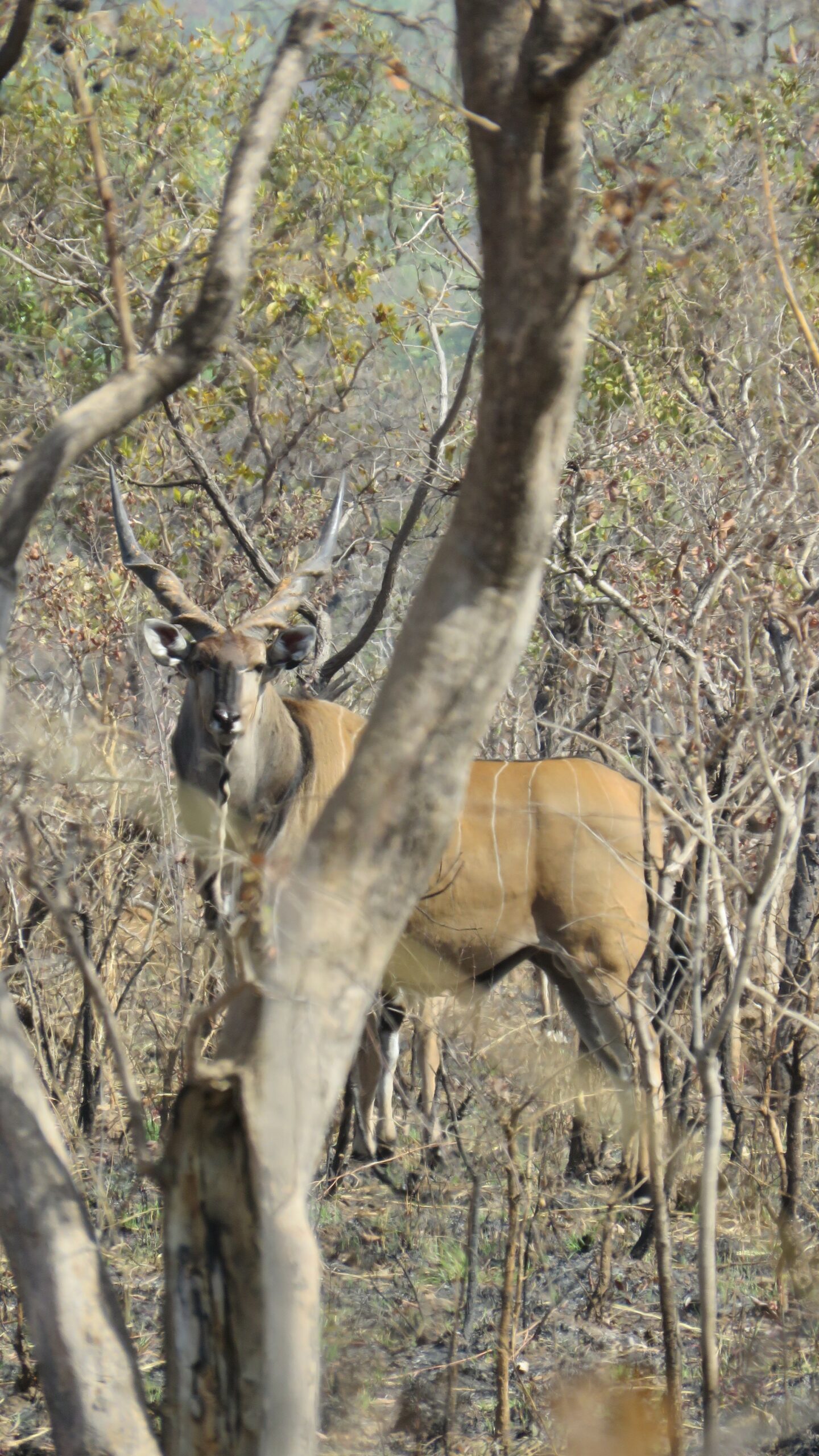 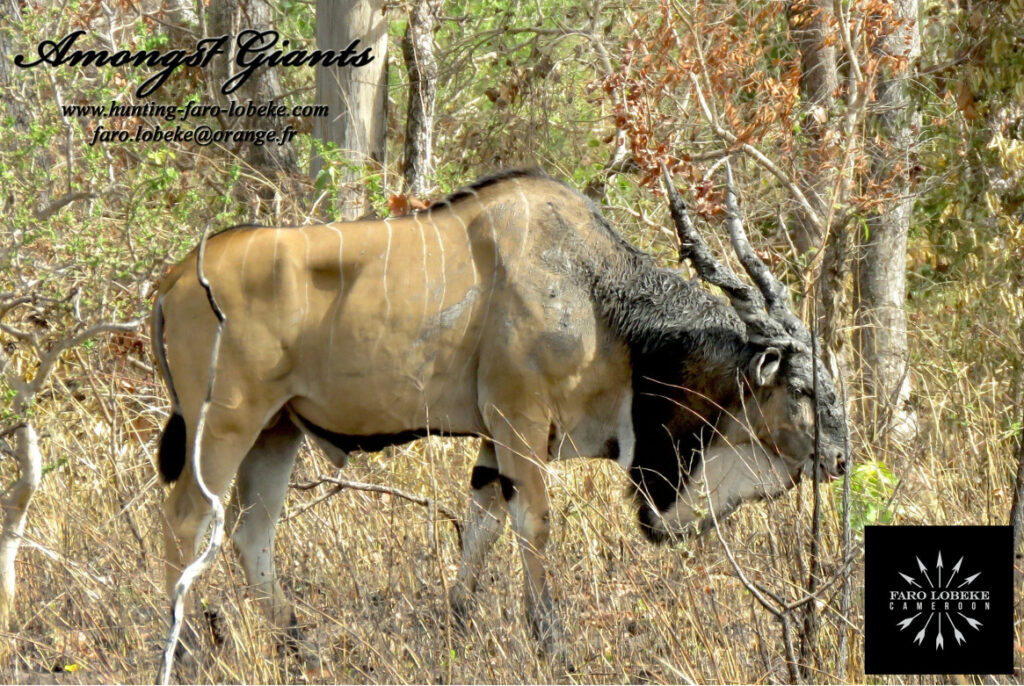