Four Friends and a Safari! 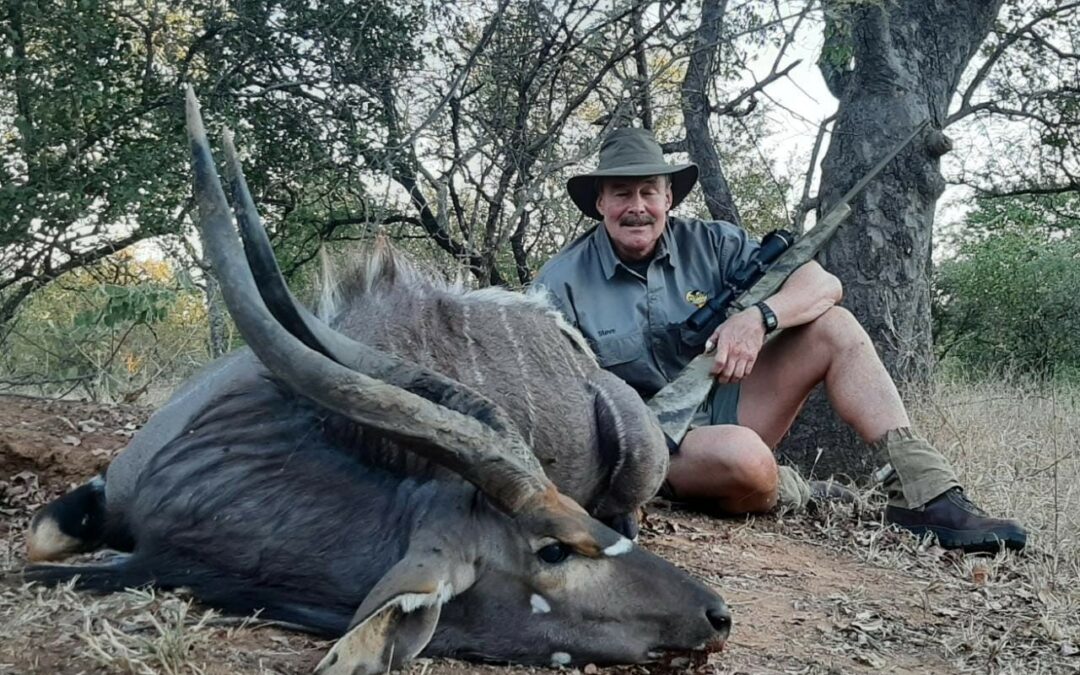 Steve B. and his Nyala.

It was 16 April 2021, a day that had been in my thoughts for over 25 years. It was special because it was my last day as a detective with the Milwaukee Police Department. I was retiring, and nearly everyone was asking me, “How does it feel?” or “Are you excited?” My response to all of them was, “Honestly, I haven’t even thought about it. I’m too excited about Africa.” This was because two days later, my wife Carol and I, along with our friends, Mike, Nicole, Steve, and Belinda were heading to South Africa… Finally!

We had originally scheduled for May 2020, but Covid-19 happened.  We rescheduled for September, hoping it would be OK by then… I was wrong! We optimistically rescheduled once more, and this time the day finally arrived.

We had booked a two-week safari with Chivic African Safaris in the Limpopo Province of South Africa. Carol, Mike, and I had all been to Africa on previous safaris, but this would be the first trip (I’m guessing with many more to come) for Nicole, Steve, and Belinda. Mike, like me, had fallen in love with all things Africa on his first safari, and couldn’t wait to share it with his wife Nicole. Steve told me how, for almost 50 years, he had dreamt of hunting in “The Dark Continent” and jumped at the opportunity to experience it with Belinda. Carol and I couldn’t have been more excited to finally get back to Africa, and this trip we had the added bonus of sharing it with really good friends.

Mike’s number one priority was to hunt a big, mature Cape buffalo bull, with the added pressure of sneaking in close enough for him to use his brand-new double rifle. He also wanted to settle the score with a kudu bull, a game that had begun almost four years earlier on his first safari. Steve simply wanted to “soak everything up” while he was in South Africa, and created a list of plains-game animals to focus on – kudu, gemsbok, springbok, and impala. He was also happy with the age-old adage of, “taking what the bush offers you”. 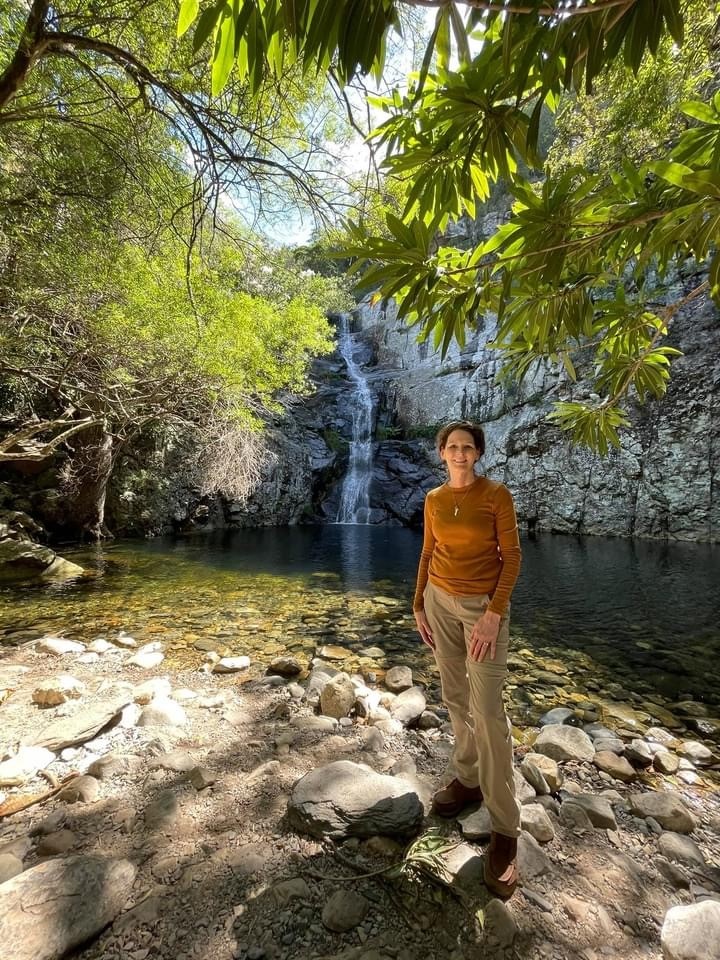 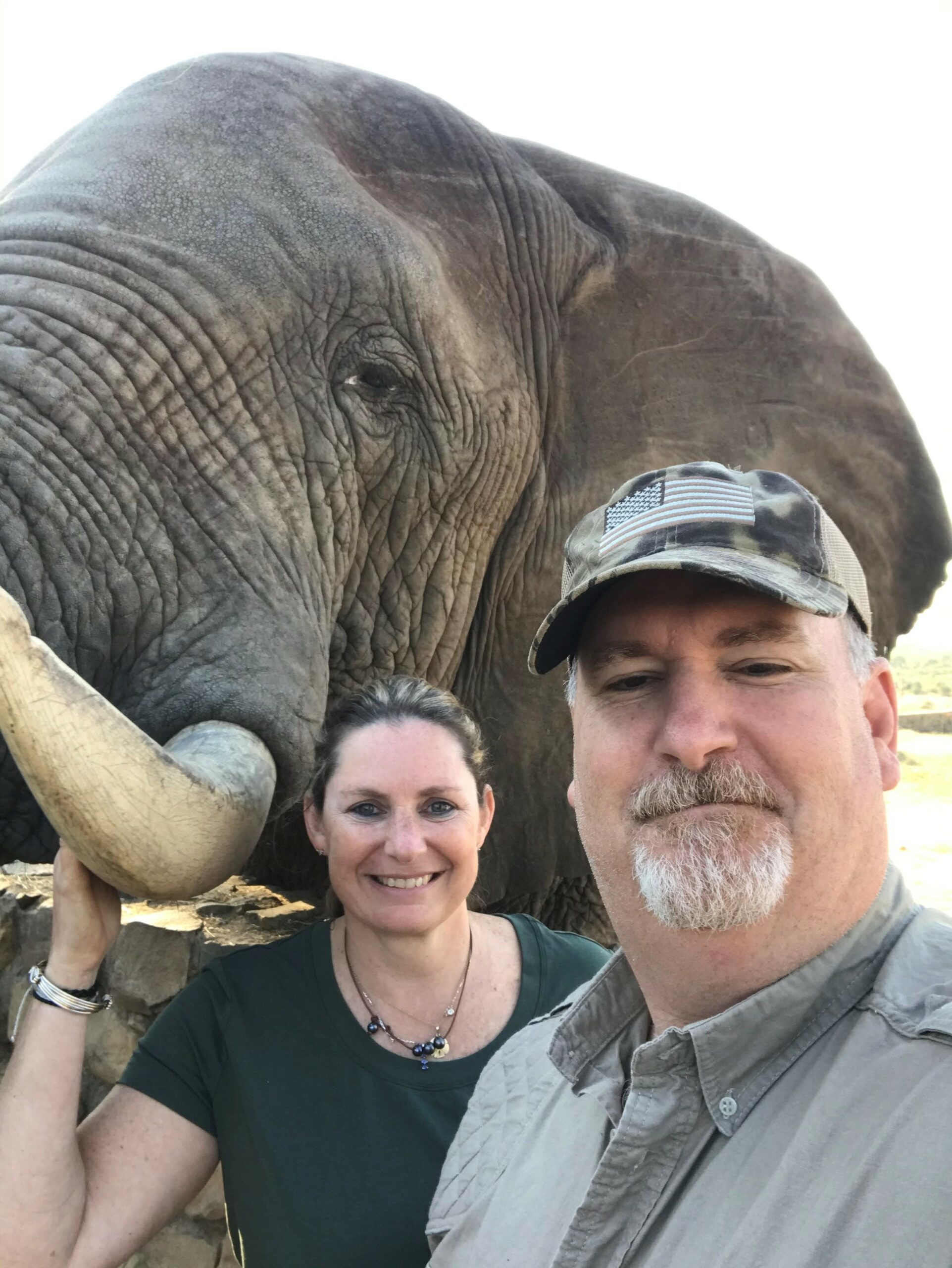 Day 1 began at sunrise, just after breakfast. Steve set off in one direction with thoughts of a big kudu bull standing broadside behind every other mopane tree they passed. He didn’t find his big kudu bull that day, but did have an opportunity at a huge nyala, a blue wildebeest, and a zebra, all of which he passed on, opting to hold out for Africa’s “Grey Ghost”.

Carol and I rode along with Mike and his PH Johan, as they searched for the big bulls that had left the salad-plate sized tracks in the sandy dirt. Christo Joubert, the owner and outfitter of Chivic African Safaris, had secured two special permits for Mike and me, permits for two old Cape buffalo bulls, both of which had to be well beyond their prime, in a Big Five area. There would even be the possibility of seeing and/or encountering all five members of the famous Big Five, which became abundantly clear only an hour and a half into the morning’s hunt.

We were lucky enough to have discovered tracks early in the morning, which appeared to have been left behind by a group of four or five bulls who were no longer with the main herd of buffalo. As we followed the tracks, it seemed as if we were making progress and actually catching up with them.  It was around that time when we discovered we were not the only ones who were tracking the bulls. Johan was quick to point out the very fresh lion tracks that were on top of the buffalo tracks we were following. This meant our already dangerous hunt just got even more dangerous and challenging, a detail my lovely wife was very quick to point out!  Johan told us Cape buffalo by nature are constantly on edge so that they don’t become the next meal for a pride of lions. 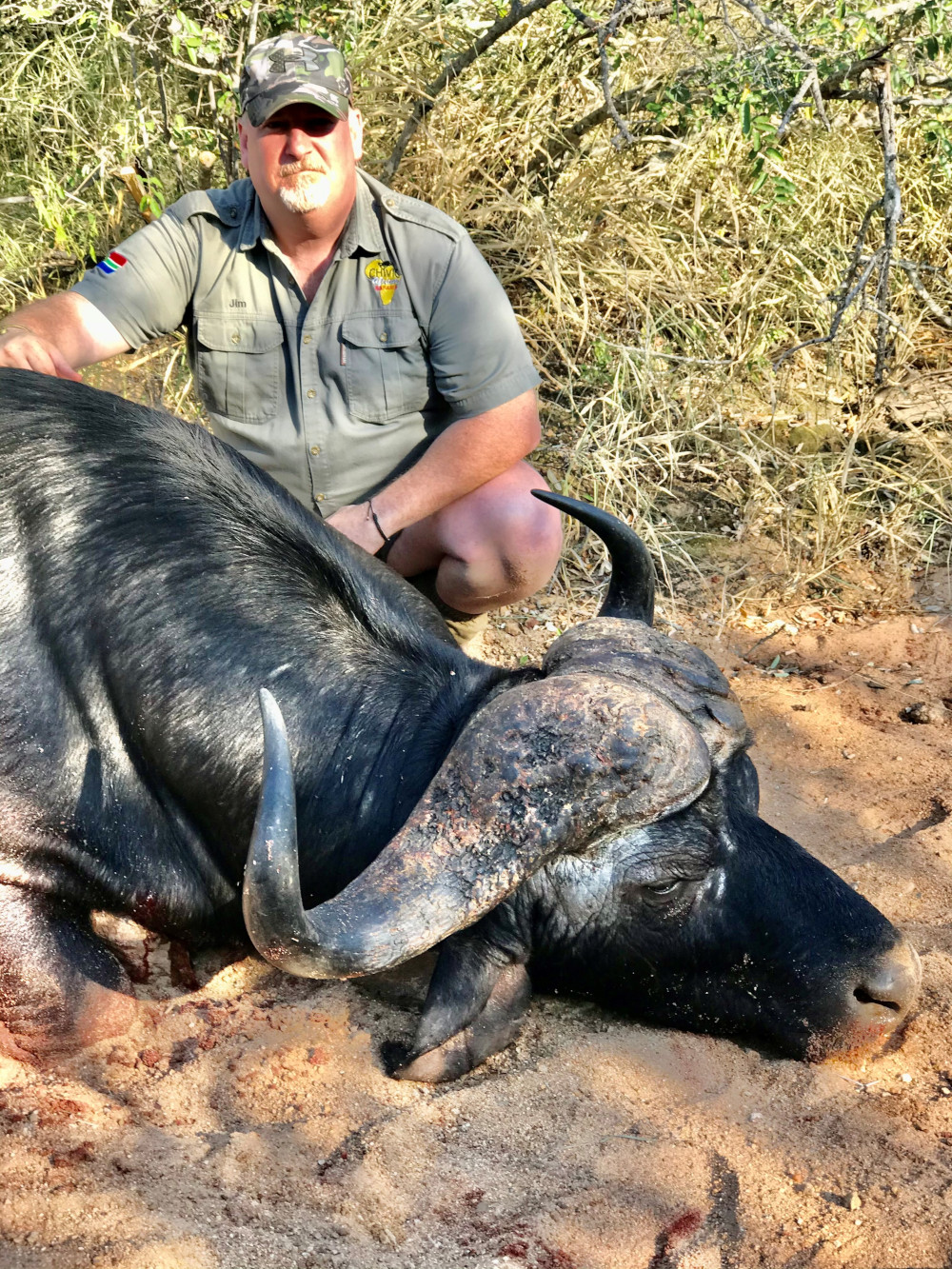 Jim Hensley and his Cape buffalo.

Now, not only did we have to try and sneak in on the buffalo, but we had to do it while lions were trying to do the exact same thing as us.  We pressed on, and I thought to myself, “What are the chances?” Frankly, I was torn, thinking about how special it would be to see lions, while at the same time thinking about how that would also negatively impact on our chances of Mike getting a shot at a buffalo… with the added danger factor sprinkled in as well.

It was only about twenty minutes later, while everyone was focused on the buffalo tracks and trying to see a big buffalo bull in the shadows ahead, that movement to my right caught my eyes.

“Lions!” I blurted out, spotting three lions creeping through the long grass only 50 short yards away. There were two males and a female, and they were after the exact same buffalo we were tracking. We all instantly froze.  Johan assessed the situation while Carol took as many photos as she could. After a few mesmerizing moments, we quietly headed off to our

left – far off to the left – hoping that we would circle around in front of the buffalo and have them stroll into where we would be waiting for them while the lions continued to do their thing and possibly push them right to us. In theory, it was a great plan, but unfortunately it didn’t pan out for us. As buffalo so often do, the bulls meandered in the other direction, and despite our best efforts, we weren’t able to get close enough for a shot.

As we continued our search for buffalo, we were able to locate a lone bull sleeping underneath a mopane tree, but as we snuck in to within shooting distance, the slight tickling on the backs of our necks told both us and the formerly sleeping buffalo that the wind had changed and was now heading directly towards him. The buffalo took less than a second to get to his feet, and with a snort ran off in the opposite direction. We did what all buffalo hunters seem to do in this type of situation – comment to each other on how close we had come and how great it would’ve been if we had only had one more second! Then we headed out in search of more tracks.

By the end of the day, Mike was able to get on the shooting sticks a couple of times, but unfortunately the old buffalo bulls did not cooperate long enough for him to get a shot off.

A day spent chasing Cape buffalo is never wasted, but this particular day, even without bringing down a buffalo, was incredibly special. Apart from our run-in with the lions, later in the afternoon we rounded a corner and came face-to-face with four rhinos. We took as many photos as we could in a very short time, and then backed away before our “incredible experience” turned into something very different. By the end of the day, we had seen not only all five of the Big Five, but while eating our lunch next to a dam that had many hippos and crocodiles, we ticked the boxes for the Dangerous Seven as well.

Day 2 began much like Day 1, with Mike going for his buffalo bull and Steve setting off in search of his kudu. The difference came when a huge sable bull stepped out in front of Steve. This is when he experienced exactly what the phrase, “taking what the bush offers you” truly means.  In a fraction of a second Steve got his rifle onto the shooting sticks and slowly squeezed the trigger. The sable bull, possibly Africa’s most regal and stunning antelope, leaped into the bush, stumbled, and then quickly went down. Steve officially had his first African animal. Johan received a message on his cell phone that simply read, “Steve got one in the salt!” later with a photo of Steve hunkered down behind his sable. Johan had assumed the message referred to a kudu, and the picture of the incredible sable was a pleasant surprise. Steve’s smile matched the arc of the sable’s magnificent horns! 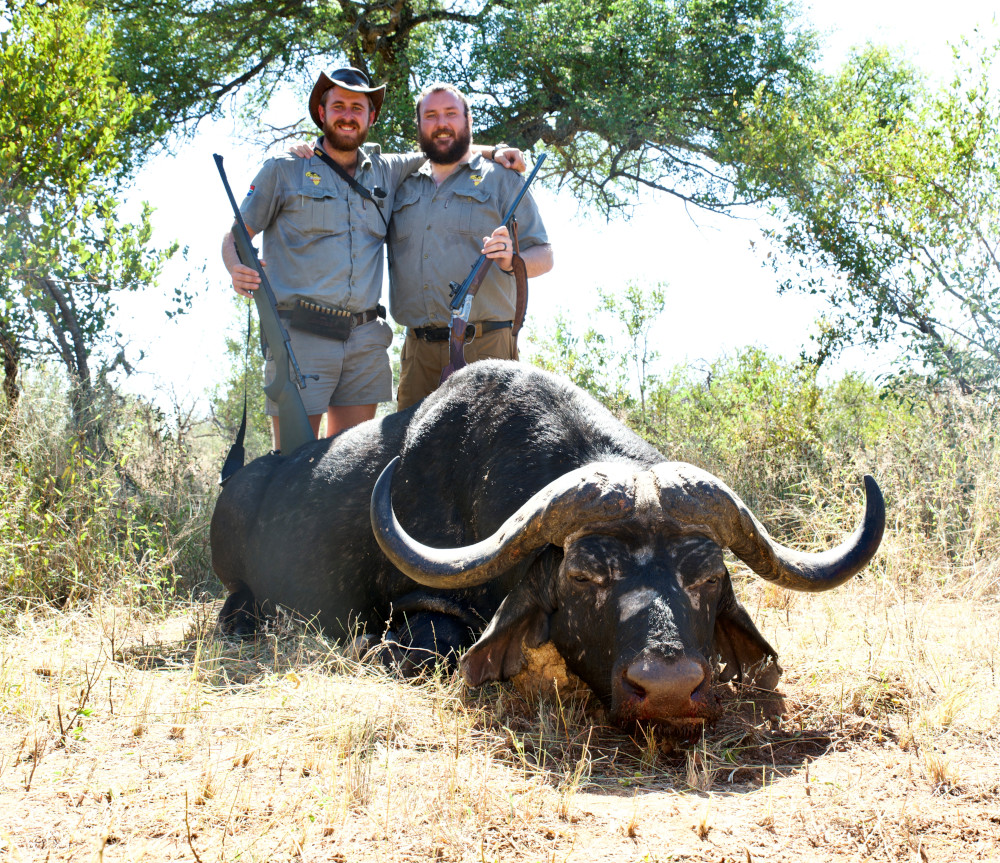 Mike C. and his Cape buffalo.

Steve and Belinda with Steve’s sable.

​Meanwhile, Mike was not to be outdone, and setting his double rifle on the shooting sticks, he tried to settle the tiny red dot that was bouncing around in circles on the buffalo’s right shoulder. When the red dot finally settled, Mike squeezed the trigger of the .450 NE. As the old bull bucked and turned to run off, Mike managed to set the rifle back down in time to squeeze off the second trigger before the bull disappeared in the thick bush. Johan and Mike followed the buffalo’s tracks that led into the thickest bush on the property… of course. As they did, the blood trail became easier to follow until they were close enough to see the bull slowing down, walking away through the bush.  Mike’s double rifle sounded off again with two more quick shots, and the buffalo was off into the bush yet again. This time the old warrior didn’t go far, and they found him lying on the ground. With one more insurance shot, the buffalo hunt was over, and the picture-taking had begun. The old bull’s bosses were worn smooth, and the horns were wide, exceptionally thick, and heavily marked by countless numbers of fights over the years. Most of the hair on his face was long gone, leaving the look and feel of white-colored sandpaper wrapped underneath the massive set of horns.

We took the next few days to enjoy Africa without looking down the barrel of a rifle, and started by spending a day inside the famous Kruger National Park. Christo’s daughter, Karen, who is married to Johan, is in the park on a regular basis, and she has the unique ability to go exactly where the animals are, and drove us through her favorite spots. By the end of the day we saw just about everything you could imagine as we made our way through the park, from the smallest dung beetle to numerous herds of elephants, including many babies, ending with a pack of wild painted dogs trotting by within a few yards of the truck.

Karen ensured our safari was not just a hunting safari. She took us hiking by an absolutely stunning waterfall, feeding a truly wild hippo, and treating us to an elephant experience where we could be with and feed wild elephants. She also arranged for us to visit one of the local schools that Chivic African Safaris works with, and we were able to distribute things we had brought along for this visit – some school supplies, health care items, and toys for the kids. Karen and the rest of the Chivic team also arranged a surprise birthday party for Mike with an incredible dinner under the stars in a dry riverbed, complete with a tower of cupcakes, hanging lights in the trees and, of course, a campfire.

By the end of our safari, Steve had his incredible sable, a beautiful nyala, and his kudu bull. Mike was finally able to settle his score with a big kudu bull, a great Cape buffalo bull, and a zebra and a nyala. For me, I was very fortunate to also have an incredible buffalo hunt, but that’s a story for another time, perhaps around the evening campfire. In the end, the best part of the trip was being there with my wife and good friends.

For us, every trip to Africa has been such an incredible experience, and the only possible way to make it better is to share it with others, and we were able to do just that on this trip.