Hunting buffalo in the Eastern Cape

After having to cancel our 2020 trip we were finally headed back to South Africa. The flight from Washington DC to Johannesburg was uneventful and, as he always is, Mr X was waiting for us as we exited the baggage collection area. We collected our firearms and headed to the Afton House for another great stay. In addition to my wife, we were also accompanied by Shawn Holsinger, Shawn’s wife Kelly and his daughter and son-in-law, Mikala and Cooper.

The next morning, we were back at the airport for the short flight from Johannesburg to Port Elizabeth. And after a very scenic two-hour drive from Port Elizabeth, we were in camp at Molweni just outside of Adelaide in the Eastern Cape. After my first trip with Dubula Hunting Safaris in 2016, I fell in love with this area and my wife Deb and I became close friends with owner/PH Ryan Beattie and his wife Evern.

This trip was very different for me as my primary goal was to accompany Shawn and his family, who were on their first trip, so I had no list of animals like I usually would. My plan was to just take each day as it came and see what opportunities might present themselves. This approach allowed for a very relaxed and successful hunt.

Shawn also had a very successful trip; he took a beautiful Burchells Zebra in the first few days, and thena very nice Blue Wildebeest. Before Shawn’s seven-day hunt was over, he was also able to take a Kudu, Common Springbok, Black Wildebeest, and White Blesbok. 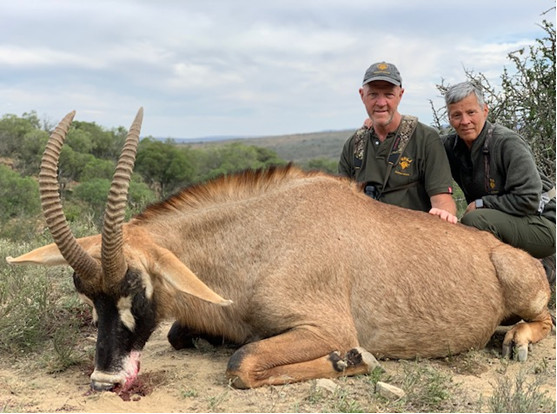 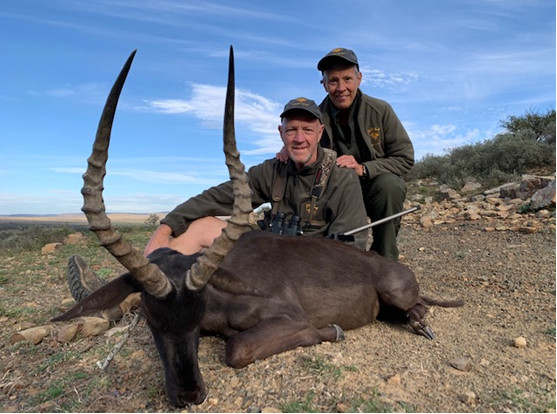 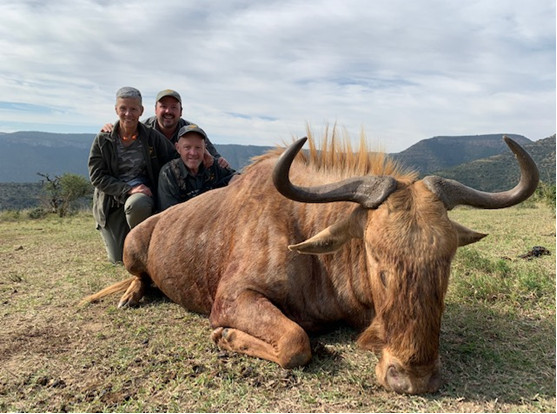 We did a lot of walking in the early days of our hunt and ended up shooting a few cull animals. On day three my tracker, who has amazing eyesight, spotted a Golden Wildebeest so far away I have no idea how he was able to make out more than a speck. During my 2019 hunt, he did the same thing for a beautiful Sable I was able to take.

After a 15-minute ride we were out of the vehicle and the stalk was on. This stalk was especially challenging due to large number of Red Hartebeest and Blue Wildebeest we encountered; however, Ryan was able to get me within 219 meters, and one shot from my Thompson Center Venture II .30-06 took down the antelope. What a beautiful animal and amazing experience.

A few days later we hunted another property for a black impala. After a short drive and stalk, I took a beautiful ram. The property we hunted also had roan antelope, so we spent the next few hours driving and glassing look for a good speciman. We did eventually spot a very nice, mature bull which I was also fortunate to harvest.

Once Shawn and his family returned home, we spent the remainder of the time doing some additional cull hunting as well as trying to find a good-looking, mature male baboon. We were able to locate some nice baboons, but were never able to get a shot.

This was my fifth trip to Africa and third trip with Dubula Hunting Safaris. In May of 2022, I completed my sixth trip and finally decided to hunt for a Cape buffalo bull. After three days of searching, we finally caught up with a group of five bulls, four mature and one soft boss bull. After an hour on the shooting sticks, one of the mature bulls finally presented a shot and I was blessed to harvest my first Cape buffalo.

We already have of our seventh trip with Dubula planned for August 2022. If you’re looking for a place for your first hunt, or perhaps and new place to hunt, I would encourage you to hunt with Dubula Hunting Safaris. You won’t be disappointed.