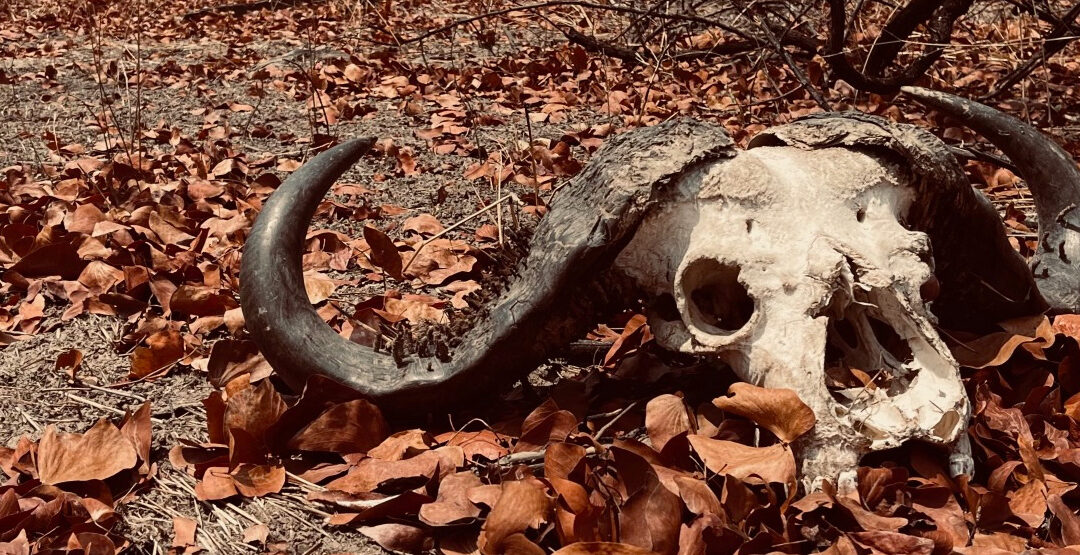 Certain tribes believe that a person has two births. The first occurs when one is physically born, the second when he is acknowledged as a person, reborn with purpose and direction. His mind and body is altered forever, and he has a clearer picture of his existence. He has been measured and found worthy to be given the name of “Bwana”.

Before his awakening, this Madala (old man) was a hunter. A true sportsman, as well as a conservationist of the land in which his quarry roamed. Revered by his youthful colleagues for his desire to stick to the old ways and, in his later years, his ability to captivate an audience with yarns spun of his exploits. Madala had hung onto every word that his mentors of old had shared, and therefore his pupils, in turn, followed suit. And although the thought of death only lurked in the darker corners of his mind, he knew that someday he would face this fear head on, and perhaps in a way he did not expect.

But as the dry African breeze dried the sweat from his brow, Madala’s apprehension had evaporated as he landedon the Dark Continent. He faced reality, and the change was stirring inside him as the Cruiser bumped and banged across the open savanna. His eyes were becoming sharper as he scanned the countryside for another sighting of game that just days before he had only seen in the books by Ruark and Hemingway that had long ago collected dust upon the shelves of his library. He was becoming keener of his surroundings and of the change that was taking place inside him. He knew nothing would prepare him for the unexpected other than in such a venture; he was allowing himself to be vulnerable and ready to accept the full and complete experience of what was to come.

On the first day, Madala was given a tour of the concession, weapons were checked for zero, lunch was served and by the middle afternoon he had taken a beautiful impala ram. A great specimen in his prime, this ram possessed a flawless coat and a spectacularly matched set of long, black horns. The stalk to the ram and the shot placement had been perfect. The team understood Madala’s emotions, knowing how he felt, and drinks were poured in the shade of an enormous sausage tree.

Then Madala got a shock. A buffalo had been added to his quota. He was expecting only to hunt classic plains game, partly to protect his pocket, and partly because he had not wanted to tempt fate on such a desire that he had only dreamed about his entire life. The next day would be a new adventure that he had longed for, but the night would be spent in anxiety thinking about matching his skills against such a formidable quarry. A sleepless night in a stifling chalet. And the sounds of hyenas fussing around the skinning shed did not help, nor did the scratching noise of the local hippo satisfying an itch upon the walls of his hut. He eventually slept for a few hours before dawn.

The morning sunrise was spectacular, and as the Cruiser 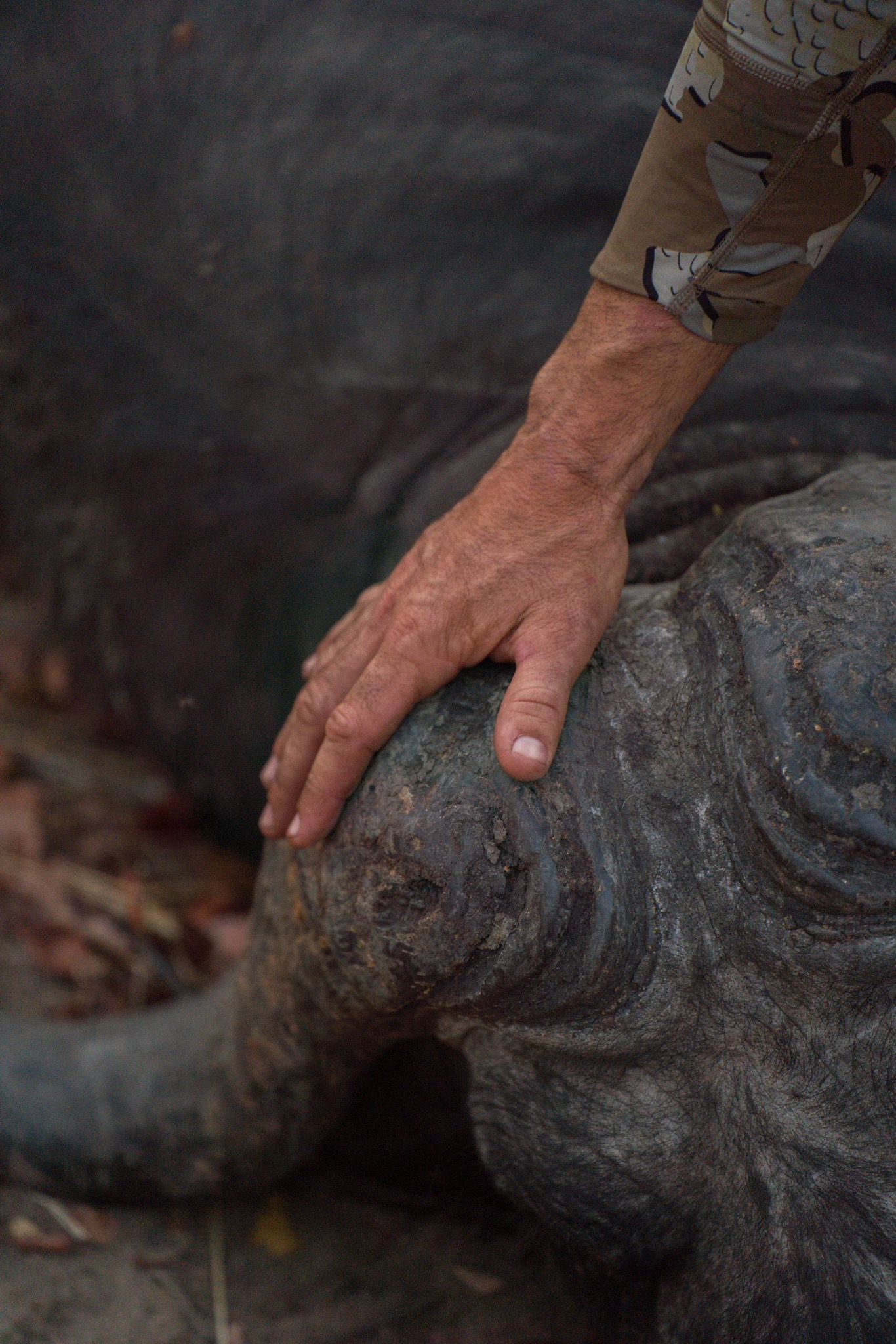 rounded a bend, the drum of the engine was muffled by the thunder of hooves of countless buffalo retreating from their nightly feast in the tribal fields dotting the Chifunda concession. Madala’s was awestruck at the sight of hundreds of buffalo seemingly at arm’s length. They were heard and felt as they melted in and out of sight through the dust veil they created. The trail was easy to follow but the stalk was not fruitful. The following days were full of many stalks upon herds of various sizes until finally his team found almost hidden tracks in an obscure corner of the concession. They were the magnificently large, the square tracks of several Dagga Boys.

Madala’s anticipation increased. His desire to pit his skills against the mighty buffalo were secondary to those of taking a true Dagga Boy – was this his opportunity? Would he get his chance to succeed? Could he control himself to make the ethical shot?

The tracks were fresh and the trail was followed carefully – the team knew what they were pursuing. The hunters stalked through ancient mopane scrub which opened to scattered grassy plains, only to be swallowed again by

areas of elephant-abused saplings. The heat was intense. Any hint of a breeze would be welcome to cool their bodies and help cover the sound of any noise from footsteps crunching on the crisp fallen leaves littering the ground in the Zambian dry season. 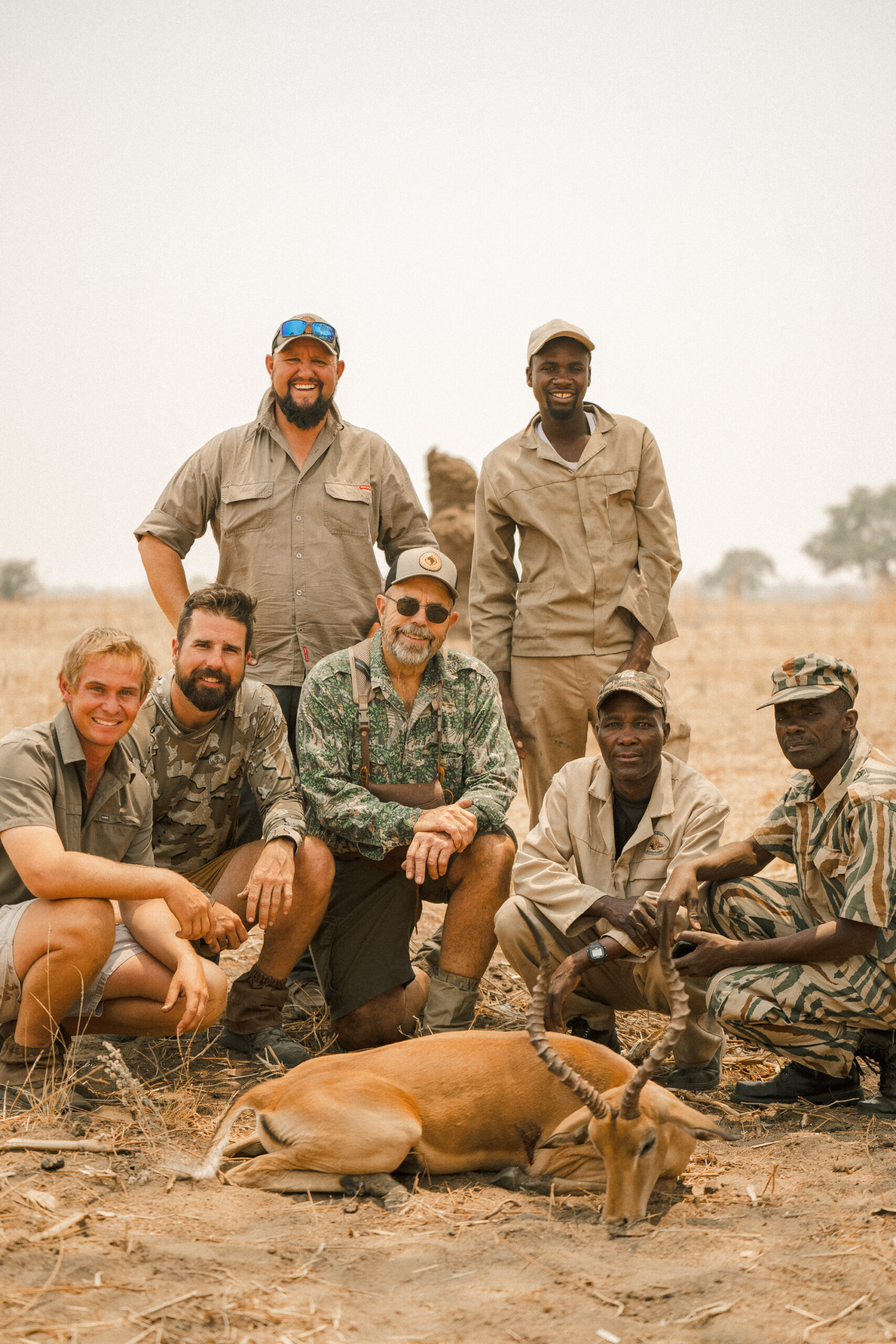 Dead stop. Dead silence. Barend Dorfling and Thomas Wilken, Madala’s dynamic duo of professional hunters, silently commanded their party to halt. Keen eyes had caught movement of a flapping ear and the horizontal outline of some obscure dark shape. At an uncomfortable distance, the black masses revealed themselves as the Dagga Boys that Madala had set off to pursue.

The professional hunters’ team silently observed each ancient warrior as they peered through the dusty lenses of their binos. There he was – the Dagga Boy of any hunter’s dream.  He lay motionless, grey and hairless, on the edge of the herd. The occasional flapping of his tattered ears to flick away the harassment of mopane bees was the only indication that this “madala” had lived long. He was relaxed, trusting the others to be on the alert. Hunter Madala was content to enjoy the sight until suddenly the spell was broken – Barend, with a little smile, passed down the big bore. He knew it was Madala’s time.

Madala imagined the scene as warfare of old. The hunters left the safety of the broken cover, one painstakingly cautious step after another, as they inched toward the group. With the stealth of Ninjas they silently they closed the distance. Sticks were placed and the rifle mounted. Madala’s adversary was unaware. The initial shot broke the silence, and follow-up shots ensured that the old warrior was down, while his cohorts were diverted by the barrage of Thomas’s warning shots.

Madala’s conflict was over. He caressed the worn, glass-smooth boss, such a boss that was possessed only by the oldest of old buffalo. Quietly he relived every part of the event. He was overcome with a deep emotion he had never experienced since the moment he had watched his own children being brought into the world. His rite of passage was done, his change complete. Madala himself had finally been reborn.

He had become “Bwana”. 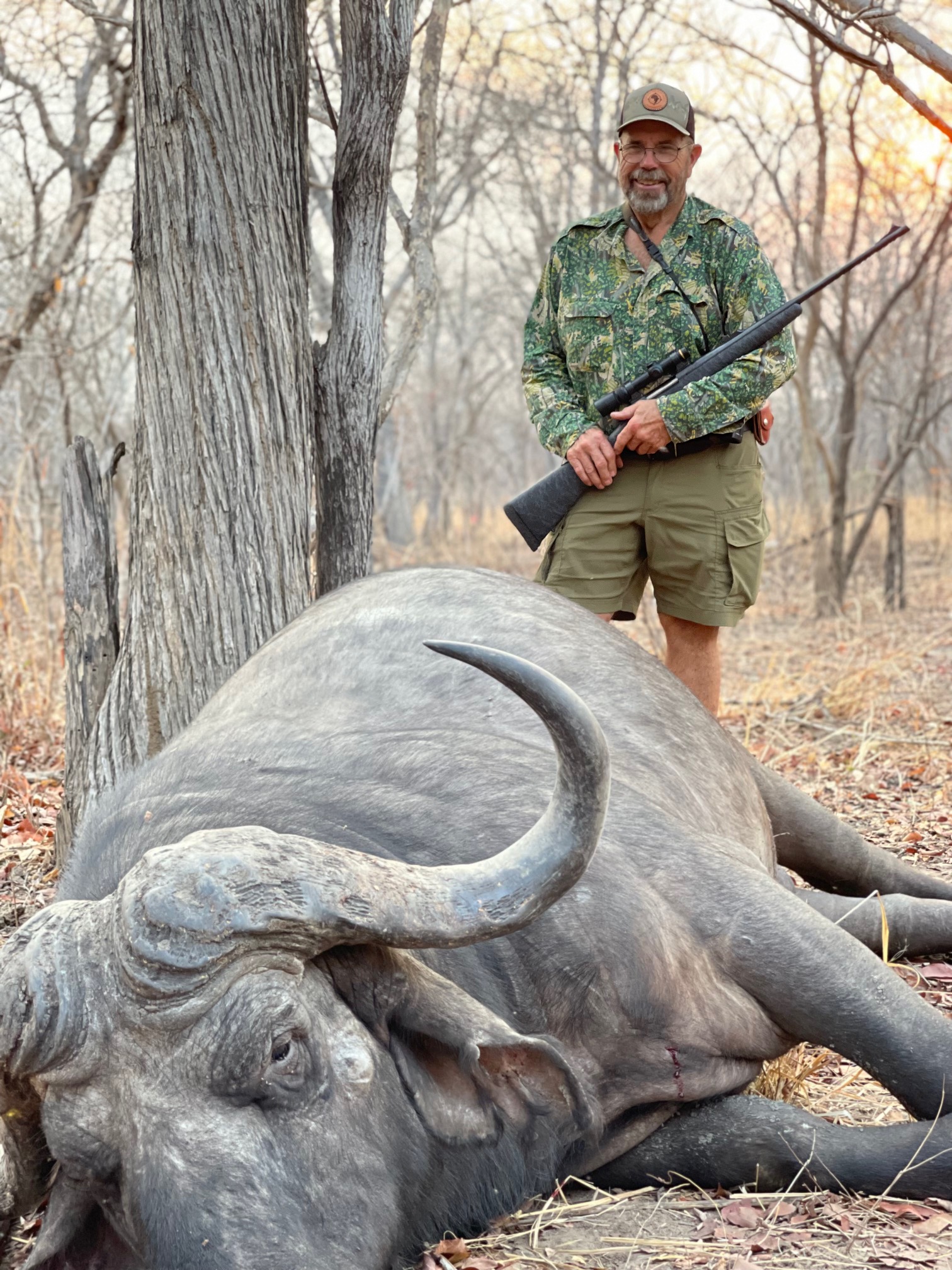 Mac was raised in the “Brush Country” of South Texas.  An outdoorsman, Mac has logged thousands of back country miles on foot where he cut his teeth chasing game across the southwest U.S. for himself or client. Mac’s primary focus domestically is physically challenging mountain hunting and overseas, the pursuit of dangerous game with rifle or archery tackle.