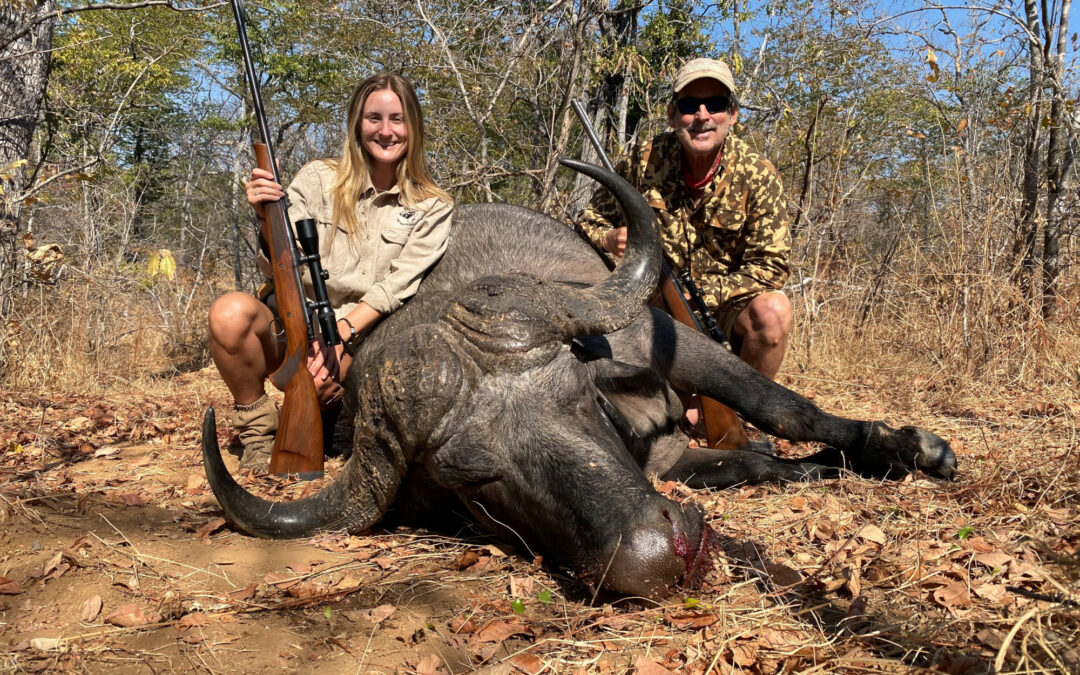 We had booked another full bag safari for 2021 with Simon and Kate Rodger’s Safaris de Moçambique. This concession borders Lake Cahora Bassa in Mozambique. My 27-year-old daughter would be the shooter, and her PH would be Brian Ellement, son of the well-known elephant hunter Mark Ellement from Zimbabwe. My son and I had hunted elephant with Mark about 20 years previously on a very successful hunt – we took a 58 lb tusker. We had met Brian and his sister during that hunt when they were about 10 years old, and now Brian was pushing 30! Mark has since passed on and is deeply missed.

We started off driving relentlessly searching for fresh buff tracks. After countless miles of driving and following buffs on foot, we were looking for a big, hard-bossed bull. Day after day we followed tracks until we made contact with herds of Dagga Boy groups. We would carefully maneuver, keeping the wind in our faces, crawling, sneaking, and trying to stay out of sight. KK had borrowed a .375 H&H and I had a .416 Rigby for backup. 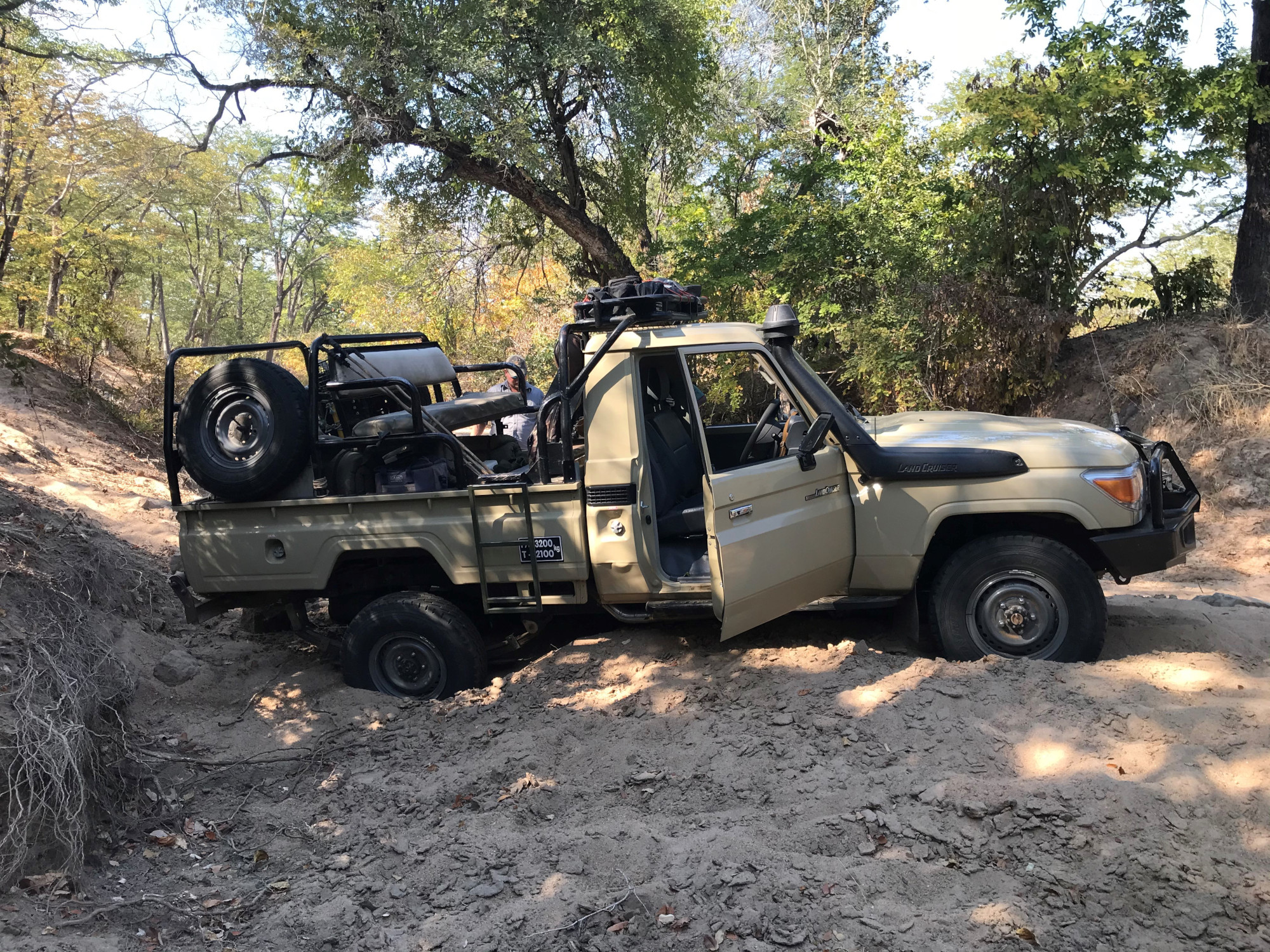 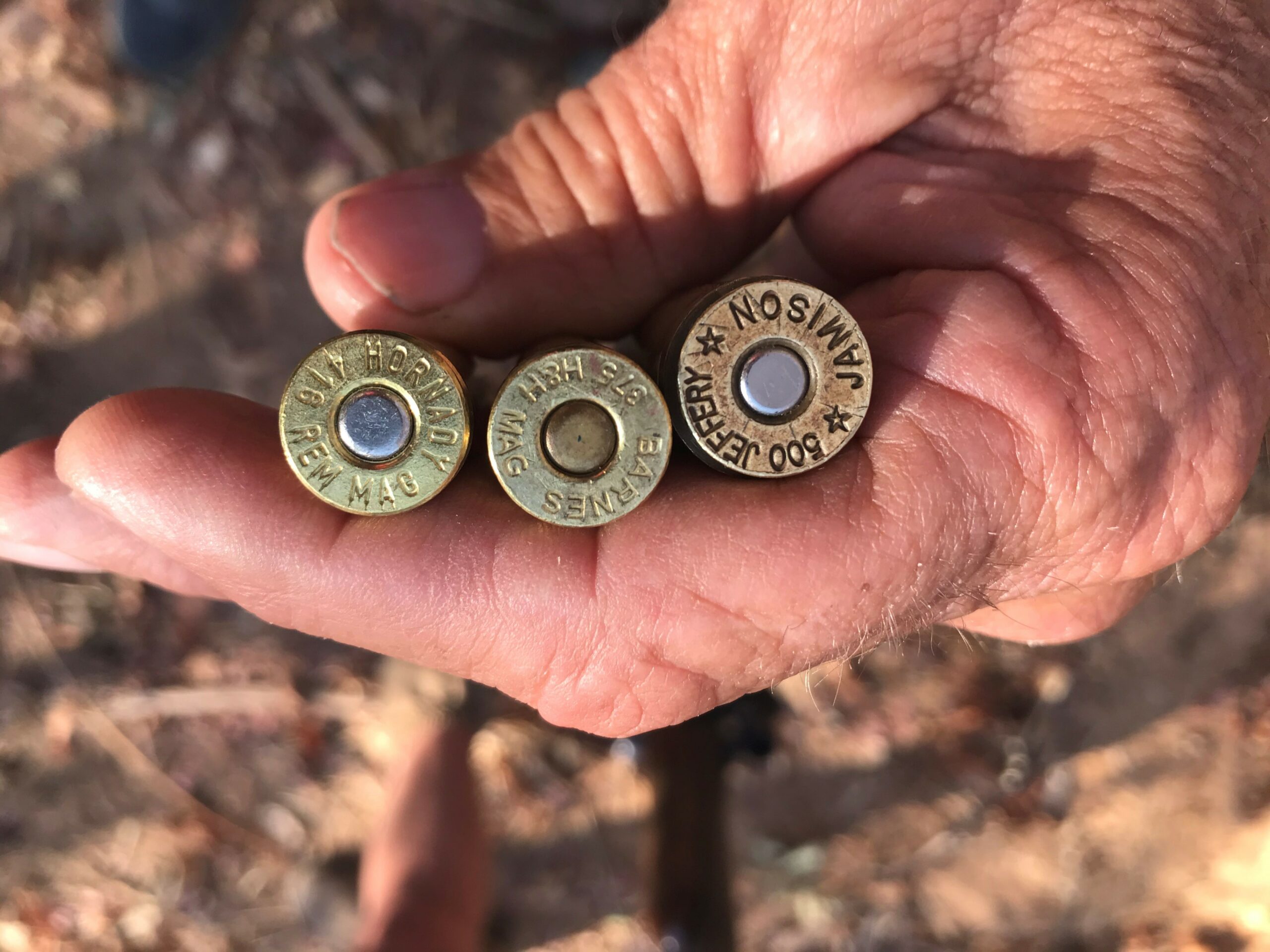 Finally, after looking over quite a few buffs, Brian whispered that there was a very nice bull in a group. We kept shifting constantly, trying to get into position for a clear shot. The buffs were on the move, feeding into the wind with heavy brush all around them. I stayed back a few yards as KK and Brian moved into position. I saw the sticks come up and it seemed like forever before the shot went off. I was trying to video with my phone camera, and at the shot I jerked the phone, not getting any of the action on video. KK said the shot felt good and that she had been aiming low on the shoulder. Soon we heard the death bellow coming from about 150 yards away. The trackers started smiling and laughing and everyone was elated! We found this magnificent bull and he was a beauty! That night there would be a ‘Dindine’ (local term for a party) which included a full-blown celebration with sundowners, hors d’oeuvres and buff-tail soup.

We had gotten word that an agitated bull hippo had been harrassing fisherman, and one man had been severely injured while tending his nets. We loaded our gear into the Land Cruiser and headed out early the next day across the million-acre concession to investigate the situation. PHs are often responsible for eliminating problem animals, and upon our arrival several local fisherman ran up to our truck and in their native tongue told our trackers what had happened. The injured fisherman had been taken to a clinic but they weren’t sure he was going to make it. Those tusks are capable of causing horrendous injuries. We were never able to locate this aggressive hippo, so we decided to hunt the huge vegetation-choked lagoon for a trophy hippo. 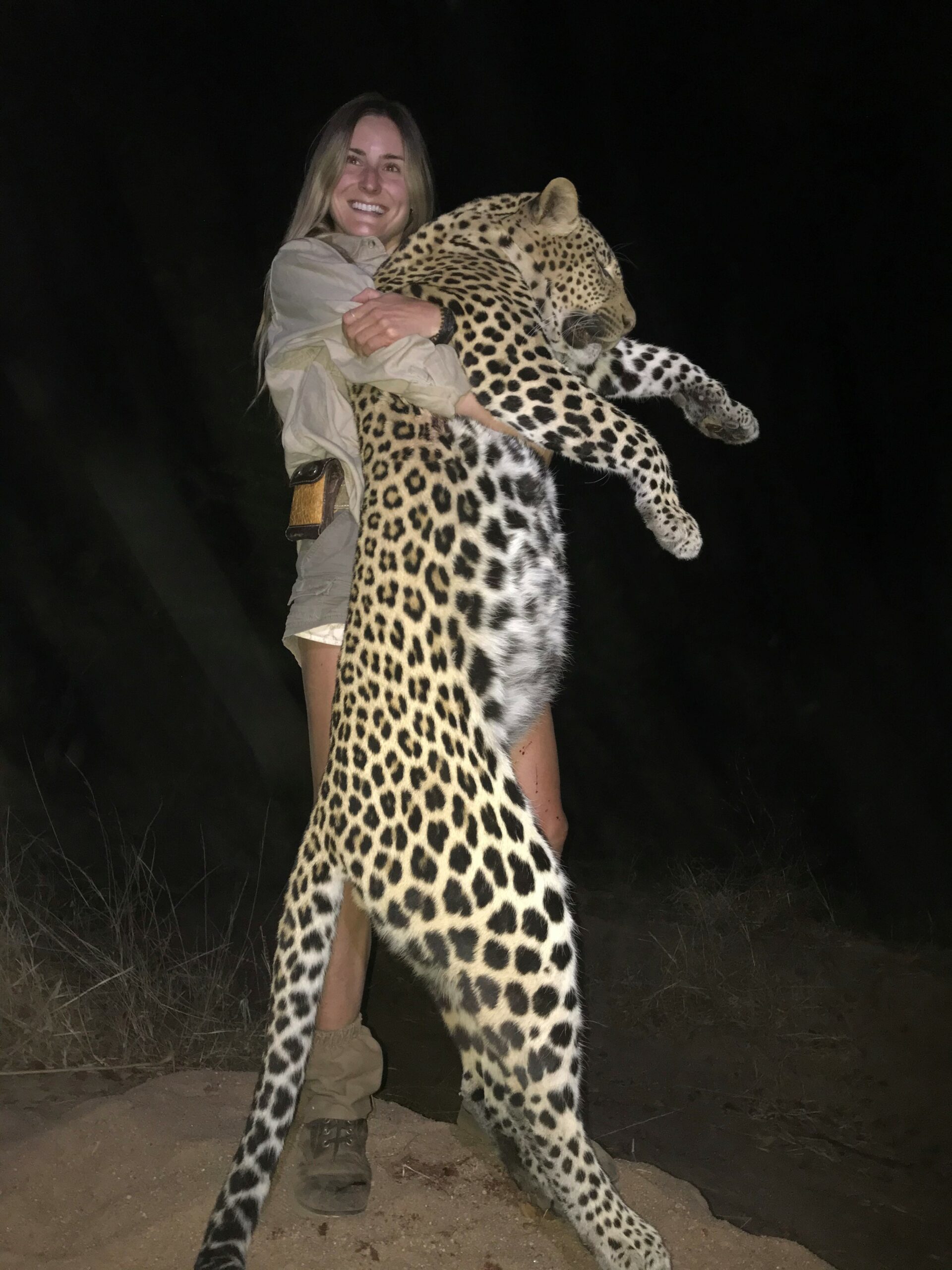 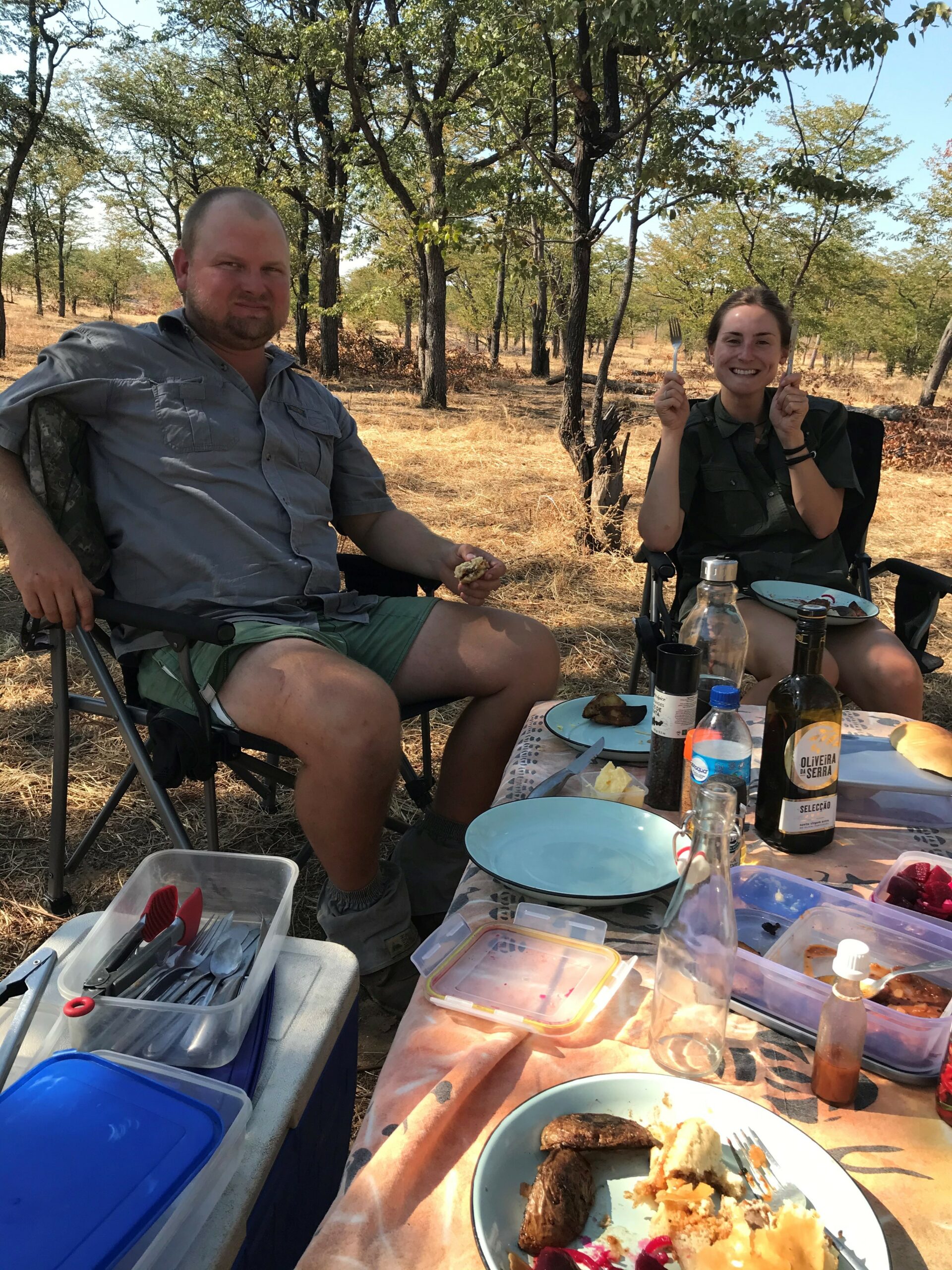 Enjoying a nice bush lunch while out hunting 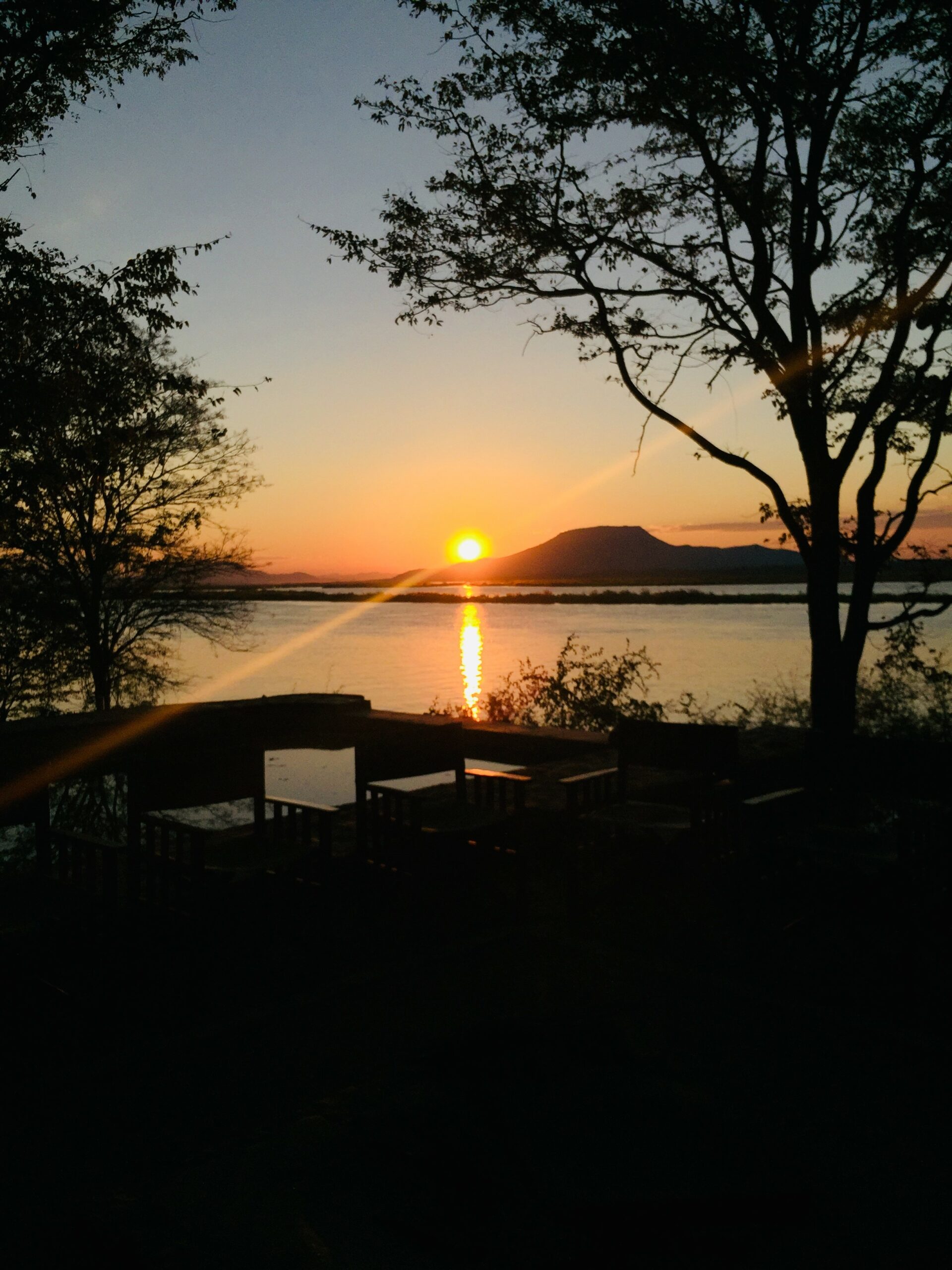 After much searching we were able to find two hippo bulls completely out of the water sunning on a small island. However, they saw us and entered the water, heads bobbing up and down. We were all sitting on the ground glassing, and Brian set up the short sticks and told KK which one to shoot when comfortable. The .375 barked. “Great shot!” said Brian. He had seen the 110 yard shot connect through his binos. A search party was sent out in a dugout canoe to tow in the hippo once it floated, and when near the shore, we used the Land Cruiser to pull the 6,000 lb beast from the water. All the meat was given to the fishing village, and the excited villagers were thankful for fresh protein.

KK had leopard on license, so we set out to shoot several impala rams for bait. At 350 dollars each, that’s some expensive cat food! We hung five baits in likely-looking areas and checked them every day. One bait site was within a mile of camp, and bait number three was heavily fed on with big paw prints around it. We needed a fresh impala bait. A blind was built, and KK and Brian entered it about 4:00 p.m. while I waited in camp.

At 8:30 the driver came to tell me he was sure they had got the leopard, so we headed straight to the blind. Brian and the trackers searched with flashlights. KK and I waied in the blind. Suddenly, “KK come see your leopard,” shouted Brian. WOW! Now everyone was fired up. This had been a fantastic leopard hunt! We had another ‘Dindine’, a cat celebration like none other.

Meantime, a buff ribcage, hide and hooves, a bunch of mummified impala carcasses from leftover recycled leopard baits, and a horrendously rank hippo leg left over from a previous lion safari, were all transformed into croc baits. It took a few days of wiring and chaining these baits in prime spots. The hippo leg was taken to a peninsula, and when we snuck in the following day to check for crocs, some dinosaur had broken the thick wiring and the chain which held the hippo leg! It was a windy day, so we decided to use our boat to search for a big croc. 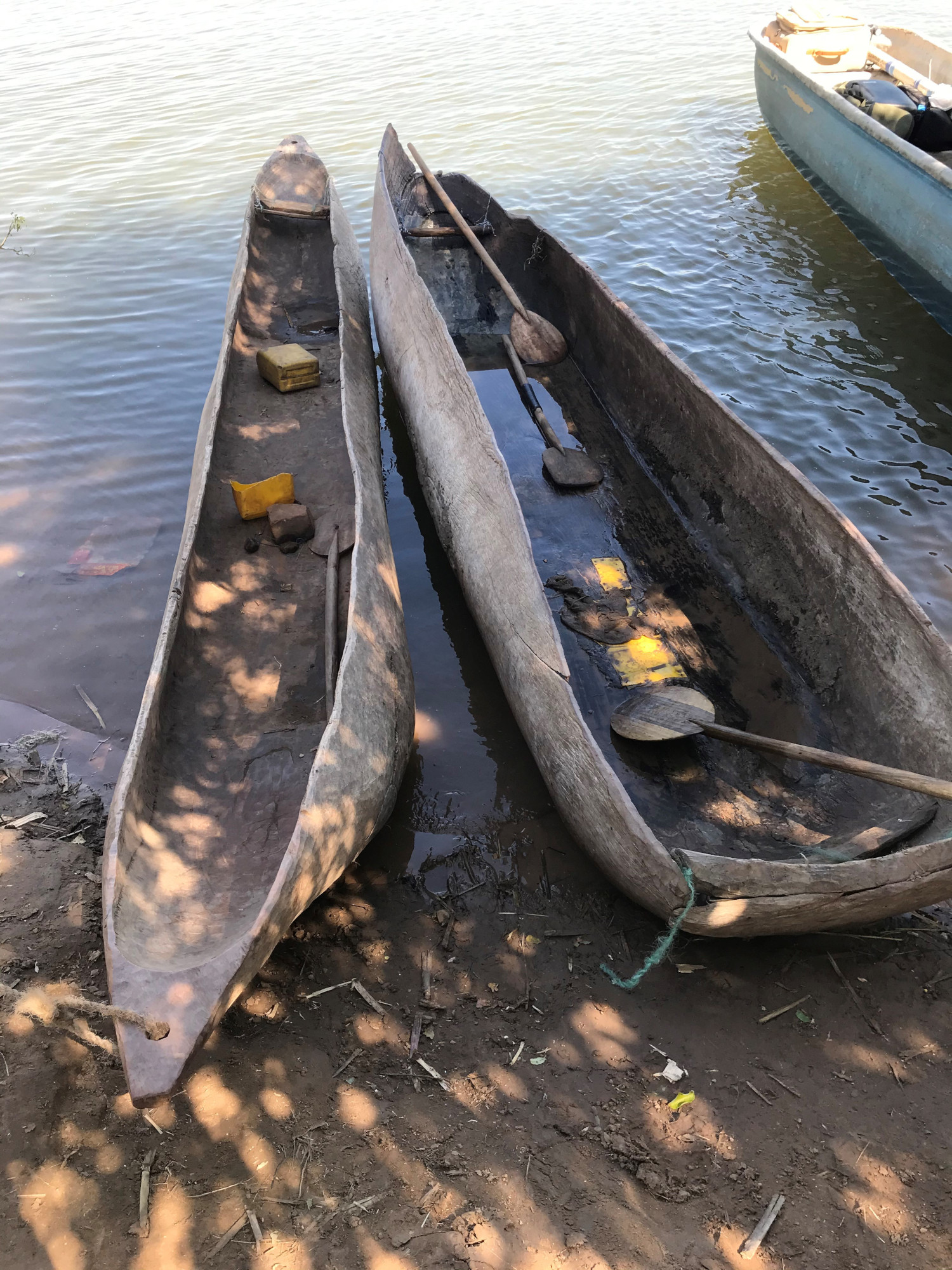 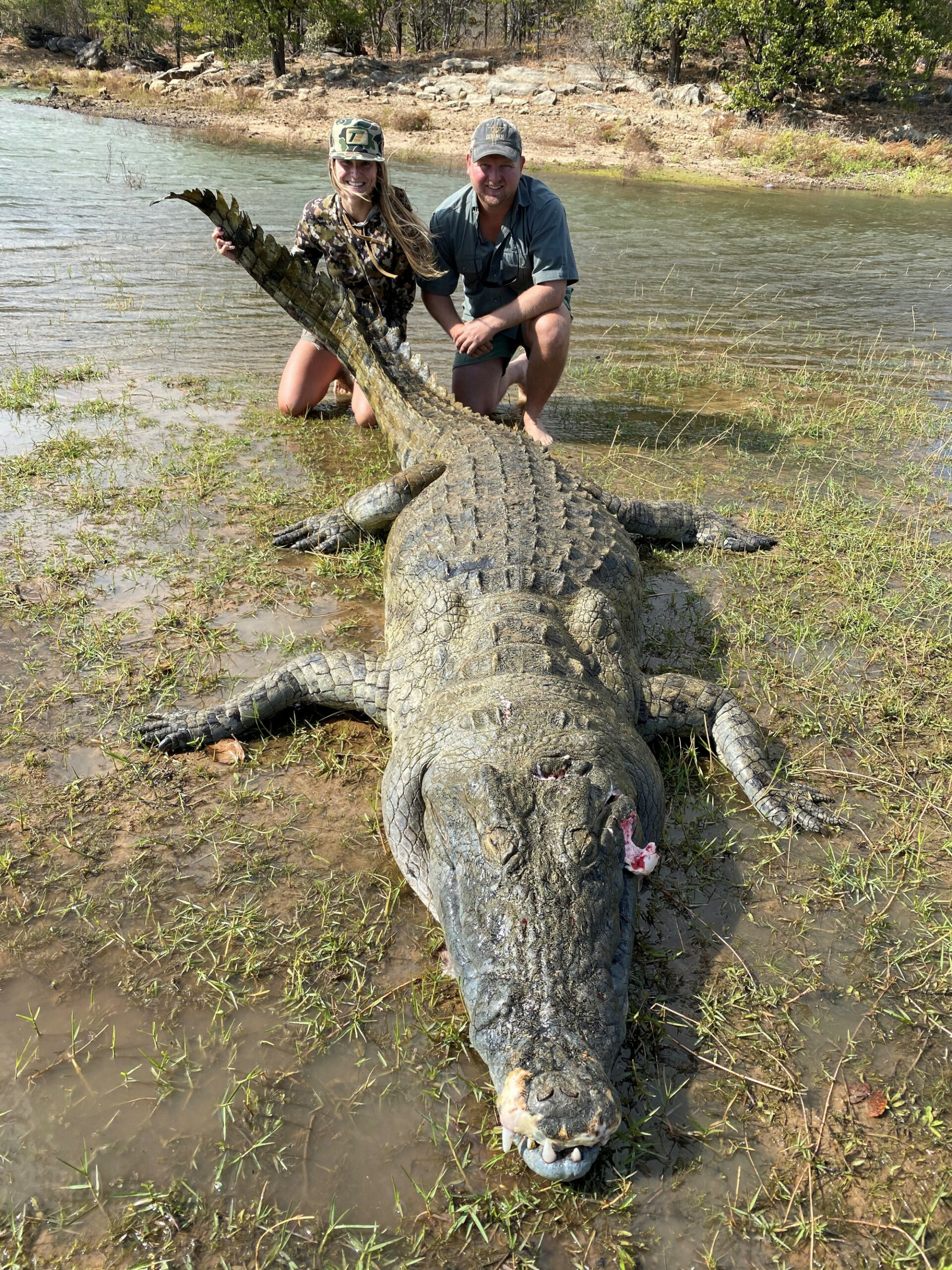 We glassed a lot of shorelines and coves. At one point Brian got out of the boat and walked across a peninsula to take a look at the other side. He came running back to the boat, waving for us to grab the gun and sticks and make it quick! KK and Brian led, then they began belly-crawling for a closer shot. I could see the monster croc lying half in and half out of the water, quartering to the right. He was enormous with a huge head and wide body. Brian had KK on the short sticks and it didn’t take long for the .375 to go off. BOOM! The bullet entered forwards into the back of the skull, and after several insurance shots taken for good measure, it was over.

This was a huge old croc. The dindine celebration would last well into the night. Drinks and cold beers would be flowing! This Second Generation hunt was an especially memorable safari – hunting with Mark Ellement’s son Brian, and Kayleigh.

Those memories will last forever. 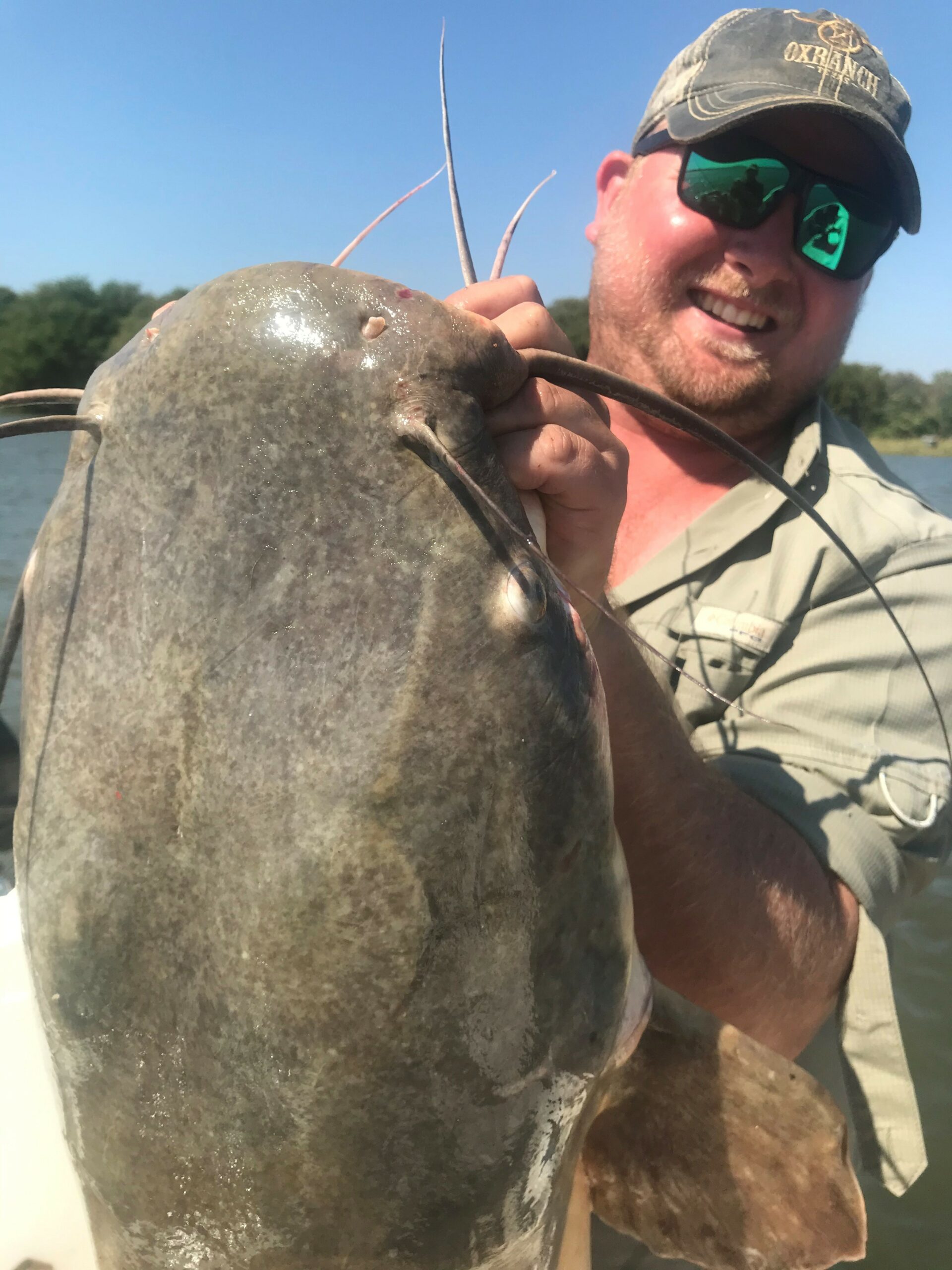 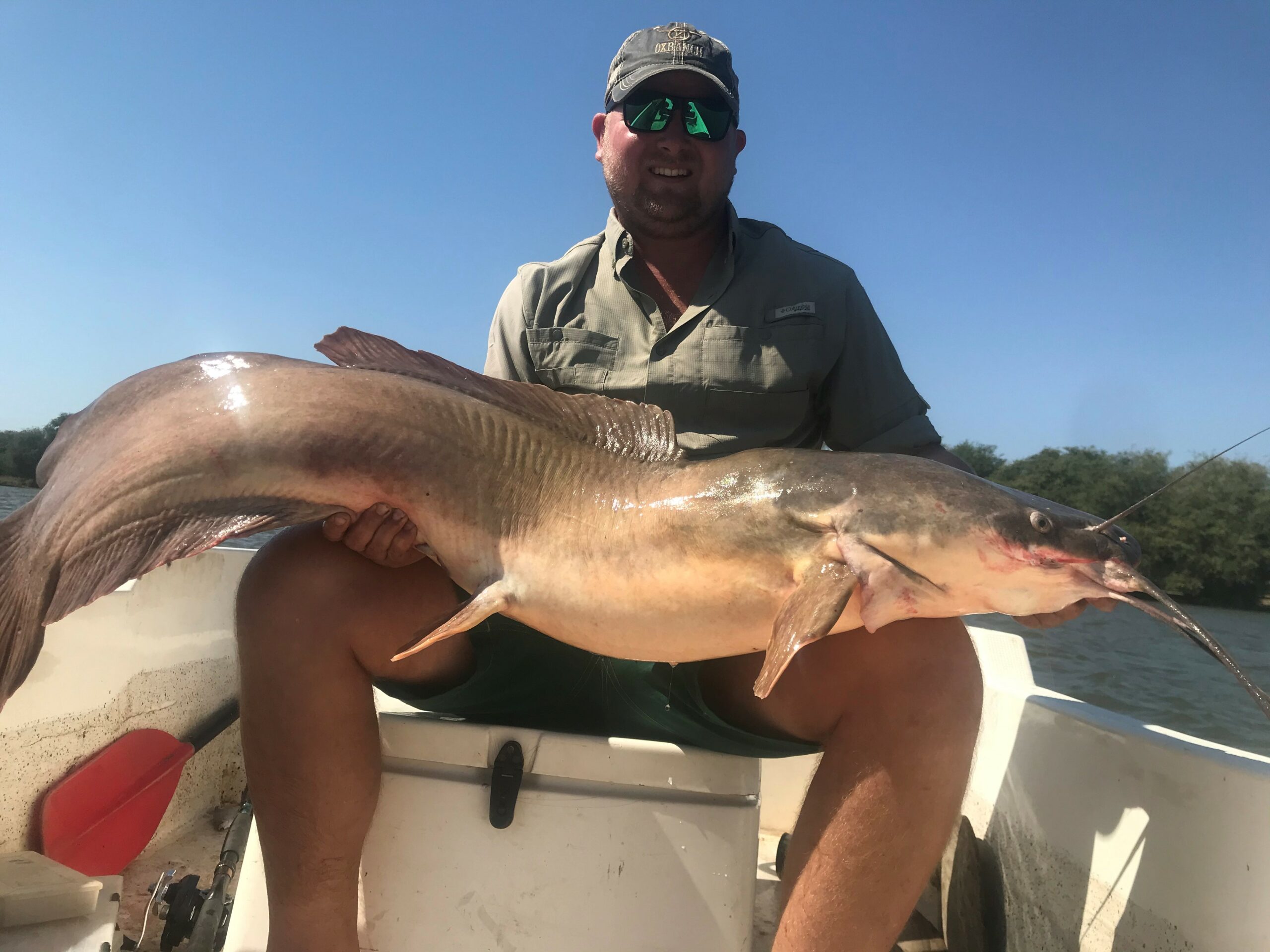 Darby Wright lives in New Braunfels, Texas. After 36 years of owning and running a Fire and Water Damage Restoration Company, he now enjoys his time off hunting and fishing in Costa Rica, Mexico, Australia, Argentina, Canada, Alaska, Zambia, Namibia, South Africa, Zimbabwe and Mozambique. He and his family are always ready for the next adventure. 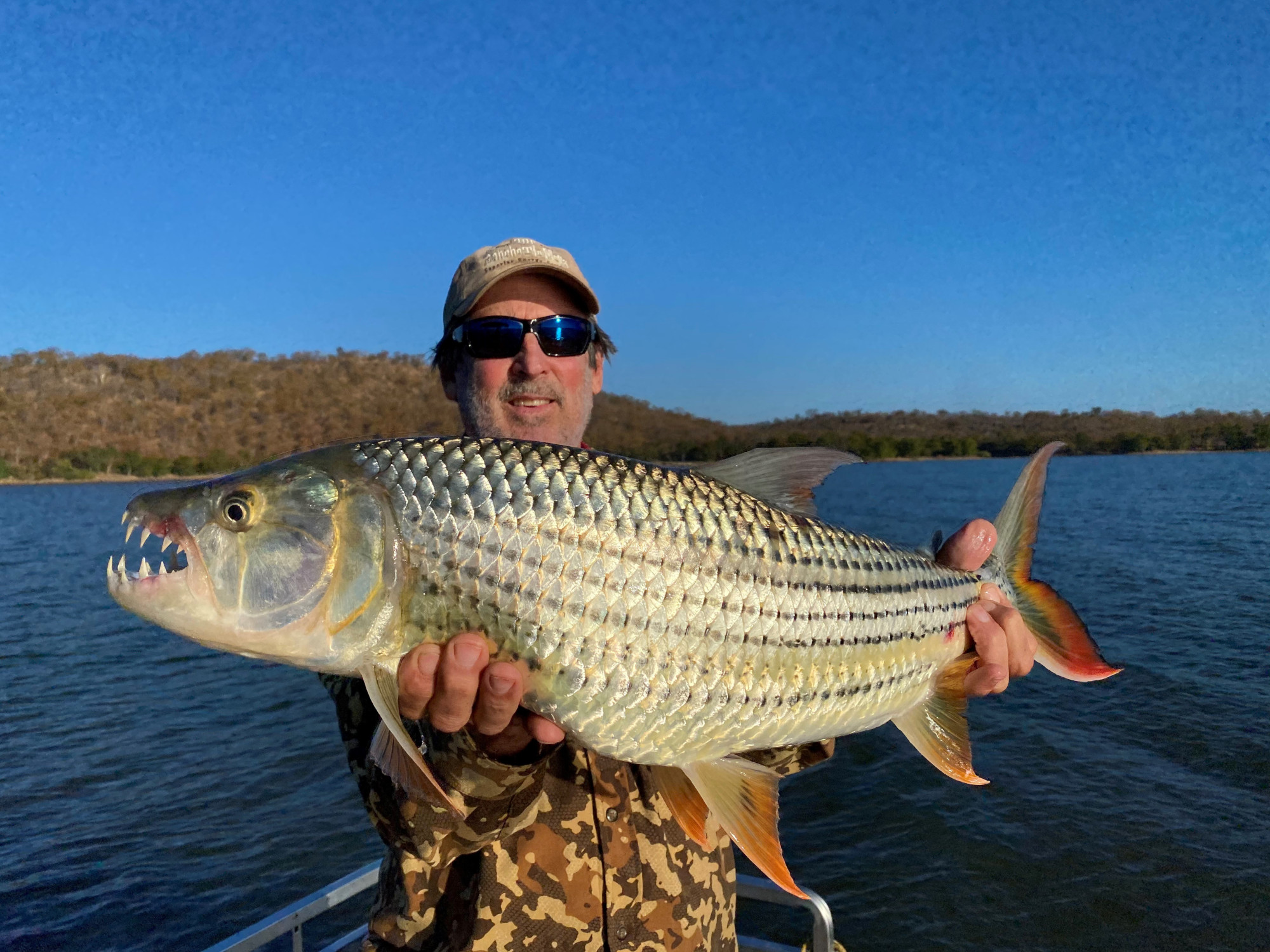