Springbok Slam on a Short Timeline 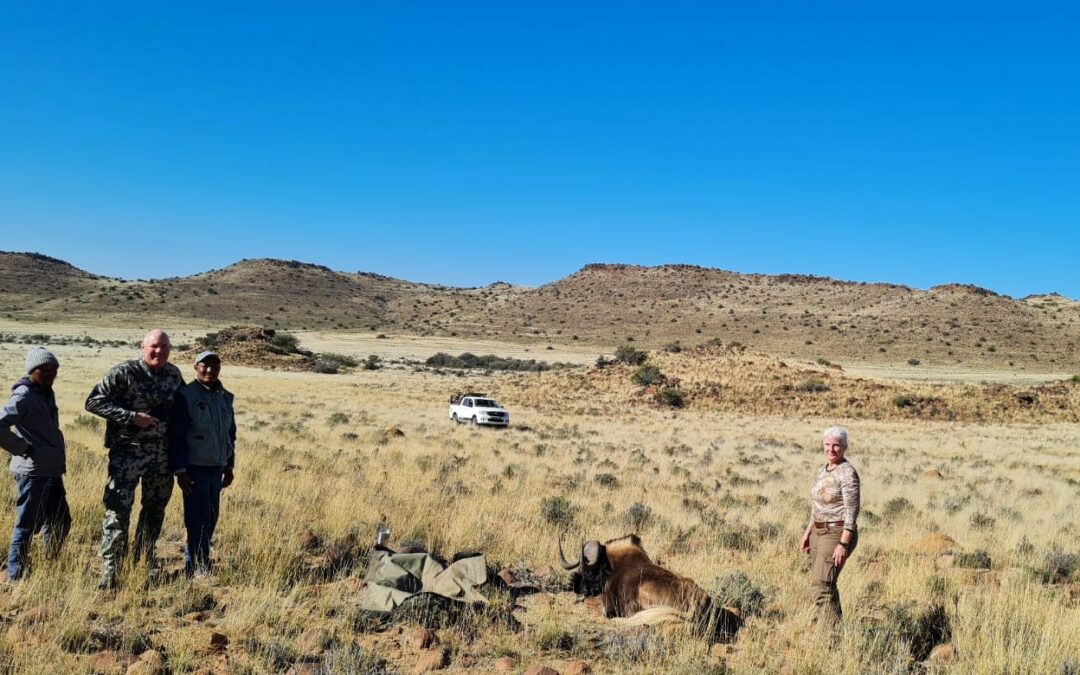 Africa is a place that grows on you. The more I experience Africa, the more I want to return. Planning for my Africa 2022 trip started before I completed a hunt in 2021.

Fast forward a year, I’m in South Africa with my wife, Greeta, and long-time hunting partner, Bruce. After a few days in the Limpopo Province, attempting to add to my Tiny 10 goal by hunting klipspringer and duiker, then seeing the biggest kudu I’ve ever seen in the wild, a 59” brute, my attention turned to the Karoo and the main focus of the safari—springbok.

Concluding the Limpopo portion of our hunt, we left very early in the morning on the fourth day of a seven-day hunt, for the 12-hour overland trip south, in order to arrive as early in the afternoon as possible to get in some hunting time before dark. Two of those seven days were travel days – so hunting time was precious. 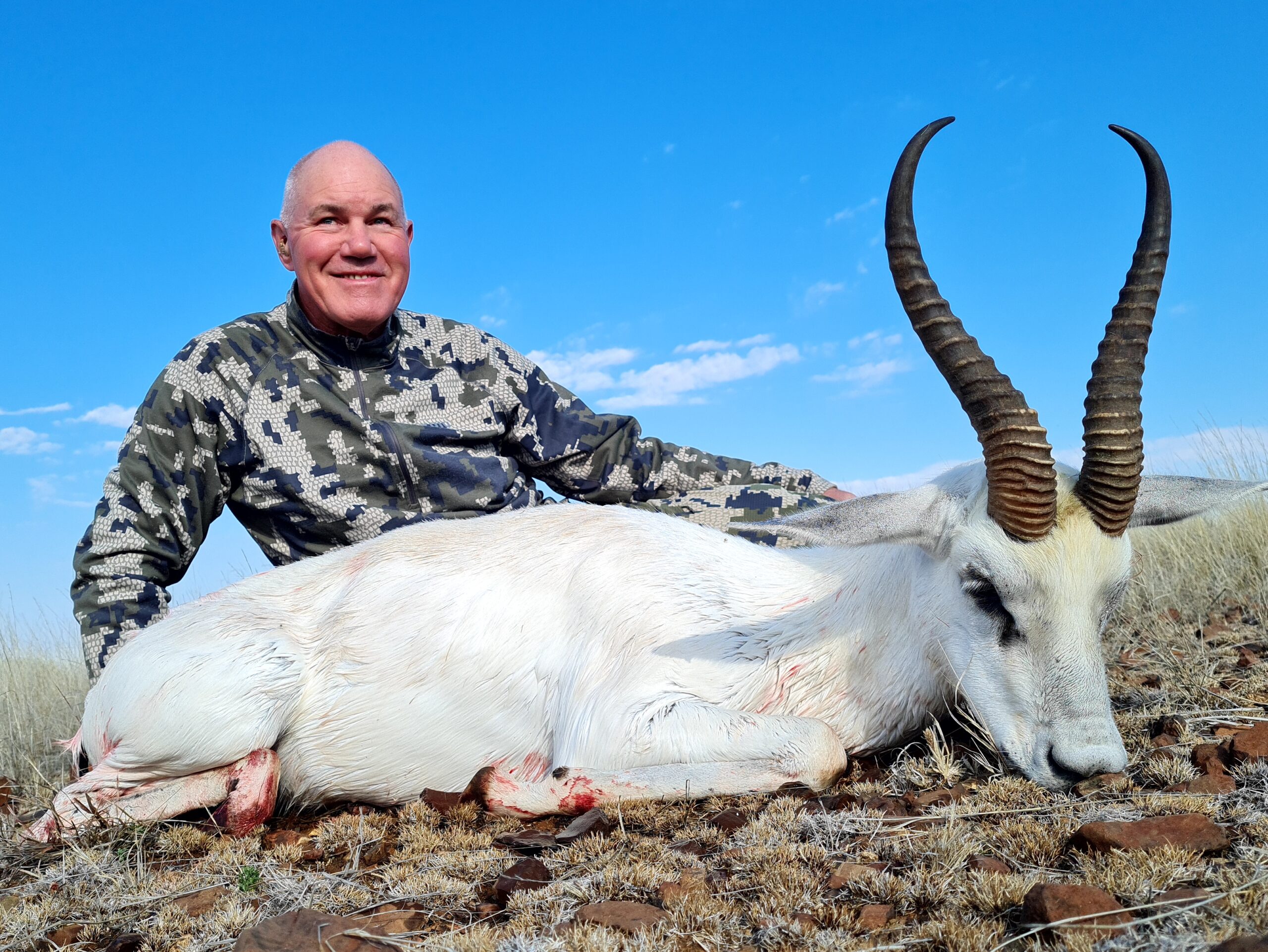 The Great Karoo is a plateau region extending across a vast area and several provinces. It consists of open rolling grasslands interspersed with volcanic hills and the occasional tree; it’s quite different from the Limpopo bushveld. The Karoo is comparable to the landscapes of northeastern New Mexico, where I’ve hunted pronghorn antelope. While the landscapes may look similar, the similarity ends there, as the Karoo offers a far greater amount and variety of wildlife, and is the native range of springbok.

Operating in the Northern Cape Province, Julian (Jules) Theron, known as, “Jules of the Karoo,” owns the Plaatfontein farm, located near the town of De Aar. Jules has spent decades nurturing springbok development, and it shows. Jules’s relatives first came to this area in the 1840s. Now, five and six generations later, he and his son Izak continue the family’s commitment to the Karoo and springbok. There are an estimated 30,000 Springbok on Plaatfontein’s roughly 300,000 acres, making for good opportunity to see springbok without having to spend days locating animals.

The objective in the Karoo for both Bruce and me was to obtain Springbok Grand Slams. I trusted Numzaan Safaris and Jules of the Karoo would help make my dream a reality. That trust proved to be well placed.

A Springbok Grand Slam (“slam” hereafter) consists of the four colors variations of this species, the common, copper, white, and the smallest and more rare, black springbok. There are herds of common springbok only, but often we encountered mixed herds, some with all four colors.

A big plus for the hunt was our local tracker’s incredible eyesight accompanied by very good optics. In reality, he should be called an expert spotter, rather than a tracker. 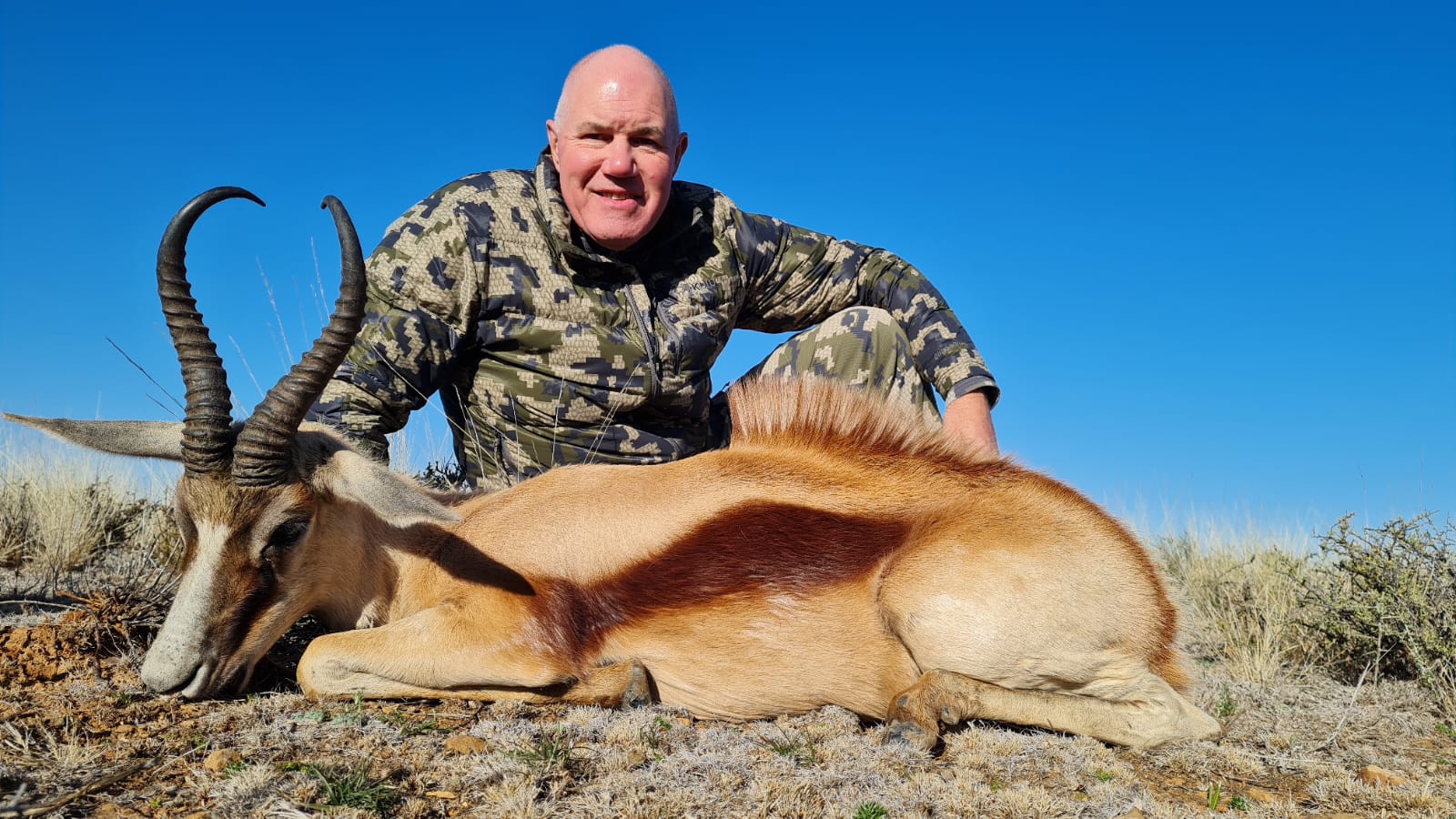 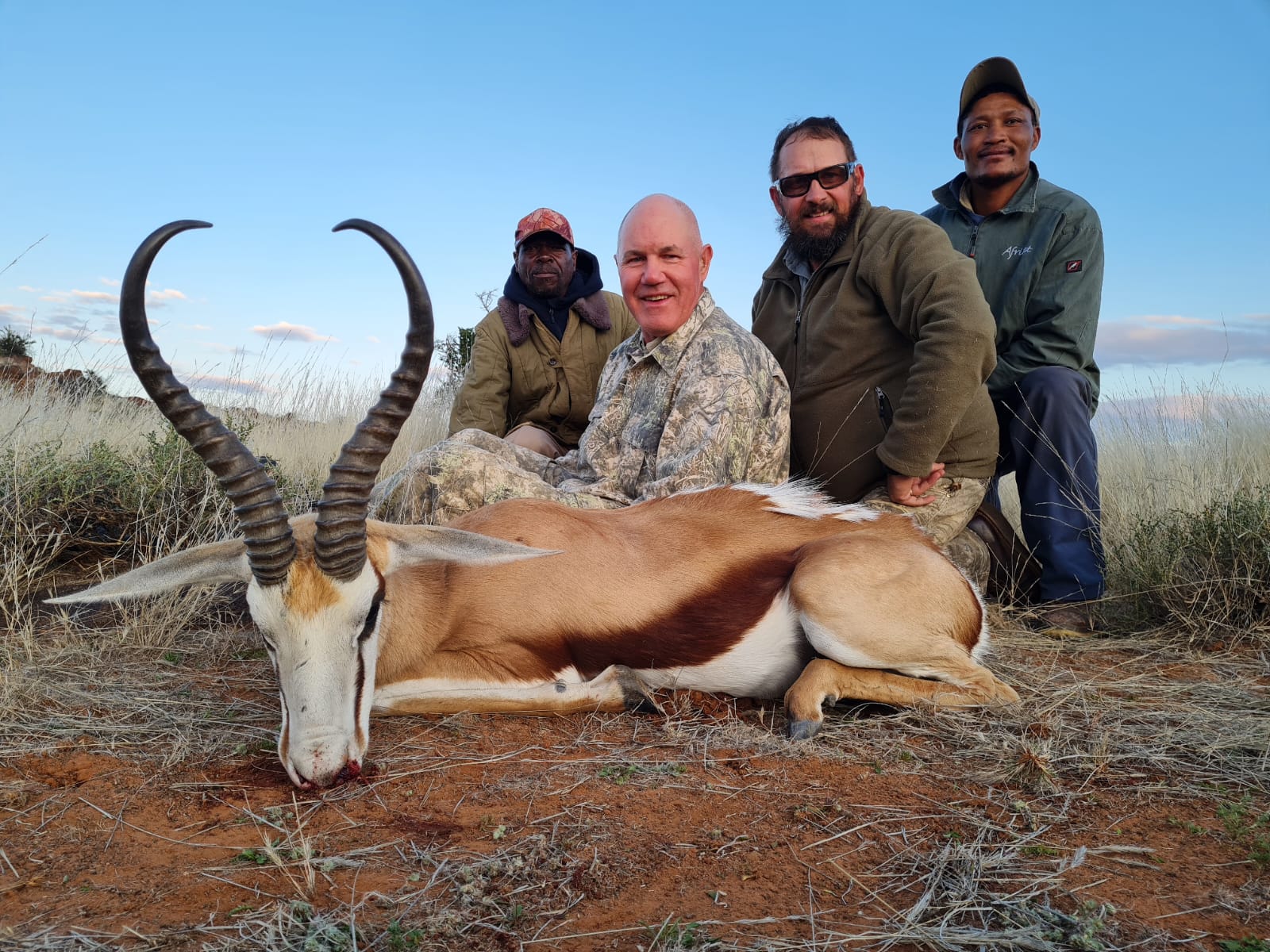 With minimal cover, our stalks had to be well-planned. We found the springbok’s comfort zone was generally 250 to 300 yards.

We had less than three days to hunt. It’s recommended that five to seven days be allocated for the pursuit of a quality springbok slam, but we just didn’t have that luxury. One could complete a slam in a day, and some people have done so, but to secure large-horned trophies typically requires more time.

Simultaneously, after finding a small herd with a good common ram, Arnold Cloete, my PH, and I stalked slowly using a lone tree as cover. We got within 300 yards, but needed to get to a better shooting location. Leaving our tracker at the tree, we walked together in the open.

“Bend 90 degrees at your hips and grab my belt to stay immediately behind me,” he requested. “We’ll appear as a four-legged animal.” He held his shooting sticks high as we walked to simulate gemsbok horns.

We made our way to a rock outcropping without disturbing the grazing herd, putting us in position to connect with the common springbok ram. I assumed the ram we were seeing was a representative animal for the species. That assumption was later corrected when Arnold put a tape to his horns; they measured just under 17 inches in length.

Common springbok are the most frequently seen and were the originating sub-species for the other springbok types. They also have the largest body and horn size.  Trophy pricing for the common springbok is generally in graduated cost as the horn length exceeds 14 inches. Rams larger than 17 inches are rare.  At the Theron Lodge we did see horns that measured close to 20 inches— those are exceptional horns!

The next morning Bruce completed his slam, having obtained a very nice assemblage of rams. Arnold wanted to begin the day looking for a respectable black ram, knowing that it might take time to locate, but we quickly shifted our attention to a white ram the tracker spotted in a distant pasture.  After shooting high, the ram moved off, requiring a short pursuit in the truck.  A follow-up shot and we had our second ram.

Shortly thereafter, good fortune was with us, and we found a large black ram. A quick stalk, and two rams were headed to the skinning shed. With these successes, the pressure was easing for getting my slam. 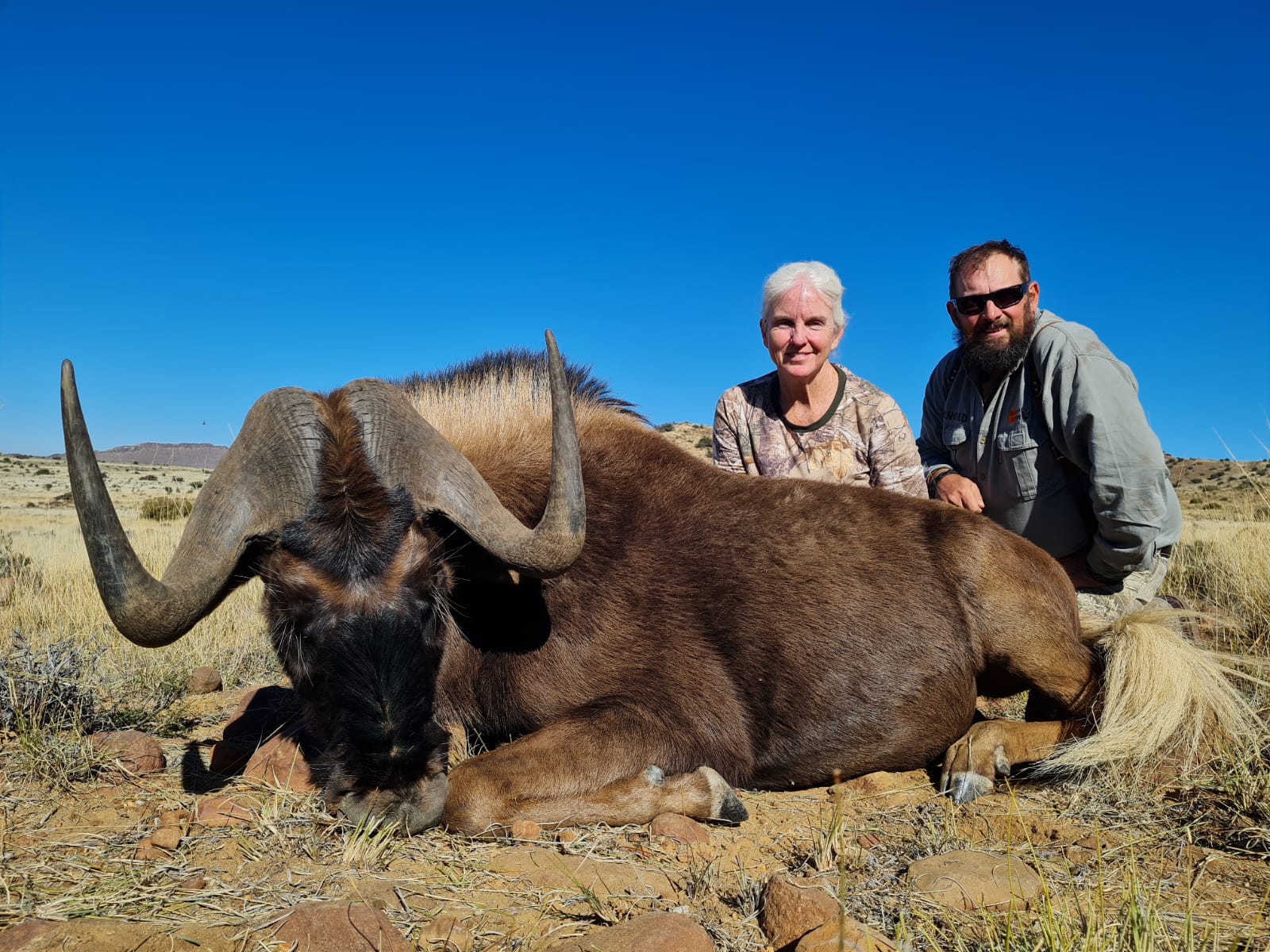 We started the day intending to hunt springbok all day, but our plans changed at lunch as management wanted us to turn our attention to pursuing black wildebeest, given the coordination of hunters. That gave me a chance to relax a little, as it was now my wife’s turn to be the hunter.

Greeta was hunting for the first time in Africa and was seeking a black wildebeest to continue moving our trophy collection towards the “Beest” Grand Slam completion. She had already taken her first Africa animal in Limpopo, a common blesbok.

After arriving to an area where black wildebeest have existed in their natural range for millennia, we glassed several lone bulls, and a short stalk ensued. While Greeta lined up vertically on the front leg, as instructed by Arnold, her shot was low and carved a light groove in his leg. What are the chances of a grazing shot that does not draw blood and only shaves off the hair? The way the animal reacted, Arnold thought it had been hit. But subsequent groundwork and glassing of the bull did not reveal any blood.  It was only later we would discover the groove in the hair.

Now spooked, those bulls joined a small herd of cows, circled around a small mountain, and headed over a shallow pass. Greeta and Arnold attempted a second stalk, but with disturbed animals, they couldn’t close the gap to a reasonable shooting distance before dark set in.

The focus of the morning on the final day of our hunt in the Karoo was to find a copper springbok. Arnold’s plan included a lunch away from the lodge to allow maximum time to get a copper and then get back on wildebeest.

Mornings are cool to cold on the Karoo in July; it’s the southern hemisphere’s winter. This particular dawn we had frost on windshields, and fog. In fact, the fog was so thick we had to delay getting into the field over an hour past the normal starting time.

Once afield, with the fog gradually burning off, we spotted several copper springbok in a mixed herd. We were facing into the sun and maneuvered to approach them from the east. As we moved into position they were gone. Springbok can run very fast, and this group, possibly spooked by our movement or a wind shift, had vanished. 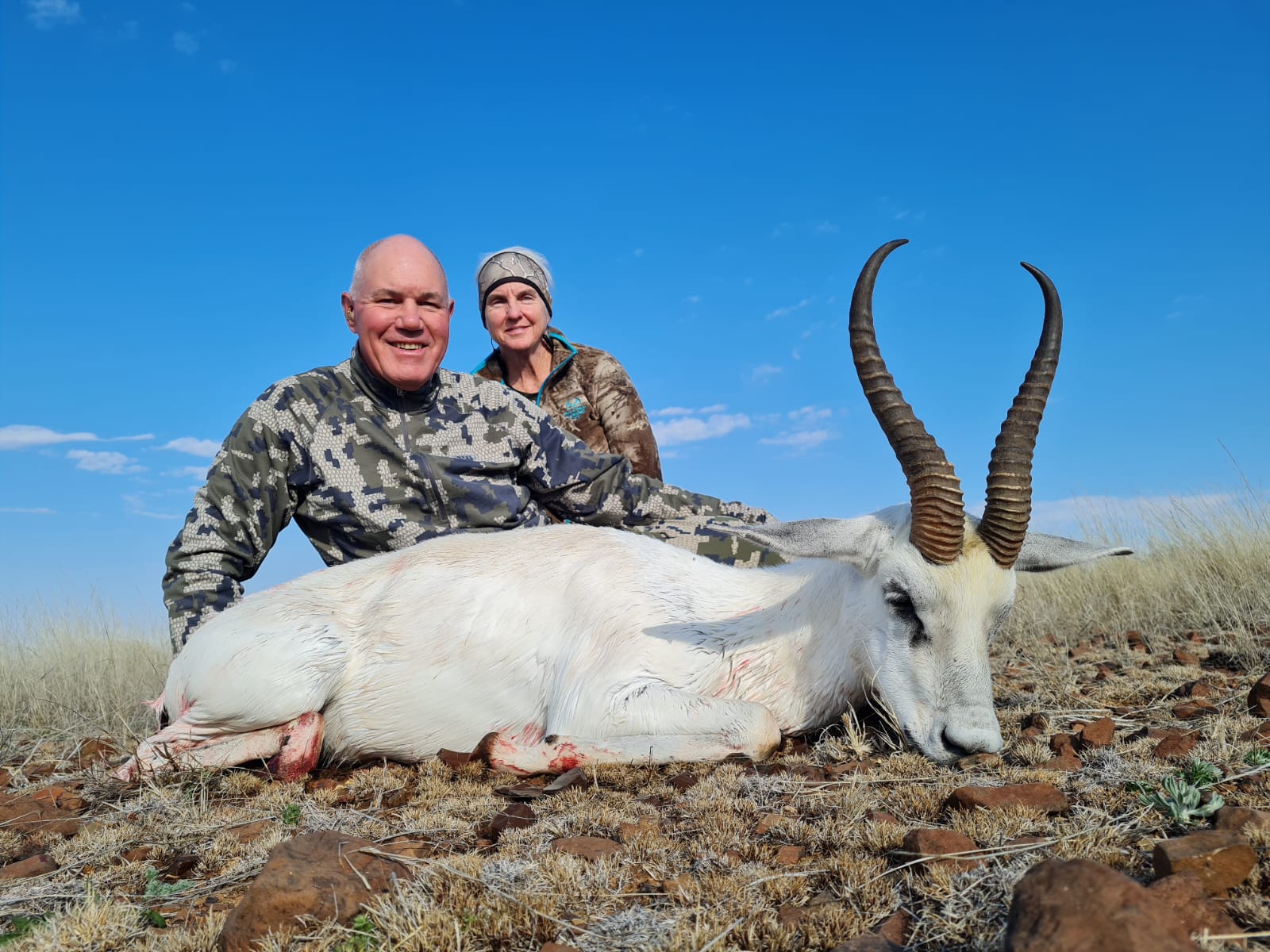 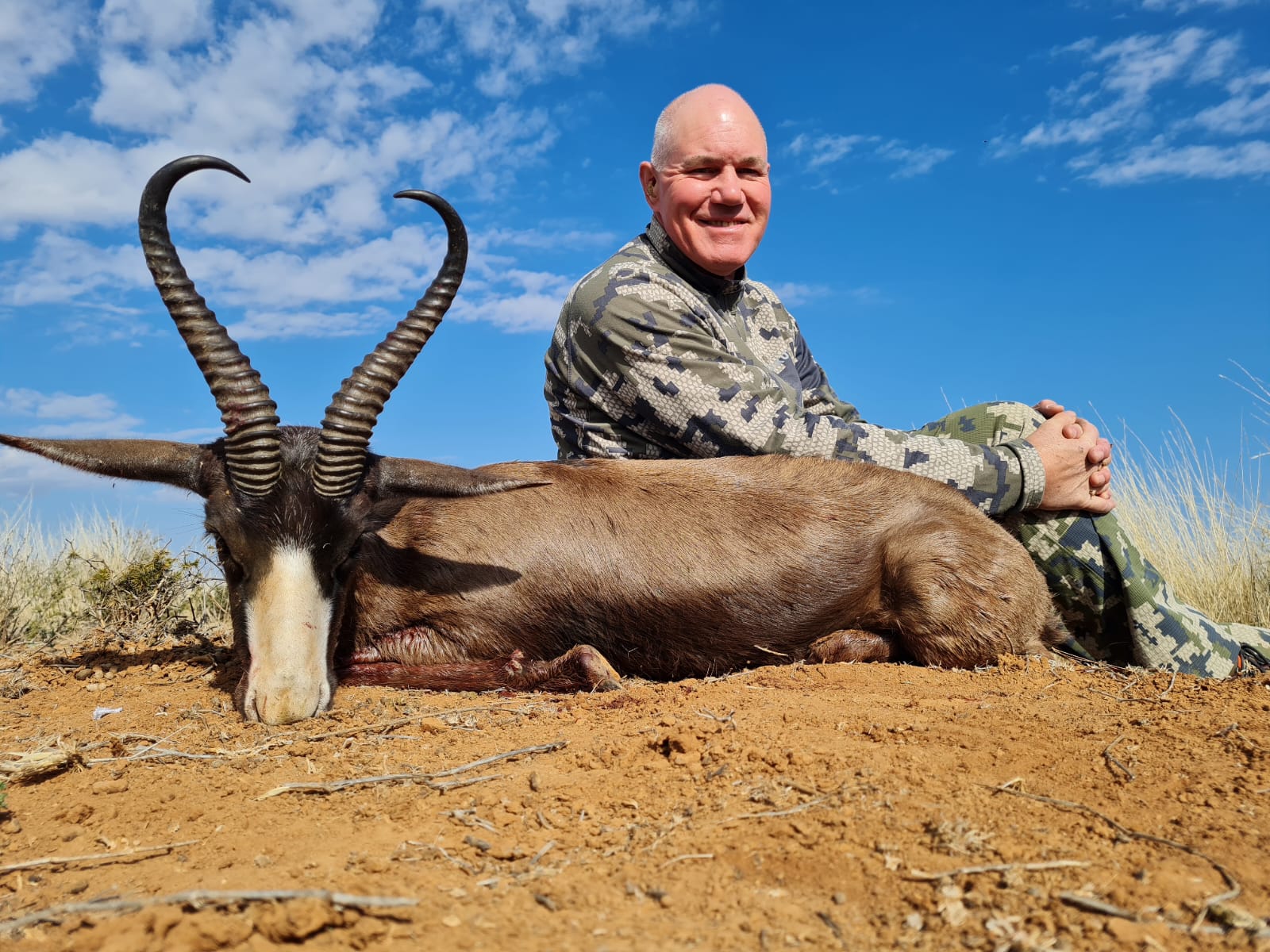 A little later a reasonable copper ram moved to within shooting distance. With the foggy overcast and the soft light, I questioned if it was a copper or a common. I was firmly told, “Remember Rule #1 and shoot.” My slam was completed.

Rule #1—trust & obey the PH—had come up at the beginning of the hunt, in Limpopo. After Greeta and I tuned in our rifles, Arnold sighted-in his .223, in addition to his heavy backup gun. I found that odd. He told me the first day in the field that my rifle was too much for the pygmy antelope, but perfect for springbok shot at longer distances. I had taken a RW record steenbok the prior year with that same rifle at short range and dismissed his comment.

He must have talked with Johan, the camp manager, as the correct calibers for various game was the topic of discussion at supper that night. Johan convinced me that hunting klipspringer and duiker with a smaller caliber was the correct thing to do. Now I understood why the .223 had come along on the hunt. Arnold was thinking ahead, knowing what caliber I was bringing to this safari. After making the decision to use his .223 for pygmy antelope, he reminded me of Rule #1. While it carried a serious tone, it became a running joke between us the subsequent few times I questioned what was going on.

Having completed my springbok slam, the day’s hunt plan was holding. We dropped the ram for skinning, then headed southwest for black wildebeest. We anticipated correctly that the herd would remain in the hilly area where we’d left them the evening before. True to form, our tracker sighted a herd first, several miles away. The herd included the bull Greeta had shot at the previous afternoon. The tracker, Arnold and Greeta set off on what would turn out to be a very careful two-hour stalk. With a little tree cover, they slowly worked their way along a depression that closed roughly a third of the gap to the herd, moved to a hill and then carefully moved again, further east to another smaller hill.

The herd had shifted during the stalk to the side of small mountain, unaware of the approaching hunters. The three stalkers remained out of sight and closely watched the wind, which remained favorable the entire stalk; they gradually closed to within 150 yards.

Arnold positioned her on a perfectly placed flat rock on that small hill, giving her a solid shooting platform. After the shot, Arnold summoned us on the radio with the good news and a request to bring the truck as close as possible in that rocky terrain. His plan had been executed perfectly and we completed our Karoo hunt with four hours to spare. What a relief!

Three of the four rams have larger-than-average to exceptional horn lengths and could score SCI Gold. My slam was completed in under two full hunting days. This is not the norm, and serves as a tribute to the tracker employed by Jules and Izak, and to Arnold’s excellent PH and people skills, a team effort for which I am very appreciative. The lesson? When on a tight timeline, the right team at the right place is critical.