Stuck in the Mud 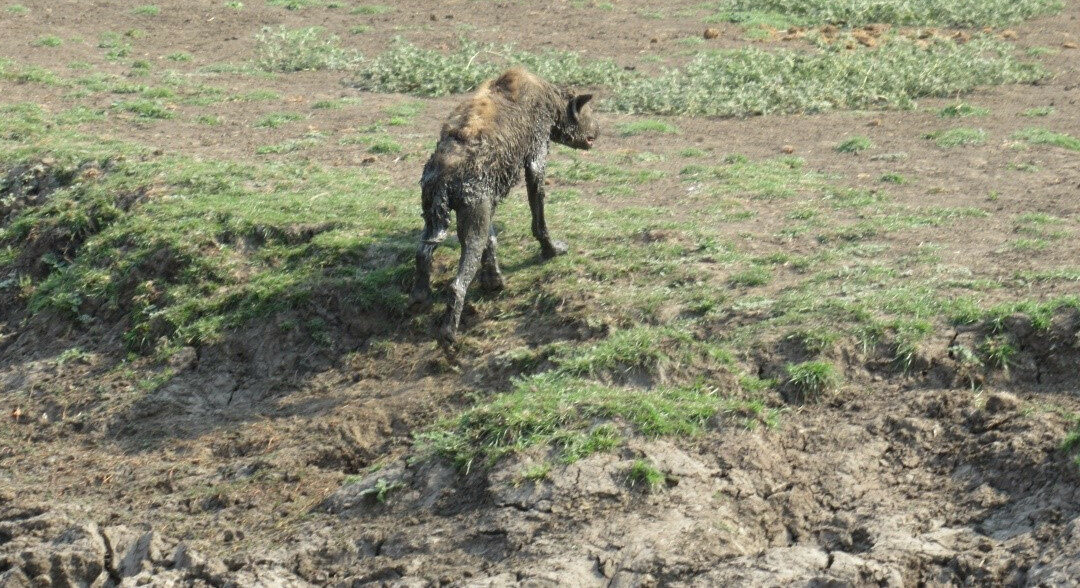 Our 2019 safari had a vastly different feel for me – it was my first since I had officially retired from fulltime employment. I had worked for 38 years straight, and our first day in Zambia was just two months after I retired, and being back in Zambia was just what the doctor ordered and really helped me put my employed life behind me. I also stopped shaving – a retirement statement of sorts – but by the end of the trip I knew the rabbinical look was not for me!

This was our third trip to the Lower Lupande in the Luangwa Valley and our fifth safari with Peter Chipman and Kwalata Safaris – I felt as if I were going to my second home, albeit in a different room in the house. This year, we stayed at the main camp on Bwana Peter’s concession, closer to the airport and equidistant between the primary hunting areas.

Mac was back with us – always a special treat for me to be on safari with my youngest son. This year I was the one who was carefree and chatty, and Mac was the overworked stiff who passed out every night before his head hit the pillow – so funny how one day you become your father and the next your son becomes you – a reminder that life is short and must be lived!

The only reservation I had coming into this trip was my bum foot. Two months previously I was walking in a boot and on meds for the pain. My condition is a permanent one – it is a matter correct footwear and pain management. At the time I arrived in Zambia I was out of the boot, though my mobility was limited, and the pain was constant. Bwana Peter must have had a premonition as he had chosen as a PH, Abie du Plooy, whose mobility was more restricted than mine – together we were quite the pair. The Land Cruiser would have to be on fire for us to want to get out of it to hunt! But of course we did get out for our stalks.

Abie du Plooy was one of those rare and special people. There are few Abies left on this Earth – he was a real throwback to an early period of African safari hunting. He knew all the legends of the craft, and he had seen and done it all. His mind was still sharp, but his body showed the wear. His language was unfiltered which, at times, reminded me of my early days on the New York trading floor. He also was color blind in the way he approached people. While he treated people according to their functional safari role (operator, PH, client, Jr PH, tracker, scout, camp staff, etc.), he treated everyone the same – as people. Perhaps the junior PH, Kevin might reject this statement, but he was a trainee and devoid of rights. The stories Abie shared with his trackers and the laughs they all had together were gut-bustingly funny and everyone laughed together. Abie was white; his second wife was black, and they had a daughter together along with many other children from their previous marriages and many adoptions. Abie would talk to his wife and young daughter almost daily. We learned much about his family on the trip. So, while his language was rough, and his exterior worn – he was a kind man who seemed to love all people. Abie was good to Mac – more of a teacher than a PH. Mac and I are richer for the experience of hunting with Abie du Plooy. About a year after returning from Zambia, we got word that Abie had passed away. Mac and I were deeply saddened – yet we felt lucky to have known him.

The author (L) with Abie du Plooy – he will be missed by many.

Day 7 of our safari was one of exploration. We set out to the far end of the concession to look for bushbuck for Mac and to check out the Luangwa for crocs – I was open-minded to taking another croc if we could find a monster- 14-footer or better. We travelled down the familiar main road: we passed “Ellie Alley”, passed the school, passed the Scout Training Camp all the way to the border of Kwalata’s concession. Bwana had warned us that an illegal outfitter had set up on the outskirts of our concession and was hosting naturalist safaris. How crazy was this, on a hunting concession? We were hunting where there were birdwatchers! Bwana was wrangling with him and the local authorities; however, at the time Bwana told us that he did not mind if we hunted where the rogue outfitter had set up camp, but clearly to be careful. (A reminder that hunting with a reputable outfitter is paramount.)

We took a right off the main road to work the brush for bushbuck and make our way down towards the river. Then an open expanse of land showed many puku and waterbuck feeding in the grass. We had already taken one puku on this trip and Mac was not interested in another unless we saw a seriously big one. Across the grass, we could see a Land Cruiser with the nature-lovers were glassing something in the bush near their makeshift camp. They could have been in danger if we had decided to take aim at one of the pukus, and Abie sent one of the trackers to speak to the naturalists and ask what they were doing on the hunting concession. Our Land Cruiser was still in the brush on a small road and out of their sight. While we were waiting for our tracker to return, several of us got off the Land Cruiser for a “bathroom break” and then saw a small group of elephants ahead in the road. Abie was closest to them and started to yell and wave his arms to ward them off. This was some sight, as Abie was relieving himself, not bothered by the elephants. Priorities!

Meantime, the naturalists’ Land Cruiser drove off, our tracker returned, and we continued towards the river. A couple of hundred yards further we saw two local villagers walking our way signaling to us, and we drove to meet them. They told our trackers that there was a hyena ahead of us stuck in the mud – they had tried to help it, but could not. They pointed where to go, and we drove on. Sure enough, we found the hyena that was not only stuck, but looked near death from exhaustion. All four legs were buried in the mud, and the mud was drying in the hot sun, effectively condemning it to a cruel death. Abie and the trackers discussed how to approach it. I must confess I was thinking to myself that Mother Nature does things for a reason. I was skeptical as to how they were going to get close enough without putting themselves in harm’s way – we all know the power of a hyena’s jaws, exhausted or not.

Abie and the trackers seemed unperturbed by the potential danger – instead, they took a rope from the back of the Land Cruiser and approached the bank of the drying stream where the hyena was stuck. The stream ran across the large open area draining into the river, though at this time of year most of the stream was now small pools of water, mud, or dried mud to be more accurate. From the bank of the stream, the guide threw a thick, synthetic rope onto the hyena which instantly bit into it and started gnawing it. Before the guide could pull on the rope, the hyena had severed the rope in two.

Ok – new plan. This time the guide threw the rope onto the hyena and immediately started to pull the rope. As the hyena bit on the rope there was immediate tension on it, and as the guide started to pull, the hyena slowly started to dislodge from the mud. I must admit, I was shocked to see how the plan was working. Then I started to worry again. What if the guide was successful and hyena came after him? Murphy’s Law ensued. The freed hyena, instead of chasing toward the guide as I thought, turned back towards where he had been stuck, and found himself trapped in the mud again. Not discouraged, the trackers threw the rope again to the hyena, this time pulling it towards dried mud and, as planned, it found solid ground and walked up the far bank of the stream onto the open grassy area and started to walk away from the stream. It was walking towards the bush where the birdwatchers were glassing! And at that point neither the hyena nor we knew what was lying in the brush – we found out later that a lion had been there, though we do not know if the hyena encountered it or not.

Look how close the guide’s hand is to the hyena’s mouth!

The hyena got with the program and allowed the guide to pull him out.

Free at last! The hyena was truly exhausted and did not know it was walking towards potential danger – a lion further on in the grass.

After we left the hyena, Abie wanted to take a drive along the river to drive by the illegal outfitter’s makeshift camp. He just wanted to remind him he was on a hunting concession. Abie also wanted them to see us – Abie loved to stir the pot. We said it would be fun to be a fly on the wall and hear the dinner conversation at that camp that night – whose concession, was it after all?

For Mac and me, saving the hyena was a rewarding experience – to be clear, we were just spectators and admittedly, I was initially the doubter. One should never underestimate your PH and trackers. They are resourceful and know how to problem solve. Abie Du Plooy was both experienced and knew it was his duty to save an animal’s life. One cannot forget that hunting safari operators are conservationists first and foremost. Last, and most profoundly – while the hyena was not doomed to die in the mud that morning, it left us and was heading towards a resting lion concealed in the brush. Life in the bush is harsh, and death is never far away.

Abie – we wanted to thank you again for a memorable safari – Mac and I are better people and better hunters for knowing you. May you rest in peace.