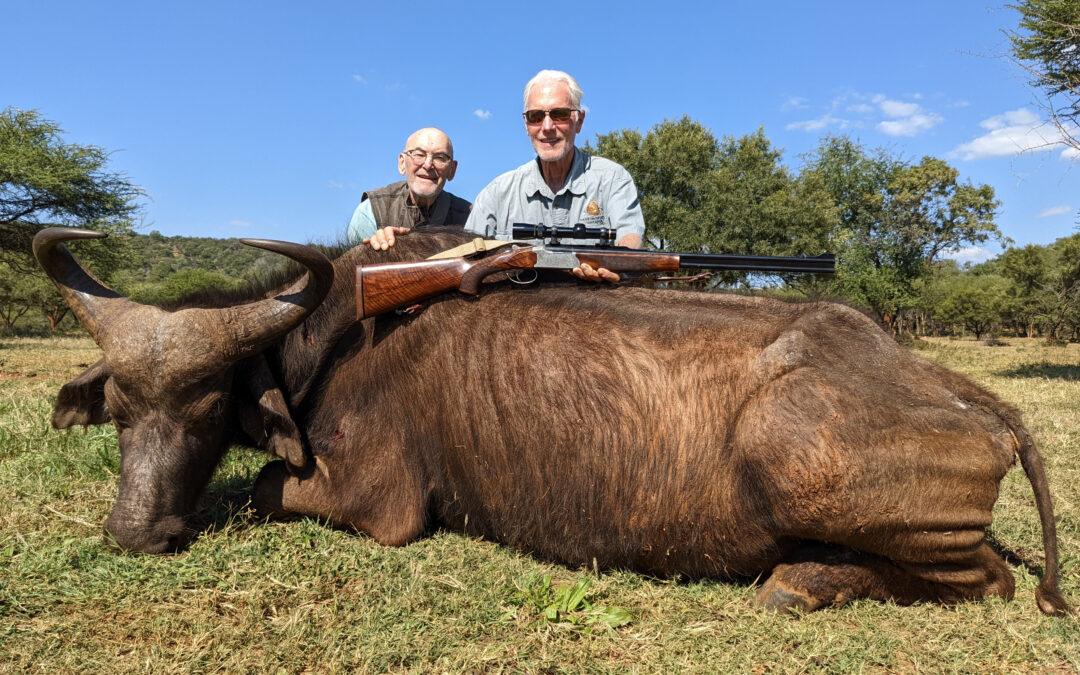 I know, this sounds like an African wreck waiting to happen. When long-time hunting buddy Jim Gefroh and I sat down with Jacques Senekal, owner of African Maximum Safaris in the North West Province of South Africa, and laid our hunting parameters, things did get worse, at least for him.

“Hi Jacques, great to finally be here. Jim and I have a few things you should know. Well, Jim is kinda hard of hearing, not bad, but you have to speak up a bit, even when standing next to him. Oh, and my eyesight isn’t what it used to be, especially in low light conditions. But we figure between the two of us you’ve got one pretty seasoned hunter.”

Jacque smiled weakly and shifted slightly in his seat.

And, just so there are no surprises, we have a self-imposed maximum shooting distance of 50 yards. We won’t shoot unless we have a perfect broadside shot on a buffalo, no moving targets. We’ve agreed that unless a scenario is perfect, we won’t take the shot. We would rather go home without shooting a buffalo than mess things up. Oh yeah, and I’m allergic to chocolate.”

After a quick change of clothes, we headed to the shooting range with professional hunters T.J. and Arri. They kindly accommodated us by setting up a target at 50 yards. Our trackers, Medina and Songas, as well as a group of curious onlookers were there to see how the old guys would do.

Jim was spot on as usual. His .500 Nitro Express, built by Varney Caron for Griffin and Howie, was a tack driver. He consistently drove 570-grain bullets into the center, a 6×6 square in the middle of the target. My turn. After six shots I finally got on the larger, 12×12 paper target.

Our (my credibility) dropped like a Victorian window-weight. The silence behind me said it all, and I know that T.J. and Arri were thinking, what every PH thinks when witnessing an incompetent shooter… We are really in trouble, let’s hope this guy doesn’t wound a buffalo.

The next day we left African Maximum Safaris at Woodstock Farm, and headed to Thabazimbi. There we would hunt on a property not far from the border of Botswana, one with the romantic name, roughly translated from Afrikaans as, Scent of Spring.

The hunt Jim and I booked months before was a cull hunt for four, two each of Cape buffalo cows, ideally those too old to breed. We would be accompanied by our two PHs, our two trackers and a tracker from the property where we would be hunting. He would help to identify an individual cow that could be taken without endangering any other animals in the herd.

When I began writing some years ago, a fellow hunter and long- term respected friend told me almost as a directive, “Kim, you must always tell the truth.”

In this case it would be easy to use artistic license when recounting the facts of a hunt, especially when all does not go according to plan. 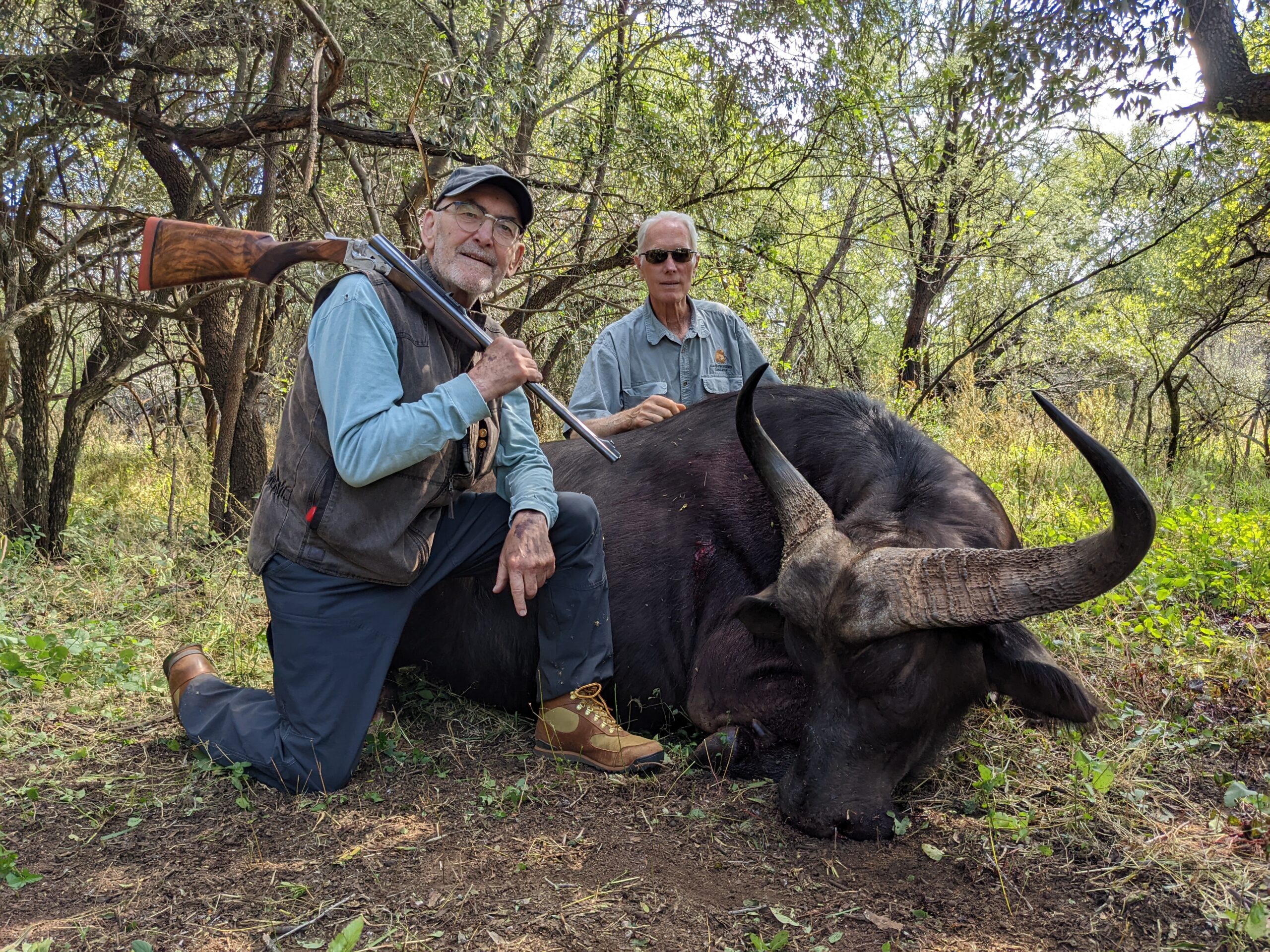 Jim was on a bubble our first morning, but it didn’t take long to realize buffalo in a high-fenced area, even one of approximately 1,000 acres, are more skittish than fair-chase buffalo. Many stalks over the first day yielded only filtered views of various buffalo through the thick acacia bushveld. By late in the second afternoon they were even more difficult to find.

Suddenly, T.J. rapped on the hood of the Toyota bakkie. He pointed to the right of the vehicle, at a dark spot approximately 60 yards away, indistinguishable to me from any other dim shadow. Hi whispered, “Cow buff, let’s go.”

I stayed with the vehicle as Jim, Arri, T.J. and our local tracker tried to maneuver through the thick brush, closing the gap on the old cow. She shifted, disappeared, appeared again, joined her small herd, began to wonder off, stopped and… at 62 yards, presented a clear shot, slightly quartering towards Jim. His .500 Nitro Express barked, followed by the unmistakable sound of a round hitting flesh. The cow buckled, stumbled and disappeared.

There was a small amount of blood, not much, but a slight trail we were able to follow forty or fifty yards before tracking became too difficult. Her prints were mixed with the others of the herd that bolted with her after the shot. In addition, dusk was upon us and to continue in the low light conditions could easily have compromised what spoor we had.

We resumed tracking early the next morning and, after thirty hours of tracking, found not one more drop of blood or sign of a wounded buffalo, or one in distress.

T.J., Arri, and our local tracker gave the call: “We think the buff was clipped in the brisket, initially bled when it bolted, and we are sure the buffalo will be OK. We have done everything we can to find her, criss-crossing the concession multiple times and see no reason to continue.”

A PH often asks a hunter after a shot, “How did it feel?”

I had asked Jim, “Would you take the same shot again?”

His answer was a most definite, “Absolutely, no doubt of it.”

I had known Jim and hunted with him for almost 45 years, in trips to Canada and Alaska, California, Texas, Wyoming, Utah, Colorado, and including over two dozen hunts in Zimbabwe, Tanzania, Botswana, Namibia and South Africa. Many of the African hunts were for dangerous game. Never had I ever seen Jim miss. He has hunted many species with a custom-made flintlock, a single-shot handgun, and many large-caliber rifles, both single shot, bolt action and double barrel. I’ve never seen Jim muff a shot, he is just too careful, too much a seasoned hunter, and too responsible.

As you can imagine, Jim felt horrible, but was comforted by knowing the buffalo would be OK. However, I had a surprise in mind that would make him feel better.

We returned to Woodstock where Jacques had kindly arranged a hunt on a nearby cattle ranch of many thousands of acres.

With a new area to hunt, and many undisturbed buffalo, this was my possibility for redemption.

T.J.’s hawk-like eyes picked up the slight movement and dark shapes of buffalo cautiously sifting through a small clearing. We eased off the bakkie, and moved diagonally to the slowly drifting herd. T.J. whispered. ”Just over 60 yards to the old cow on the far right.” I could clearly see the protruding hip-bones and prominent ribs of the cow he was pointing to. We set up the shooting sticks, moving them again to clear some low-hanging branches, and again as the cow eased past a few bushes, and once more when she finally stopped and stood broadside. 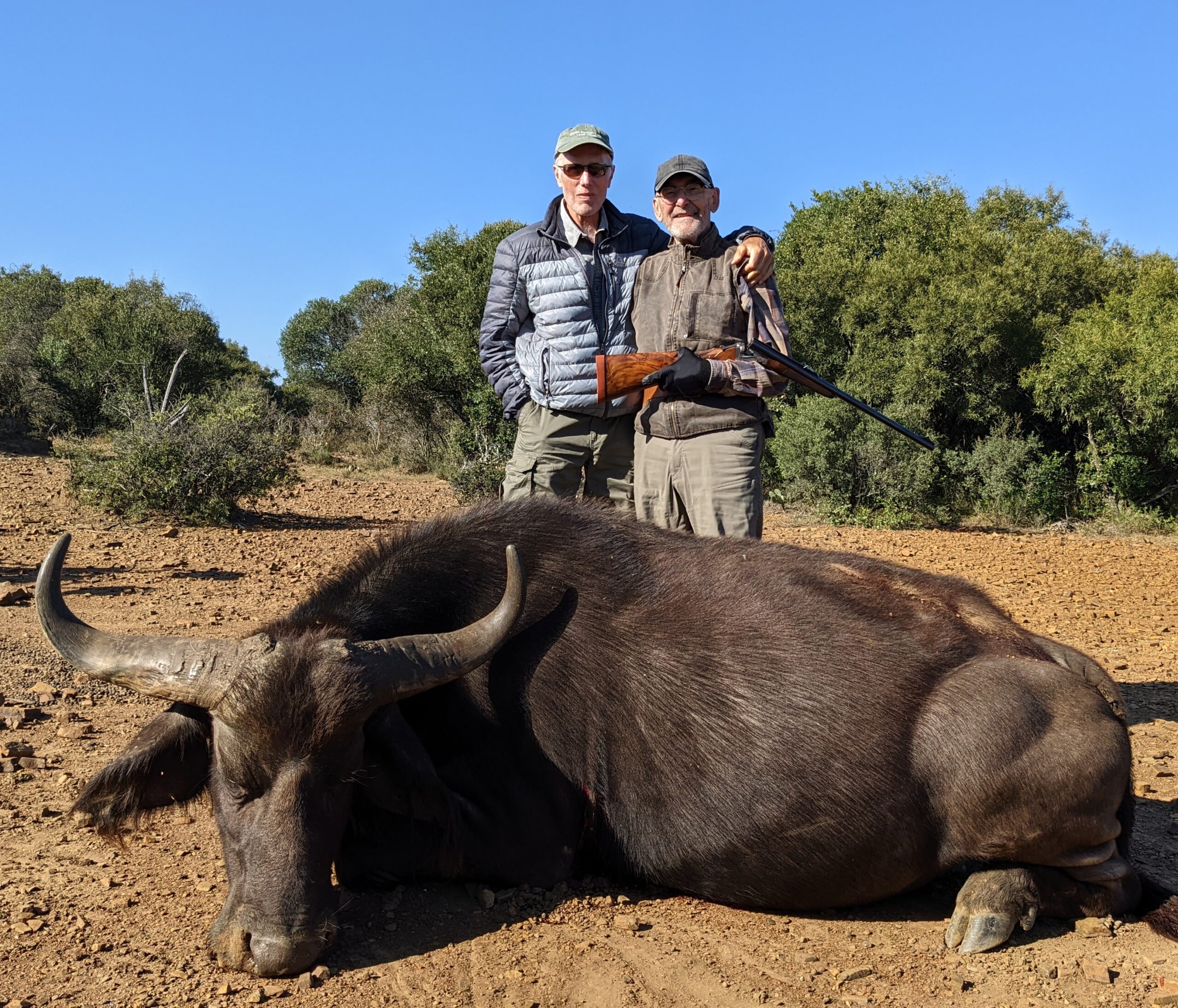 I was shooting a single trigger over-and-under .375 by Chapuis. The rifle felt as comfortable as an old golf club when I slipped it onto the shooting sticks and squeezed the trigger. T.J. reacted like a lottery winner. “Nice shot, wow, nice shot!” The cow was down within a few yards from where she stood, and a follow-up shot was probably not necessary, however, always a safe bet.

If T.J. was excited, I was secretly elated. Why my shooting at the range a few days before was so bad, I’ll never know. The feeling of making a clean shot on a buffalo of any age is like casting the perfect fly. So many variables have to come together: distance, wind, cover, noise, nerves and an accommodating-target.

Jim was on a high again. Another new area, and a different challenge. Jim was to take a buffalo that was, according to the landowner, “Cheeky.” In a multiple-acre, high-fenced area with thick bush, one single animal is difficult to locate, stalk, and successfully shoot.

Thankfully, Jim’s hunt ended well. Even with our two PHs and a tracker, it was a challenging half-day event in the thickest bush and on the hottest day we had experienced.

The surprise I mentioned earlier was a birthday gift for Jim. He was in the dark, but our two PHs were not. Although Jim had hunted his two buffalo, T.J. advised him to keep his rifle with him as there might be an opportunity to shoot a warthog, if we were lucky. The trap had been set!

We arrived at the same property where I had taken my buffalo some days before. After a few hours of driving and covering areas of the large farm we had not previously scouted, we spotted fresh buffalo spoor and eventually saw the filtered, dark and dusty colors of a small herd slowly drifting through the bushveld.

Jim’s casual attitude was not one of a hunter ready to stalk and shoot a Cape buffalo. In his mind, his safari was over, and he was along for the ride, basically on vacation. As T.J. and Arri slipped Jim’s rifle out of the case, I leaned over and said, ”Happy birthday, this buffalo is yours.”

I had to repeat it, not because of his hearing, but because he just couldn’t believe what I was saying.

“Yeah, Jimmy, you’re hard to buy for, so for the guy who has everything, how about hunting another Cape buffalo?”

Many of us save for years with the goal of visiting Africa to hunt a Cape buffalo, hoping for one successful safari. Jimmy had the opportunity to hunt three, and my gift of the last buffalo couldn’t go to a more deserving friend.

With new purpose and a morning shot of hunter’s adrenalin, Jim, T.J. and Arri slowly eased off the truck and into the bush. The wind was favorable and moisture from the morning dew softened carefully placed footsteps on the grassy approach to the buffalo.

When the scenario of two seasoned PHs and a confident hunter come together, the ending is like that of a well-rehearsed play. Jim’s hunt ended successfully, taking the buffalo at 35 yards. It was down cleanly, all hands were safe, and the curtain of our safari closed with our small audience silently acknowledging a very positive ending to our, “Triple Deuce Safari.”