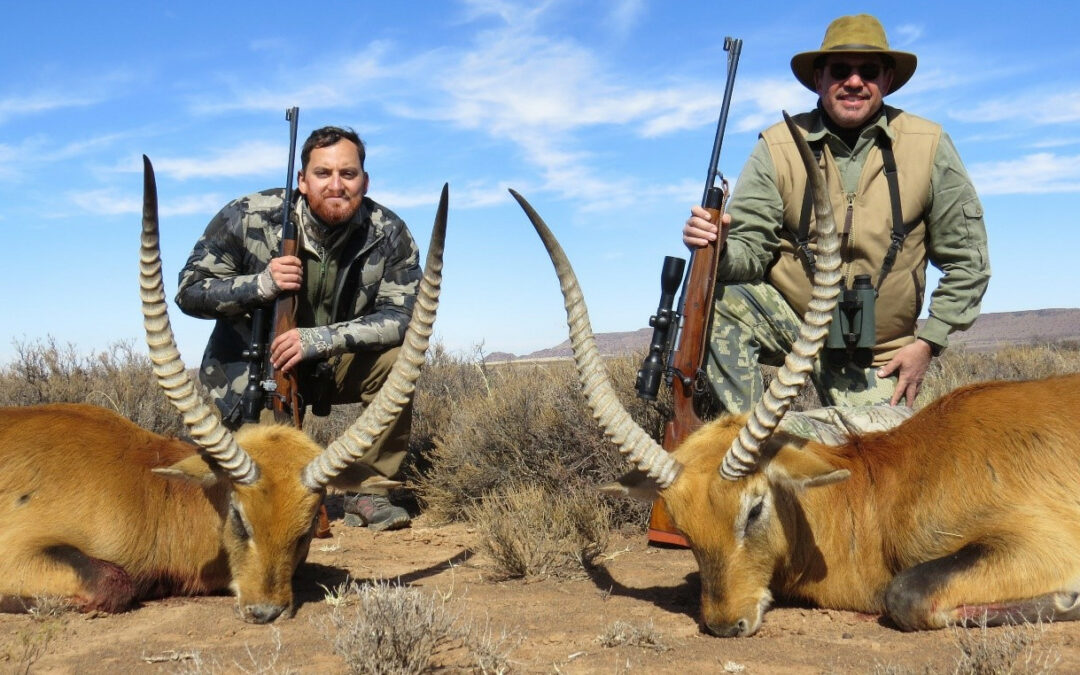 After another great Zambian Safari in 2016, we set out to try a new African country to hunt in 2017 with news species to chase after. Our friend, Richard Louw, who had recommended Hunter’s Namibia years prior suggested another Farm, this time in his backyard – a Farm named Ratelfontein in the Greater Karoo. The Farm is owned by Jan Pickard – a prominent South African businessman. Mac, my youngest son was my hunting partner for the third straight year; however, this year was going to very special with my two older children and their partners travelling to South Africa during the same week Mac and I were hunting. My eldest son and his wife were going to Phinda on a photo Safari while my daughter and her then fiancé, were going straight to Cape Town for R&R and to scout the restaurant scene. After our Hunt, all six of us planned to meet in Cape Town to celebrate my daughter’s birthday and then travel to the wine country together – a truly memorable family trip.

My other hunting partner, Manno, had been to South Africa many times and had hunted several Farms. Once at Ratelfontein, it was clear that Manno, Richard, and Jan Pickard had a common network of business contacts – this made for a very comfortable personal setting. Of course, Ratelfontein was a very welcoming place itself with a beautiful old Homestead where we all gathered for breakfast and lunch daily – Mac’s room was in the Homestead. There was a modern guest house where Manno and I stayed. There was also a dedicated stand-alone bar where we would meet each evening for Negronis and a posh barn where we ate our dinners and then would retire to the adjoining living room and sit by the fire to share stories and finish our fine South African wines. Everything was very comfortable.

Jan Pickard was the perfect host. While I would normally “just” beat him to morning coffee, my bad for not being able to sleep, he would join me and ensure all was going well for us. Our downtime was filled with great cigars, cocktails, and amazing hunting history; all provided by Jan. Jan was an accomplished hunter and world traveler and while I was no longer an African Safari newbie and well-traveled myself, I learned a lot from Jan – clearly, he was the expert on the Karoo and would be involved in our daily plans. Our two PH’s knew the Farm well – one of them Manno and I knew from Hunter’s Namibia – supports the theory that the more you travel, the smaller the world gets. We had met Jan Westdyk in Namibia where he was Manno’s PH. Jan W had a long history with Ratelfontein and the Pickard’s – family of sorts. Jan W had his Smooth Fox Terrier with him, named Smirre – the dog was a hoot. His keen nose was most valuable.  After the client shot, he could track any game. Once located, Smirre would immediately lie next to the trophy and proceed to nap – the type of deep nap that I was envious of. Mac and I had Mynhard Herholdt as our PH. Mynhard was a real character – he had his own Farm and ran a PH school. He had a young apprentice with him, great kid, who worked his tail off. At times we felt Mynhard thought Mac and I were his appreciates too – while we were the clients, he was not bashful about telling us what to do – which we appreciated. I always like folks like Mynhard who carry a few extra pounds like me; however, don’t be fooled by old Mynhard – he was a Billy Goat who could scramble up any hill without a breather.

One species that the Farm raised was Red Lechwe – while not indigenous to South Africa, they prefer marsh like territory for both food and protection. The Lechwe is golden brown in color with a white belly and have long ribbed horns that make fantastic trophies. Ratelfontein had a marshy area that we decided to explore for the Lechwe. As I had never seen a Lechwe, it was a priority species on my list. What initially seemed a likely animal to find proved more challenging than we thought. Yes, we could spot Lechwe; however, large males were elusive. When we did locate a few together, I soon realized I was having one of those “bad” days – I had three clear shots, albeit at a couple hundred yards and missed. I knew when I missed without explanation – I needed to take a timeout and take a confidence shot. Mynhard set a plastic bottle at 100 yards, and I took three shots off the top of the Land Cruiser. I missed the first two shots by an inch or so each and hit the plastic bottle with my third shot. Ok, gun was fine, and confidence restored. Now we needed to find another large male Lechwe.

While exploring, Mynhard spotted a few male Lechwes in the distance. They were in some grass feeding in a very large rectangular shaped block of land – not in the marsh. When we spotted them, the wind was blowing hard on our backs – totally the wrong direction to make a direct stalk. Mynhard made a plan to drive a bit further out of the wind’s path and then to take a long walk around. We were along one of the long sides of the block and the Lechwe were feeding in the far corner. We drove a bit more down the long side and parked in a washed-out dirt area below where the Lechwe could see us. Mynhard, his apprentice, Mac and I jumped off the vehicle. We then walked to the near corner where we turned right and headed to the far corner facing into the wind. This was a long walk and had us walking up and down eroded ditches. At one point we even walked through a huge drainage pipe – it was at least six feet high. We made our way to the far corner – now the wind was blowing directly into our faces which was our hope. The set up was perfect – the far corner was much lower than the block’s surface, so we could literally crawl up to the edge of the land where the Lechwe were standing and lay on the slope to the surface with only our heads in view.  Mynhard took his jacket off, rolled it up and set it down for me to rest my gun. The wind was really howling – the Lechwe had no idea we were lying in position. There were two large Lechwe; the closer one about 120 yards, the next closest Lechwe a few yards behind to the left. Mynhard told me to take the one on the right – it looked slightly bigger. I took my time and squeezed the trigger – one shot and down.

The other Lechwe never heard the shot nor noticed his comrade was down. I slid down the hill, reloaded the rifle, turned around and shoved my gun into Mac’s arms – I told Mac to get up onto the slope, there was another Lechwe waiting for him. At first Mynhard looked bewildered – then he totally got the plan and took no time taking Mac to where I was lying to have a go at the second Lechwe. Mac preferred his Griffin & Howe .270. He never loved my Griffin & Howe .300 Win Mag; however, he did not bring his .270 on the walk and had no choice but to use my gun. The second Lechwe was initially behind my Lechwe; however, he had moved away from us – Mac had a shot at about 250 yards. Mac took his shot and hit the Lechwe; however, the Lechwe ran out of the open block to our left behind some shrubs. Mac and Mynhard slide down the slope and we all huddled to make a new plan. Mynhard then lead the way towards the shrubs – we could see the Lechwe moving slowly, now more than 250 yards away with the wind ripping right to left. Mynhard took his sticks and set them for Mac; I could see the wind causing the gun to sway on the sticks. This was going to be a tough shot; the wind would have made this shot difficult for anyone. The shot now ranged at about 265 yards – Mynhard kept guiding Mac – the shot hit the Lechwe – Bravo Mac! However, the Lechwe ran off again having been hit for the second time.

Thankfully the driver had been watching from a distance and had the presence of mind to start driving the Land Cruiser towards us – we signaled the driver to come collect us – we had a wounded animal and needed to finish the job. Now on the Land Cruiser, we could locate and follow the Lechwe. Further, Mac could switch guns and have his .270 at the ready. While the Lechwe was still on the move, we could keep track and easily spot his path given he had been hit twice. The Lechwe did tease Mac a couple of times stopping long enough for Mac to start jumping off the Land Cruiser; then the Lechwe would run off again. The Lechwe was starting to feel the prior shots and slowed considerably. Mynhard stopped the vehicle, picked up his sticks, grabbed Mac and only Mac from the Land Cruiser and walked towards the Lechwe. At about 125 yards, Mynhard set the sticks. Mac moved slowly and deliberately onto the sticks, took aim, and fired a single mercy shot – Mac finally had his trophy.

We loaded Mac’s Lechwe and drove back to the block to collect mine – this was not a short journey given the travels of Mac’s Lechwe plus we had the added difficulty of navigating our way back through some washed-out roads. We had the rare opportunity to lay two trophies side by side with both Mac and me in the picture – an incredible father and son moment. Mac and I have many pictures over the years with both of us celebrating one of our trophies; however, this was our only true “Twofer”.  Once the two Lechwe’s were next to each other – we made another discovery – Mac’s Lechwe had longer horns than mine! I poked fun at Mynhard; he had told me to shoot the “bigger” one on the right. Mynhard looked at Mac and said – “Mac, you have a good Dad; not only did he have the presence of mind to present you with an excellent opportunity to shoot a Red Lechwe, but he left the bigger one for you”.

Ratelfontein proved to be an extremely productive Farm. I fulfilled my objective to complete a Springbok Slam. My Copper Springbok is the most memorable – a single 340 yard shot off sticks with my G&H .300 Win Mag. Jan W PH’d for me that day. I will never forget him saying “I was not betting against you, just wasn’t betting a lot that you would make that shot”. Thankfully, Jan’s dog Smirre helped us find the Springbok. On that same morning, Mynhard took Manno to find a monster Aoudad that eluded me earlier in the week – they were successful and harvested a Gold Medal Aoudad in the kopjes. As we mixed up PH’s on the two last days, Jan P guided Mac to find a Steenbok. Jan P found Mac a Steenbok that hunters dream of – a 6 ½ inch Gold Medal specimen that Mac harvested. Our memories of Ratelfontein and Cape Town will remain timeless – full of incredible hunting and family time – nothing better.