When it is meant to be! 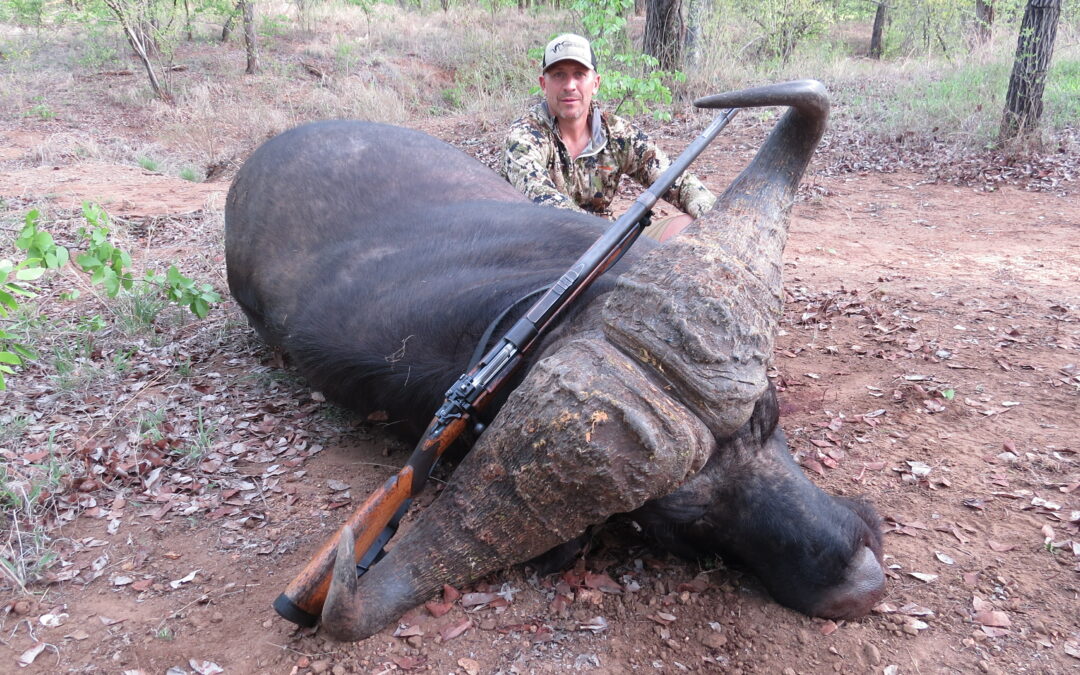 Chris and Bob from Montana have hunted with me on many occasions and we’ve always done pretty well as a team. They are the nicest people, so when Chris contacted me for a possible late season double buffalo and plains-game hunt, “of course, no problem,” I said. Having hunted many buffalo together over the years and always taken very good old bulls, the “monster buff” had always eluded us. However this has never been the focus of a safari. Chris is a guy who enjoys the hunt for what it is, and is more interested in how a particular animal is hunted rather than what it measures –  one of the reasons we have always had stress-free and successful safaris.

December is not typically a prime hunting month in Zimbabwe, as often the rains would have begun, the bush starts to thicken, and rivers start flowing, making access to some areas difficult or impossible. But at the same time it is a time of year that is so beautiful. Animals start having their young, flowers are in bloom, there is new growth of leaves, and sometimes there are spectacular electrical thunderstorms. Chris and Bob were well aware that we could spend a lot of time getting wet or unstuck from the mud, but whatever the circumstances, we would still have a lot of fun.

Humani in the Save Valley Conservancy owned by the Whittall family is one of the most beautiful places I’ve had the pleasure of guiding in, an area of riverine bush along the Turgwe and Save Rivers, mopane woodlands, malala palm forests and many kopjes. The abundance and quality of game is incredible. You can expect to see close to a thousand head of game a day, including black and white rhino, elephant, wild dogs, lion, leopard, buffalo and, of course, all the various types of plains game.

When I arrived in camp, I was told that a really big buffalo had been seen the previous day in a herd of about 100 animals. The description sounded really good, even if taking the information with a pinch of salt. A few days later I decided to go to the area where this bull had been seen, and found fresh sign of a herd literally a mile or so from where the buff had been spotted. Excited and full of anticipation we got ready, me with ammo belt, binoculars, shooting sticks in one hand and my rifle in the other.  Chris and Bob were prepared for a long morning, with Chris’s weapon of choice a .416 Remington fitted with a Swarovski scope.

Mudini, an exceptional tracker was in front and on tracks. Following a herd of buffalo of this size was pretty easy for someone of Mudini’s talent and it wasn’t too long before we heard the first sounds of a buffalo grunt and mooing in the distance. “Sound advice” as I like to call it. Making sure the wind was in our favor we took a big loop around the herd and positioned ourselves in among some rocks at a slightly elevated angle, expecting the herd of buffalo to casually and slowly graze past us. It was the right spot for ambush, as front of the herd started to slowly make its way towards us. Man, the suspense was quite something as the front of the herd passed us at no more than 40 yards, completely unaware of our presence! A couple of good bulls passed. No sign of the “monster.” Surely this is the same herd I asked myself. I thought we were going to have him, but alas he was not in this herd. Disappointing.

We were making our way back to the closest road when we bumped a bachelor group of bulls. We did not actually see any of them but knew they were all bulls just by the size of the tracks. Mudini reckoned there were five. We gave it 10 minutes before deciding to follow them. After roughly 30 minutes on the tracks Mudini suddenly stopped, crouched and pointed ahead. He had spotted movement. Swish of a tail is all he had seen. Lifting my 10x42s Swarovskis, and looking into the thick, green cover, I could only make out two bulls and neither of them was what we wanted. Trying to get a different angle to lay eyes on the others made me to give my position away, and with a loud snort from one of the bulls, the group thundered off. We continued to follow, but it was obvious they knew we were behind them as they kept running off. I called off our pursuit to give them time to settle again and we headed back to camp for lunch and a rest.

A while later we were back to where we had left the tracks, and after roughly half an hour Mudini told us to wait. He needed to backtrack a bit to make 100% sure that we were still on the same tracks, as at this point there had been sign of a herd that had moved through the area, and we wanted to stick to the Dagga Boy spoor, so working this out needed some meticulous and sharp tracking skills. Bob, Chris and I stood on a well-used game trail while Mudini did his thing.

We were having a quiet chat when something caught my eye. It was a buffalo bull, its head down, slowly walking directly towards us on the game trail we were on. It was less than 40yds away and without having to look through my binoculars I knew this was what we had been looking for. I couldn’t believe my eyes. I set the shooting sticks up, told Chris to get onto them and just wait as the bull kept getting closer and closer, completely oblivious to our presence. At roughly 25 yards the bull must have sensed something. It stopped and looked up at us exposing his whole chest and giving us an absolutely beautiful view of his horns. The mass, shape, width and drop were everything any buffalo hunter could dream of!

The silence was shattered by Chris’s .416. It was a solid hit in the centre of the chest. The bull bucked and his nose almost hit the ground at the impact of the bullet. After the shot we all kind of stared at each other in disbelief of what had just happened. A few moments later Mudini came back to where we were standing with a look of surprise on his face. As a joke we told him we’d shot at an eland. You should’ve seen his look of disappointment! A short follow-up, and again the look on Mudini’s face when he realised by the tracks that it was not an eland we’d shot. But the best expression on his face was when he laid eyes on the bull that had succumbed to the shot. What a sight!

After much backslapping and congratulations, reality sank in, and we had to acknowledge that we were just in the right place at the right time. I mean what were the chances? If it’s meant to be it will be, with a bit of effort of course. Chris had finally bagged himself a “monster” bull. A 45” bull with a beautiful shape and serious bosses.  Que seras!

Thierry Labat of Thierry Labat Safaris is a freelance, multiple award-winning professional hunter who customizes safaris for clients all over Africa to include Zimbabwe, Cameroon, Uganda, Mozambique and Mauritius. Contact him directly on phthierrylabat@gmail.com or through his website: www.thierrylabat.com for any enquiries relating to hunting safaris in above mentioned countries.